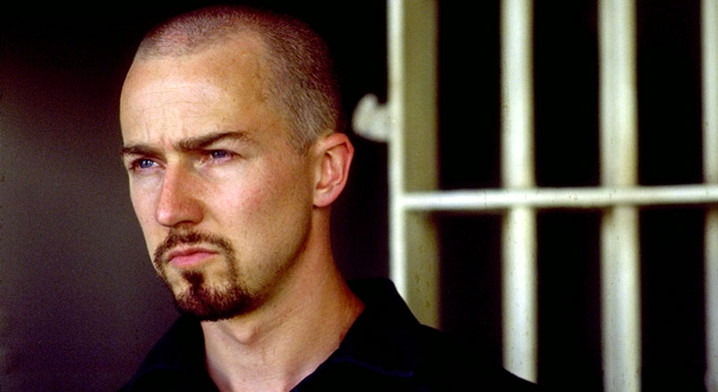 Tony Kaye’s 1998 film about a reformed neo-Nazi trying to piece together his broken life after a stint in prison has lost none of its punch since its release. If anything, it remains as shockingly relevant in today’s society as it did in the pre-9/11 world in which it first aired.

Besides the controversial subject matter, the production of the film itself lives in infamy around Hollywood. It was Kaye’s first feature film and he was so upset with the final cut that he demanded a year to reshoot it. When this was denied, he insisted that his name be taken off the credits, launching a $200million lawsuit when this request was denied. Who’s to say what Kaye’s actual vision would have looked like had he been granted the time to have his way with things?

A Guardian newspaper piece a few years after the film’s release gave Kaye the chance to explain some of his more eccentric behaviour at the time which earned him something of a black mark in Hollywood. Some more insight may be given in his upcoming documentary, Humpty Dumpty, in which he will present his own account of the background to the controversy.

Finally, the film had a modest budget and only just made a profit, being not the kind of subject matter that would attract mainstream audiences looking for a good time. There’s not a lot in this film to feel good about. The redemption that seems on its way is marred by shocking events at the conclusion. However, apart from the sheer brilliance of the central performances and the excellent script, there are a plethora of reasons to be amazed by this brutal depiction of life in contemporary America. 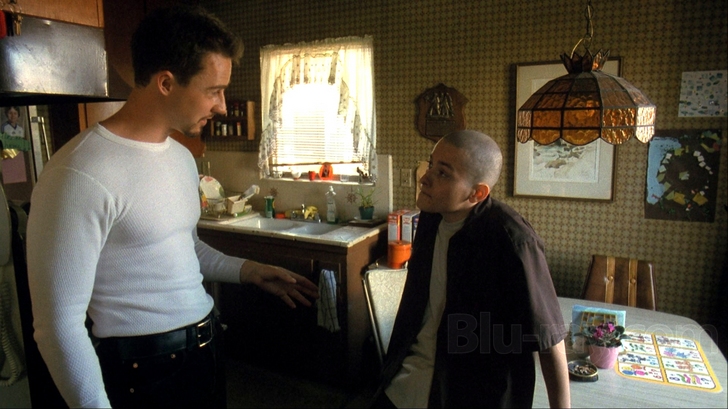 Edward Norton took on the role of Derek Vineyard after Joaquin Phoenix turned it down. Norton had been offered the title role in Spielberg’s Saving Private Ryan but was more drawn to Vineyard’s character.

For the performance he received an Oscar nomination, losing out to Roberto Benigni for his turn in Life is Beautiful. Tony Kaye was unhappy with the casting of Norton but went along with it. He was impressed by the actor’s ability to articulate his ideas and even invited him to help with the writing of the film; a decision he later regretted.

Whatever was going on in the background, on screen Norton’s performance is faultless. He never misses a beat as Vineyard and is able to convey every emotion with undeniable skill. The articulation that both impressed and frustrated Kaye is on full view in every scene, from his hate-filled speeches to his raging against the mindset he was sucked into. He really is a joy to watch on screen.

Norton’s on screen brother Danny was played with equal conviction by Edward Furlong. Furlong had burst into the world stage as the teenage John Connor in James Cameron’s Terminator 2: Judgement Day in 1991 and had built a solid reputation as an upcoming star in the intervening years.

In American History X, Furlong manages to perfectly represent everything that happens with boys who idolise their older brothers. His sibling’s reappearance after incarceration with a new world view sparks an anger in Danny that is perfectly understandable and well-conveyed. Furlong enjoyed the complex emotions of the character and this comes through in his performance. 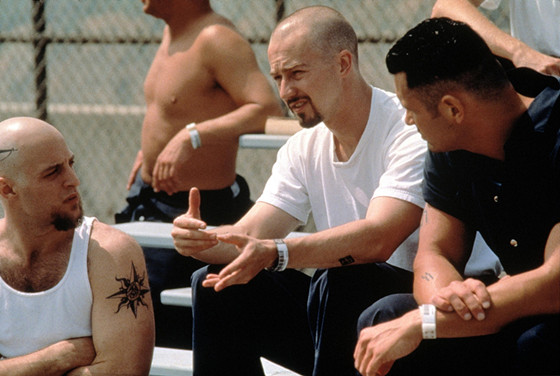 Beverley D’Angelo, Elliot Gould, Stacy Keach and Guy Torry among others all weigh in with scene stealing quality adding real depth to the story. D’Angelo gives perhaps the performance of her career as the ailing mother who has lost her husband and seen both her sons travel down a dangerous road in the aftermath of his death. The poignancy with which she is shown to be attempting to hold together her family whilst trying to maintain a little bit of life for herself in forming a new relationship is tragic.

Derek’s rejection of her new partner is so shocking in its selfishness and hate that she finally snaps and rejects her own son. This new partner, played by Elliot Gould, is also well written. Gould plays a Jewish teacher whose liberal views do not hold any weight with Derek.

The character’s naivety in attempting to talk sense in the face of such anger is portrayed exceptionally well by Gould; his ultimate resignation to defeat is also brilliantly shown as is his refusal to separate Danny’s own confusion from the experiences with his older brother.

Stacy Keach plays the leader of the local white supremacist movement with consummate sleaze and Guy Torry weighs in with a hugely sympathetic turn as Derek’s prison workmate who manages to reach in and challenge some of the prejudices that have taken root. Avery Brooks is also worthy of a mention but more on him later on.

3. The message has lost none of its relevance and poignancy 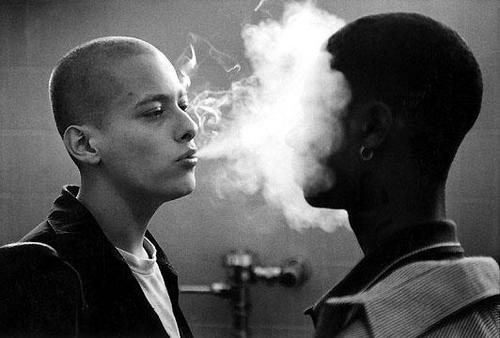 Hate is passed down through generations in the film along with the cult of blaming everything else possible for the situation around us. Derek and his brother are both highly intelligent people and yet they are both sucked into the wrong mindset which is a lesson to all on just how easy it is to convince people of bad ideology.

This message still resonates today, punctuated by horrific acts of terrorism across the globe which make it all too easy for different ethnic groups to mistrust and fear each other.

The divide that has opened between various groups in the wake of 9/11 and subsequent events is all too familiar in the attitudes shown by the characters in the film. The consequences of these divisions in our society are laid bare in the events of the film with violence perpetuating violence; hate and fear layered on top of each other until the protagonists suffocate under the weight of their ideas.

By taking an honest look at the insidious way in which such beliefs worm their way into the collective consciousness of groups of society it is possible to, if not sympathise, at least have some empathy for the reasons people think the way they do.

That helps to bring some hope of redemption and the concept that things that have been learned, no matter how extreme and repulsive, can be unlearned. If this does not bring any relief to the characters in the end, that only serves to prove that the process is not an easy one and that there are no quick fixes available. 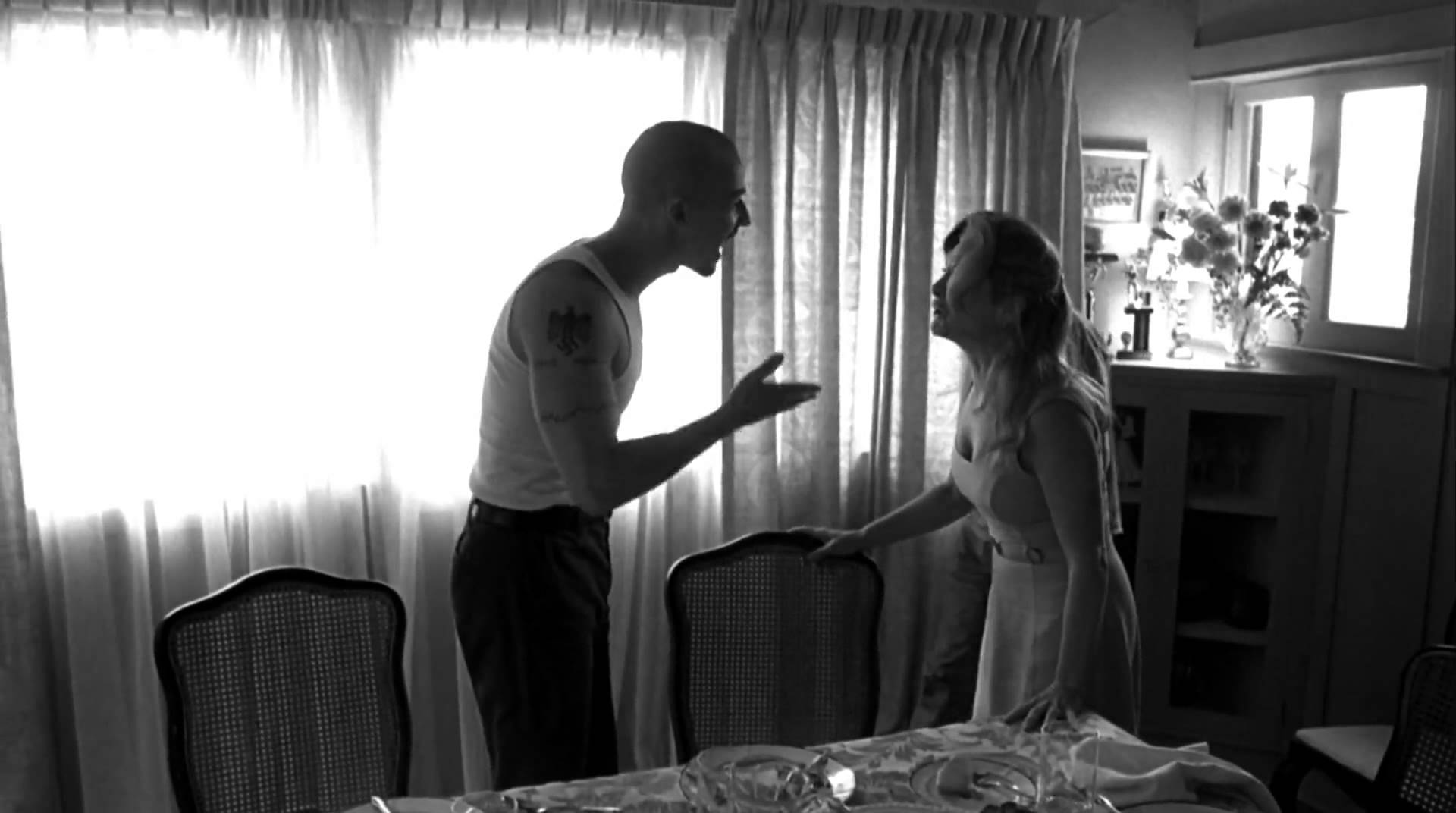 Anne Dudley, the English composer and former member of Art of Noise, won an Academy Award for her work on The Full Monty. S also worked on Neil Jordan’s The Crying Game and the lauded 2012 version of Les Miserables. Her music in Kaye’s film reaches epic and tragic highs and plays a part in confounding our responses to what is being shown to us.

Kaye told her that he wanted the music to be “big and elegiac” and she certainly succeeds in giving us that. Beyond the score, however, there is also the skilful use of background noise in the film which is to good effect.

One example of this is during Derek’s rabble-rousing speech prior to the raid on the convenience store. He speaks of his assembled crowd being on a battleground and yet, in the background, there is little but the happy chirruping of birds. The juxtaposition of the sounds and the speech make us question the validity of the message that Derek is propagating.