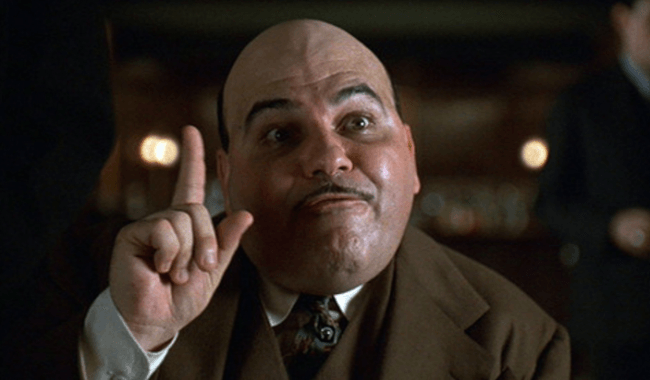 Speaking of actors, Coen brothers films are regularly graced with excellent, often very individualistic thespians. Though the brothers have a loyal army of partisans working with them, actors most definitely included, it can’t be easy appearing in a Coen brothers film and having to master a typical Coen brothers script’s kaleidoscope of moods. Those who regularly appear in Coen brothers films include George Clooney (who has directed a Coen-written script), Holly Hunter, John Goodman, John Turturro, Jon Polito (making his first Coen appearance in “Miller’s Crossing”), Josh Brolin, Jeff Bridges (forever The Dude from “The Big Lebowski”), and that grand Coen doyenne (and Joel’s spouse), the great Frances McDormand (seen in an unbilled cameo in “Miller’s Crossing”).

Perhaps one problem “Miller’s Crossing” has for many is that, aside from Turturro and Polito, the film is cast with faces unfamiliar to the Coen world. This is a narrow attitude that shortchanges a fine troupe of performers. The handsome and stalwart Irish actor Gabriel Byrne may be a bit too serious for most Coen brothers films but his character must be the calm, stable and more knowing center in a universe of unstable characters who often do extreme, if not foolish things. He is perfect for this (as is his natural accent, which the brothers hadn’t initially planned to use).

The distinguished Albert Finney had long proven to be an expert in a wide range of comic and dramatic roles in both period and contemporary pieces. The brothers had intended Leo as a role for actor Trey Wilson, who had appeared in their comic hit “Raising Arizona” (1987), but his unexpected and untimely death caused a quick recast.

Likewise, then-future Coen staple Peter Stormare was about to play Hamlet in Scandinavia and had to vacate the role written for him to J.E. Freeman (and a surprising role it is indeed). Marcia Gay Harden was an up-and-comer at the time (her future would include an Oscar and a Tony) and is also a quite often overlooked, even to this day, sensual and attractive actress.

Added to the main cast was that modern gift to the character actor world, Steve Buscemi, as well as familiar faces such as Michael Jeter, Michael Badalucco, Mike Starr, acting teacher Al Mancini and cult director Sam Raimi. This is as good a cast as ever graced a Coen brothers film, especially since none of them give a weak or lazy performance. The odd fact that many of them have yet to ever work with the brothers again (and some are now deceased or retired) may just be a sign that there wasn’t the right role or window of opportunity for their return). 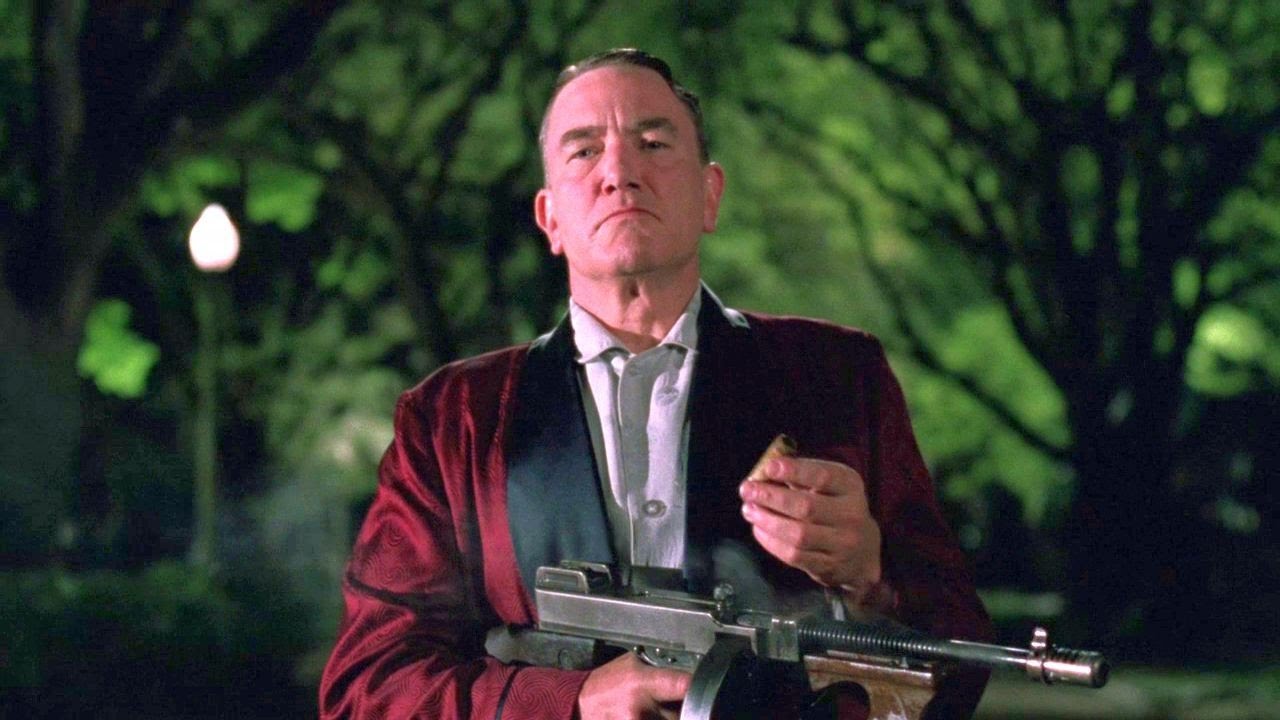 The king of Coen brothers soundtracks will surely always be the regional music rich “O Brother, Where Art Thou?” (2000), which spawned an album arguably more successful and influential than the film itself. However, many miss that a Coen brothers film is pretty much always blessed with fine soundtrack. The “Miller’s Crossing” soundtrack is certainly no exception, containing both original pieces and period music (lots of jazz but traditional Irish airs as well, which also inspired the original compositions).

The new pieces were written and the traditional ones orchestrated by Carter Burwell, a much awarded (though, sadly, no Oscar as yet) composer who supplied the third of his 15 scores to date for the brothers. (Irony of ironies, “O Brother” was one of the two Coen brothers films, along with the folk song world film “Inside Llewyn Davis”, not to require his services.)

Burwell is an expert in following the brothers’ moods and feelings (no small feat) and in adapting to the music that would fit the individualistic and idiosyncratic worlds of the various films (and he is also a favorite of filmmaker Todd Haynes). One nice touch for this film was the use of Irish tenor Frank Patterson, who appears onscreen as well as lending his voice to the soundtrack. As is the case with the Coens’ work, another memorable touch.

6. The Look is Essential 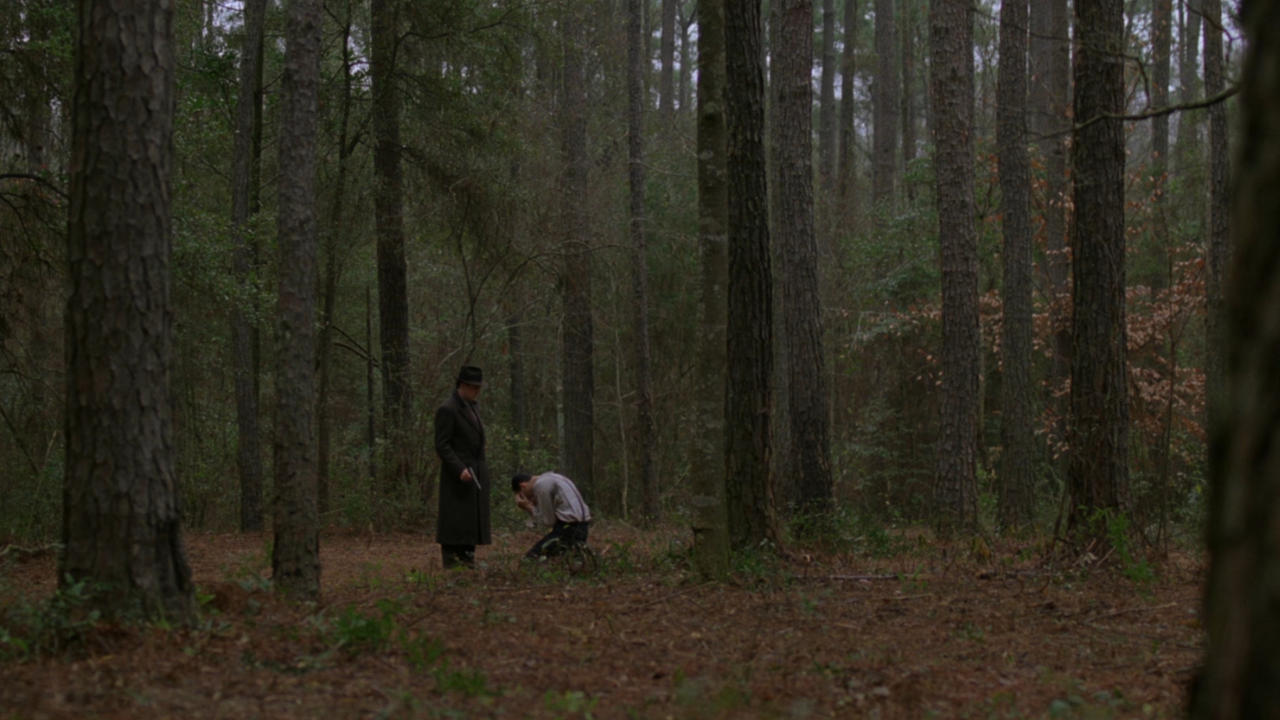 While there are filmmakers who concentrate on such aspects as acting or dialog or editing, the majority of the great (and lesser) filmmakers take great pains with the look of their films. The look (and “feel”) are very often essential to creating the world and worldview the maker is trying to convey (yes, mise en scene, for those in the know).

The Coens are certainly no exception, though often this component of their films seems to get overlooked. However, if one thinks on it, each film convincingly presents the milieu needed to ground the brothers often fanciful concepts and mercurial moods in a reality of sorts, if not the actual thing.

“Miller’s Crossing” is far from an exception to this rule and the look and feel are quite essential to this film, which is a period drama set in a very specialized world within that period. Those responsible for the look of the settings include production designer Dennis Gassner, art director Leslie MacDonald and set designer Nancy Haigh.

All of these people, now distinguished names in their fields, were early and frequent collaborators of the Coens and it may be said that this working relationship kickstarted their careers. Added to this is the fine work of the ornate costume designer Richard Hornung. Even those who may not have “gotten” “Miller’s Crossing” have given the film its due as visually rich and convincing.

One day someone should really write a study of how many great (and near-great) films had a rough, if not disastrous, start with the public. Sometimes it seems as though every film worth talking about had such a beginning. The Coen brothers filmography, as noted, seems to be more prone to this phenomenon than most. Given the drubbing it initially received, who would ever have thought that “The Big Lebowski” would enjoy the status it has since achieved? Even “No Country for Old Men”, the most honored Coen brothers film, stirred controversy due to an ending which took the public years to understand/adjust to/accept.

The year 1990 doesn’t seem that long ago, though at the time this article was written it is more than a quarter century in the past. Looking at the film today, its virtues are rarer and stand out more clearly than they did at the time. Only such individualistic filmmakers as Joel and Ethan Coen could have mounted such a film, even then. In today’s film world, it might well be an impossibility.

Certainly, many of those who contributed so greatly are deceased, retired, or past the age where they could viably participate in such a film. “Lebowski” had wild comedy/satire on it’s side and “No Country for Old Men” was unique and solid until its ending surprised most of the audience. “Miller’s Crossing” is more solidly dramatic than that. It may well take a good deal more time until the film’s virtues are more widely appreciated. That’s one of the great things about film: it can endure, even if its creators can’t.