4. Stunning Imagery Socks the Point Across

It’s all well and good to have bold and unusual ideas, but if one can’t properly express them then in an interesting and coherent manner, the ideas stay within the realm of good intentions. This is not and has never been an issue for David Lynch. As pointed out, he began his professional studies thinking of becoming an artist (which he also was and is).

Thanks to this, he knows about visuals (which is also true of many of film history’s best visual artists who similarly had backgrounds in art, art history, architecture, and/or similar disciplines). As pointed out, right from the opening frames, “Blue Velvet” uses every shot to create the texture of the tale Lynch wished to tell and in the manner he chose for expression.

To begin, Lynch was able to shoot the film in an aspect ratio of 2:35 to 1, the ratio associated with films of the classic Cinemascope era of the 1950s and early 60s.

This ratio had fallen a bit out of favor in the 80s when production companies (in the days before letterboxing and current TV dimensions) were producing films made in significantly less wide ratios with an eye toward TV and cassette sales (it goes without saying that “Blue Velvet”, like any other well-made widescreen film, should never be seen in a pictorially-compromised version.) This ultra-wide canvas is a favored artistic shape throughout art history and enables Lynch to spread out his careful compositions and images in a most potent way.

And what images! Lynch has the eye of a genius for finding people, objects, and happenings that point out the oddness living with the ordinary. Dorothy’s apartment could have just been a dingy space in a drab building (and the building was quite real), but in Lynch’s hands it becomes a lair out of the subterranean consciousness of the main character, a place of mythos and danger. Contrast this with the ‘normal’ homes of Jeffrey and Sandy’s families.

Lynch has purposefully made them virtually identical (and even made the ladies of the homes virtually interchangeable) and mundane to a degree that goes into the surreal. No homes are ever this normal, are they?

He also shines in using the real town of Wilmington. Many were sure this had to be a carefully rendered set and surely the real town has more up-to-date patches, but there were more than enough places stuck in time for Lynch to discover and frame to unreal perfection. The fact that such evil is taking place amid a setting so mundane that they cross the line into the unreal is a large part of the film’s texture.

At the end of the film, there is a montage showing the images of the opening in reverse. On the one hand, the return of the familiar images promise that normalcy has been restored, but on the other hand, the evil that lurked behind those images still has a potential foothold in this “happy” little hamlet. Many think that the image of Sandy’s long wished-for robin, which lands on the windowsill of Jeffrey’s house at the end as the families are preparing their cookout lunch together, is a bit sappy.

However, those viewers fail to note the bug the robin is holding in its beak, much like the bugs fighting under the ground near Jeffrey’s father near the beginning. The robin may be pure but the bug, the locus of evil, is still there. One wonderful thing, among many, is that “Blue Velvet” is filled with such original and telling images.

5. The Soundtrack as a Perfect Complement to the Visuals

Film is, by its very nature, a visual medium. However, unlike, say, a painting, it is also, at least since 1927, an aural medium as well. What the viewer sees is, of course, quite important, but any decent filmmaker knows that what is heard in relation to what is seen is at least equally important. What is heard can greatly enforce or tellingly work against what is being shown on screen. It’s no surprise that as complete an artist as Lynch, despite being so visual, also knows the value of what is heard.

Any Lynch project is alive with sound, and it is no fluke or coincidence that the film’s sound designer, Alan Splet, earns such a prominent place in the film’s credit sequence. Lynch let it be known that he considered Splet an important collaborator, which comes out in the film in a variety of ways, right from the opening sequence.

As pointed out, the soundtrack opens with a saccharine old pop hit making ironic comment on deceptive visuals, but when the scene switches to the warring ants, the soundtrack zones into the noises of their battle and amplifies it to an almost deafening degree. Much later in the film, Jeffrey’s nightmarish visit to Ben’s lair is highlighted (so to speak) by the host’s bizarre lip-sync rendition to Roy Orbison’s “In Dreams”.

It becomes apparent that this performance also taps into something deeply disturbing and personal for Frank (never explained). Thus the wild visuals of the effeminate Ben, singing in the makeshift spotlight to the impossibly and inappropriately (under the circumstances) Orbison vocals, fuse to create an unforgettable moment.

Likewise, in another key moment in the film where Sandy relates her dream of the return of the peace-bringing robins, a Lynch-penned song (along with composer Angelo Badalamenti), appropriately titled “Mysteries of Love”, plays in the background with the lyrics wonderfully rendered by ethereal songstress Julee Cruise (a Lynch favorite).

This song is brought back at the film’s climax, continues into the lunch scene at Jeffrey’s home, though Dorothy’s reunion with her son (though, tellingly, briefly interrupted by Dorothy’s singing a few important bars of the title tune) and through the closing credits, all creating the dreamlike mood that Lynch was trying to achieve.

Added to this are the surreal and amplified sounds under such scenes as the one where Jeffrey finally gives into Dorothy’s horrible request to be hit, and the whole things adds up to a great surrealist contribution to the film.

6. A Great Cast is Always Worth Repeating 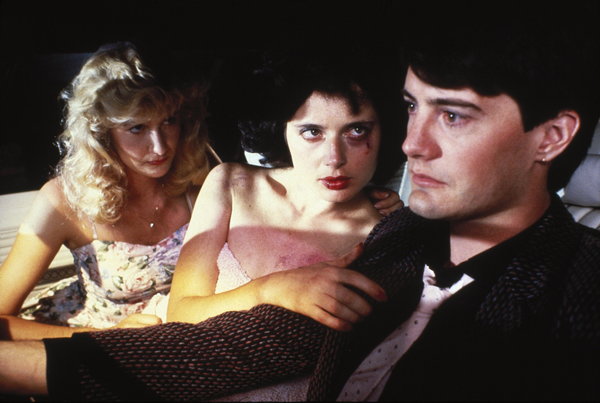 Like a later star director, Quentin Tarantino, Lynch is an adventurous soul in his casting of actors for his films. If anything, though, he has an even sharper eye and always seems to know just exactly who belongs in every role. As with Tarantino, Lynch casts exciting newcomers along with veteran actors, sometimes stars of times past, who carry cultural associations (it’s quite telling that he has never cast anyone who could be considered a big star at the time of any film’s production).

“Blue Velvet” is a most felicitous example of Lynch’s casting abilities at their best (and really, the first film since “Eraserhead” that he was allowed to fully cast and the first ever where he could afford to cast name actors himself).

The actor many remember best from the film is Dennis Hopper. He had been in the industry since the 1950s (co-starring with friend James Dean twice), but he’d been… uh, on a trip from the mid 1960s until the early 80s. Even seeing him in such notable films as 1977’s “The American Friend” and 1979’s awesome “Apocalypse Now”, one realized only part of him was there (and most of him wasn’t in his iconic film 1969’s “Easy Rider”, which he also wrote and directed).

By the time he made Blue Velvet, he’d cleaned up his act and was ready to return to serious work. His unforgettable and deeply scary Frank put him back on the movie map (though, typically, the Academy, which found the film distasteful aside from Lynch’s Best Director nomination, nominated him for a lesser performance in that same year’s “Hoosiers”).

Equally impressive is Isabella Rossellini. Always famed as the daughter of famous actress/movie star Ingrid Bergman (of whom she looks like a darker version), she had been acting for a few years before this film (taking time out in her marriage to Martin Scorsese for a while), but she had yet to have an acting breakthrough.

Seeing the film today, viewers may not realize that taking such a bold and daring (and potentially embarrassing) role would be risky for any actress, but for one without an already-established image, especially so. Her committed performance is, therefore, truly commendable (and she won the director’s heart for awhile as well).

However, though these two performances are notable, it’s easy to forget the quieter characters. Lynch had discovered MacLachlan for “Dune” (which failed to make him a star) but knew that his bland good looks paired with his boldly quirky (and finely comic) acting would be perfect for the callow but easily corrupted and redeemed Jeffrey.

Laura Dern is also a perfect, if quirky, all-American girl (unsurprisingly, she and MacLachlan got together for awhile as well). Past all of this are the interesting types which fill out this and all of Lynch’s films.

Though Stockwell had been an actor since childhood, he had faded since his late 50’s-early 60’s heyday, and though Lynch had also cast him in “Dune”, his big scene here also brought him back. Added to this were familiar faces such as Hope Lange and Brad Dourif (former Oscar nominees here in small but appropriate roles), and Lynch favorites such as Jack Nance and Frances Bay (both sadly now deceased). Though one seldom focuses firstly on the acting in Lynch films, the casts are always impeccable.

7. Dreams on Film – the (Il)logic of Lynch’s Universe

One big sticking point for many with regards to Lynch’s films (and the delight of them to others) is the fact that the plots often make no logical sense. The thing many miss is that… well, they aren’t supposed to make that kind of sense. Lynch is quite likely the foremost surrealist filmmaker alive today (though some will hold out for Alexandro Jodorowsky)

. It makes sense that he wouldn’t care to make linear films, though some insist on holding out for such an occurrence (though this may be a moot point, since he hasn’t made a film since 2009’s self-financed “Inland Empire”, and despite restarting his TV series “Twin Peaks” in 2017, he doesn’t appear to be coming back).

A moment in 1992’s “Twin Peaks: Fire Walk With Me” tells quite a bit. When a long-missing character (played by cameo performer David Bowie) turns up briefly, he says, in a moment of confusion, that it’s all a dream.

Looking at later Lynch films like 1997’s “Lost Highway” and 2000’s “Mulholland Dr.” (brilliantly adapted from a failed TV pilot!), it can only be explained as having dream logic. “Blue Velvet” may look more realistic than those efforts and may have what seems to be a more literal plot, but a little careful consideration would tell any viewer that this is not at all realistic.

This is a dream on film, like most good films. A dreamer has put this film together and the world can see his dream. Many would agree that Lynch is one of the great dreamers in film history, and it’s a privilege to have him share those dreams.