Released in 2003, the movie follows the life of a Buddhist monk, taking place in a monastery in the middle of a forest. We follow him as he grows up while the story divides the moments of his life using the seasons.

As the name of the film suggests, “Spring, Summer, Fall, Winter… and Spring” is divided into five parts and, according to these seasons, we follow the novice Buddhist – played by Jae-kyeong Seo (boy), Young-min Kim (young adult), and Ki-duk Kim himself (adult) – while he grows up in this monastery floating on a lake.

With an 8.1 rating on IMDb and 95 percent fresh on Rotten Tomatoes, those rates do not begin to describe the masterpiece that “Spring, Summer, Fall, Winter… and Spring” really is. Although the approach on Buddhism, Kim’s masterpiece is about growth, and therefore about all of us.

It is never too late to remember that this article might contain spoilers. So, here are six reasons why “Spring, Summer, Fall, Winter… and Spring” is a masterpiece that every film buff should see. 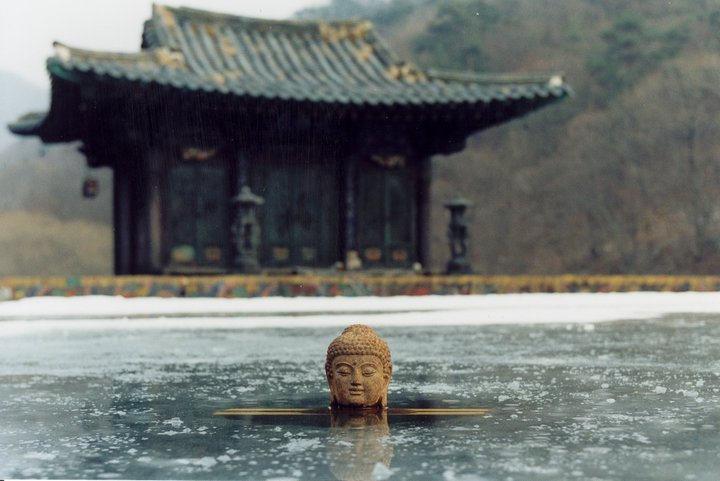 One of the most important aspects of filmmaking is the proper choosing of where the scenes will take place. When thinking about locations, as director Sidney Lumet (“12 Angry Men”, “Dog Day Afternoon”) has said, the locations are characters in his movies, and in this one it’s no different.

If you move this story from the monastery that appears to be far from any modern civilization (as we see the mother and daughter that appear with modern articles of clothing, a hint that it takes place during modern times), and move it to a big city or even somewhere that does not involve a floating monastery, this tale will lose a lot of its strength.

5. The apprentice must become his own master 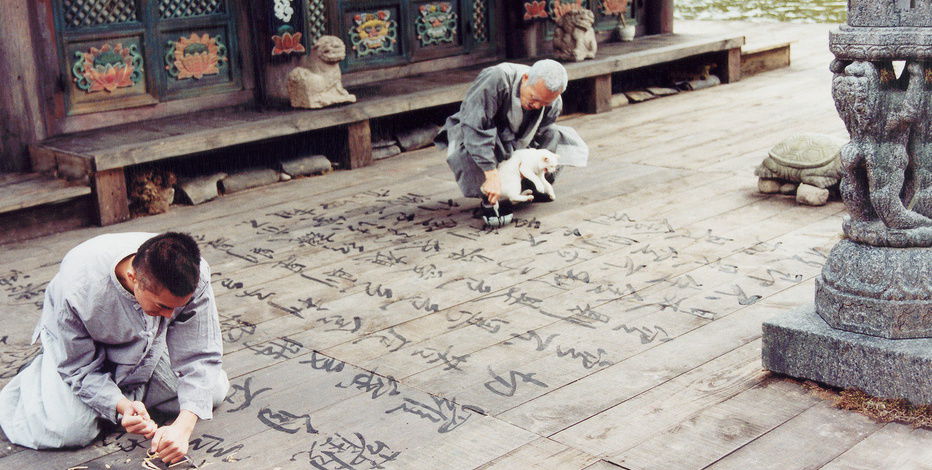 In the end of “Summer”, the young monk, despite the recommendations of his master (“lust leads to desire for possession and possession leads to murder”), runs away from the monastery to pursue the girl he fell in love with. The apprentice comes back in the “Fall” after murdering his wife.

The old monk anticipates the novice’s return and when he finds his apprentice in the middle of a suicidal rite, he beats the young monk and says he cannot leave this world this easily. Later, two detectives take him from the monastery and the old monk, knowing his story is coming to an end, builds a pyre and his life is taken by the flames.

In the “Winter”, the apprentice that is now an adult comes back to the monastery that was left with nobody in it. He makes a Buddha statue with ice, starts to exercise in the ice, and gets ready to take his master’s place.

The story closes when a woman leaves a baby that becomes this once-young monk’s apprentice. When he is able to go through all of the seasons, he is ready to take his master’s place and spread his knowledge to a new prodigy, having finally gotten control over his life.

4. Every frame a painting

To make a reference to the great channel on YouTube with the same name, this is one of the most visually stunning movies made in this century and would certainly be one of the top 50 of all time.

You are able to stop this movie at any frame and the shots, the lighting, the color, and everything else you can see on the scene is – at least – nearly perfect. The symbols used in the movie are full of references to Eastern culture and to Buddhism, and the monastery floating in the middle of the lake, surrounded and protected by the forest, is such a perfect place to make this story and those characters come to life while producing amazing imagery.

The cinematography by Dong-hyeon Baek shows an amazing use of natural light, and respects the natural colors as well as the place of their characters in the middle of such amazing landscapes. We can basically say that any still of this film could be framed and put up on a wall. 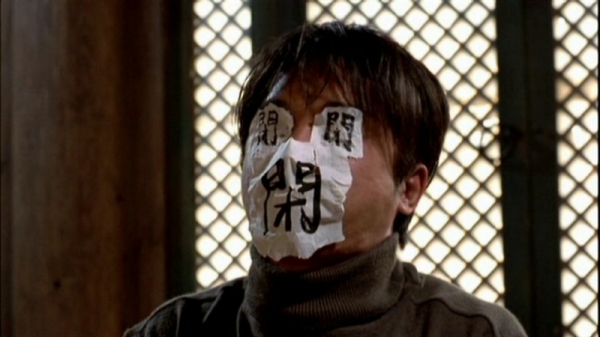 Known for movies like “Pieta” (2012) and “3-Iron” (2004), Ki-duk Kim is one of the most prolific directors of the last generation of South Korean filmmakers. Considered by most to be his masterpiece, “Spring, Summer, Fall, Winter… and Spring” is one of the most amazing directorial achievements of the 21st century.

If you pay attention to the complex mise-en-scène of the movie, you might notice that the story works visually, and the dialogue, although necessary to the story, is not as crucial as its imagery. This visual approach is something we see less and less in most contemporary filmmaking. Kim tells everything visually and it’s his great directing that allows his actors to deliver great performances in this film.

All the scenes are meaningful and contribute to the storyline, which does not have any dull moments. His control of the narrative, allied with its visual perfection, makes his work one of the most amazing achievements in film we’ve seen in the last decades.

2. The seasons are the main character of the movie

When relating the seasons to the supposed main character of the film – the young monk – we can associate these transformations in nature to the arc of this character.

In “Spring” he learns to respect the living force of nature; in “Summer” he discovers love and its dangers: in “Fall” he has to take responsibility for the evil he has done, as everything seems to be falling apart; and in “Winter” – the most difficult of the seasons – he has to overcome all the obstacles of body and mind to take the place his master left behind.

This arc could be related to Joseph Campbell’s heroic journey, as many film aficionados love to cite, but most of all, these are forces of nature that obviously influence our life cycles, no matter what we do, until we become our own masters and are able to understand and deal with the situations that we have to face as far as our time comes.

1. It’s all about the circles 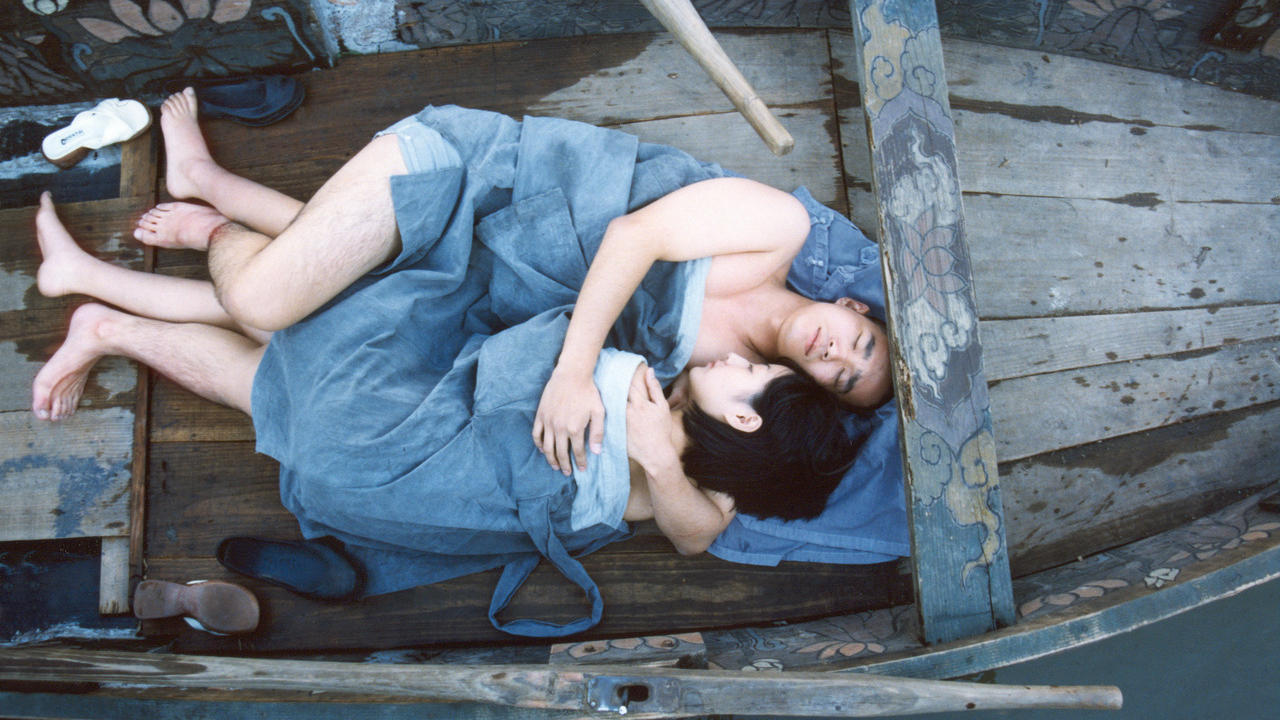 Even though “Spring, Summer, Fall, Winter… and Spring” is full of references to Buddhism, this is, most of all, a movie about the cycle of life. As said before in this article, every lesson from the respect of nature, to the blossom of love, until the hard obstacles faced and overcome by the monk to take his master’s place, are all a metaphor for our condition as human beings.

We have to learn to respect and understand the place around us, the dangers of our feelings, the discipline to control our bodies and minds for the situations we have to face. And after all of that, we need to somehow pass this knowledge forward.

This film is a claim for the viewer, no matter their religion or the place they is from, to look inside and relate to all of those seasons. But the most special part is that there might always be a way to correct things and start over, and to start better as the new cycle begins.

“Spring, Summer, Fall, Winter… and Spring” is definitely a masterpiece with so many approaches in a variety of themes that makes it so unique philosophically and visually, and therefore should be seen and never forgotten by any film fan.

Author bio: Vítor Guima is a filmmaker, writer and musician from São Paulo, Brazil. Every day he watches a movie, reads a few pages from a book, listens to an album and freaks out with the feeling of not having enough time to see everything.