“Audition” is quite a historic production (at least for its cult following), since it was the film that established Takashi Miike as a prominent member of the category and Eihi Shiina as a “priestess” of the grotesque. Here are five reasons that justify the title. Please note that the article contains many spoilers.

1. A great adaptation of a truly cult novel 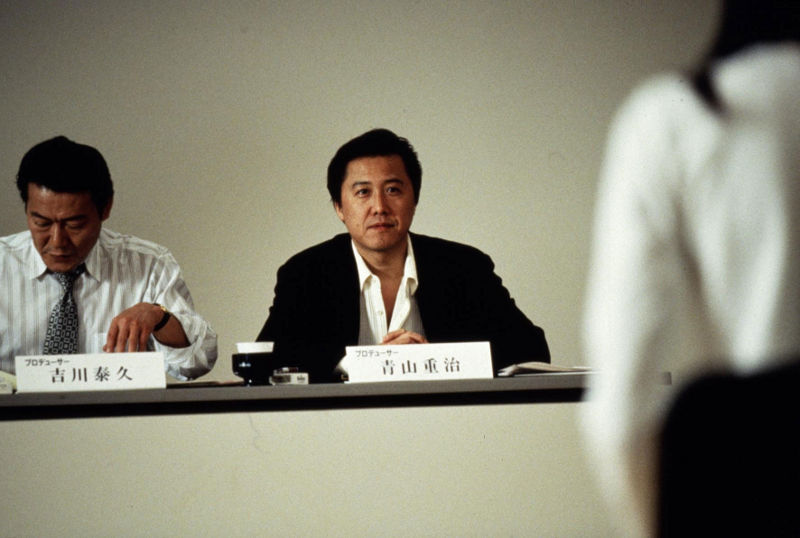 Based on the homonymous novel by Ryu Murakami, who actually wrote it as a reaction to a failed love affair, “Audition” tells the story of Shigeharu Aoyama, a middle aged entrepreneur who has recently lost his wife and has been living a disinterested life ever since.

According to the plan, actresses would supposedly audition for the role of Shigeharu’s wife in an imaginary film, although the actual purpose is for Shigeharu to find someone he can date. Many beautiful women audition, but there is only one who truly stirs his heart, a young woman named Asami Yamazaki.

She states that she is an former ballet dancer who was recently working for a music producer. Yoshikawa warns Shigeharu to be careful, since he was not able to cross-check Asami’s background, but he is already blinded by love.

2. Direction that gradually builds the horror 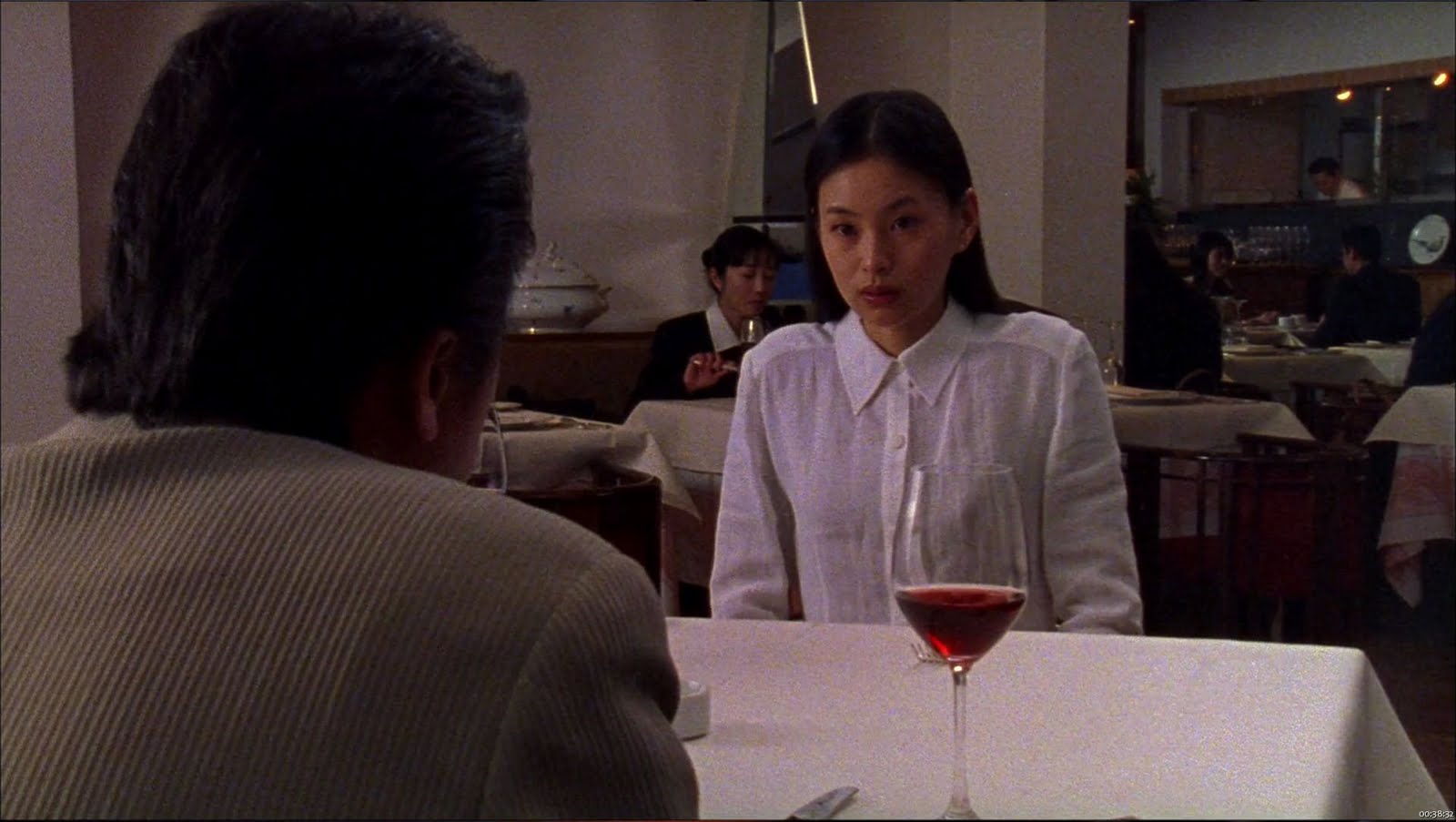 The film begins in the usual Japanese style, with hypnotic rhythm, scarce dialogue, almost no music, and permeating realism both in the environment in which it takes place as well as in the characters. The first hour, in particular, does not look like a horror film at all, but rather like an indifferent social film.

As the story progresses, though, some out-of-place images shyly make their appearance, which become more frequent as the mystery grows surrounding Asami. Particularly, the scenes with her smile and a peculiar sheet give the impression that “something” is about to follow.

What Miike does here is build the horror in a fashion that finds the audience in an almost completely unsuspecting status during the ending scene. This technique raises the shock element to unprecedented levels, heightening the sense of the finale even more and making the scene even more memorable. 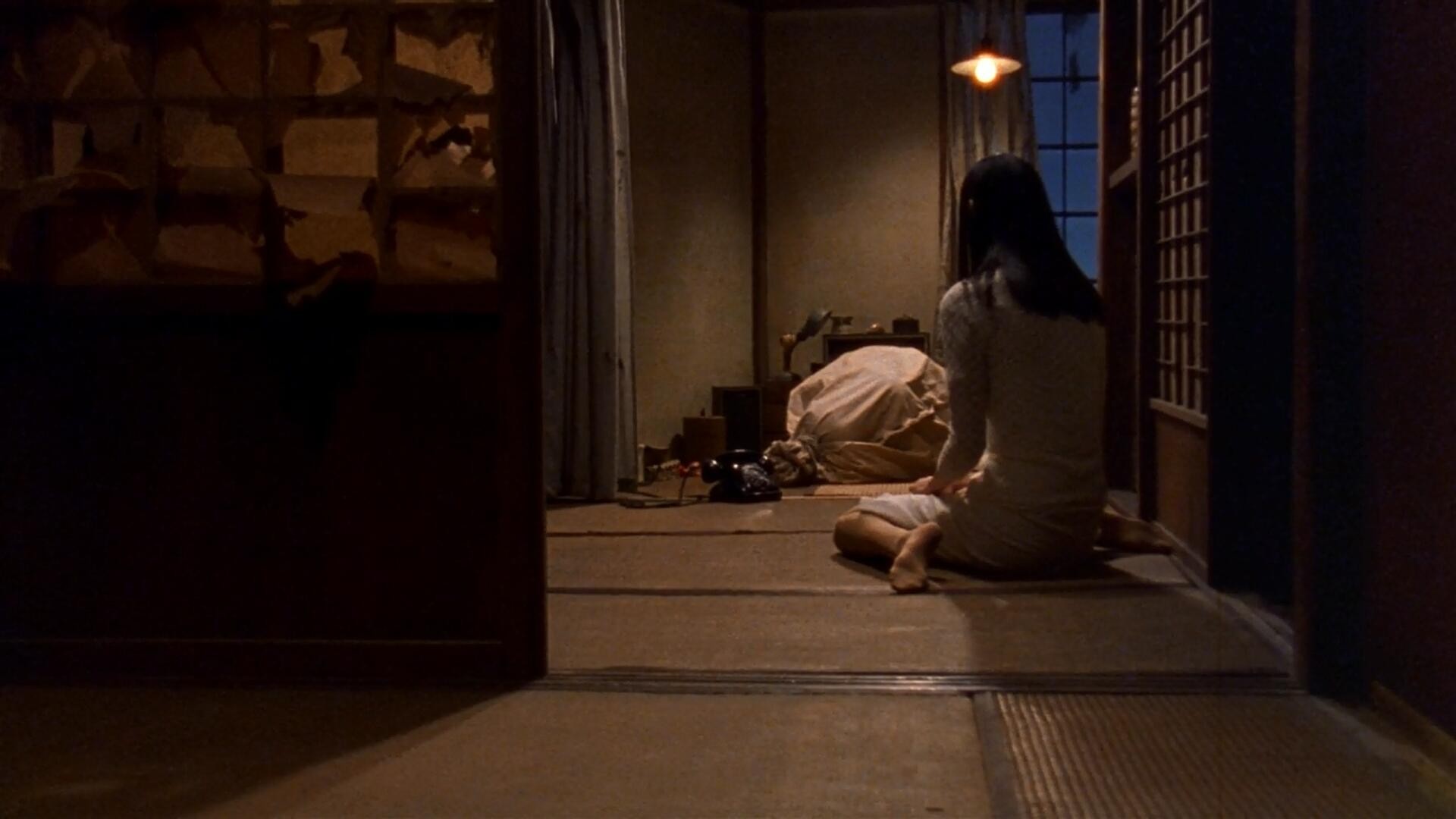 The technical aspect of the film also moves in that fashion, being highly indifferent and producing a film that mostly looks like an amateurish documentary of a man’s disinterested life. In that fashion, Hideo Yamamoto’s cinematography and Yasushi Shimamura’s editing move toward the same direction. Most of the shots in this part are either at shoulder level, are smooth panning shots as in the auditions (apart from Asami’s), or still and asymmetrical as in most scenes inside Aoyama’s house.

The lighting and the colors match the aforementioned aspects, as the ethereal, lighter colors as in the opening scene, or the dull ones as in most of the scenes where Aoyama is talking to Yoshikawa. Koji Endo’s music and Kenji Shibasaki’s sound also move in the same direction, with traditional rom/com music or even a complete lack of it, and realistic sounds that fit the general setting.

However, as the setting starts to change, the same occurs with the production values. The camera is placed low to the ground and in extreme angles, occasionally very close to a character or a wall, creating an intense sense of claustrophobia. The sound becomes hyperbolic with bizarre sound effects, which do not seem to have any affinity with what is happening on the screen. Accordingly, the music switches to classic horror style, as with the ballet studio scene.

Lastly, the colors become dark and more saturated, resembling the style of noir films, as with most of the scenes in Asami’s apartment. However, the scene that most definitively signals this change in technical style is the one with the stone fish. 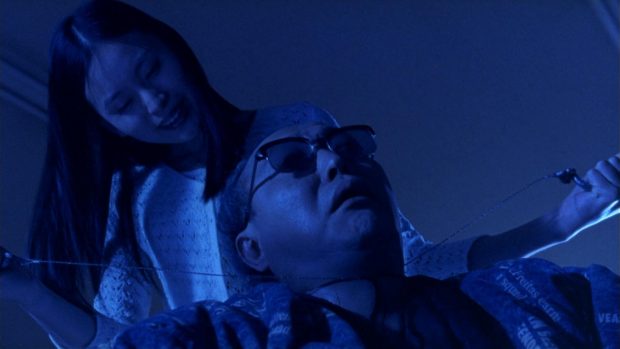 Takashi Miike took a step away from the J-horror genre that was culminating at the time with films like “The Ring (Ringu)”, “Ju On: The Grudge”, and “Dark Water” and abstained from incorporating supernatural elements in the film, instead trying to cause fear with the atmosphere and the subtle feeling of uneasiness that permeates it. Some sense of surrealism remained, but it is of minor importance.

This tactic made the presentation of the shock element and the horror much more difficult, but Miike succeeded with both, particularly through his direction, the sound, and Eihi Shiina’s acting.

Regarding exploitation and particularly torture films, the most common practice is that of the bodies of women being eroticized through sadism. Miike, though, presents a reversal of genres in “Audition”. Despite being smaller and weaker, Asami has total control of Shigeharu’s body in the final scene, as his body becomes the object of her revenge, paranoia, and sadism.

5. Fitting acting, both in the mainstream part and the exploitation one 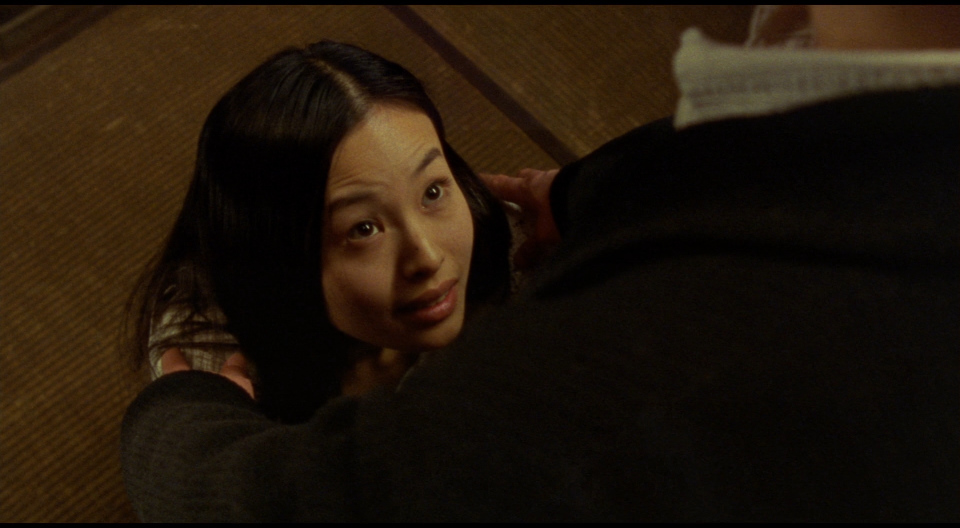 According to the film’s indie drama aesthetics, Ryo Ishibashi as Shigeharu, and the unrecognizable Jun Kunimura as Yoshikawa, act in a moderate and almost indifferent fashion. In particular, the first one manages to portray a character who, despite his shenanigans (he is actually playing with the actresses’ hopes), remains very likeable for the duration of the film. This trait makes what happens to him at the end even more awful, while exemplifying the fact that love can blind people.

The case is similar with the gorgeous Eihi Shiina who plays Asami, although she emits something peculiar despite her “innocent” appearance. However, as soon as her true colors are revealed, Shiina presents her true traits as an actor, as she personifies terror, despite her cool exterior.

In the same fashion, Ishibashi is great at portraying a man in love who cannot believe what is happening, despite all the indications of the opposite. His sincere surprise during the torture scene is the highlight of his performance.

Lastly, Renji Ishibashi as the man in the wheelchair gives a truly horrific performance, in distinct cult fashion.

6. Most of all, the torture scene at the end of the film 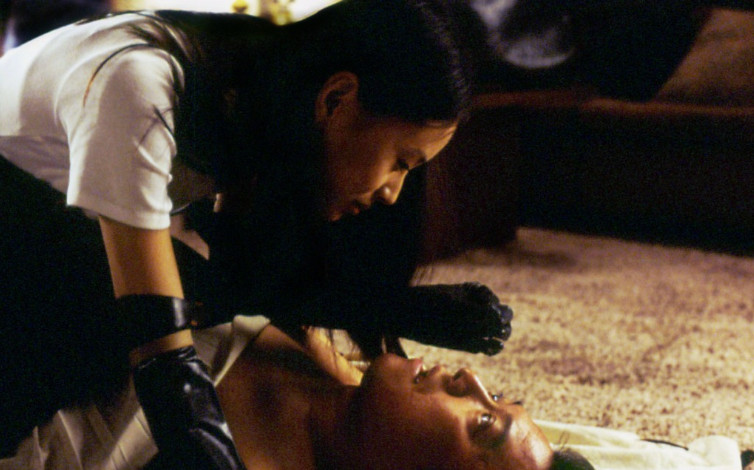 Shigeru finds himself unable to move, as Asami has injected him with a paralytic agent that still leaves his nerves alert. She then proceeds to torture him with needles, pushing them into the most sensitive parts of his body, eventually inserting them into his eyes, while she keeps repeating the words “deeper, deeper, deeper” as in an act of perverse sex. Lastly, she cuts his left foot with piano wire.

The scene is quite shocking, particularly due to the permeating realism that characterizes its every grotesque act, as well as the sound, which at times is even more horrible than the images.

The fact that Eihi Shiina looks quite beautiful while she is performing these horrendous acts as Asami, and the general aesthetics of the film, which by no means resemble anything grotesque up to that point, heighten the shock element even more.

Both the extreme fantasies of Ryu Murakami and of Miike manifested in this scene in all their glory, while Hideo Yamamoto’s cinematography found its apogee.