There are plenty of bad movies out there, but none even begin to compare to the masterpiece of awfulness that is The Room. The combination of terribleness in every single aspect and element that makes up a film makes it impossible to watch. It makes one wonder why anybody would make such an embarrassingly bad movie and what is more, allow people to sit through the torturing experience of watching it.

In 2003, Tommy Wiseau created one of the most popular cult movies whose following overpowered even the that of The Rocky Horror Picture Show, and for good reason. The movie triggered the newly born online community creating an unbelievable amount of memes due to the movie being so bad, as well as the lines from the script being quoted intensively due to their hilarity.

The movie was based on a book by Wiseau that he then turned into a script, and following which he turned into a Broadway production, which is all ridiculous in itself considering how terrible the movie is.

It follows the story of Johnny, a kind fellow who is engaged to his beloved fiancée Lisa. But a storm appears in the distance as we find out that Lisa is bored of Johnny and in turn is in love with his best friend Mark. This is a pretty cliché storyline – but what makes the movie really stand out is everything in between.

And so, here are the 5 main reasons why The Room is undoubtedly the worst movie ever.

5. The Randomness in the Plot 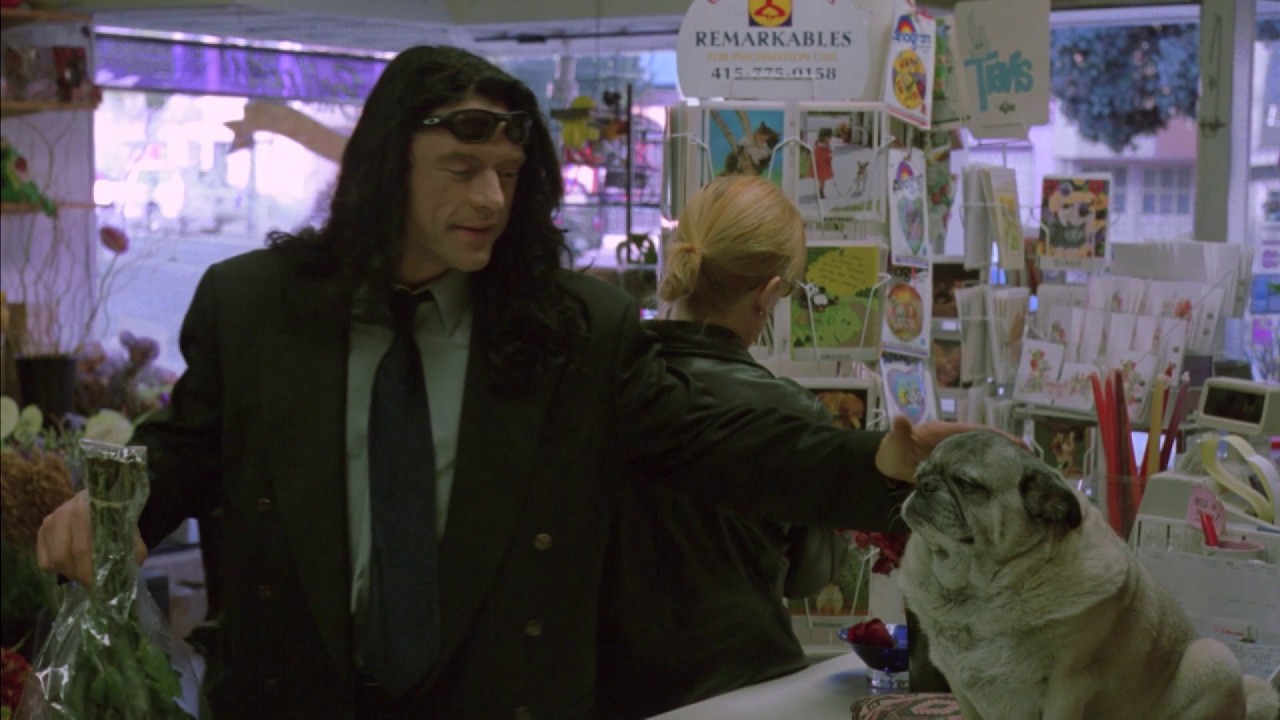 The plot of a film or any other narrative is usually, if not the essence, a vital part of a film. And although there are different ways to structure a narrative, there are basic unsaid rules that have to be abided by in order for the plot to be successful. The Room however, ignores the importance of a clearly structured narrative, despite possessing a more or less structured plot outline. The problem arises with the elements in between the main plot – or the sub-plots with a dead end.

Most of the scenes introduce a conflict or a seemingly important event occurs which is then completely scrapped away and disregarded a minute later, such as Lisa’s mum confirming she has breast cancer which is a seemingly important problem – but not only is her daughter apathetic about it, we never hear about it in the entire film again; or Denny’s problem with his drug dealer that causes hysteria amongst other characters, which dematerialises as fast as it appear – the question arises as to why such scenes were included in the first place?

What is even more random and unexplained than these plot interferences is the infamous shot of the framed spoon that keeps being repeated as the camera pans across the room. It could be argued that Wiseau is using the postmodern technique of aesthetic appearance over meaning, if only the spoon held either of them.

Because of these unnecessary and random plot additions that make no sense and carry no significance the whole movie becomes a confusing disappointment, making one feel like they are wasting their time. 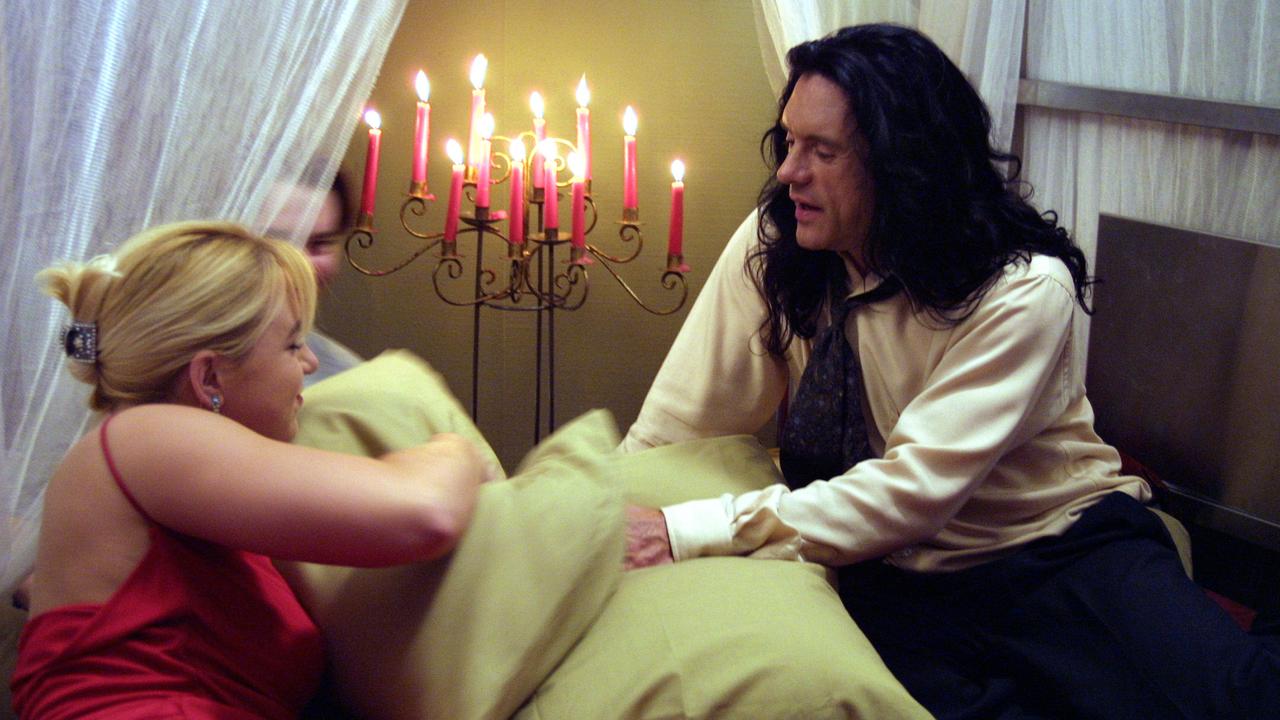 If only the movie was visually pleasing, perhaps we could forgive it for the rest of its terribleness. But unfortunately here too, Wiseau fails to reach any cinematographic standards. He confuses not only the times of the day by having a random mix up of night and day scenes making it very difficult to follow in terms of the plot’s timeline, but he also decides to give a twist to the year his story is set in.

While most of the movie follows one specific age, every time the characters go up onto the roof of the apartment block, they seem to teleport back in time to San Francisco in the 70’s. Wiseau decided that for one reason or another he is not satisfied with filming on a real rooftop which was available, and used a green screen instead, that is painfully bad and obvious.

Another questionable decision of Wiseau’s was his sex scene. To portray the moment of passion between his character Johnny and Lisa, he chose an extremely pornographic-like setting of cheesy bed curtains, roses and candles, as well as even more cheesy music to accompany the awkward act, making the whole thing look ridiculous. 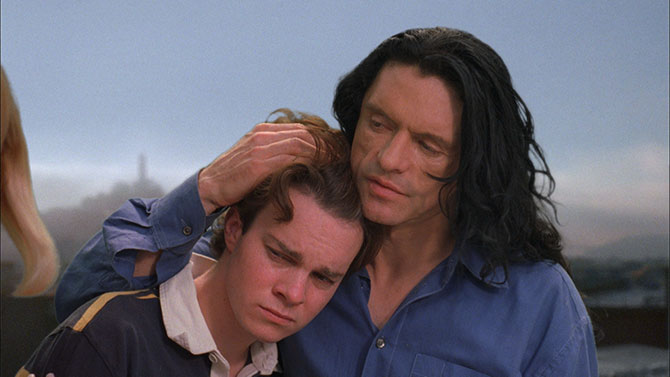 It is quite obvious is Wiseau didn’t put any effort into the other, more initial elements, there is nothing great he can offer in the post-production either. The question arises as to whether the post production was an artistic decision, or whether Wiseau just didn’t bother at all. Perhaps one badly edited scene could be forgiven, but the problem is that these scenes occur throughout the whole movie making it not just a one-time thing.

Perhaps the most ridiculous element is the renown sex scene between Lisa and Johnny. What is even more ridiculous than the scene itself, is the fact that for the two times the couple are portrayed having sex in the movie, the exact same shots are used. Did Wiseau just not have enough time or effort to film another scene? Or did he think is audience stupid enough to not realise that the same scene is placed in twice in the movie?

Another awful editing moment, apart from the shot of Johnny shooting himself is the flower shop scene where Wiseau decides to cramp in a 10 second dialogue into a 3 second space, which not only has visibly bad lip syncing but a fast mumble of a conversation between Johnny and the flower shop worker that again adds no importance to the plot, apart from the knowledge that Johnny likes dogs. Was this really necessary? 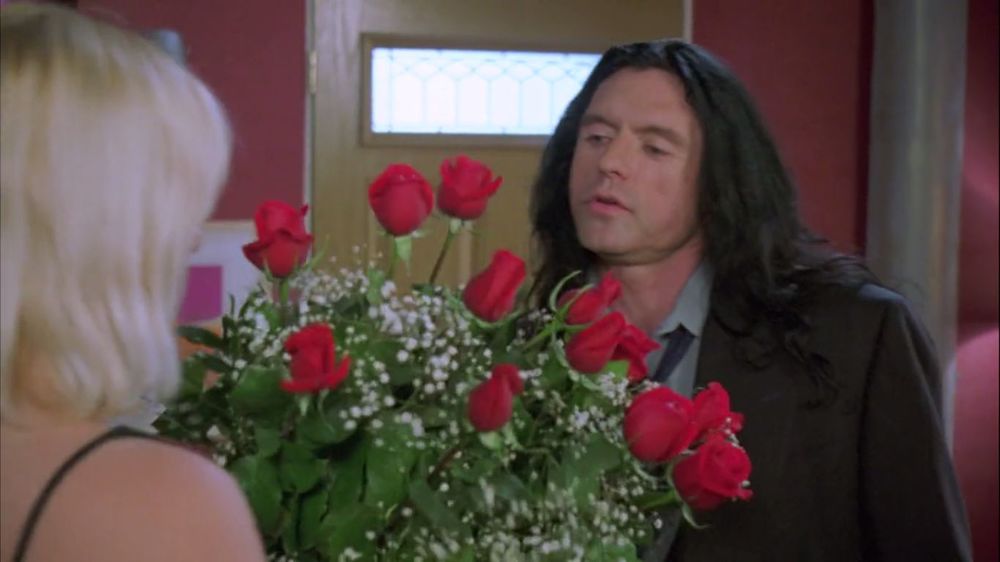 Perhaps what really makes this movie the worst movie ever is its cringing acting both from Wiseau himself and the rest of the cast. Most of the actors struggle to go past one facial expression, while Wiseau speaks his lines in the most inhuman way.

The monotony of their acting combined with the obvious exaggeration during more tense moments, such as the infamous roof scene between Lisa, her mum and Denny where they scream over each other as they try to find out what kind of trouble the boy got himself into with the drug dealer, as their shouting and zoo-like behaviour become completely ridiculous, making it seem more like a really terrible soap-opera rather than a cinematic production.

Another questionable choice related to the actors is the fact that Mark, who is a primary character, is unapologetically replaced by another actor half way through the movie, with no explanation given for this. Did Wiseau think that similar to the repeated sex scene, the audience simply wouldn’t notice?

Who really stands out though is Wiseau himself, making every line he says a tragic comedy, making one wonder why he would star in a movie with no acting skills whatsoever, making a complete fool out of himself as is evident from the audience reactions at the screaming – an audience who only went there to see the failure for themselves.

1. The Room is a Serious Movie 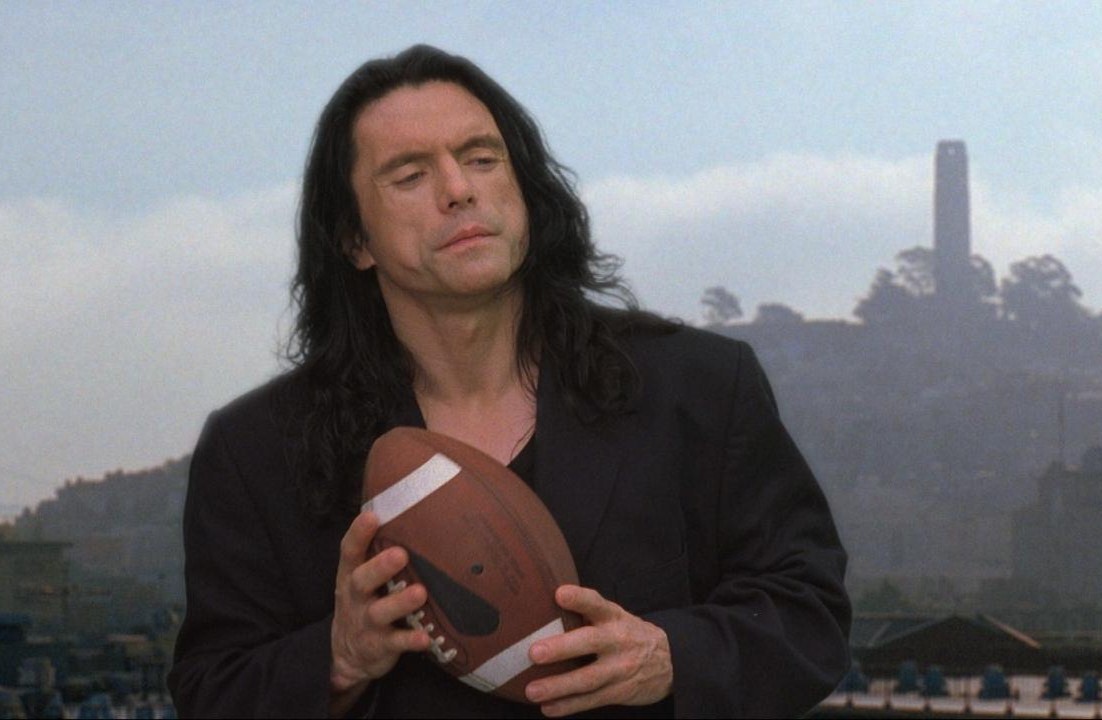 What is the most surprising and sad part of this whole film, is the fact that Wiseau never intended The Room to be the comedy it became. And not that it turned into the comedy in the process; up until the audience’s reception, Wiseau was confident that he was making a serious movie.

Once the movie received the reaction it did – first being highly hated and then screenings being renewed for more people to see this failing masterpiece, while laughing and ridiculing every single possible element of the production creating one of the biggest cult followings after The Rocky Horror Picture Show – only then did Wiseau slowly manoeuvrer the description of the genre towards a black comedy to mask the disappointment.

And although through interviews he expressed that he is okay with people expressing themselves how they wish, and despite The Room becoming one of the most quotable films of the century as well as a huge cult classic, it still must have been quite upsetting for your “serious piece of art” to be ridiculed to such a huge extent.