Most filmgoers probably first heard of Raw (or Grave, as it’s known to its original francophone audience) by way of its notoriety as a film that provoked physical distress among its viewers due to its exaggerated gory nature. Unfortunately, the downside of this publicity is that the film will likely drive away many fans of world cinema whilst also attracting a soon-to-be disappointed crowd looking for a bloody mess of an exploitation film.

In truth, what lies beneath the blood and guts of Raw is a meticulously-crafted coming of age tale of Justine (or Juju as she’s called by her parents); a young girl, played by Garance Marillier, entering her first year of study at a Belgian veterinary college. A lifelong vegetarian, her forced consumption of raw meat during a hazing ritual awakens a dormant taste for flesh of the human variety. The end result is nothing short of finger-chewing good.

Before digesting Raw as a horror film, it’s important to address the assertions that it does not fall into the genre. On the contrary, when one examines the legacy of the horror classics that have stood the test of time, Raw has more in common with these works than many of the cheap scares and gore-fests that have graced the screens in recent memory. Here are five key reasons that Raw is destined to be remembered as a horror classic:

Firstly, there’s the general atmosphere of the film. Visually-speaking, Raw’s colour palette consists of rich, sensual tones that evoke the heavily art-directed giallo films of the 1970s as well as the art-film elements the French New Wave. The film’s set pieces range from the picturesque Belgian countryside with its lush green shades to the neon underbelly of campus party-culture, in addition to bleak, industrial shots of the college’s interior.

It seems that in the tradition of horror films with a certain satirical element such as Rosemary’s Baby, the Nightmare on Elm Street series or The Evil Dead; Raw has a degree of satirical self-awareness about itself. Director Julia Ducournau has a delightfully ironic sense of cinematic horror and comedy, with the scenes of Justine’s ill-fated Brazilian wax given the same stylized, foreboding treatment as any cannibalism scene.

The most remarkable and enduring aspect of Raw’s aesthetic is its admirable restraint and dignity. Despite its infamy on the film festival circuit for provoking physical reactions from its audience such as fainting and even vomiting, it’s a remarkably classy venture into the world of people eating people; all things considered. Julia Ducournau is never shameless or exploitative in her depiction of gore and at times there’s almost a taboo sort of beauty to be found in shots of protagonist Justine’s glazed-over eyes and bloodstained lips.

Indeed, Ducournau often looks for beauty and horror in the most unpredictable of places; utilizing the general squeamish messiness one would expect at a veterinary college as a means of provocation as much as any violence and conflict. 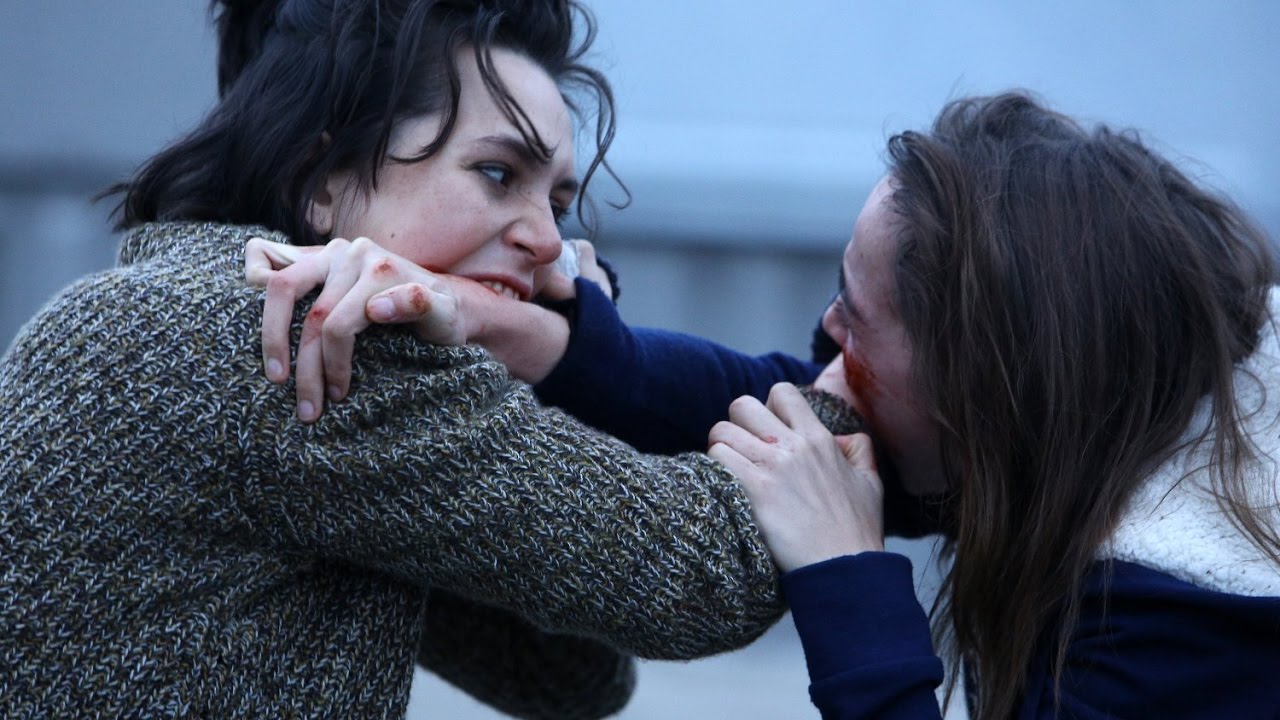 The age-old saying that good artists copy and great artists steal is clearly a mantra of value to Julia Ducournau. However, the cine-literacy of Raw comes off more as tribute than blatant theft. Those who are searching for little nods and winks to classic horror cinema tropes will not be disappointed upon seeing this film; most obviously is the clearly Carrie-inspired sequence of frosh hazing as copious buckets of blood are dropped on the students from a great height. The twist this time being that the blood originally used to ostracise and bully Carrie is now used as a gesture of initiation into a larger group.

Furthermore, the subplot wherein Justine develops a hideous rash after first eating the raw meat as if undergoing some sort of metamorphosis will no doubt resonate with fans of David Cronenberg’s filmography and the “body horror” subgenre as a whole. Raw also goes on to evoke comparisons to Dario Argento’s Suspiria for its campus setting and musical similarities,

Many critics have also noted the film’s debt to the Canadian cult horror feature Ginger Snaps; which is noted for its similar use of a young female protagonist undergoing a period of horrific transition as well as its parallels with the classic coming-of-age story formula. Upon examining all these tried and true horror cinema beats, it can be truly said that Raw is very much in touch with its heritage.

The key to success with a horror film soundtrack is to let the music compliment and further the tone of the film without simultaneously beating the audience over the head or drumming an emotional cue into their ears. The score of Raw achieves the perfect balance between annunciating the mise-en-scène of the film while not overpowering it.

The soundtrack component of the music in Raw is carefully picked to convey very particular moods. During the early party sequence, one should note the use of the song “Despair, Hangover & Ecstasy” by The Dø. While perfectly catchy enough to serve the purpose of getting partygoers up and dancing their cares away, the lyrics tell a deeper story; particularly the melancholy of lines such as “We’re breaking promises we thought we could keep” or “so many people around, we disappoint and let down”. This serves to underline the anxiety that lurks beneath the addictive bass-line, perfectly capturing the clear discomfort Justine is experiencing with the excess and debauchery around her.

In terms of its place in classic horror cinema lore, the score for Raw calls to mind the progressive rock pieces composed by Goblin for classic giallo films such as Suspiria; particularly with its gothic sensibilities and use of leitmotifs. The music of Raw also works its way inseparably into the symbolism of the movie. One of the acoustic leitmotifs in the film can be heard during pivotal moments in Justine’s evolution as a character upon her arrival at the school, and her private moments of solitude and vulnerability.

One of the key moments of the film, both dramatically and musically, is when Justine eyes with morbid curiosity the severed finger of her elder sister after a Brazilian wax gone quite awry. We see in her eyes the conflict and temptation she feels while looking over the finger, the acoustic theme playing all the while; subtly highlighting the scene as a pivotal moment. Suddenly, she licks the blood from her hand and pauses—eyes-wide—and devours the finger as the leitmotif blooms from solo guitar to an atmospheric gothic synthesizer theme that evokes the point of no return and the discovery of a forbidden desire. 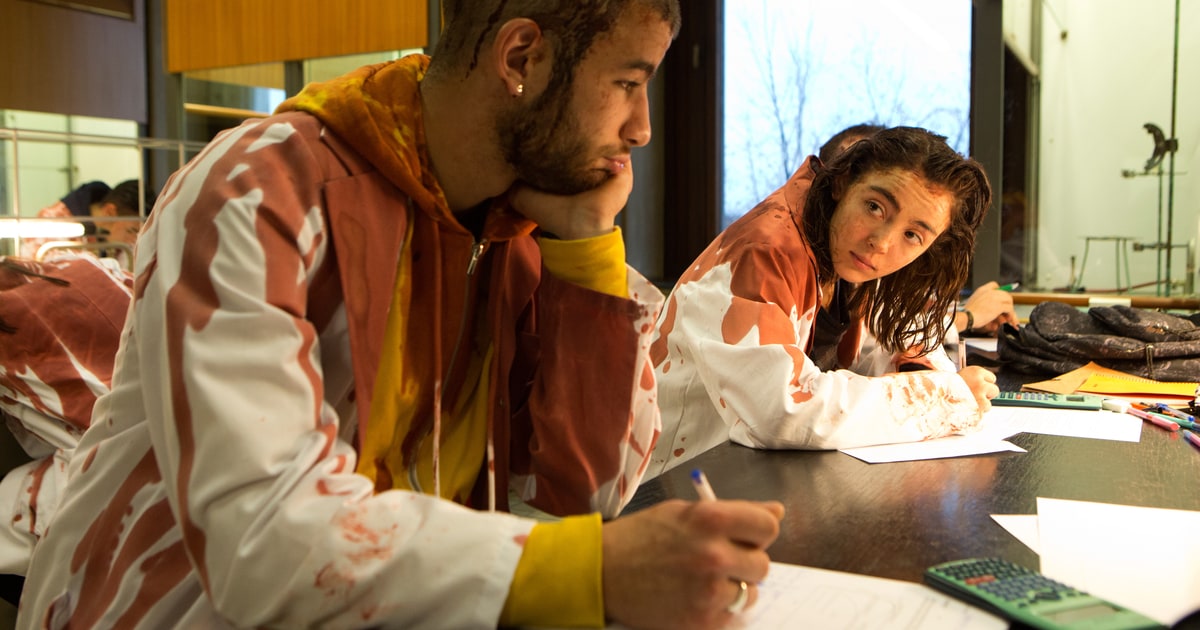 Subtext and metaphor are essentially the currencies of horror cinema. Any great horror movie worth remembering almost consistently contains multiple readings. Be it the loss and renewal of one’s faith in The Exorcist, the sins of the father in A Nightmare on Elm Street, or sexual frustration and the valorization of chastity in Halloween.

It’s hard to get a definitive read on the main subtext of Raw, mainly because its metaphors are legion. Firstly, we have the issue of conformity and the crushing of the individual, which is raised by the subplot of Justine’s forced participation in frosh hazing; wherein the consumption of raw rabbit kidneys betrays her personal moral code. There is also the forced removal from her comfort zone with the pressure to wax, shave, have sex and present oneself in uncomfortable, impractical but revealing attire.

We also have the Ducournau-approved narrative of the individual coming into conflict with one’s more repressed, taboo and animalistic nature; the reconciliation of the primal urges and lusts that dwell within us all. After all, the concept of cannibalism came first from reality, not horror fiction.

Third and finally there is the failsafe interpretation of any female-centric horror film; the mildly tiresome metaphor of coming-of-age and sexual awakening. However, judging by the hungry, predatory glare Justine holds on the body of her roommate Adrien during a topless football match, there may be some truth to that.

Justine, discomforted, temporarily leaves rather than choosing to confide her taste for human flesh in her roommate. Upon returning to his room and making an advance on him, she simply says “c’est grave”; indicating the severity of her dark desire and earning the film its original title, as well as the interpretation of sexual and animalistic repression.

One of the most horrifying aspects of life in general is that real closure and resolution are rare luxuries. The one thing that never fails to burn a horror film into the minds of its audience is to ensure that the conflict remains unresolved.

One of the benefits of Raw’s overall surreal premise is that one barely sees the end reveal coming until the very conclusion. Of course by this point the audience realizes that the “spoiler” of the film has been staring them square in the face from the very start.

In a way, the audience is provided with a certain degree of closure in the knowledge that Justine’s equally carnivorous sister Alexia has been committed to a mental institution and that Justine is secure under the watchful, eyes of her parents, where her vegetarian diet will be enforced with utter certitude.

However, only during Justine’s father’s final lines wherein he details the voracious tendencies of the girls’ mother during their respective vet college days does the queer disfigurement of his upper lip and his habit of constantly wearing a scarf veer from mere eccentricity to raising major red flags as the audience realize that Justine’s mother has taken her fair share of bites out of dear old dad.

In the final sequence, Juju recoils in fear at the sight of her father’s finally-exposed, gnawed torso; realizing the extent of this “family tradition”. After reassuring her that he is confident she’ll one day find a solution for these urges, the film promptly cuts to the haunting keyboard theme and end credits.