Rian Johnson’s directorial debut, Brick, scooped the Special Jury Prize for Originality of vision at the 2005 Sundance Film Festival. The film, which he wrote after leaving film school, took him around seven years to gather the funding for and then around twenty days to shoot. It’s a film noir with a difference, set in a California High School and starring a young Joseph Gordon-Levitt.

The plot centres on his character, Brendan Frye’s efforts to solve the mystery of his ex-girlfriend Emily Kostich’s murder. In doing so, he has to navigate the shady goings on amongst students whilst keeping the school’s Assistant Vice Principal off his case.

The film was lauded by critics and has become something of a cult classic, however it is deserving of much wider appreciation and a place amongst the greats of the early 21st Century. Here are just a few of the reasons.

1. It’s one of the best detective stories of this century so far because it knows where to go for its inspiration 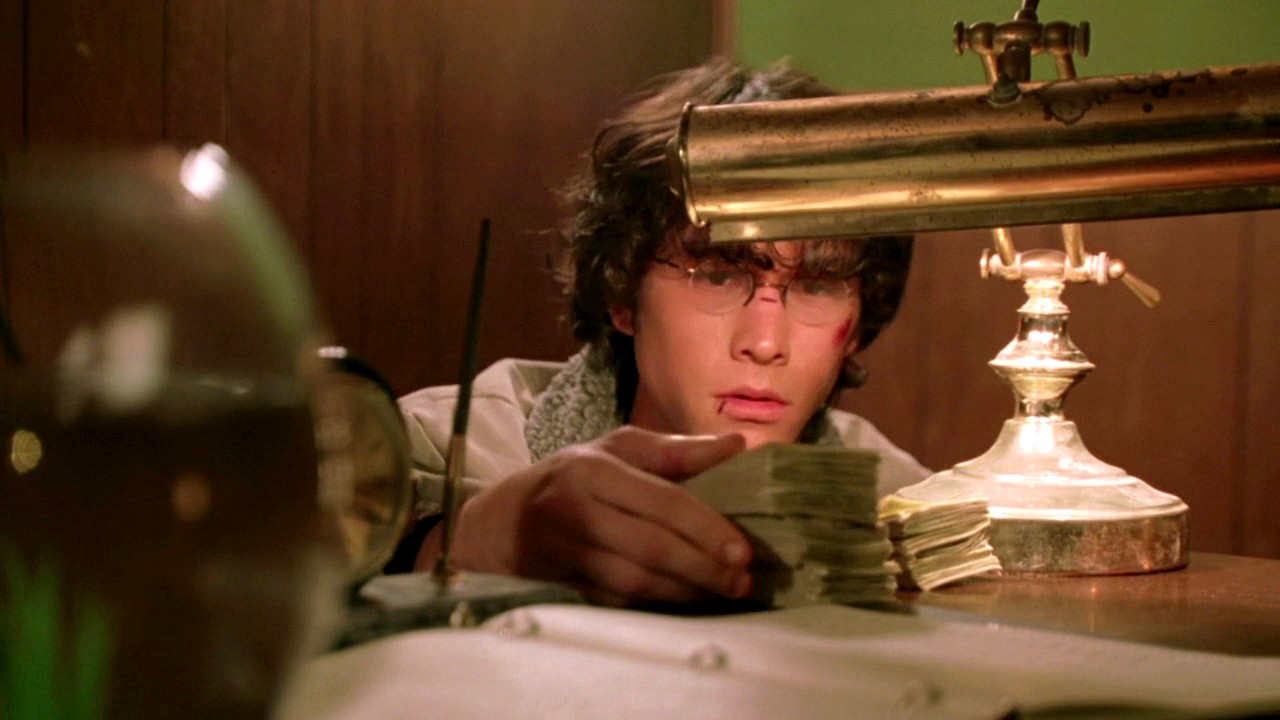 Brick takes all the elements of Dashiell Hammett and Raymond Chandler, calling on the hard boiled film noir sensibilities of stories like The Maltese Falcon and The Big Sleep, turning them into a wonderful homage to that era but also adding a fresh feel that fits the modern day.

Brick brings real issues facing young people today such as isolation, relationships, teenage pregnancy and substance abuse to the fore whilst never pausing to navel-gaze or proselytise about them. The underlying themes are merely left for the audience to think about. It’s all rolled together into a mystery with a 21st Century Sam Spade at the centre of it, willing to take hits and dish them out in equal measure.

The story of how Brendan picks his way through the ranks of the local drug trade in order to uncover the truth about Emily’s death rattles along at a pace that echoes the no nonsense approach of its predecessors, bringing all the elements together for a very satisfying payoff that leaves only enough questions to make the audience feel satisfied and not wishing to leave the world that they have been inhabiting.

2. Nora Zehetner lights up the screen 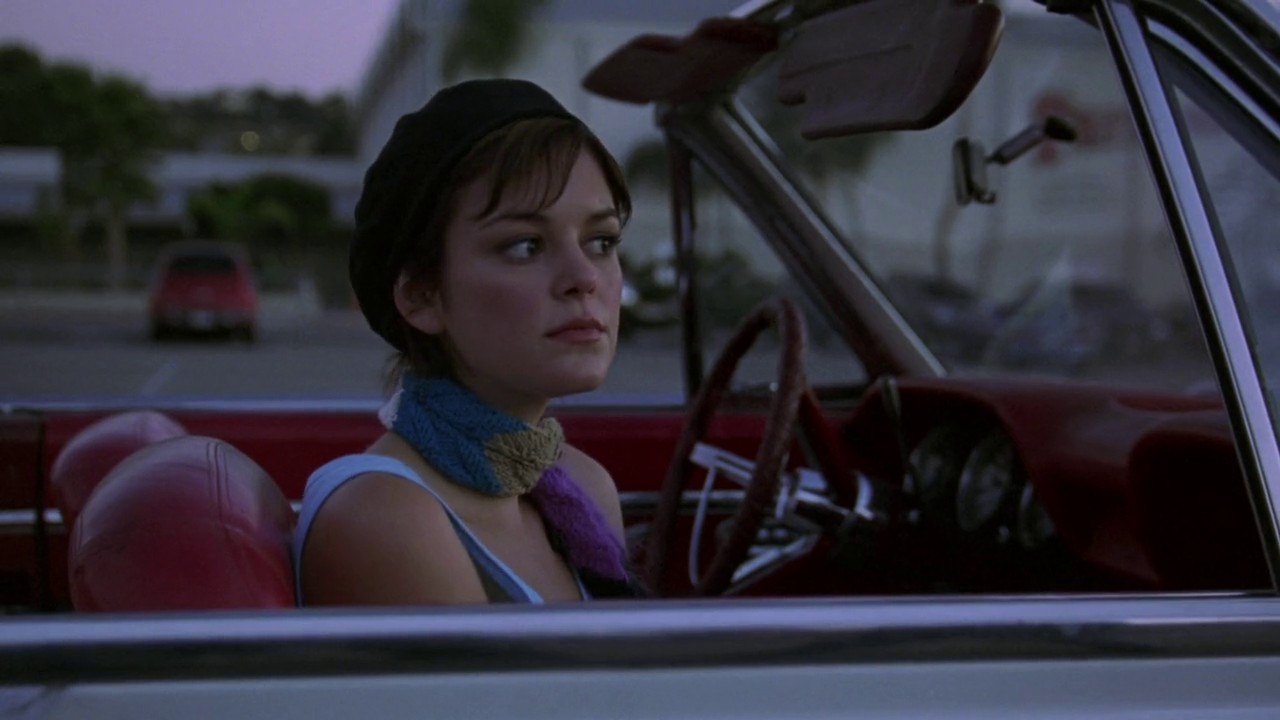 Here’s an actress who deserves to have had far more exposure over the last decade. In her character, Laura, she creates one of the best examples of a femme fatale for a long time, seeming at once so regal, so vulnerable and yet ultimately so dangerous.

She creates an image of herself that seems to us so different from the other characters Brendan crosses paths with; fresh-faced, wide-eyed innocence and compassion. This is combined with a seemingly heartfelt desire to have someone look out for her the way Brendan is for Emily.

Brendan’s cynicism towards her is an insubstantial mask. Desperately, he wants her to have been on his side the whole way through but Zehetner’s real achievement is in making the audience wish it too. She plays the part magnificently: understated and alluring, holding the viewer in thrall with her rendition of “The Sun Whose Rays” from The Mikado.

She glides gracefully from scene to scene, only very rarely giving a hint of her real personality, an example being when she wraps her fingers spider-like around Brendan’s chin and pulls him in for a kiss. She never shows her fangs until cornered at the very end.

3. The script is a masterpiece 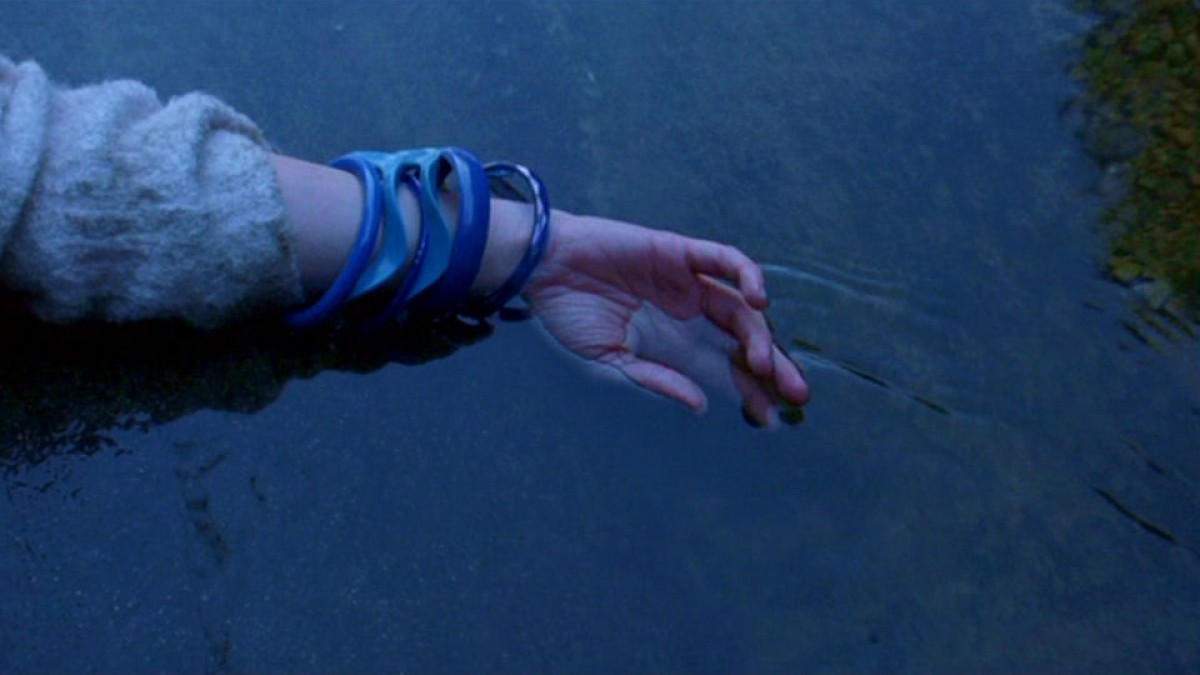 This is truly a cracking piece of work, calling for note-perfect delivery from the cast. It’s delivered at breakneck pace leaving little time for the audience to reflect or digest and is littered with anachronistic terms that hark back to the golden age of detective thrillers.

These are interspersed with a savvy, High School lexicon including such gems as judging someone by where and with whom they eat lunch. Gum, bull, clam, blow are all resurrected as relevant ways to express an idea in a most delicious way. The true joy of it is how the style of interactions from Hammett have been reset to a High School setting.

The meeting between Brendan and the Assistant VP is pure Bogart, laying down the law in the District Attorney’s office in The Maltese Falcon.
“Write me up or suspend me and I’ll see you at the Parent Conference.” It’s a line that fits so well but is so comedic in its implications when you think about the actual dynamics of power in the room.

The beauty of the script and its density is how it rewards repeated viewings. Each time there is something new and eminently quotable that you never picked up on the time before.

The use of language also adds to the mystery of the film as the viewer shares the same need for clarity as Brendan. This fits so well with the High school setting as it is so true to life; there is so much power in the changing landscape of language in such a setting that outsiders are at a profound disadvantage.

4. The set designs are perfect 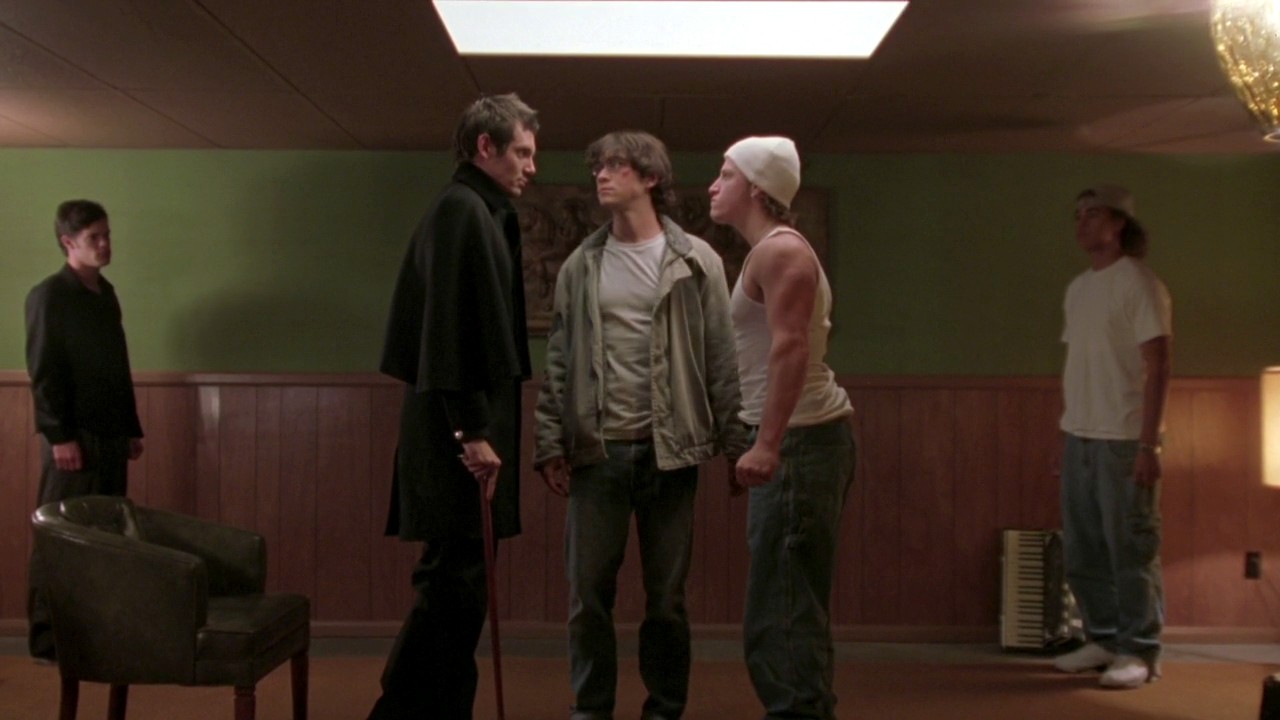 There are some gorgeous locations used throughout the film, dressed to perfection to fit the mood of the film. Johnson used his old High School in San Clemente and this provides a wealth of seemingly everyday aspects that you’d expect to see in any of one of a thousand such places.

The drama suite is fantastically realised to add a theatrical air to proceedings: drapes hanging to create silhouettes of hidden players and a dressing room complete with a huge mirror surrounded by lightbulbs evocative of old-time Hollywood, the perfect hiding place for the vampish Kara.

The Pin’s lair was designed to have, in Johnson’s words, “an eerie normalcy” based on his grandpa’s basement in Illinois. It’s a suitably claustrophobic space with wood panelling on every surface, making it reminiscent of the inside of a coffin.

Another one of Johnson’s reference points for the design was David Lynch’s Twin Peaks. It’s also replete with bird cues to remind us of The Maltese Falcon: a statuette, even the head of the Pin’s cane.

The real standout, however, is the mysterious house party. The costumes give a Gatsby feel whilst burning candles and a labyrinth of rooms create a sense of mystery and maturity with much hidden from view and only hinted at. The party is a masquerade with all the young people in costume inhabiting an adult realm. 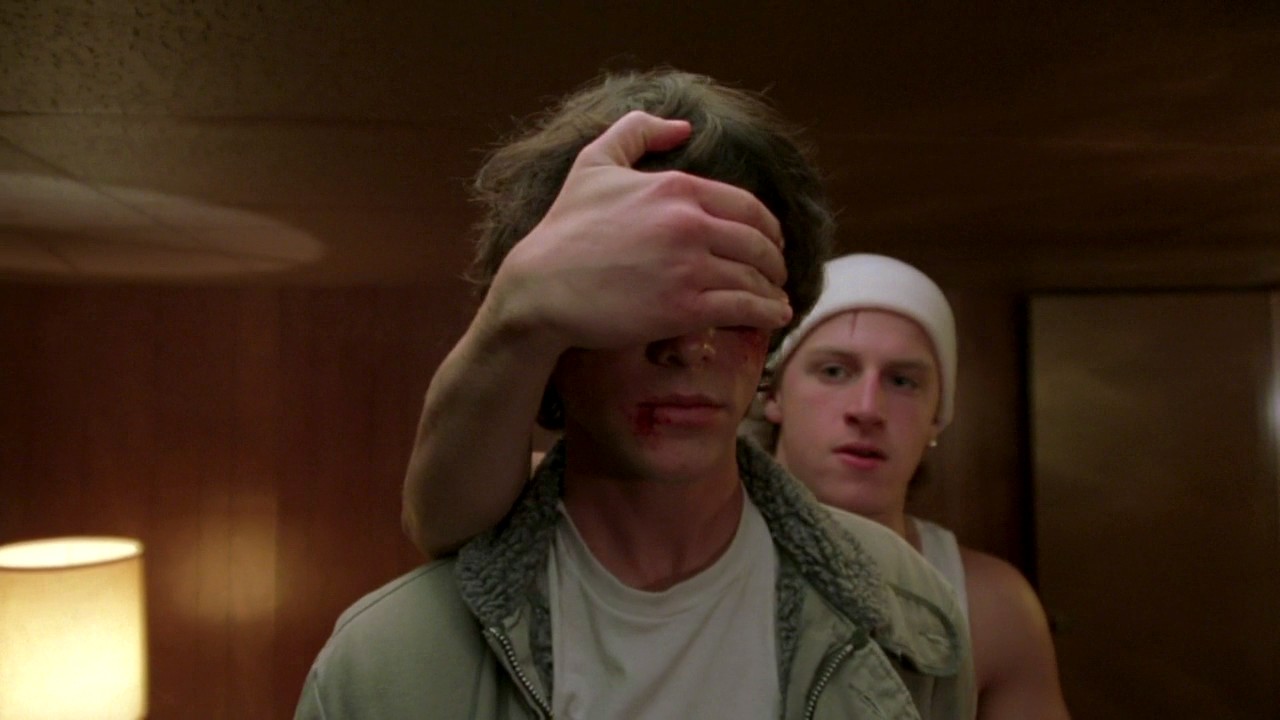 The use of camera angles in Brick is uniquely disturbing. Very rarely are we at the eye level of the characters. So much is shot from just above the ground, looking up at the players to make them seem bigger than they are; maybe in an attempt to fool us into thinking of them as adults. The camera also dwells on feet a great deal, giving the audience a good impression of the leg work involved in our protagonist’s journey.

There are static cameras being approached or retreated from, close ups, long shots and jump cuts to keep the audience on the back foot. In addition, there is the skilful use of lighting throughout, from the inky gloom of the tunnel against the harsh sunlight outside which conceals onlookers despite how close they are, to the half-lit faces of people in various settings which hint at their duality.

In the Pin’s lair, Brendan uses a mirror to angle the single shaft of light in order to search a room, echoing the way he is shining a light on everything that has been going on. The tunnel itself is a good dramatic marker for the story which hints at the unknown. The fact that Emily’s body is found just outside it suggests that she has encountered the unknown and been spat out by it.