Sometimes you need a little garbage to balance out the gold, a greasy bag of french fries instead of a steak dinner. Mark Freed’s Shock ‘Em Dead is as trashy as they come but knowingly so, serving up 90 minutes of ridiculous hilarity and satisfying on all fronts.

A nerdy, acne-faced suburban teen auditions for the lead guitarist position in a hair-metal band, Spastique Colon (that name gives you a good idea of the territory we’re navigating here). He fails miserably, is ridiculed, and turns to the aid of a local Voodoo priestess(!). She morphs the introverted geek into a cocky, uber-talented guitar god, and he immediately seizes control of Spastique Colon.

In return, however, he must kill the innocent: Martin is doomed to live forever as a riff-shredding, murderous ghoul. Heavy metal horror was popular in the late 80’s (Hard Rock Zombies, Trick or Treat, Rocktober Blood, Black Roses), and Shock ‘Em Dead hit the scene just as this sub-genre was winding down.

Three writers worked on the script, and that’s kind of incredible, as it’s remarkably stupid. The story is poorly structured and there’s no real direction to speak of; one gets the impression that Freed was simply trying to survive the experience of making a debut movie. He did accomplish one crucial thing, though, probably the most crucial: his film easily entertains.

The plot is swiss cheese, the acting dreadful, the metal music horribly corny, but Shock ‘Em Dead is such a quickly-moving onslaught of dated weirdness that none of these things matter. 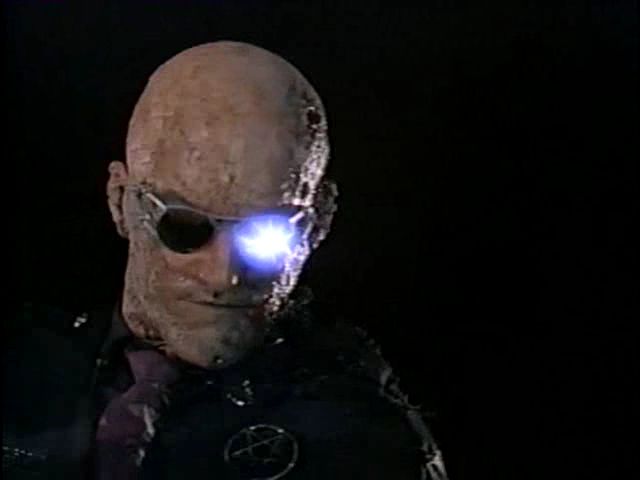 Highway to Hell has attained a strong following over the years, and it’s richly deserved. A highly unusual action-horror-comedy hybrid written by Brian Helgeland (L.A. Confidential, Man on Fire), the film was shot in 1989 but shelved until 1992, when it went straight to video.

Highway begins with a young couple, Charlie and Rachel, driving through the desert on their way to elope in Las Vegas. They veer off onto an abandoned back road and are pulled over by a horribly disfigured police officer named Hellcop.

He snatches Rachel and takes her through a portal straight into Hell; Charlie follows, and we’re treated to one of the funniest, wildest cinematic representations of Hades ever attempted. Highway to Hell presents the dark afterlife as a sprawling desert, dotted with tiny enclaves of miserable dead people stuck in an endless rut.

This seems to be a film that was intentionally designed to be a cult classic, but it’s from a time when that wasn’t exactly commonplace; Highway to Hell doesn’t feel forced or disingenuous, but rather inspired, totally free. This overlooked gem, difficult to find for ages, has finally been made available on DVD/Blu thanks to Kino Lorber. 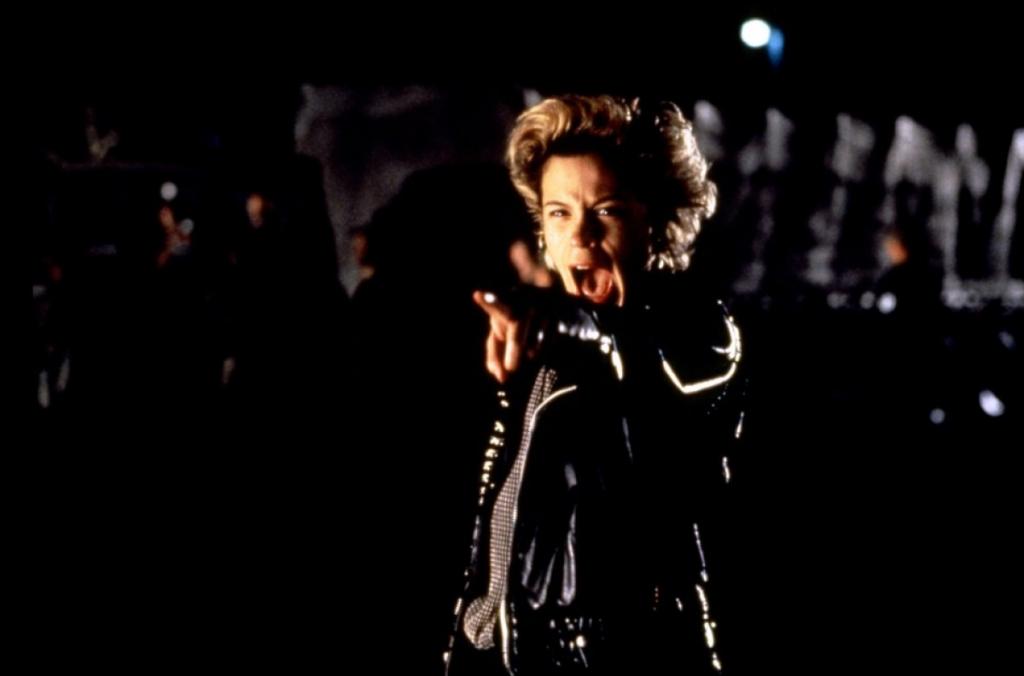 Abel Ferrara’s Body Snatchers is the third cinematic adaptation of Jack Finney’s 1955 sci-fi novel, and the least appreciated. Rather than taking place in California and amongst the general populace, like the first two films, Ferrara’s version is set on an Alabama military base.

The loosest take on Finney’s book, it’s also the most plausible: if a hostile alien species was attempting to overtake earth by destroying and replicating human beings, the American military, where conformity is both admired and rewarded, would be an ideal starting point.

Body Snatchers revolves around an agent from the Environmental Protection Agency who’s arrived on the base, wife and children in tow, to study the harmful effects of military activity on surrounding ecological systems. Already feeling misplaced amongst throngs of uniformed soldiers, the civilian family grows to realize that something terrible is occurring: it’s those pesky pod people, only this time they’re methodical, organized, and heavily armed.

Abel Ferrara is one of our greatest living filmmakers, and Body Snatchers is an unusual entry in his filmography. It’s his only major studio effort, on the highest budget he’s ever worked with, and also the only time he’s ever focused on a traditional family structure. He asserts himself brilliantly, working in sync with cinematographer Bojan Bazelli to create sumptuous visual compositions; every frame of Body Snatchers exudes menace, all shadows and dim light and uneasy space.

The film also adequately provides as an exercise in horror, navigating between creepy, low-key atmospherics and the disturbing alien transformation process, a beautifully rendered achievement of prosthetics.

This wildly underrated work was all but ignored upon its release and quickly faded into memory, but Body Snatchers had one voice of support in late critic Roger Ebert. He awarded the film his highest rating and (correctly) stated that it was the strongest adaptation of Finney’s novel. 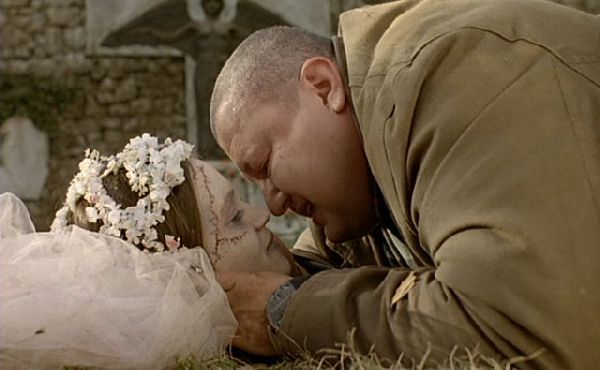 Michele Soavi cut his teeth as a young man in the Italian film industry, working under the supervision of such legends as Lucio Fulci, Dario Argento, and Joe D’Amato. He would go on to direct four exceptional horror films, but his finest achievement is 1994’s Dellamorte, Dellamore, known in many territories as Cemetery Man.

This film basically represents the end of an era in Italian cinema, horror in general, as it was the last true Italian zombie picture. It’s also very likely the best, providing everything great about Italian horror – atmosphere, gore, sex, cool music – while adding a layer of philosophical lyricism and a killer sense of humor.

It tells the story of Francesco Dellamore, watchman of the Buffalora Cemetery. He and his dimwitted assistant, a rotund fellow named Gnaghi, deal with a recurring problem: two weeks after burial, the dead return to life and escape their graves. Lazy and complacent, Franceso simply shoots the resurrected corpses in the head and re-buries them. When the dull routine of his life is interrupted by the arrival of a beautiful young woman mourning her freshly dead husband, events spin wildly out of control.

As the zombie problem seems to worsen, Dellamore’s obsession with this ravishing knockout (played by model Anna Falchi) tears away at his mental fabric, and the film slips into something that resembles a violent fever dream. Buffalora is a tiny town that feels like Europe but also occasionally like an ethereal plane, and Soavi expertly captures this unusual environment.

The pictures comedic aspects are pitch-perfect, sophisticated and nasty; Cemetery Man offers countless quotable lines and unforgettable set pieces (the boy scout zombies are a highlight). Horror and comedy have rarely been so successfully mixed.

British actor Rupert Everett is the living embodiment of this beleaguered groundskeeper: permanently dressed in all black, chain-smoking, and slinging a revolver, Everett’s droll line readings and perfectly-timed reactions help provide the audience with a weirdly likable protagonist. We want to see what happens to Francesco, every step of the way.

Cemetery Man is hilarious, irreverent, gory, at times profound and even moving. It’s also a passionate farewell to a style of filmmaking that its director was intimately familiar with. With Cemetery Man, Michele Soavi didn’t simply pay loving tribute to Italian horror cinema: he mastered it. 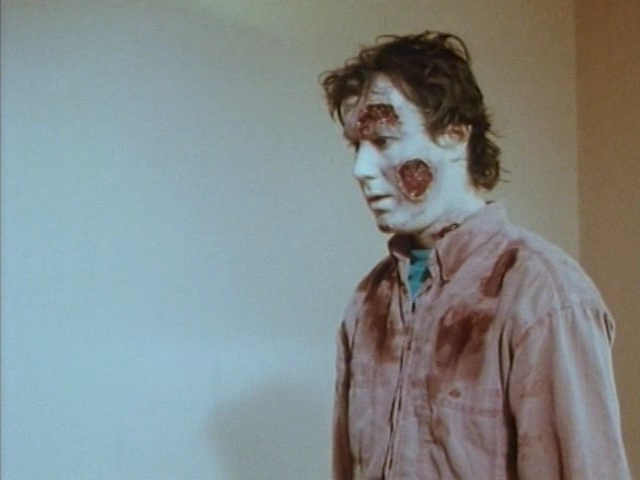 It follows Mark, a botanist who goes into seclusion after being bitten by a lone zombie. Shutting himself off from friends and family in a dreary studio apartment, Mark tries to adjust to both newfound cravings for human flesh, and his gradual, sickening decomposition: morality, humanity, and body erode as one.

Like many of the entries on this list, I, Zombie is wildly imperfect, but there’s an extraordinary amount of heart on display here. Andrew Parkinson deeply cared about this film, and it shows: it took four years to complete, and he personally paid for everything out of his own pocket. The score Parkinson composed is (mostly) gorgeous and tasteful.

Acting is uniformly strong, a shock considering nobody was paid (not even transportation was compensated). The gore effects are well achieved, appropriately nauseating; I, Zombie deals with violence in an intimate, personal fashion. These are real lives Mark is bringing to an end, real people, and they never feel like mere numbers added to a body count.

It’s overly dour and humorless, occasionally padded (a 70 minute film extended to 80), has plot lapses (he never visits a hospital?), but this minor-key melody of a movie is the real deal, the sort of personal effort people kill/bankrupt themselves to complete.

Those expecting a rip-roaring thrill ride will be disappointed, as I, Zombie is really a drama wrapped up in horrific clothing; more adventurous filmgoers will likely take something away from this one. It’s Tetsuo: The Iron Man meets Night of the Living Dead meets Mike Leigh, shot on a shoestring budget.