“The crowd there leans a little right,” warns Tad (David W. Thompson), a sketchy Portland promoter, to Pat (Anton Yelchin) and his noisy punk band, The Ain’t Rights. Normally they’d never take such a shady gig but they’re on the ass end of a tour that’s put them in the hole and so they reluctantly agree, thus setting up rather inconspicuously a senses-shattering ferocious urban slasher horror film from writer/director Jeremy Saulnier (2014’s Blue Ruin and 2007’s Murder Party).

Pretty soon upon arrival at their destination, deep in the Oregon boonies, Pat and co. quickly realize they’re about to play a white supremacist skinhead shithole. Plowing through a confrontational set list that they kick off with a Dead Kennedys cover of “Nazi Punks Fuck Off”, the hapless punks just want to get their cash and go. But hopes of a hasty retreat evaporate when Pat and Sam (Alia Shawkat) witness some stomach churning nightmare fuel in the titular green room.

Faster than you can spit “neo-Nazi revival” The Ain’t Rights are barricaded in said room as the well-armed racist rabble (murderous machetes and blood simple pit bulls abound), led by cruel and cunning ringleader named Darcy (a chilling Patrick Stewart) mobilize and move in for the kill.

Green Room is a vicious thrillride, and a fascinating, forcible, and rough punk rock variant on Howard Hawks’ Rio Bravo (1959)––complete with a likeable crew endangered in an under siege scenario with slimming odds for survival.

Saulnier’s artful imagery runs the range from radiant to horrific, vicious to tender, lending an ultimately tragic tone buoyed by vérité-style hand-held sequences and smart use of saturated colors. Violence erupts in terribly rapid succession but is smartly shown ferociously, and never for comic reprieve––though humor is present to sustain the dramatic intensity.

For extreme action fans, horror hounds, and those who enjoy cinematic escapes without a safety harness, Green Room is something of a god send. The list that follows details 10 films that deal with similar themes, motifs, and approximations, or those that outright inspired Saulnier and his team as they mined the dark recesses of man made evil, backwoods horror, survivalism, siege-like synopsis, and then some.

If you can handle the adrenaline rush and the shocking intensity of Green Room then the films that follow offer exciting and fist-pumping recompense. You’ve been warned!

While both of Saulnier’s previous features will please and provoke fans of Green Room (Murder Party from 2007 was his low-budget but high-concept debut), it’s Blue Ruin that really made the blip on indie cinema’s radar that a new and insistent filmmaker had startlingly surfaced.

Succeeding into full-on auteur as writer/director/cinematographer of this instantly engrossing shocker, Blue Ruin stars Macon Blair––who also surprises and stirs the pot in Green Room––as Dwight Evans. Near homeless and wracked with anxiety, Dwight lives in his rusted-out, beaten-up old blue Pontiac Bonneville––the literal “blue ruin” of the title––making him instantly endearing and strangely sympathetic. Very soon a string of ill omens and bad news sends Dwight to his old haunts to revenge the deaths of his parents years ago.

Alternately tense and hilarious, this home invasion slasher from director Adam Wingard and screenwriter Simon Barrett––the same dudes who did 2014’s excellent action horror-thriller hybrid The Guest, also a must see for genre fans––is something of a self-reflexive sensation of the mumblegore variety.

Fixing it’s decidedly devilish and droll glare upon the dysfunctional Davison family, matron Aubrey (the iconic Barbara Crampton, star of such genre classics as Re-Animator, Chopping Mall, From Beyond, and so many more) and patriarch Paul (Rob Moran) have invited their adult children and their partners to their bucolic Missouri vacation home for dinner, catching up, and hopefully to bury a few hatchets, too.

Soon a body count starts to blow up as animal masked assailants, armed with crossbows, machetes, and piano wire, encircle the isolated home.

Winner of the 1986 Independent Spirit Awards for Best Picture, this alarming tale of aimless youth from director Tim Hunter and screenwriter Neal Jimenez is a haunting and agitated tale of deeply wounded Americana and damaged adolescence.

Set in a sleepy California whistle-stop, Daniel Roebuck is flat-out frightening as troubled teenage burnout Samson ‘John’ Tollet, who has just murdered his girlfriend, Jamie (Danyi Deats) and left her naked body on the river bank just outside of the sticks. Inspired by true crime events, Samson shows little remorse in his terribly misdeeds and brings his buddies to ogle her corpse.

The leader of Samson’s rabble of pals is Layne (Crispin Glover, excellent), who wants the gang to keep quiet about the murder to protect their pal, but this doesn’t sit well with them, especially with sensitive couple Clarissa (Ione Skye) and Matt (Keanu Reeves), who are itching to let the authorities in on the nastiness.

Originally intended as another action vehicle for Arnold Schwarzenegger, whom director John McTiernan worked with the year before in Predator, this dazzling action film extravaganza has more than a few ideas and concurrence to Green Room. For starters, the hopeless situation of an outnumbered standard-bearer facing terrible odds in a siege-like story line dotted with carnage and clever quips is irrefutable.

It’s comparable too, perhaps, that where no one expected Patrick Stewart to play so well against type as a vile racist baddie that comedic TV actor Bruce Willis also could not be anyone’s idea of a tough guy, at the time. But Willis wowed ‘em all as New York City cop John McClane visiting his estranged wife in Los Angeles over the Christmas holiday, blissfully unaware of the brutality about to unfold.

Quicker than you can say “Yippee-ki-yay motherfucker!”, McClane is whisked from the airport via limo to his wife, Holly’s (Bonnie Bedelia) work, the sprawling state-of-the-art Nakatomi Plaza building where a Christmas party is in full swing. Around the same time McClane arrives so does Machiavellian terrorist Hans Gruber (the late great Alan Rickman) and his heavily armed Eurotrash syndicate of badass criminals.

McTiernan goes gleefully OTT as he throws McClane into one fist-pumping fracas after another with a fusillade of firepower, and an almost endless onslaught of explosions as the stakes get ever higher.

Part amazing action film, part pitch-dark comedy of steady one-liners, Die Hard is the film that rejuvenated the action genre, jump-started a fun franchise, made Willis a household name, and is now accurately considered some kind of masterpiece. Don’t miss it! 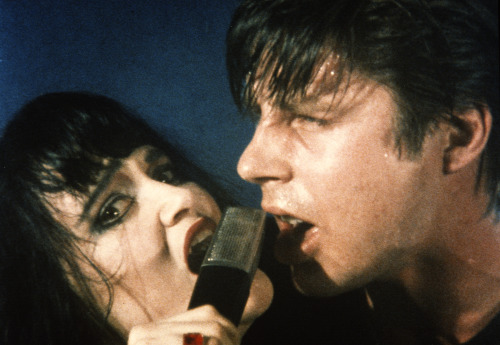 Wait a sec––a music documentary made the list of movies to check out if Green Room gave you a boner? That’s right! This intimate and exhilarating glimpse into the late-1970s and early-1980s punk rock subculture from Penelope Spheeris is a technically sound and totally stimulating dissertation on an influential and, at the time, totally ignored convention.

This almost uncomfortably close-up look at the Los Angeles punk scene––the title of which refers to a 1970s Lester Bangs piece on the Stooges for Creem magazine––may well have had uptight members of society fearing the collapse of Western culture, but truth be told, the interviews presented here are frequently very funny (though perhaps not always intentionally so), and the performance footage from the likes of Alice Bag Band, Black Flag, Catholic Discipline, Fear, Germs, and X are artfully captured and impressively presented.

True, LAPD Chief of Police Daryl Gates penned a letter in 1981 insisting that the film never again be screened in LA––even going so far as to shut down Hollywood Boulevard as a “precautionary measure”––Spheeris’ film was largely met with critical acclaim that gave the scene validation and assiduity, as well as inspiring her next film (which is up next on this list).

590
SHARES
FacebookTwitterSubscribe
Subscribe via Email or RSS Feed
Pages: 1 2
Comments (8)
Movies You Should See If You Liked "Green Room"