Director Guillermo del Toro calls Crimson Peak a “classical gothic romance ghost story” and rightfully so, it is an ambitious love letter to Classical Gothic novels and stories like Frankenstein, The Tell-Tale Heart, and The Castle of Otranto to name a few. However, it seems that a straight translation of these novels’ conventions to script succeeds in channeling the horror, grotesque, and physical constructions, but fails to grasp the suspense, mysterious allure, and surprises that are essential to these texts.

Crimson Peak triumphs as a modern Gothic construction, but the machinations behind its storytelling are oftentimes dull and transparent. Despite being obvious from the start, del Toro pushes for suspense surrounding the siblings’ secrets and intentions as well as spend an unnecessarily long amount of time on the events preceding the action in Allerdale Hall.

Cinematographer Dan Lausten combines both warm and cool lighting setups to shine on the actors from different angles in order to evoke the Giallo richness in color contrast while being faithful to the texture of Crimson Peak’s influences’ material.

Production design Thomas E. Sanders’ creation of the Allerdale Hall mansion is nothing short of astonishing, and along with the next entry, the main reason this is a “Better Visuals” and not a “Better Cinematography” list. The walls and corners of Sanders’ Gothic invention just ooze with dark passions, particularly the master bedroom, whose cramped proportion and sumptuous design of both the ceiling and bed set, cast the impression of stalactites closing in on a ghastly cave mouth.

Similarly, Sanders’ pays a meticulous attention and style to the hallways, tapestries, candelabras, bathtub, and windows’ positions that are altogether reminiscent of German Expressionism. Ultimately, del Toro’s monumental achievement in production design embodies, and for the most part captures, the dark sensuous aura Crimson Peak’s main influences described through words. 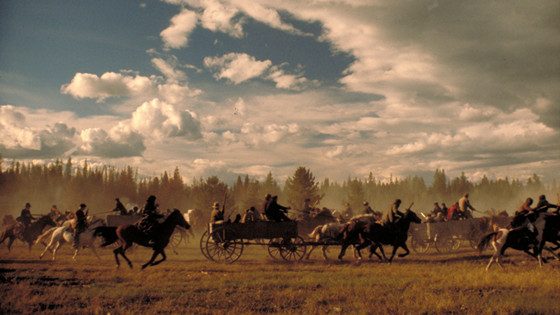 Despite receiving newfound critical acclaim in the last decade, Heaven’s Gate remains one of the most controversial films today. Director Michael Cimino’s epic western was almost 4 hours long (219 minutes) at the time of its theatrical release, and was heavily panned by critics. In terms of script, some of the criticism included uninspired dialogue, the protagonist’s sloppy development as a relatable character, as well as his indefinite relationship with Christopher Walken’s Nathan Champion, and cultural inconsistencies regarding the Johnson County War in which is based on.

However, if there is something that cannot be denied at the time of its release was its impressive large-scale production value. This film’s scope in production and costume design (credited to Tambi Larsen and Allen Highfill respectively) for the elaborated set to resemble the cabins and wooden settlements of late 19th century Wyoming is as ambitious as it is brilliant.

What is perhaps Cimino’s greatest trait in Heaven’s Gate was his ability to manage background groups (extras) to perform large-scale choreographies. During the graduation dance ceremony scene, there is a colorful courtyard in which every angle reveals all parties’ performances choreographed to the same rhythm.

Opposite in tone to the grace of former sequence is Champion’s last stand against Sam Waterston’s antagonist Frank Canton and his hired men. Before becoming an overused trope in many western and gangster films, Walken’s passion driven stance as he endures bullets just meters away from the flames of his own cabin is among the most, if not the most powerful image in this film.

Kurosawa’s Dreams is essentially a compilation of eight short films, each following the late director’s eponymous dreams. These short films – that behave more like vignettes – have no relation to each other in terms of continuous narrative. Instead, they explore themes of childhood, death, regret, and wistfulness.

Dreams unfold as thoughts and fleeting anecdotes rather than self-contained stories. Furthermore, these short films, some more than others, place a great deal of didacticism in asking rhetorical and ontological questions rather than providing answers. For this reason, some viewers criticize and interpret Dreams as a seemingly aimless bundle of fragments.

In what would be otherwise thoughts wrote on paper, Kurosawa is successful in creating a dreamscape through the association between imagery and consciousness. This notion is evident in the first vignette, Sunshine Through the Rain that goes to show Kurosawa’s careful attention to composition and color scheme as well as cleverly using mist and smoke to convey a notion of effervescence in the imagery.

There is plenty of symbolism and bizarre imagery to appreciate throughout this anthology including gauzy rainbows, anti-tank demon dog, mutants, living dolls and erupting volcanoes. There is a particularly brilliant vignette, Crows that had its hero enter a world of paintings, have a fanciful encounter with Vincent van Gogh (Martin Scorsese in a cameo) and then have him wander through the surreal landscapes and impressionist wheatfields inspired in the Dutch painter’s paintings.

This list would not be complete without Refn’s infamous Only God Forgives. To put it in a few words, Refn’s neon extravagant anti-revenge thriller unfolds, for the most part, in a string of aimless visions, premonitions, or dreams led by non-relatable and passionless characters.

What is comprehensible is Refn’s attempt to indulge voyeurism towards violence by showing its uncensored brutality to the satisfaction of both personal gain and the justice. This dual concept is echoed in the production design: the desolated tunnels, dragon-patterned walls, blue-and-red neon contrasts altogether cast the impression of a marriage between hell and divinity.

What Only God Forgives lacks in substance it compensates through the stylized cinematography of its premise. Refn is reunited with Bronson cinematographer Larry Smith, whose hypnotic camera slowly hovers inside tunnels and empty spaces.

Also the cinematographer of Kubrick’s Eyes Wide Shut, Smith brings a similar dreamlike sexual eeriness as well as symmetry to the compositions of this film, particularly in the scenes featuring Julian’s (Ryan Gosling) lustful contemplation of his favorite prostitute and infatuation, Mia (Rhata Phongam).

Only God Forgives’ best efforts are spent in the fight between Julian and Pansringarm’s God incarnate, Chang. Cliff Martinez’ synthesizers contributes to the tone of this slow motion build up. Once it begins, the fight itself unfolds through a series of long and overhead shots, perhaps to isolate and display Julian’s futility against the supernatural forces embodied by Chang.

Ultimately, Only God Forgives is essentially a silent film that would benefit as a pure silent film, since it is its unadulterated depiction of violence that proves to be the most legible context.

If the philosophical and ethological ideas that shape Malick’s The Tree of Life are a fickle matter, a discourse that separates both the visual portrayal and script from the premise is a conundrum.

The Tree of Life is essentially an experience that encapsulates all existence inside the microscope of a family’s lives. In contrast to To the Wonder that depends on the enclosures of personal conflict, The Tree of Life includes personal struggle as well, but in some ways escapes the narrative structure by including onto itself all that surrounds it.

The Tree of Life encompasses a chain of being that starts with the cosmos, prehistoric life, the O’ Brien’s lives, their death, and concludes with a light flicker suggesting the end of life. Throughout this journey, Malick represents both reality and the imaginary with equal perception. Cinematographer Lubezki dismantles conventional compositions and the rule of thirds to add naturalist texture and vigor to every frame.

Production Designer Jack Fisk carefully designs the space to seamlessly fit in the lives of a 1940s American midlands oriented family. By grasping to as much verisimilitude as possible through the camera, Malick aims to invoke meditation and appreciation of life’s infinitesimal place in the eternity that is time.

For this reason, in the case of Malick’s magnum opus, visual representation and script narrative are virtually inseparable. It replaces structure with a long sequence of images – the chronology of time – that is indeed the storytelling. In many ways, Malick’s The Tree of Life is a modern example of the Hitchcockian Pure Cinema that captures the flow of time in just a few images.

Author Bio: Fran Zayas is about to earn a Bachelor’s degree in English Literature and plans to continue his education and practice to become a professional filmmaker. During his leisure, he cannot decide between watching, reading or shooting films.