We’ve all been there. You have the most incredible, entertaining, and spectacular idea for a film, but when you sit down to write it, you lack the inspiration to bring your ideas to a written form. Well, Taste Of Cinema has got you covered! Below are the 10 films to watch for inspiration when writing a screenplay.

Inspiration takes on many forms, often times in art. These films are the best to watch for inspiration when writing a script for a variety of reasons, whether the dialogue is written to perfection in regards to the characters or story, the cinematography is composed of vivid and thought provoking imagery, or the plot itself is imaginative, lyrical, and entertaining. It’s been said that you can’t rush inspiration, but the films listed below may set your preverbal creative gears into motion.

The only Italian Film on this list is also perhaps the most nostalgic. Giuseppe Tornatore’s emotional masterpiece follows a famous Italian filmmaker as he returns to his Sicilian hometown to attend the funeral of the local projectionist whom he was very close with as a boy. Often told through flashbacks of his youth, Cinema Paradiso is a lyrical monument of world cinema. By its end, you will be just as speechless as the protagonist. 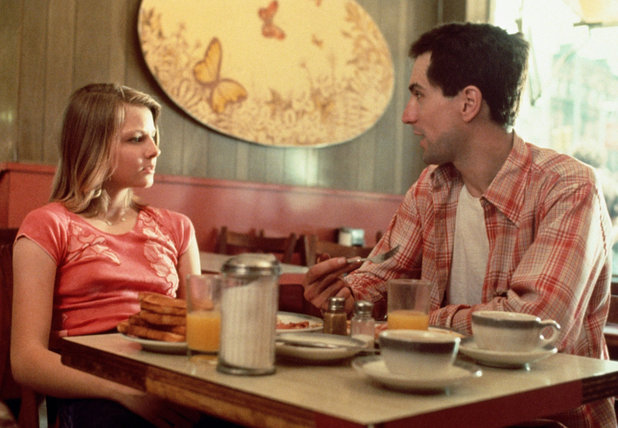 Martin Scorsese’s dark and complex masterpiece follows a Vietnam War veteran turned late-night cab driver in New York City in the late 1970s. Throughout his nightly encounters, we slowly see his faith in humanity dwindle and his descent into insanity, culminating with one of the greatest finales in cinema history.

Taxi Driver can be a great source of inspiration when writing a script because it shows that a film with few characters can have as much complexity and as much of an impact as one with several. In addition, the visuals, lighting, and sound create a very specific and engaging atmosphere, which makes the protagonist’s world seem real, something great filmmakers do with all their works.

If you’re writing a script with few characters and struggling with some aspects of it, watch Taxi Driver and it should get you on the right track.

The Social Network can be a source of inspiration when screenwriting because it showcases how a story can be told almost entirely through dialogue, rather than action, almost shattering the age-old adage “Show don’t tell”. If you’re having trouble writing a scene that is dialogue heavy, watch the Social Network.

Just as its subject matter, the film stands as an example of innovation. Innovation should always be welcome in the creative process. After all, writing a script is making something completely new, creating a symphony of words and actions from nothingness. So with that logic in mind, watch the Social Network for inspiration when writing your next script.

How could this one not make the list? Orson Welles’ famously first endeavor into the world of cinema is nothing short of spectacular. Citizen Kane’s visionary use of non-linear storytelling investigates newspaper mogul Charles Foster Kane’s final word, “Rosebud”, through interviews with people who knew him the most. However by the end, it leaves the audience wondering if anyone truly knew him at all.

Citizen Kane should be watched for inspiration when writing a script for a few reasons. First off, first time filmmakers and actors created it. This can provide a great source of inspiration to long time writers and beginners alike, as it proves that experience doesn’t necessarily guarantee success, rather everyone has a chance to make a great film. The fact that Orson Welles, a radio innovator, tried his luck in cinema and created one of the greatest films of all time is pretty inspiring in it’s own right.

In addition, examining the historical context of the film should only add to that inspiration. Comparing Citizen Kane to its contemporaries shows just how different this picture was; take the next few examples for instance. The plot is non-linear, every film before it was told in the traditional narrative style in which events unfold one after the other in relation to time. The cinematography utilizes depth of field better than any before or arguably after it.

If you’re writing an abstract or more imaginative script and having trouble working out the kinks, look to Citizen Kane for inspiration, whether for the history of the film itself, the plot, first time directing and acting, or cinematography.

Quentin Tarantino’s 1994 non-linear and mega-quotable masterpiece centers on two hit men, a boxer who threw the big fight, a gangster boss, his wife, and a mysterious briefcase of which the contents are never known.

Pulp Fiction should be watched for inspiration when writing a script because the characters are well developed, the dialogue is shockingly entertaining and original, and it’s one of the most unique films ever made.

In addition, it doesn’t follow the traditional rules for making a screenplay, as characters often speak for the sake of speaking, rather than to get plot points across to the audience. Whether you’re writing a comedy, drama, or mystery with a wide range of characters and events, give Pulp Fiction the viewing it deserves.