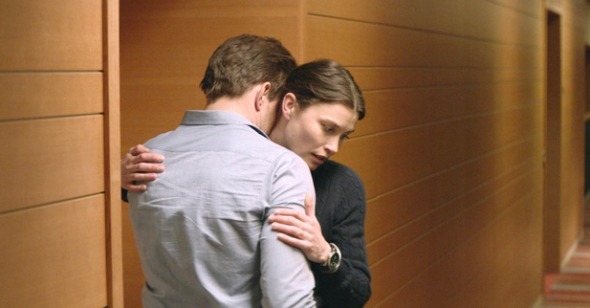 It was Abraham Lincoln who once said, “Marriage is neither heaven nor hell, it is simply purgatory.” Lincoln didn’t live to see the birth of cinema, but this quote of his is manifested in the 10 film outlined in this list. They will no doubt push any viewer to the breaking point and let them see the darker side of marriage.

The story of Dean and Cindy’s relationship in Blue Valentine has a Cassavetian rawness to it. The film is an examination of a damaged relationship. It alternates between past and present, juxtaposing the ecstasy of new romance with hardships of married life.

Director Derek Cianfrance and DP Andrij Parekh emphasises the transformation of their relationship through the way they shoot the film. The past is shot using a 50mm lens on 16mm film. The image a 50mm lens produces is closest to how the human eye perceives life, thus putting us in the impulsive moments of love Dean and Cindy experience.

By shotting 16mm stock, the scenes feel aged and full of nostalgia. They are beautiful and heart-warming, but unreachable now. The present is shot on digital using long zoom lenses. The rigid clarity of digital has none of the underlying passion of the past scenes, and the zoom lenses isolates Dean and Cindy from each other into their own world of despair and agony. The present will never be as good as the past.

Ryan Gosling and Michelle Williams’ performances shows the lovers’ progression into over-thinking and selfishness. We feel tormented with them as they fall apart, yell at each other, and doubt themselves. But the most traumatic element of the failed relationship is how their daughter Frankie will grow up. In the end, she runs back to her mother, crying “I love him,” as a tattered Dean walks into the fog.

Stanley Kubrick screened a completed cut of Eyes Wide Shut to Warner Brothers executives on March 1st, 1999. He passed away on March 7th. His family said that he was extremely proud of the film, and apparently considered it his “greatest contribution to the art of cinema.” The plot revolves around a bourgeois New York couple: a doctor and an art curator (played by then real-life couple Tom Cruise and Nicole Kidman). Alice tells Bill that she once almost cheated on him, which propels Bill to go on a night-long odyssey of warped sexuality.

This film is about fear and desire, coincidently (or maybe not) the title of Kubrick’s first feature. Alice and Bill are afraid of their sexual desires, and the way they view each other when the desires are uncovered lead to irrational behaviour. Kubrick does not show marriage in a raw way like Blue Valentine does. His film is surreal and dreamlike, as we follow Bill on his journey of self-discovery.

It paints marriage as a clashing of egos. When both egos are kept proud, everything is alright. As soon as one of the lovers’ ego is attacked, the marriage is in danger. The character names may have significance; Alice refers to Alice in Wonderland, Bill has a connotation of money, a musician named Nightingale… the password he gives Bill is Fidelio, which is the title of Beethoven’s only opera. The story of the opera involves a woman putting on a disguise to free her imprisoned husband. I’ll let you ponder that yourself.

Toward the beginning of the film, two women attempt to seduce Bill and when asked where they are taking him, one of them replies with “where the rainbow ends.” The costume store Bill later buys his outfit for the sex party is called Rainbow, has a rainbow drawn on the sign, and even says ‘Under the Rainbow’. Kubrick is being pretty conspicuous here for it not to mean something.

Interesting to note is also that Bill comes into contact with 7 women throughout the night- there are 7 colours in a rainbow. The abundance of symbolism to decipher in the film may be debated until the end of cinema itself. There really isn’t a ‘right’ way to look at this film, except that it shows marriage in a different light.

Celine (Julie Delpy) and Jesse (Ethan Hawke) met on a train to Vienna twenty years ago in Before Sunrise. They meet a decade later in Paris in Before Sunset. And most recently, in Richard Linklater’s conclusion to his Before Trilogy, Celine and Jesse are married with twin girls, and enjoying a family vacation in Greece. The first film was about a chance connection, and how fleeting moments can feel monumental. In the second film, the two characters are more mature and talk candidly about the dissatisfaction of their professional and personal lives. It was a painful rumination on adulthood.

Before Midnight is a look at how to move past the disappointment in life and continue to rekindle the passion one has as youth. It grapples with the complexities of maintaining a love for your partner. Linklater and his actors portray married life as realistically as possible, and through the characters’ conversations, we look back at our own lives and wonder, what happens to marriage when love is fading?

Jean-Luc Godard has always been fascinated by male-female relationships. Many see Contempt as the pinnacle of his exploration on the subject. It is about Paul, who is hired by a Hollywood producer (played by Jack Palance) to rework the script of an adaptation of The Odyssey directed by Fritz Lang (playing himself).

During this process, Paul’s marriage with his wife Camille disintegrates and she becomes contemptuous towards him. Working on a significant larger budget than before, Contempt was only Godard’s second film shot both in Cinemascope and colour. Paired with the beautiful view from the Casa Malaparte seaside house on Capri, the film’s ravishing beauty only increases the heartbreak of the worsening marriage.

Set to Georges Delerue’s stirring music, The film’s centrepiece is a 30-minute sequence in an apartment building with Paul and Camille arguing over everything and nothing. They are nearly always on screen at the same time, but isolated to either side by another object.

The way the Cinemascope frame visually separates them become a representation of the barrier that’s come between them. It is not known why Camille is suddenly repulsed by her husband. Paul says that “yesterday you still loved me,” but Camille knows that “now it’s over.” They both know there’s a reason, but they don’t know what it is. It climaxes with Camille saying “I have nothing but contempt for you.”

The question that Contempt asks is where that emotion comes from, and why one day a marriage is fine, the next it’s over. In a recent documentary, Godard says that while making the film he was telling himself “I don’t know what contempt is,” and now 50 years later, he still doesn’t know.

Some critics say that the film is an introspective look at Godard’s own marriage at the time, which was on the verge of falling apart. Karina and Godard divorced 2 years after the release of Contempt. Godard also used the intertextual references to The Odyssey as a template for the marriage. It is suggested that The Odyssey is actually about a woman’s contempt for her absent husband. In this analogy, Paul is Ulysses and Camille is Penelope.

If the real life parallel is to be believed, then Godard is saying that he is Ulysses and his wife Anna Karina is Penelope. The parallel to mythic figures is ironic as these are people all under the influence of human emotion. Perhaps all of this is foreshadowed in the first scene of the film, in which Paul tells Camille that he loves her “totally, tenderly, tragically.” That last word is the key to it all.

Warning: Spoilers ahead. “Marriage is hard work,” says Amy. Gone Girl is presented as a mystery film but is actually a satire on marriage. A message of the film is that marriages often don’t work out due to gender roles and expectations. In a voice-over monologue in the middle of the film, Amy (Rosamund Pike) reveals why she decided to frame her husband for her own (fake) murder.

For Nick (Ben Affleck), Amy was willing to play “cool girl”. According to her, that’s the defining compliment a man can give. “Cool girl is hot. Cool girl is game. Cool girl is fun. Cool girl never gets angry at her man.” When she pretended, they were happy. She “forged the man of my dreams. We were happy pretending to be other people.”

Marriage is role-playing in Amy’s opinion. And as soon as that ended, or got tedious, marriage was insufferable and her husband had to “suffer consequences.” Nick was only able to stop Amy from completing her plan by pretending again, to be the man she idealised. Nick yells at her in the end, “all we did was resent each other, try to control each other. We caused each other pain.” And what does Amy reply with? “That’s marriage.”

590
SHARES
FacebookTwitterSubscribe
Subscribe via Email or RSS Feed
Pages: 1 2
Comments (8)
Great Movies That Will Make You Lose Faith In Marriage