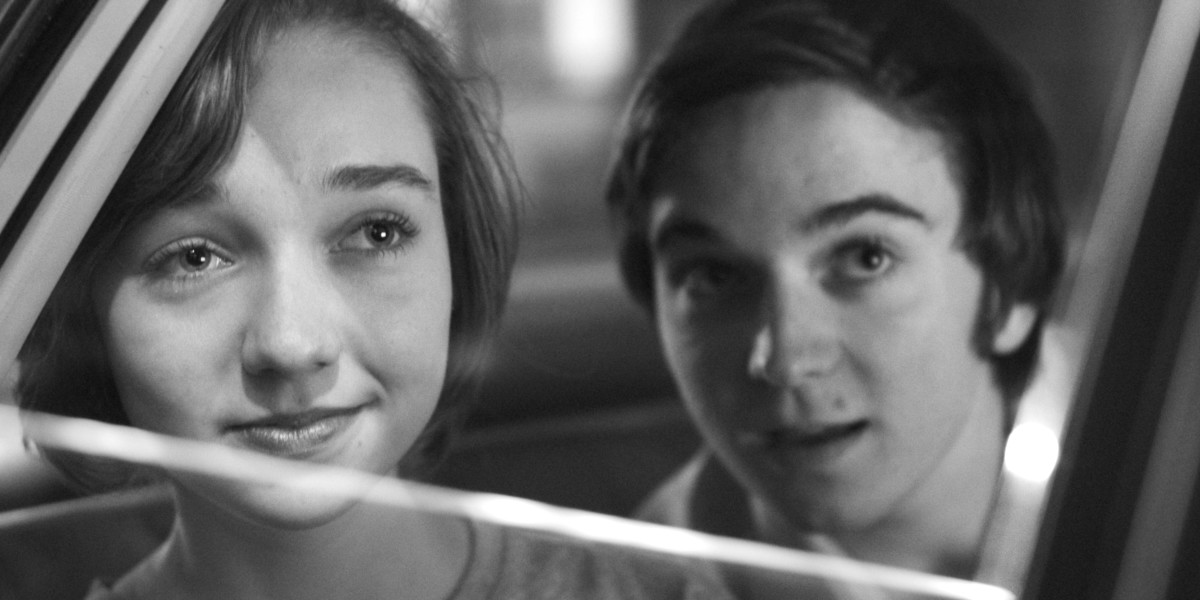 Something of an illustrious symbol of Canadian cult cinema thanks to films like Highway 61 (1991), Hard Core Logo (1996) and Pontypool (2009), Bruce McDonald kinda sorta revisits his earlier catalogue with his latest film. 1989’s Roadkill was an idiosyncratic road movie with an indelible soundtrack and shot in black-and-white and the same can be said of Weirdos. And for a while the film just swims along before things get uneven.

Written by Daniel MacIvor (who worked with McDonald on the 90s TV show Twitch City and 2010 feature Trigger), Weirdo is set and opens in 1976 Nova Scotia, in the small town of Antigonish, on July 3 to be exact.

Here in this sleepy little town the teens have angst and ennui and not least amongst them is Kit (Dylan Authors, excellent) who lives with dad, Dave (Allan Hawco), a social studies teacher at the high school, and his grandma (Cathy Jones). Aided by his agreeable and discerning girlfriend Alice (Julia Sarah Stone, beyond question the best part of the film), the two plan to hitchhike to Sydney to live with his estranged mother (Molly Parker).

The elements are all in place, cinematographer Becky Parsons’ monochrome lensing is suitably irresistible, period details are delightful, and the soundtrack celestially nostalgic (early 70s hits from Nilsson, and CanCon favorites by Lighthouse, Rush, and Edward Bear help get us there).

And yet with so much right where and why exactly does Weirdos go off the rails? Well, there’s an abundance of indie film clichés that irk and rasp in increments that gradually get in the way. Kit is alienated to the point that he has a quirky imaginary friend, a “spirit animal” that’s a simulacrum of Andy Warhol (Rhys Bevan-John) who imparts such choice wisdom nuggets as “we’re all weirdos, that’s what makes us beautiful.” That and Warhol keeps coming back again and again like a bad penny.

Then, where Weirdos comes to a grinding, screeching, nails-etched-into-the-steering-wheel halt is when our likeable leads make it to their destination at Kit’s mother’s house. When we first see her she’s fluttering about in her yard dancing wildly to an 8-track, in a tattered dress, barefoot, and being bohemian, airish, and unnatural AF.

She’s just too manic pixie––when will this cliché die?––and Parker’s performances isn’t just over-the-top, it stops the film cold. Next she invites Kit and Alice into her commune-style home that she shares with other pretentious phonies (thankfully we only meet one, but unfortunately he’s didactic, angry, and gives an overlong sermon on the Khmer Rouge).

For the most part, Kit and Alice make it through the third act unscathed and a touching and pivotal plot point is well handled and insures certain young audience members will find some inspiration in what unspools. No spoilers but here’s a few hints; Kit doesn’t pack much in his suitcase but he does bring a hairdryer, and he keeps coming up with reasons not to have sex with Alice.

Weirdos begins with energy, charm, and plenty of charisma and then grievously goes off-track––mired by a melange of spent clichés, and enervated stereotypes––and then unfortunately never really resumes.