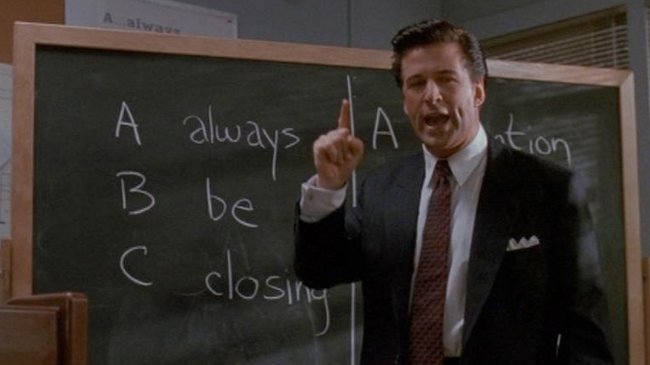 Adapted from his own 1984 Pulitzer Prize and Tony Award winning play, David Mamet’s comedy-drama “Glengarry Glenn Ross” directed by James Foley follows the lives of four, desperate real estate salesmen who are “motivated” through constant profane verbal abuse by Blake (Alec Baldwin) to sell as much as they can because within one week, all except the top two salesmen will be fired. The top two are promised prizes and the best leads.

The real estate salesmen include; Shelley “The Machine” Levene (Jack Lemmon), a once-hotshot 60-something salesman whose numbers have been declining, Dave Moss (Ed Harris), George Aaronow (Arkin) and “the closer” Ricky Roma (Al Pacino). Their office manager, John Williamson (Kevin Spacey) has all the prime Glengarry leads which could help them.

Moss and Aaronow contemplate about stealing the leads from Williamson’s office, which could save their jobs. The film is full of humour, imaginative profanity, cycles of interrogation and the characters scrambling to sell real estate as they become more and more desperate in their simultaneous breakdowns.

Al Pacino was nominated for an Academy Award and a Golden Globe for Best Supporting Actor for his work in the film.

He is the only person in his world who knows this is happening, and becomes so frustrated and sick of the day that he goes through periods of dismay, revolt, suicidal self-destruction and cynical recklessness – until he begins to learn from his daily mistakes and starts to learn more about himself and about others – including the lovely producer Rita (Andie MacDowell) and his patient cameraman Larry (Chris Elliott).

The routine starts at 6 a.m. with the alarm clock singing Sonny and Cher’s “I Got You Babe,” He goes through a series of experiences: meeting an insistent old classmate, stepping into an icy puddle, and performing a stand-up on camera in front of the groundhog. Phil is fed up with this stupid assignment and just wants to get out of this town, except he wakes up to the same song, meets the same friend and walks into the same puddle all over again.

Ryan Coogler’s directorial debut depicts Oscar Grant III’s last day of his life before he was killed by BART police officer Johannes Mehserle in the early morning hours of New Year’s Day 2009. The biographical drama begins with the actual footage of 22-year-old Grant and his friends being detained before the shooting.

The haunting atmosphere of the inevitable truth carries the film as Oscar’s (Michael B. Jordan) daily routine and pressures try push him down as he tries to get a job, be there for his mother (Octavia Spencer), and his girlfriend (Melonie Diaz), take care of his daughter and pay the bills.

Close to dealing pot to get by after losing his job at the supermarket, Oscar tries to tame his explosive side by thinking of the consequences and the harm it would cause to his loved ones.

Oscar’s inherent goodness is brilliantly translated through Jordan’s performance and Coogler’s direction which shows how Oscar’s freedom was determined by a superficial impression.

Mathieu Kassovitz’s French black-and-white drama “Hate” follows three young friends from immigrant families who spend an aimless day in the aftermath of a police brutality riot in the suburbs of Paris.

The gangster ready Jewish Vinz (Vincent Cassel) is filled with furious rage intent on winning respect by killing a cop. The mature, quiet Hubert (Hubert Koundé) is an Afro-French boxer and small time drug dealer, whose gymnasium was burned during riots.

The lighthearted Saïd (Saïd Taghmaoui) is an Arab Maghrebi who tries to mediate his two friends’ contrasting opinions about life in the ghetto.

The film depicts approximately 19 hours of the friends struggling to entertain themselves after their friend Abdul was shot by a policeman. The group continuously finds trouble whether it’s from skinheads, policemen or anyone Vinz provokes. It won César Awards for Best Film and Best Editing, as well as Best Director at Cannes. 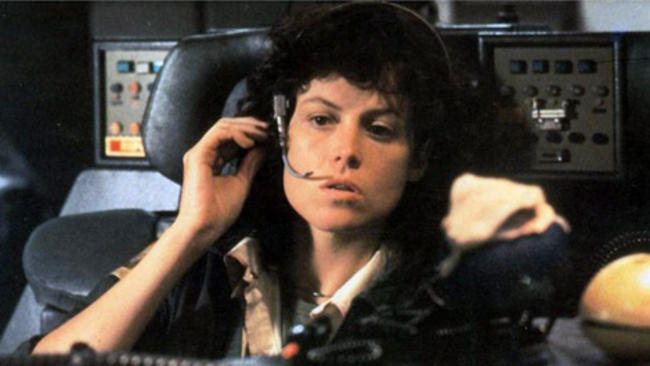 They detect a mysterious transmission from a nearby planetoid, and Dallas, Kane, and Lambert head out to investigate, damaging their ship upon landing. They discover the remains of a large alien creature whose ribcage appears to have exploded from the inside. Ripley quickly determines that the transmission was not a distress signal but a warning. However, the alien may already be on board.

Alien greatly succeeds in its story, its pacing, its visual effects (for which it won an Oscar ) and its characters who have become pop icons.

Agnès Varda’s Left Bank drama follows a young singer, Florence “Cléo” Victoire (Corinne Marchand), over one and a half from 5pm to 6:30pm on June 21, as she waits to hear the results of a medical test that will possibly confirm a diagnosis of cancer. The audience sits and waits 90 minutes with her in real time.

The film is noted for its existentialism and its strong feminine viewpoint. The characters have discussions of mortality, despair and life. Varda is one of the major sources and influences for the French New Wave, her films are surprisingly modern, even in today’s context.

Trained as a serious photographer, Varda’s composition is quitely perfect as her lighting and placement in space serves to enhance the characters, their dialogue and their underlying emotions.

Before his Star Wars Boom, George Lucas created this nostalgic, coming-of-age comedy-drama that follows a group of teenagers over a single evening during 1962.

The recent high school graduates and friends, Curt Henderson (Richard Dreyfuss), Steve Bolander (Ron Howard), John Milner (Paul Le Mat) and Terry “The Toad” Fields (Charles Martin Smith) meet at the local Mel’s Drive-In. Best friends Curt and Steve are supposed to move northeast to begin college, but even though Curt has a scholarship, he is still unsure about going.

Steve is also uncertain about his life, specifically about his girlfriend Laurie (Cindy Williams).He suggests that they see other people while is away so as to strengthen their relationship – which doesn’t play well with Laurie.

The night follows all the characters as they try to make the most of their last night in town, or the first night with a borrowed 1958 Chevrolet Impala. They try to pick up girls, get over them and get rid of them all to the constant soundtrack of DJ Wolfman Jack who supplies the film with many iconic songs and helped set the mood to many scenes. The film also includes one of Harrison Ford’s first feature film appearances. A sequel, More American Graffiti, was released in 1979.