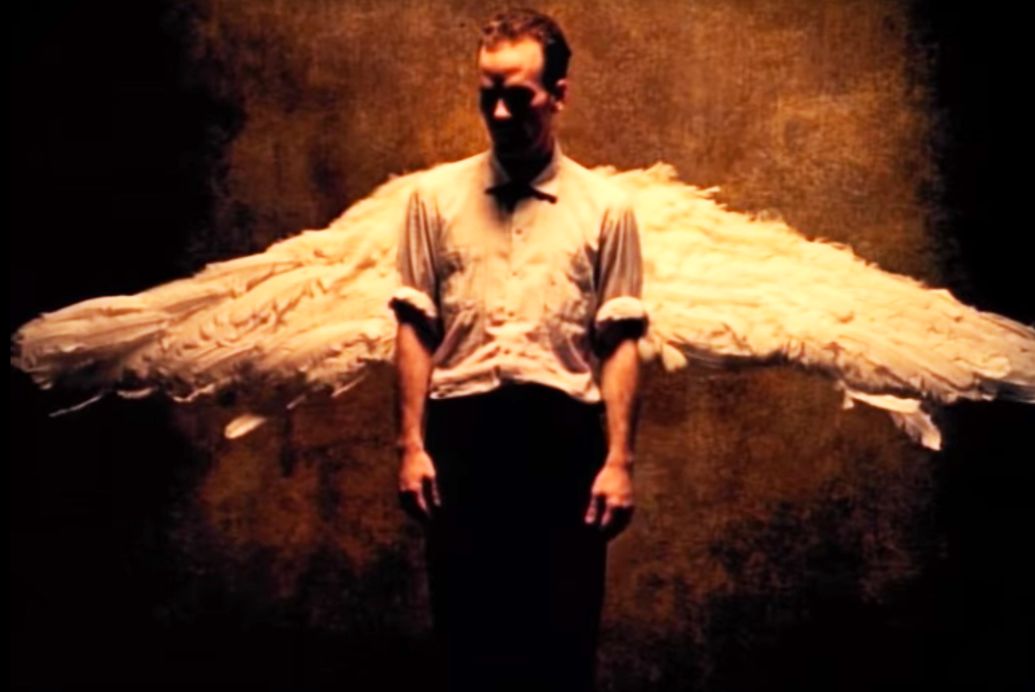 In a 1993 review of the serial killer picture ‘Kalifornia’, Rolling Stone lamented the dearth of genuine stylists in film as a result of the movie industry being infiltrated by directors who made their cinematic bones creating music videos for MTV.(Kalifornia’s director, Dominic Cena, directed and photographed videos for such MTV luminaries as Sting and Richard Marx. Cena’s most notable creation was Janet Jackson’s ‘Rhythm Nation’ clip.)

Often criticized as being commercially crass, as well as signaling the death knell of teenage imagination, music video was viewed as the proverbial red headed step child of the legitimate cinema by the leather elbow patch set.

The heck with those guys. The truth is that some of the best filmmaking of the ’80’s and ’90’s didn’t require a trip to either the local mall Cineplex or a Manhattan art house.

Culture critic and all around bad ass Rob Sheffield once opined that the only culture from the ’80’s that lasted was disposable teenage culture, such as the coming-of-age films of jukebox auteur, John Hughes. Using Sheffield’s razor, nothing was more juvenile and disposable, and therefore more timeless, than the medium of music video.

Aspiring filmmakers of MTV’s classic period (For our purposes here, the years that passed between the cable channel’s 1981 debut and the introduction of the groundbreaking, yet ultimately music video programming killing MTV reality show ‘The Real World’ in the Fall of 1992. And, maybe just a few years beyond.) didn’t need to drop out of UCLA film school to have their intellectual coats pulled to the value of beautiful cinematography, imaginative storytelling and Tawny Kitaen.

All a kid that appreciated the art of film had to do was ditch school, pop open a Jolt cola, plop themselves down on the couch, turn on MTV and throw the remote toward the far, unreachable shore of their parents’ imported suede sectional for the remainder of the afternoon.

Most effective music videos could also work as silent film comedies. Jane’s Addiction lead singer Perry Farrell and his band mates sway in time to the ocean sized bass groove of the band’s in house secret weapon, Eric A. (Noted rock critic and Marshall stack philosopher, Chuck Eddy once described ‘Been Caught Stealing’ as “Ringing my bell like the Stooges if they’d have stuck around long enough to go disco.”)

As bad a jam as the song is, if you turn down the volume all the way on YouTube, you’ve still got yourself a three minutes and change morality play that combines the silent comedy stylings of Buster Keaton with the demented sensibilities of John Waters.

Directed by then Farrell paramour, Casey Niccoli (who may still be considered Farrell’s spouse in the eyes of Santeria hard liners that watched the pair get married in the band’s ‘Classic Girl’ vid from the same era), this funny and irreverent clip showcases a dubious Monty Python/Kids In The Hall female impersonator who liberates overripe produce from a Los Angeles area bodega by secreting said produce away in the cavern of a fake pregnancy belly.

Arguably an even more ingenuous and effective tribute to the work of silent era sci-fi pioneer George Melies than Martin Scorsese’s 2011 film ‘Hugo’, this 1995 clip seemingly has nothing to do with the Smashing Pumpkins song which it is ladled on top of, beyond the fact that both the lush strings of Billy Corgan’s pop rock magnum opus and the video’s retro future visuals pay heartfelt homage to the gentle and imaginative dreamscape of Melies.

Often referred to as the Three Stooges of rap, a more apt description of the Beasties would be to call them the Marx Bros of rap.

The group’s debut album went diamond platinum at least in part because the Beasties proved as adept at film making and acting (See the group’s “Fight For Your Right To Party” clip, arguably the best film comedy of 1986) as they were at rapping.

‘Sabotage’ is the Beasties equivalent to the Marx Bros ‘Duck Soup’, a spot on, anarchic comic masterpiece that puts the Beasties’ love of all things 70’s – from Kung Fu movies to cheesy cop shows- on vivid display.

Years before he directed neo-noir classics such as ‘Se7en’ and ‘the Game’, David Fincher made this gritty, atmospheric four minute indictment of incest and America’s tendency to solve problems with gun violence – a video that aired once-an-hour, every hour, on both MTV and VH1.

Queen beat music video arch-maven Madonna to an homage of Fritz Lang’s 1927 science fiction masterpiece ‘Metropolis’ by a good six years. (‘Express Yourself’, Madge’s much more expensive and more sexualized take on ‘Metropolis’ wouldn’t drop until the summer of 1990.)

The members of Queen fly above the accursed technological dystopia in a hover car and somehow pay tribute to their love of radio at the same time.

Admittedly, this video is a chick flick. It cuts back and forth between color and black and white as a supple young Madge attempts to balance her love life with her bourgeoning modeling career.

By day, Madonna skips around Manhattan with her smoldering street urchin boyfriend stopping only to make out and watch kids break dance. A very 1984 day in the toniest of the five boroughs.

By night, she makes her cheddar modeling ridiculous hats and old timey Jersey shore swim wear that modestly conceal her ankles from the leering eyes of strangers.

Still, her dreamy street tough boyfriend doesn’t quite trust the scumbag photographer that plucked Madge up from the streets to make her a star. As well he shouldn’t.

Maybe 1990’s “Express Yourself” was much more of a movie-like event. Yet, this charming clip is a throwback to the halcyon days when Madonna was still so fresh and so clean and not as über rich or power mad as she would someday become.

This video is a mixture of disposable comedy classics ‘Animal House’ and ‘Fast Times And Ridgemont High’ cooked down to their very essence, combined with the exhilarating good natured fun of a kid’s first trip to a strip club.

Much closer in character to Jerry Lewis than Jerry Lee Lewis, Diamond Dave was always more comfortable with music videos than the other members of Van Halen and his Catskill mojo is on full neon display here*.

Some years later, due to his skill in writing and directing comic videos such as this selection ‘Just A Gigolo’ and ‘California Girls’, DLR was allegedly given a ten million dollar budget to make a film in which he would play a rock star exploited by mad scientists for the purposes of making the other Caucasians on planet earth just a little bit funkier.

Even in 1980’s Hollywood it seems, there wasn’t quite enough “Krell” to make that film a reality.

A mundane, yet somehow also bizarre Warhol-esque black-and-white clip of Replacements lead singer Paul Westerberg making a snuff film starring his home stereo. Nothing much else to say- just watch it.

As with most things Bowie, this video is gorgeous art house fare.

The clip was actually created a full calendar year before MTV even went on the air. Still, if ever a musician was meant to be visually celebrated it was David Bowie.

There were no set rules for music video in 1980 and so Bowie and director David Mallet (An early music video heavy weight who also directed Queen’s ‘Radio Ga Ga’) went all kinds of high concept nuts.

Old ladies walking along the beach, white doves, padded cells and other totems from deep inside the Bowie psyche are explored from various dynamic camera angles as a Greek chorus of New Romantic Bowie devotees periodically pop up to help the Thin White Duke drive home the song’s hooks.

Gloriously cheesy early ’80’s video effects make the clip literally shine. The most arresting visual is Bowie all dolled up as the original medieval creepy clown, Palliaci, marching up the beach toward the camera with his New Romantic chorus in tow while being pursued by a giant earth mover.

Director Samuel Bayer had made exactly one video for metal band Asphalt Ballet when he tripped and fell face first into history by getting hired to direct this clip.

Legend has it that Bayer couldn’t make sense of Nirvana front man Kurt Cobain’s original concept for the video, which had been inspired by Cobain’s love for 1979’s feathered hair and banana bike seat cinematic fever dream ‘Over The Edge.’ So, Bayer came up with a more simplified concept which echoed the cheerfully nihilistic “Hey kids let’s put on a show and blow up the school” ethos of the Roger Corman/Ramones collaboration “Rock N’ Roll High School.”

This video’s distinctive visual feel and muted color palette make the clip feel like one’s own memories of high school, while at the same time effectively simulating the hazy and repressed feeling of Bayer’s own tag line for the clip “The pep rally from Hell.”

It’s interesting to note that the video’s tattooed stripper “Anarchy” cheerleaders were meant to be a sight gag in 1991. Now, in 2016, when a teenager can get a tattoo with a note from their mom, it’s doubtful if a tatted cheerleading squad would even be considered all that uncommon.

Despite the video’s massive success, Bayer only went on to direct one feature length film, the 2010 reboot of “Nightmare on Elm Street.” Still, Bayer has been rewarded for his stellar efforts directing Nirvana’s breakthrough clip with a decades long career directing music videos for artists as diverse as Ozzy Osbourne, John Cougar Melloncamp and Garbage.