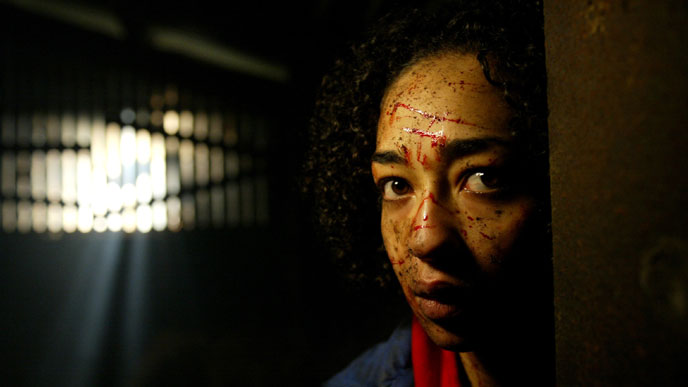 Yet another little-known title, this one made in Ireland. The story is about a cash-strapped farmer who rents his farm out to a team of scientists, who, unbeknownst to the farmer Dan, is engaging in some clandestine genetic mutations. Predictably, their experiments go horribly wrong (those darn geneticists!) and the resultant mutation escapes into the darkness of the enormous farm.

In lesser hands, this would have resulted in a formulaic, boring, predictable monster movie. However, writer/director O’Brien has crafted a terrifying 90 minutes.

After the creature escapes confinement, Dan (John Lynch) immediately quarantines the premises. The few unlucky folks who are stuck on the farm need to find the monster, and destroy it so no disease spreads. A familiar setup defies expectations to become a chilling, blood-racing search. Well filmed, and well acted, this movie rises above its plot cliches to scare the pants off patient viewers. 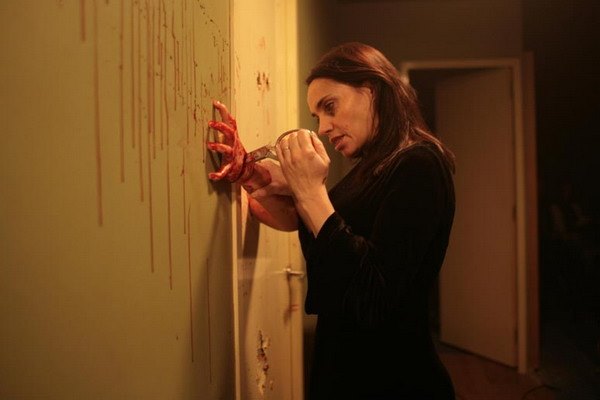 A horror film that takes place on Christmas Eve, yet has virtually nothing to do with the holiday. Now, that’s a novel idea. In this French language horror pic, a widow who is also pregnant eschews company, and decides to spend the evening alone in her dark house. Inexplicably, there’s a knock on her door. She is expecting nobody. The mysterious stranger at the door is a beautiful woman who is obviously not the widow’s friend.

Beatrice Dalle plays the stranger to perfection. While she’s obviously intent on harming Alysson Paradis’s widow, there’s a certain mystique to this visitor, almost forcing viewers to stay riveted until her motivation is revealed. Possibly predictably, the stranger wants the baby inside the sole inhabitant of the house.

The backstory that unfolds itself gradually starts coming together. That’s when things go from intensely creepy, to downright terrifying. This is likely the only movie that has shown what the unborn baby is going through while in his mother’s womb. That aspect of this film would be enough to elevate this genre film into a must-see horror classic.

Yet it’s the film’s overall pervasive sense of eeriness, accomplished by stunning cinematography and stellar acting, that you’ll be unable to forget. That, and the amazing special effects that are truly jaw-dropping. If you’re a horror fan who is wary of subtitled fare, you’ll be very pleased that you gave “Inside” a chance.

Like a lot of titles on this list, Ti West’s homage to 80s popcorn thrillers has seemed to divide viewers. However, if you’re of a certain generation who grew up with VHS rental stores featuring horror covers on large plastic cases, this film just might be your cup of Satan. It could have fallen into parody or camp. Director Ti West has enough respect for the films he is inspired by that it all works. That’s a good thing.

There is almost nothing more tortuous than sitting through the dreaded “Horror Spoof”. Thankfully, “House of the Devil” isn’t a spoof. Ti West somehow acheived a casting coupe by having Tom Noonan and Mary Woronov as a married couple in search of a babysitter.

Sam, a college coed, lured to their huge house in the country to be the sitter soon finds out that she’s been swindled. It’s not a baby she’ll be watching, but the couple’s infirm mother. Swayed by the large amount of cash they offer her, Sam decides to stay.

After the stranger-than-strange couple leave, ostensibly for a party for a lunar eclipse occurring that night, Sam wanders around the large Victorian alone. Jumping at every creak, she calms down, orders a pizza, and proceeds to dance around the house to the tune of The Fixx’s 80s classic “One Thing Leads to Another.”

The story takes its time unraveling, much to the film’s credit. You may think you know what’s actually going on, and truthfully? You’re more than likely correct. Though, even if you’ve figured out what’s going on, the film’s reveal is a surprisingly effective plot twist that deserves respect. An homage to the 80s, it still retains a newness about it that could only have been made in this century.

A British hybrid of the gangster movie, mystery, and horror genres. Director Wheatley expertly throws all these elements in the mix, and the result is a fascinating (ultimately) horror film that works in each of its labels. Two unemployed hitmen in Britain decide to take one more job. Neil Maskell and Michael Smiley play the criminals.

Their dialogue and interactions are the most important aspects of this original entry. They are given a list, a kill-list if you will, that they must carry out. Inevitably, the job takes its toll on the hitmen’s relationships, particularly Maskell’s lovely wife played by Esme Folley. As the morally questionable pair work their way down the list, the audience begins to feel that there is more at play here than meets the eye.

There’s a memorable scene where Maskell and his partner are staying at a hotel. Maskell casually looks out the upper-floor window, to the trees and field on the other side of the parking lot. He finally spots a lone woman, waving slowly to him in the distance. All he can do is return the wave, a feeling of confusion coming over him.

It’s too bad for the two that this ominous event wasn’t heeded, because as the viewers know too well, the last name on the list isn’t going to be a routine kill. However, there’s nothing routine about “Kill List”. And that’s really saying something. 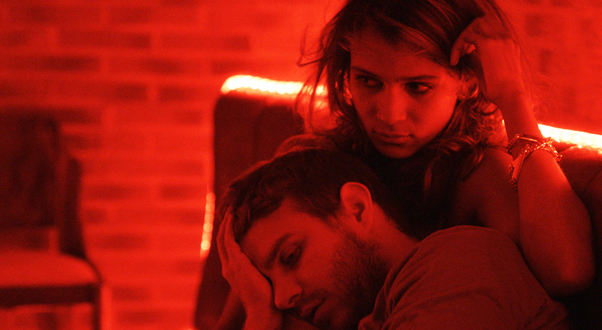 Probably the most un-horror film on this list, “Simon Killer” does however fit all the criteria to maintain its presence. After a very slow, almost lugubrious, start, first time viewers will find that they can’t stop watching.

The story was written by Campos and Brady Corbet. Simon is portrayed by Brady Corbet who also is credited as a producer and gets a “story by” credit with one other. Simon is in virtually every shot of the film. He’s an American, visiting Paris after a difficult breakup with his girlfriend.

Arriving in Paris, Simon walks the streets alone with very little money. He gets set up by a street hustler with a Parisian prostitute played by Mati Diop.

After getting to know the girl after his initial boldly-acted introduction, Simon and Diop’s character Victoria shack up at her place. Devastated by the breakup with his sweetie in America, Simon seems a little off. It isn’t until late in the film that viewers are shown what and who Simon really is. (The title’s a clue!) And it’s at this point that this movie earns its place on this list.

There’s a scene in the middle where Simon is in a French nightclub, and starts self-consciously dancing to LCD Soundsystem’s “Dance Urself Clean.” The song is perfectly used here, while Simon becomes more and more confident as it continues. It’s a great scene. Brady Corbet gives a remarkable performance. Even if you’re not 100% sure what happens at the end, there’s a zero percent chance you’ll soon regret spending two hours getting to know “Simon Killer.”

Admittedly, this was not a popular film with audiences. The terrific director Jonathan Glazer (“Sexy Beast”) uses the source novel by Michel Faber as the starting off point to a truly unique movie experiment. Scarlet Johansen plays the lead.

Director Glazer put her in such makeup and costume that the stunningly beautiful actress is almost unrecognizable playing an alien in human skin. The alien is travelling around England, looking for humans to send back to her planet. In an original twist, the “victims” are often not professional actors. They’re not only NOT actors, they’re not even aware that after accepting a ride from Johansen, driving her large black van, that they’re in a movie!

Glazer placed hidden cameras all over the cabin of the truck, in order to capture the truly real reactions of the unsuspecting guys. None of the men, at least those that made it into the film, realized who the driver really was.

All they knew was that an incredibly beautiful young lady was offering them a ride. The interplay between the non-actors and the talented female lead are fascinating, even if you don’t know that they don’t know. While there’s not much more to the plot than an alien looking for victims, the voyeur in everyone should be riveted.

The film is amazingly scored by Mica Levi, a college-age musical prodigy. It’s a minimal score, while at the same time being oddly, hypnotically strange. Sadly, most of its audience found the movie to be boring. It’s anything but. Perhaps it helps if you’ve read the original novel. Even still, time will no doubt expose “Under the Skin” to be the timeless classic it certainly will become.

The last, most recently-released title on this list, may be a huge disappointment to a lot of movie-goers. Heavily hyped months before its release, large segments of the audience were disappointed by first time writer/director Eggars’s debut. While no one denied that the director did a remarkable job on his first feature, the film’s scariness is what seems in question.

Critics liked it. Genre fans didn’t. People who were not “taken in” by the deceptively simple story and characters found the movie absolutely did not deliver on its claims.

No doubt the story, set in 1630 New-England, was a little on the difficult side in regards to understanding the accent. Yeah, it’s that heavy. The father of the recently-shunned clan (while the movie begins with the town-hearing which bans the family, no reason for this is ever presented) is awesomely played by Ralph Ineson. [Ineson had a small part on the BBC original inception of “The Office,” as David Brent’s obnoxiously arrogant sales rep Chris Finch.

Granted, he has an entirely different appearance here, his voice is unmistakable.] Great acting is all around in this film, notably the young Harvey Scrimshaw as son Caleb. It’s a hard life for these folks. Not only have they been forced out of the town, but they’ve decided to stay completely secluded, on the edge of a dark forest. No one is supposed to go near the woods, but it’s a given in this genre that rules will be broken.

Utilizing the requisite aspects of the EERIE film, the woods are one creepy looking place. Eggars smartly reuses Penderecki’s music to score the shots of the ominous woods, in an admitted nod to Kubrick and “The Shining”. This film shares that film’s sense of slow pacing and atmosphere over cheap scares. Of course, it’s not quite as good as Kubrick’s horror classic. Not quite. However, the expertly-paced plot moves along from one questionable incident to the next.

The audience is never quite sure that what’s happening isn’t all imagination or if the devil is really behind the family’s misfortunes. The scene of Caleb’s possible possession by Satan is elegant in its understated effectiveness. Scrimshaw flawlessly carries the scene with his tremendous acting. No CGI. No special effects. Well, not that are readily evident.

Audiences hearing “possession” and waiting for green pea-soup projectiles, and creative uses for a crucifix will admittedly be disappointed. Viewers with more patience will no doubt be rewarded and completely satisfied with “The Witch” and its level of dread. The ending is completely satisfying, using an ingeniously effective sense of eeriness which oozes from every frame of this soon-to-be Horror classic.

Author Bio: Christian Olson is a Chicago Comedian/Improvisor/Actor who hates writing about himself in the third person.