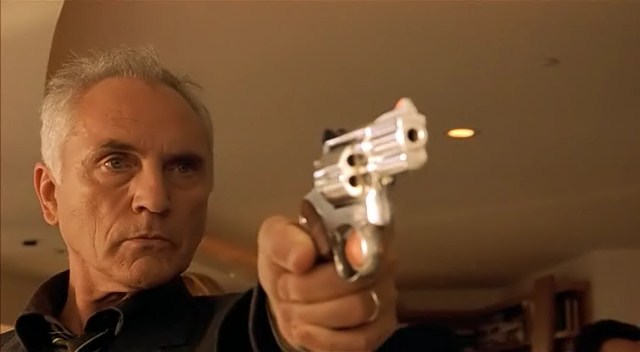 ‘The Limey’ is a good old fashioned movie with a contemporary feel. Directed by Steven Soderbergh and starring Terence Stamp as an aged gangster recently released from prison in the UK, travelling to LA to investigate and take revenge for his daughters death. The man he’s after is a record producer played by Peter Fonda who has dabbled in criminality.

Stamp’s character is a brooding throwback from the 60s era of gangsters; all barely contained anger and cockney rhyming slang. Fonda comes across as a wannabe playing at being a gangster, he’s not comfortable with all the dangers his life brings surrounding himself with slightly more capable bodyguards. There’s nothing tentative about Stamp’s enquiries and there are a number of great scenes in which he proves he still has what it takes.

The highlight is a scene in which Stamp turns up to a party at Fonda’s home, a bodyguard approaches him on the balcony outside and very quickly gets thrown over it to his death, this all happens in a slightly out of focus long shot as background action to a close up of Fonda in safety.

The rest of the cinematography is equally impressive, there’s great editing and the way that the time frames are played around with bring a sense of disorientation, representative of Stamp’s tenuous link with normal life. There’s great use of flashback, particularly the use of footage from the movie ‘Poor Cow’ (1967) by Ken Loach. It’s a gut punch of a movie delivered with all the quality you can expect from Steven Soderbergh. 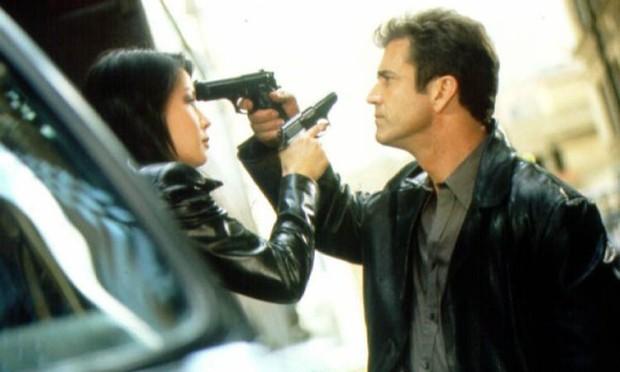 Both versions of ‘Payback’ are worth watching and different enough to justify seeking them out. The later ‘Director’s Cut’ feels more like the film ‘Payback’ should be. It’s significantly different, dropping primary characters and narrative arcs and changing the ending of the movie to one more befitting its 70s influences. Mel Gibson is at his arguable best as ‘Porter’, a thief who is betrayed and left for dead by his wife and partner following their robbery of a Chinese gang.

After his recovery ‘Porter’ returns to town to take back his share of the money, $70,000, a trivial figure subject to much confusion and derision throughout the movie. ‘Porter’ works his way through the hierarchy of the shady organisation known as ‘The Syndicate’ after killing his partner who paid the whole lot over to clear his way back into the group.

It’s a simple story and follows the revenge formula without much deviation. ‘Porter’ is a likable tough guy who exudes an intimidating persona. There are a number of interesting subplots, including some corrupt cops who want to help ‘Porter’ get his money back and then take it off him anyway. 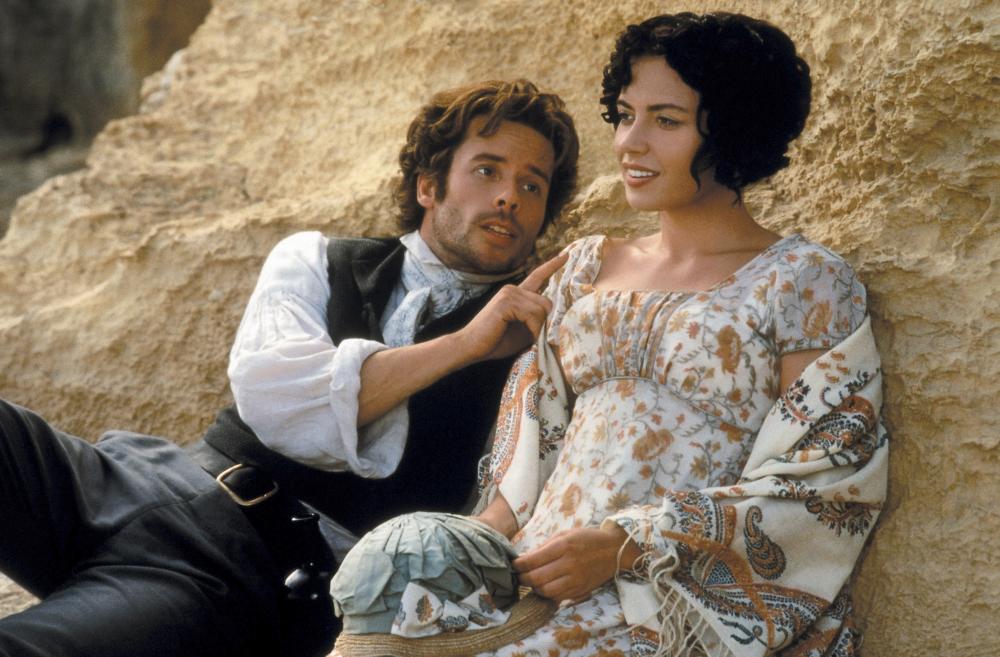 ‘The Count of Monte Cristo’ is a fantastic adventure story and this is the best of the film adaptations out there. It also shows how timeless a theme revenge is, adapted from the classic Alexandre Dumas novel written in 1884. The film stars Jim Caviezel as ‘Edmond Dantes’; a naïve sailor who is framed by his best friend, ‘Fernand Mondego’ (Guy Pearce), for a crime that sends him to an island prison.

After languishing for a number of years and being mistreated at the hands of the evil prison warden (played by the ever evil Michael Wincott) a fellow prisoner, ‘Faria’ (Richard Harris) emerges from the floor in his cell expecting to have tunnelled his way to the outside, he enlists the help of ‘Dantes’ and in return he teaches him swordplay, philosophy and various other tools which can be put to good use. He re-enters society following his escape as the eponymous ‘Count’ and puts plans in motion to take revenge.

It’s a superbly paced adventure movie with everything you could want from a classic story, including stone cold revenge. Performances are excellent throughout, Caviezel is good and plays the role tongue-in-cheek as he should. Luis Guzman puts in a great turn and brings some comedy to the proceedings, but, they are all outdone by the excellent performance of Guy Pearce as the stroppy and entitled ‘Mondego’. Great Sunday afternoon fun to get your revenge fix in an otherwise pretty dark genre. 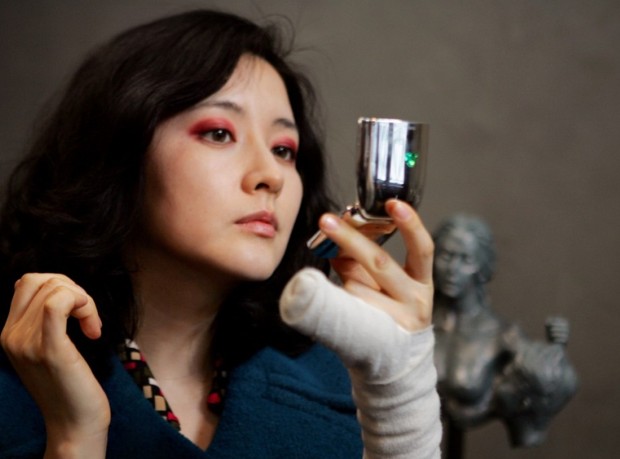 Park Chan-Wook’s trilogy of movies are unconnected by narrative but share the theme of a singular need and desperate quest for revenge. The first movie in the series, ‘Sympathy For Mr Vengeance’ (2002) follows ‘Ryu’, a deaf-mute, laid off from his job but needing money for his sister’s kidney transplant. A black market deal goes bad and he kidnaps his former bosses daughter for ransom.

When the plan ends badly, it leads to an exchange of vengeful acts, which propel the film to a very bleak ending. It’s a slow burner and technically it feels pretty raw throughout, you are asked to sympathise with characters that prove difficult to like but it’s still a compelling watch.

‘Oldboy’ (2003) is perhaps the most popular and accessible of the three, telling the story of ‘Oh Dae-su’ and his inexplicable imprisonment for 15 years, one day he awakes on a rooftop and is called by his captor who refuses to explain his motives or identity. ‘Oh Dae-su’ then goes on a quest for vengeance and discovery.

Again, it’s a bleak and punishing movie, looking into the dark corners of human nature. Choi Min-sik is astounding as ‘Oh Dae-su’ and some of the action set-pieces are breathtakingly shot and edited.

The trilogy ends with ‘Lady Vengeance’ (2005); again a tale of imprisonment, this time the protagonist ‘Geum-ja Lee’ is locked away for 13 years for the kidnap and murder of a young boy, a crime she did not commit but did confess to. Released as a model prisoner, she goes on the hunt for revenge against the true perpetrator.

This is a highly polished entry in the trilogy, restrained in relation to its predecessors but nonetheless an extreme film by any standard. It’s a commendable trilogy of movies and thrust Korean cinema into the spotlight, particularly in the case of ‘Oldboy’, which was awarded the Grand Jury Prize at Cannes.

‘Dead Man’s Shoes’ may well be Shane Meadows hardest hitting movie, this is quite a feat considering he takes bleak and gritty storytelling to a new level. We are introduced to ‘Richard’, an ex-army veteran who arrives in the West Midland town setting with his clearly vulnerable younger brother ‘Anthony’.

We discover through flashbacks that ‘Anthony’ has been subjected to bullying and humiliation by the resident small town gang of drug dealers led by big fish in a small pond, ‘Sonny’. ‘Richard’ has arrived in town to mete out his own brand of justice to the gang. It’s a simple story but the way in which ‘Richard’ carries out his vengeance pushes the narrative along throughout. He starts by introducing himself to the gang in increasingly threatening ways and attacks them psychologically before escalating to physical violence.

‘Richard’ is played by Paddy Considine (also on co-writing duties) and he puts in an absolute powerhouse of a performance. He is totally believable as a man constantly on the edge of violence, a number of scenes in which he interacts with the gang are among the most intense and intimidating the genre has to offer.

It’s a bleak and deeply affecting film, its only balance coming from some pitch-black comedic moments. There’s a great supporting cast and the setting gives the film a sense of realism, particularly for native British audiences. Considine is the glue which holds it all together though and if the Academy considered films like this then you would surely be watching an Oscar winner.

Possibly the most stylish looking revenge movie in this list but with the narrative and acting to match. ‘A Bittersweet Life’ gives us a story of multi-layered revenge with our leading character evolving emotionally throughout the film.

Starring Byung-hun Lee (also the lead in ‘I Saw The Devil’) as ‘Kim Sunwoo’, a young gangster/enforcer who has the trust and confidence of his boss ‘Mr Kang’. ‘Kang’ assigns him to watching his young girlfriend whilst he goes out of town but he also has suspicions she is having an affair and asks him to execute her and her lover if proved correct.

‘Sunwoo’ meets the young girl and spends some time with her before discovering she is indeed having an affair and that she is in love with the other man. ‘Sunwoo’ goes to her home to kill them but decides on mercy and lets them both live.

It’s an ambiguous decision but in the context of what we discover about the character throughout the film, it may be down to his empathy for someone who has at least something real in their life, it’s evident that despite his cool and successful exterior that ‘Sunwoo’s’ life is empty in the extreme.

‘Kang’ finds out about the betrayal and ‘Sunwoo’ becomes a target for his revenge, as well as other’s in the criminal fraternity who hold a vendetta against him. This leads to ‘Sunwoo’s’ kidnapping, torture and live burial before he escapes to enact his own vengeance.

It’s an ultraviolent movie with a frenetic pace, it’s filmed superbly well and has an unlikely thread of comedy throughout the script. It shows influences from Tarantino and Leone but perhaps owes more to the hard boiled noirs of the 50s. As the title suggest, the ending leaves a bittersweet feeling as we get the impression the characters no longer really understand why they want revenge so badly.

Fitting that this should be the last movie on the list, it doesn’t mess with the classic genre formula but it takes every aspect of it and pushes it to the absolute extreme. It is perhaps the most testing movie in terms of graphic violence in this genre since Irreversible.

It is another great example of Korean cinema and what the country can do with the revenge thriller. It stars Byung-hun Lee as ‘Kim Soo-Hyeon’ (also of ‘A Bittersweet Life’) and Min-sik Choi as ‘Kyung-chul’ (the leading man from ‘Oldboy’). ‘Soo-Hyeon’ is a government agent whose girlfriend is brutally murdered by ‘Kyung-chul’; a sadistic killer who kills with wild abandonment across the South Korean countryside.

When ‘Soo-Hyeon’ is confronted with this tragedy, he decides to hunt down the killer and take vengeance on him. The big difference here is that he drags out this revenge for as long as possible and proceeds to beat ‘Kyung-chul’ to a bloody mess several times, each time letting him go free to recover before hunting him down again to continue the torture.

This cat and mouse cycle may turn some viewers off from ‘Soo-Hyeon’ and you certainly get the feeling he’s unhinged in his own way. Interestingly the bulk of the attention is paid to ‘Kyung-chul’ who despite being an abhorrent monster is eminently watchable due to the charismatic turn from Min-sik Choi.

Pulling it all together is the masterful, unflinching direction from Kim Jee-woon, he makes you enter this disturbing world through wonderful cinematography and a painful attention to the detail of some of the darkest acts in cinema.