In every cranny, every crevice, every corner of the Earth, there is darkness. There are shadows too in that Great Southern Land of ragged mountain ranges and of droughts and flooding rains.

In contrast to the Victorian and Southern Gothic – which conventionally focused on the evil associated with cramped, urban spaces or ghostly, old mansions – the Australian Gothic focused on the harshness and the beauty of the natural landscape.

Psychical and economic isolation, arduous life in an alien land, grisly convict tales, frontier violence, misunderstood Aboriginal beliefs, the religious zeal of the settlers, and the struggle to unify, govern and Europeanise the continent gave rise to the so-called “Outback Gothic”.

While early, pre-war films exhibited some gothic conventions, including ‘The Story of the Kelly Gang’ (the first feature length film ever made), the gothic genre in Aussie film didn’t truly take shape until the emergence of the Australian New Wave in the early-1970s.

The ravaging of two global wars, a new postcolonial perspective, growth in urban areas and a boost from the Gorton and Whitlam Governments helped create a new generation of Outback Gothic films which recognised a darker side to the nation’s scorched heart.

These cautionary films chose to personify the bush as a supernatural entity, emphasise the frailty of imperial society, indict the rural lifestyle and see the outback as a tremulous binary where culture, nature and gender were forever clashing.

These films offer up the opportunity to hear those ghosts by billabong. We can reach out and touch those murky depths hidden beneath a nation’s sunlit dream. 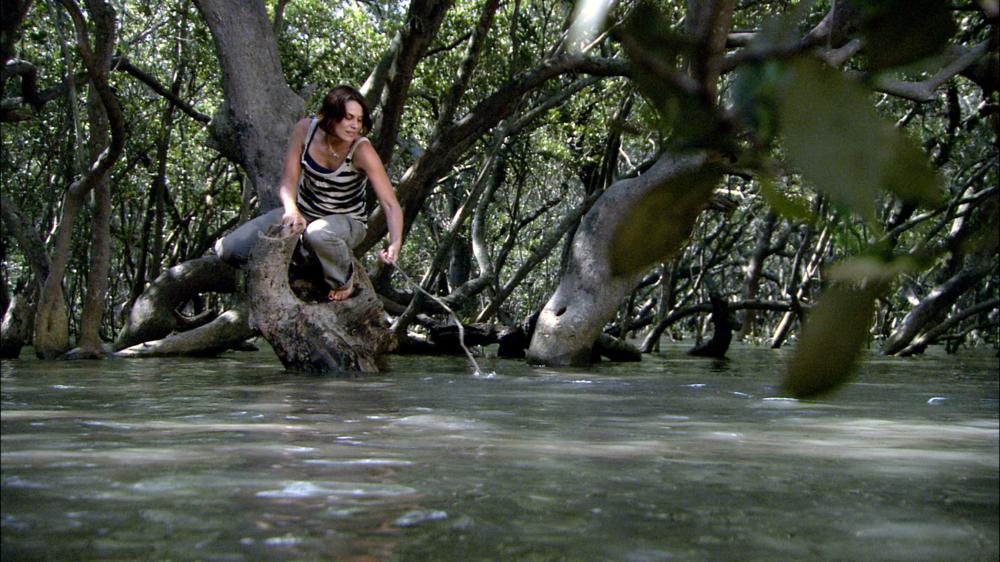 Australia is well-renowned for its dangerous animals. Uninterested by the adventure-loving flicks of the New Wave, ‘Black Water’ paints the wilderness as a dark labyrinth: hostile, unsympathetic and unconquerable.

The plot follows three friends whose fishing trip into the Northern Territory’s mangrove seas takes a terrible turn when a massive crocodile upturns their boat.

Throughout the 1970s and 80s the crocodile was a strange symbol of Western, masculine superiority in Australian cinema. In ‘Crocodile Dundee’, the dinosaur-like beast, then hunted to near extinction in parts of the Northern Territory, became a metaphor for white man conquering the primal world.

Later when culling was restricted, ozploitation flicks like the Tarantino-approved ‘Dark Age’ tried to understand the crocodile by giving it human features, presenting it as a sympathetic creature turned rouge by man.

Like the equally-masterful ‘Rouge’, ‘Black Water’ doesn’t try to undermine or understand the reptile. Whilst its connection to true events is dubious, its realism, especially in the acting, practical effects and ending, proves far more believable and ultimately terrifying.

Humanity returns to its primordial state, literally clinging to branches like a monkey to escape its predator.

As the title would suggest, the most unnerving thing about ‘Black Water’ is its murkiness: the troubling questions one is forced to ask when entering a harsh place impervious to all human thought and weakness.

Joel Anderson’s mockumentary is a masterwork of low-budget filmmaking. Realising the dark, gothic spaces hidden in the urban wasteland and in the eerie, lonely desert, ‘Lake Mungo’ is one of the most bone-rattling horror movies Australia has ever produced.

Filmed like a documentary, it charts the death of Alice Palmer (Talia Zucker) and the strange events which plague her family in the wake of the tragedy.

‘Lake Mungo’ is a slow movie that demands your patience, however it rewards you with some genuinely heart-stopping moments, none more so than the final footage buried in the eponymous lake.

The footage is dark, silent and grainy, and our eyes are forced to nervously search the frames looking for a ghostly, black figure reflected in the mirror or standing within the trees.

The camera zooms onto a figure until its ultra-pixelated and we’re made to try and make a face from the blurry image. Our imagination conjures up something more terrifying than anything that could ever be shown distinctly on-frame.

‘Lake Mungo’ is a strange breed of horror movie. It’s a slow-burning ghost story that reminds us that the outback – the brightest and sunniest of places – casts the darkest shadows.

Few Australian films have made such a mark on the worldwide cinematic landscape as Greg McLean’s grindhouse slasher. Cruel and unapologetic, the movie upturned the popular notion that the outback was a place of fun and adventure, and exposed the vulgar misogyny and racism at the nation’s heart.

After breaking down at the Wolfe Creek crater, a group of backpackers are befriended then kidnapped by the serial killer Mick Taylor (John Jarratt).
‘Wolf Creek’, for better and for worse, is a Juvenalian satire of Australian cinema in the 1970s and 80s.

The helpful masculine figure popularised by ‘Crocodile Dundee’ is traded for a viscous psychopath who tortures women and the fantastical adventure plot is swapped for a realist tale of murder and barbarity.

‘Wolf Creek’ concludes that the inhabitants of the outback are as equally hostile and unforgiving as the outback itself. In utter spite for British Judeo-Christian ideals, the last survivor is literally crucified. There’s no hope, no forgiveness.

Proclaimed by ozploitation aficionado Quentin Tarantino as the best horror film made since ‘The Texas Chain Saw Massacre’, ‘Wolf Creek’ (and to a lesser extent its sequel) is a must-see Outback Gothic film. Whatever your opinion, you’re unlikely to forget it anytime soon.

The title alone makes it worth watching. One of the absolute highpoints of Australia’s weird ozploitation boom, Peter Weir’s feature-length debut is both a satire on Australia’s violent fascination with cars and a bizarre cautionary tale for the small turn in the big bush.

A rural town in New South Wales profits from salvaging the high number of cars which mysteriously crash there on the ingoing road.

The movie is ripe with conflict between the nation’s conservative past which would prefer to stay in the bush, and the new liberal generation which believes in urban self-expression. Weir packs the quiet, restrained resentment of the elderly local government against the weird and wonderful cars redesigned by the local “hoons”.

The weird folk atmosphere of ‘The Cars That Ate Paris’ makes it a strange – admittedly weaker – cousin to Anthony Schaeffer’s ‘The Wicker Man’. With all said, it remains an excellent slice of Outback Gothic and a curious appetiser served by the man who would later give us such Aussie classics as ‘Picnic at Hanging Rock’, ‘The Last Wave’ and ‘Gallipoli’.

The grisly true story of Alexander Pearce gave rise to the so-called “Tasmanian Gothic”. Jonathan auf der Heide’s version of the tale is a creepy thriller, a thought-provoking tragedy and a suitable homage to the distinct regional voice which came to define Tasmanian fiction in the 19th century.

An escape by eight convicts from the isolated Macquarie Harbour Penitentiary in 1822 goes horridly wrong when the group become lost and hungry in the wilderness.

As far as the facts are concerned, Alexander Pearce was the only one to survive the escape by apparently cannibalising the rest of his company. This bleak tale of human nature combined with the misunderstood beliefs and traditions of the all-but-annihilated Aboriginal populations to create a new breed of gothic fiction.

‘Van Diemen’s Land’ recalls that Tasmanian tradition which presented the landscape as a beautiful, enigmatic and brutal entity. The massive mountain backdrops, cool temperate rainforests, lonely rivers and seas of long grass, painted in bleak greys and greens, are strange and unforgiving places.

The eerie landscape of ‘Van Diemen’s Land’ amplifies the tragic loneliness and unforgivable evil of the convicts sent there to die. It’s a violent and dreary tale, but ultimately stands as a welcome modern take on the long-forgotten Tasmanian Gothic.

Sean Byrne’s teen horror is one of the most twisted Australian films ever made. Violent, odd and blackly comical, ‘The Loved Ones’ takes a power-drill to the gothic genre and produces something wholly new and deformed.

After a boy (Xavier Samuel) rejects an offer to the school dance, a classmate (Robin McLeavy) kidnaps him and forces him to partake in her own private prom.

The landscape and art design of the film helps lift it from unintelligent schlock. A disco ball sends sparks dancing around a torture room, dust hangs like a fog, and the use of pink – a colour generally associated with romance and girlish innocence – is used for terrifying effect.

‘The Loved Ones’ resembles a kind of backwoods fable mocking rural life. It’s the Australian equivalent to ‘The Texas Chain Saw Massacre’, where those lost in economic progression have become inbred monsters pushed towards murder, and where tools of the working man like hammers and drills become nightmarish weapons.

Like in Tobe Hooper’s Southern Gothic, the country home which delivers on a nation’s dream for a simpler life hides the darker, depraved side of humanity. ‘The Loved Ones’ is a movie every true horror fan needs to see.