Defined as “a persistent disturbing preoccupation with unreasonable idea or feeling”, obsessions can definitely drive us to a certain point where we literally can’t think of anything else. Why do we become obsessed? When does a fixation become an obsession?

Obsessive behavior can be interpreted as an invasive feeling in ourselves that we can’t control. From brilliant people to serial killers, we are not immune to it because it is in our very nature to get hooked on someone or something. Perhaps “The trick, Mr. Potter, is not minding it hurts” but, who knows?

Obsessions are one of the oldest desires we as humans experience, and even during our childhood years, we did indeed experience a fixation on some level. It’s not a matter of embarrassment, but of careful examination. Our obsessions reveal more than what we think, and thus they are doorways to our most strong inner desires.

On this list, we’ll see characters that can be catalogued as individuals with obsessive behavior, according to the provided definition and their actions in the movies in which they appear. We will try to include movies that show obsession in peculiar ways, and possibly some films where obsessions and compulsions are overlooked.

We’ve decided to leave out most big name productions or obvious selections (such as “Sunset Boulevard”, “Single White Female”, “The Stepfather”, “Fear”, “Requiem for a Dream” and “Pi”), in order to bring you some fresh and rarely mentioned films. So, with that said… 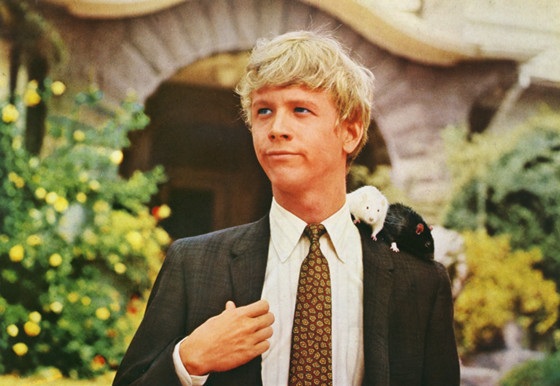 Starting our list we have a peculiar gentleman, whose social inadequacy and loneliness makes him –for lack of a better word– unique among his “friends”. Willard Stiles’ affinity for rodents, especially rats, puts him on the 20th place on our list.

In “Willard”, we meet the young Willard Stiles, a timid and introverted man who lives with his mother, Henrietta, in an old and crumbling Victorian mansion. Without friends, lovers or any companions, Willard becomes friends with the numerous of rats that live with him. His obsession is then justified by his loneliness, making the rats a physical manifestation of his thoughts; a tumultuous crowd of unorganized and unwanted animals.

If you have a fear of rodents, especially rats, then this film can be your worst nightmare, because this obsession is definitely as weird as it is disgusting. As the tagline for “Willard” reads, “this is the one movie you should not see alone.”

In 19th place, we have an obsession driven by an old desire, one as old as civilization itself, the idea of immortality and transcendence of love. “The Fountain” tells the story of a dying lover, a persistent man, and time itself. As Queen Isabella is dying, Tomás El Conquistador embarks on the noble mission of finding the Tree of Life in America.

Centuries later, Doctor Tom is crafting and working on a cure for his wife, Izzy, who has a deadly brain tumor. In deep space, the Space Traveler Tommy inhabits a bubble, meditating in what appears to be some sort of womb-like snow globe habitat, searching for the meaning of life and the consequences of immortality itself.

This movie, which is orchestrated and composed in three storylines, is a solid example of what we are willing to do in order to save the objects of our obsessions. Here, love is what fuels the protagonist’s compulsion in finding a way, albeit impossible, to save his love from death.

“Who we are, why we are, and where we come from” is another old enquiry we humans have. Doctor Elizabeth Shaw and her partner, Charlie Holloway, seemed to have at least a clue of where to find this answer.

During an archaeological expedition on Earth in the year 2089, the couple found a “star map” painted in a cave. In this grand sci-fi prequel to the “Alien” movies, we begin to understand what really happened to the crew of Prometheus on their journey to LV-223, and as to the “who/why/where” question, we do have an answer, but perhaps it’s not the one we expected.

“Prometheus” tells the story of a lifelong obsession of these characters in understanding our origins as species and civilization, and at the same time showing the true intentions of the Weyland Corporation with this undisclosed mission.

Broadly underrated and harshly forgotten, in 17th place we have “The Cell”. In this film, the main characters are Dr. Catherine Deane, a brilliant psychologist, and Carl Rudolph Stargher, a serial killer. Catherine’s is obsessed with helping, through a novel neuro-hypno-REM-type therapy, a child who has been in a coma for quite some time.

Carl’s obsession is with human dolls and suspension. When the serial killer falls into a coma, the FBI searches for a way to access Carl’s mind, to be able to save his latest victim who’s drowning in a custom-made cell. Dr. Deane then uses her virtual reality/dream technique to enter Stargher’s mind.

The plot of the movie moves fast enough to leave us breathless, as we see what drives him to murder the way he does – by terrorizing, taping, drowning and finally bleaching his victims as white-porcelain human dolls. It is through Catherine’s savior complex that she can unlock the secrets of Stargher’s obsession. The visual effects and the scenes inside Stargher’s mind made this movie worthy of this mention. 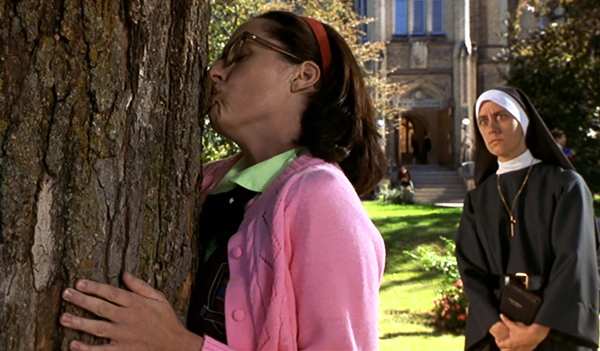 While it’s not classic obsessive behavior, Mary Katherine Gallagher’s dream and overall aspiration is to be a superstar; you know, the pink-cake deserving, kissable princess, nice-moves dancer kind of superstar. Lacking virtually any potential, looks or talents to achieve this goal, Mary Katherine has been obsessing over this since she was a child, but she especially wants to be kissed in a certain way – how movie stars are kissed.

Living with her grandmother who wants her to be a businesswoman, Mary Katherine constantly is fantasizing and having vivid daydreams about how her life can be if she’ll only be kissed by Sky Corrigan, the school’s Jock King.

In 15th place, we have “The Rules of Attraction”. A movie that begins with rewinding scenes and has split-screen takes throughout its run time must be interesting, right? This spiderweb-ish film narrates the stories of different characters, and from different points of views. What unifies the characters (Lauren, Sean, the “Food Service Girl”, Paul, Lara and Victor) are their obsessions.

For Paul, it is Sean; for Sean, it is Lauren; for Lauren, it is Victor; and so on. This movie has a great surprise factor, impressive visuals, and an awesome soundtrack. This is one of those flicks one must see at least once.