A relatively common trope in horror films and psychological thrillers, the concept of human experiments is truly horrific due to the realities of their existence. From World War II Nazi experiments to the birth of psychology field testing, the implantation of testing humans has resulted in a lot of suffering, but also a lot of knowledge about human behavior.

From 1930’s Frankenstein to 1960’s French science fiction to today’s exploitation of horror films as seen in the “Saw” and “Human Centipede” franchises, the theme has had a long tradition. 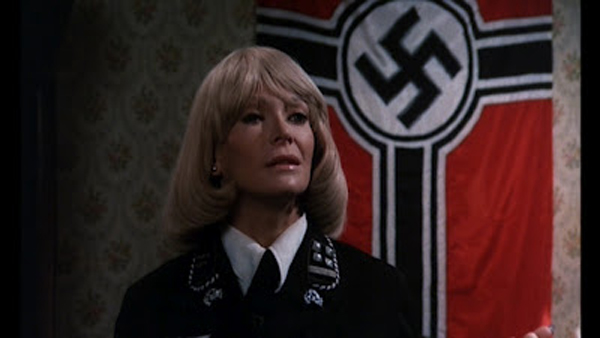 Don Edmonds’ endeavour into the nazisploitation genre follows Ilsa (Dyanne Thorne), a Kommandant of a Nazi prison camp. She conducts sadistic scientific experiments to fellow women in order to prove to the higher ranked officers that women are more capable of enduring pain than men are, and therefore should be allowed to fight in the German armed forces, since the Nazi military are in dire need of reinforcements.

Besides torturing women, every night she chooses male prisoners and rapes them and after she finishes with them, she castrates and kills them.

Even though the film is not for the light-hearted and extremely exploitative (hence nazisploitation), the sex-addicted sadist Ilsa is patterned after real-life murderous female Nazi camp personnel Ilse Koch and Irma Grese.

Before the film begins, there is a notice saying: “The film you are about to see is based on documented fact. The atrocities shown were conducted as ‘medical experiments’ in special concentration camps throughout Hitler’s Third Reich.

Although these crimes against humanity are historically accurate, the characters depicted are composites of notorious Nazi personalities; and the events portrayed, have been condensed into one locality for dramatic purposes. Because of its shocking subject matter, this film is restricted to adult audiences only. We dedicate this film with the hope that these heinous crimes will never happen again.”

The film was followed by three sexploitation sequels, Ilsa, Harem Keeper of the Oil Sheiks (1976), Ilsa, the Wicked Warden (1977) and Ilsa, the Tigress of Siberia (1977).

Stuart Gordon’s science fiction horror comedy loosely based on the H. P. Lovecraft episodic novella “Herbert West–Reanimator” follows Herbert West (Jeffrey Combs), a medical student, as he successfully brings his dead professor back to life, but finds that there are horrible side-effects which end up re-killing Gruber.

West moves away to continue his experiments with the help of fellow medical student, Dan Cain (Bruce Abbott), as they try convince the University’s Dean, Dr. Alan Halsey (Robert Sampson), about the possibilities of reanimation of the dead.

Originally, Gordon was going to adapt Lovecraft’s story for the stage, and then planned to make a half-hour television pilot, and then reformatted the pilot and the twelve episodes which were planned to follow to be maximized to an hour.

Eventually they decided on making a standard film since the majority of the horror fan bases were found to watch films more than television. Gordon and his writers, Dennis Paoli and William Norris, also intended it to be a period piece at the beginning of the 20th Century, but found it to be too over-budget and hence landed on adapting it to modern-day Chicago.

The fast pace, deadpan humour and bloody special-effects led to the integration of B-grade thrillers, surrealist art and 80s comedy and to an overall cult classic. 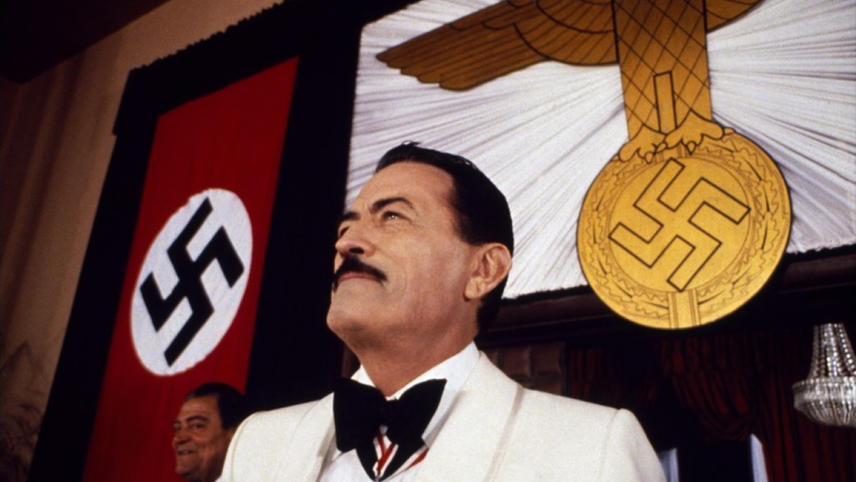 Franklin J. Schaffner’s British-American science fiction thriller based on the novel of the same name by Ira Levin follows young Barry Kohler (Steve Guttenberg) and retired Nazi hunter Ezra Lieberman (Laurence Olivier) as they track down a secret organization of Third Reich war criminals, including the infamous Dr. Josef Mengele (Gregory Peck), the infamous Auschwitz doctor, who are, themselves, tracking down 94 seemingly random men in different countries, including Austria, Germany, Denmark, Great Britain, the United States, and kill them.

Lieberman follows Kohler’s leads and begins travelling to investigate the suspicious deaths of these men. He meets their widows and is astonished to find an eerie resemblance in their adopted, black-haired, blue-eyed sons, who all have similar mannerisms despite being from different places and speaking various languages.

Lieberman also discovers strange similarities with regards to the assassinated men’s cold attitudes towards the boy, the mother’s affectionate bond, and the ages of the parents during the time of adoption. The reason behind the uncanny resemblance is astoundingly chilling as Schaffner utilises iconic actors to tell an original tale that reimagines history and questions the “what if” attitudes of World War II. 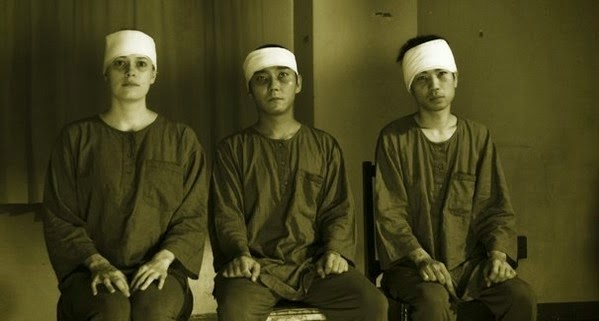 Hiroshi Takahashi’s Japanese horror follows two sisters, Miyuki and Kaori, who are daughters of two neurosurgeons, Etsuko Ōta and Yukio. They all see a documentary of a secret experiment where the Japanese, Manchu, and Russian subjects’ temporal lobes are electrified until the subjects are strangely able to project a blinding white light.

Years later, Etsuko plans on conducting a similar experiment and recruits her daughter, Miyuki, as well as others to commit mass suicide assisted by Etsuko’s assistant, Hattori, as part of their initiation into the experiment. Miyuki wakes up inside a facility and is told that she has died and is currently astral projecting.

After having lost contact with her sister for six months, Kaori tracks down her last movements as she sees and talks to her in her dreams. Soon, her mother takes Kaori to the facility to learn about the experiment.

Etsuko reveals that she and Kaori have always wanted to become enlightened by the true reality beyond the current one in order to achieve a spiritual evolution. Takahashi, known as a screenwriter of “Ring”, once again utilises the source of thought through video since the documentary they initially saw sparked off their quest for enlightenment through experimentation.

Stuart Hazeldine’s psychological thriller, set in a parallel version of present-time United Kingdom, follow eight candidates as they sit for an employment assessment exam for the company, DATAPREV.

The Invigilator explains that the exam is 80 minutes and consists of only one question, but there are three rules that if broken, lead to disqualification. They must not talk to him or the armed guard at the door, they must not “spoil” their paper, and they must not leave the room. Each desk contains a question paper with the word “candidate”, followed by a number, from one to eight.

Set in real time, the exam begins and it is revealed that the papers are blank. One candidate is immediately disqualified, leaving the remaining seven – nicknamed Black, White, Brown, Dark, Blonde, Brunette, and Deaf – referring to their skin and hair colours, to realize that they can talk to each other and work together.

“White”, who is arrogant and rude, takes control of the group as they try to figure out how to reveal any hidden questions on the paper. The group manipulates tricks and uses each other in hopes of their disqualification. The scenario soon becomes dangerous, but they cannot talk to the armed guard or the invigilator for help.

Nominated for a BAFTA for Outstanding Debut, Hazeldine’s film makes incredible use of a single location, a few actors, and a tense countdown clock to the end of the exam, and subsequently, the end of the film. With multiple twists and turns, one wonders what job could be so important for such a chillingly claustrophobic interview, and Hazeldine does not disappoint.

David Cronenberg’s psychological thriller based on the lives of Stewart and Cyril Marcus and on Bari Wood and Jack Geasland’s novel “Twins”, follow Elliot and Beverly Mantle (both played by Jeremy Irons) who are identical twins and gynecologists who specialise in female fertility treatment.

The more confident and cynical of the two, Elliot, seduces women patients and when he eventually gets bored of them, passes them off to the shy and passive Beverly, without the women even realising that they have switched.

However, soon Beverly gets a girl by himself, Claire Niveau (Genevieve Bujold), who realises the difference between the two brothers.

The two become close, but she soon leaves town for work, sending Beverly into a depressive episode and leading him to abuse prescription drugs, become slave to paranoid delusions and see “mutant women” with abnormal genitalia. He must “fix” these women and commissions metallurgical artist Anders Wolleck to create a set of strange gynecological instruments specifically for operating on these fictional, mutant women.

Cronenberg, who is a master of body horror, is no stranger to graphic imagery and psychological dishevelling. Another film of his which could fall under this list is “The Fly” (1986), which follows Seth Brundle (Jeff Goldblum), an eccentric scientist who has just successfully managed to create a teleportation device, and is anxious to use it himself.