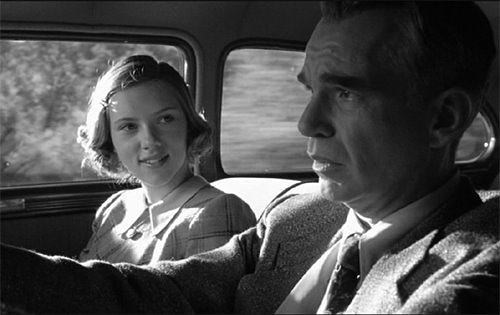 The second appearance of the Coen brothers on this list, “The Man Who Wasn’t There” is perhaps the best piece of neo-noir filmmaking of the 21st century.

It feels strange to us that the Coen brothers were the auteurs that created this film, by virtue of their almost strict adherence to making quirky, idiosyncratic films. Nonetheless, it is clear that “The Man Who Wasn’t There” is a kind of homage to the greatness of the noir period in the ‘40s.

Owing to the genre in which this film undoubtedly fits, “The Man Who Wasn’t There” is steeped in a lonesome sensibility. It speaks heavily to the problems surreptitiously embedded in the ideal of the “American Dream.” In demystifying, and to some extent, debunking the idealism of America, the film takes on a much darker and disheartening tone.

Ed Crane (Billy Bob Thornton) attempts to expand his barber business through questionable means: blackmail. Nonetheless, his plan fails, and he is falsely accused of murder. His unjust end shows a different, more harsh nature of reality; namely that the world is not black and white.

Spike Lee’s “25th Hour” is a powerful meditation on the inevitability of loss. On the face of it, the film follows Monty (Edward Norton) as he tries to make the most of his last days of freedom. The state has discovered that he is a drug dealer.

The film also plays against the background of 9/11. This was done quite expertly by Lee, to weigh down the film in the reality of most New York citizens after that tragic day. This choice helps to establish the film’s tone as dispiriting, as Monty’s imminent imprisonment is an obvious source of sadness for him and his own friends.

As Lee presents Monty as a normal, relatable figure, we as an audience also feel a degree of sadness for his future. Consequently, what transpires in the film, particularly near the end wherein Monty breaks down in front of his friends, is embellished with tangible internal agony.

However, a sense of regeneration emerges late in the film, both in the respect of New York after 9/11, and also in Monty eventually regaining his freedom and making the most of his existence.

This Turkish film runs for more than three hours, but can nonetheless be described as a taut examination of a man, Aydin (Haluk Bilginer), a former actor who runs a hotel in a secluded part in Turkey. The film utilizes the landscape presented in a way that evokes the quelled spirit of a man who is a shadow of a more vital version of himself.

The film mainly runs through piles upon piles of dialogue, and to an unwitting viewer, this amount of dialogue seems boring and unnecessary. However, it communicates something essential about “Winter Sleep”: that Aydin’s psychological and situational position has led him to an untenably disconcerting air of egotism and male loneliness.

Thus, the unremitting dialogue shows how Aydin is so concerned with his own views and opinions and on imposing them on his sister and much younger wife.

The film does not let us take an easy way out in confronting the flawed humanity of Aydin, as the camera often focuses on him for long periods of time. We are therefore forced to see this man in the habitat and psychological state that has facilitated his current dispositions.

The film is a prevailing exploration of male dislocation and the problems that arise from attempting to construct an identity into which oneself does not fit.

Guillermo del Toro’s “Pan’s Labyrinth” is his most inventive and substantive work to date. As usual, all the visual bravado is present, but what is different about this film is the way that its characters, ideas, and themes resonate with us after seeing the film.

Firmly anchored in a fantastical World War II context, “Pan’s Labyrinth” makes a uniquely pertinent connection between the feeling of unreality most of us have about the horrors of the Nazi reign. It seems that, due to the very stark and hopeless reality of what the Nazis did, we only feel even more shocked about what occurred, insofar as it is in some way unreal that men could have acted in the way that they did.

Moreover, Ofelia (Ivana Baquero) retreats into the unreality that the film depicts as a means to escape the horror of the world where she existed. Even as a child, it is clear that Ofelia grasped the truly abominable nature of what the Nazis were doing, and that only makes it more patent to us that their conduct should have been stopped before millions of lives were lost.

Del Toro always ensures that the tone of the film never enters into the region of anger by modulating it to remain as deeply saddening. Although the events that take place in the third act are horrific, and we would be more than justified in being angry about them, del Toro makes the film more effective by predisposing us to be emotionally present and sensible to the horrors that the film confronts.

Sofia Coppola really stepped out from her father’s shadow with this fantastically human film about the quiet wounds that loneliness inflicts.

It follows Charlotte (Scarlett Johansson) and Bob (Bill Murray), both out of their comfort zones in foreign Tokyo. They marvel at the aesthetic pleasures that Tokyo offers, but feel within themselves that it is not a place in which they belong.

We see this through Charlotte’s longing and pensive glances through the window at her hotel, whilst Bob deals with this dislocation through containing himself and drinking alcohol.

As a result, the pacing is slow, and the film firmly focuses on the feelings between the characters. Once the two characters eventually meet and form a friendship, that friendship gives them both a place and sense of purpose amid the bright lights in Tokyo.

In this film, Wong Kar Wai gives us a different, more humbling perspective on the nature of adultery. Usually, films try to dramatize and hyperbolize cheating, and this usually involves excusing he cheating partner for their actions. “In the Mood for Love” takes on a different approach, focusing on the collective adversity that cheating has on two individuals.

We see Chow’s (Tony Leung) and Su’s (Maggie Cheung) resolute resignation to the fact of the unfaithfulness of their respective spouses. As a result, these two characters form a bond through their unenviable experiences, which is a source of comfort for both. But, their bond does not detract from the foundations on which it was established: the cheating of their spouses.

Wong’s film is enhanced through its situation in a context of strict Korean social policy, adding a further layer of inhibition to the lives of Su and Chow.

“The Master” is widely believed to be inspired by the Church of Scientology, as it depicts a cult-like organization, with a man resembling L. Ron Hubbard at its pinnacle. Director Paul Thomas Anderson immediately confronts us with the troubled Freddie Quell (Joaquin Phoenix), who is clearly out of touch with societal conventions. Essentially, he is lost to the wider world and to himself.

Dodd and Quell become close in the cult that Dodd has cultivated, and Anderson captures every scene with an emptiness and meaninglessness that forces us to doubt the beneficence of the relationship, and the good of Dodd’s organization.

The Dardenne’s cinematic delivery certainly saw a peak in this great 2014 film. It tracks the modest journey of Sandra (Marion Cotillard) as she travels to the doors of work colleagues to try to keep her job. In the Neorealist tradition, the film deals with the economic realities of France, highlighting the very human consequences of somebody losing their job.

Sandra is filled with dread and panic after losing her job. It definitely takes a hard psychological toll on her, which is only amplified by the pressures of asking her work colleagues to forgo a bonus in order to keep her at work.

Cotillard is very humanly fragile in these moments, not demanding that they help her, but rather presenting her calculable view on the matter. What the film shows, without any pretension, is the pressures of work and tells us something essential about human nature.

“Leviathan” perhaps is the best instance of a modern film capturing the aspirations and collective mood of Vladimir Putin’s Russia; a place with grey skies, vodka, and embedded and buried anger.

Much of the film is about the mood that it emanates, and this is achieved through the hard-examining shots that linger on artifices of Russian significance, despair on the faces of the characters, and the admittedly slow pace of the film.

The most communicative scene in the film is when the Nikolai (Aleksei Serebryakov) and his family trek out to the mountains and shoot pictures of Lenin and Putin, as this outlines the resentment of ordinary Russians towards political ideologues who put their ideals and interests above the people.

Similarly, fraught is the relationships depicted in “Leviathan”, as there are a number of arguments and infidelities that take place during the film. Ultimately, “Leviathan” embraces the lifelessness of modern Russia to say something about life itself.

Roman Polanski found a real return to his best and most affecting in “The Pianist”. The film begins quite innocuously, with Wladyslaw Szpilman (Adrien Brody) finding success as a up-and-coming pianist. He and his family live peacefully in Poland, until the Nazi invasion.

Whereupon this, Szpilman and his family are separated, without him being able to contact them or find out whether they are alive or not. What ensues is Szpilman having to abandon his piano playing in order to survive, hiding in various parts of Warsaw. Polanski, clearly invested in the narrative, shows Szpilman’s dire attempts to keep his distance from the Nazis as tragic.

The invasion of Poland is depicted as arbitrary, giving us a sense of purposelessness that this well-ordered family has been separated. Nevertheless, Polanski evidently admires Szpilman’s hunger for survival, and shows that he, against the odds, defied the terrible reign of Nazi-occupied Poland.