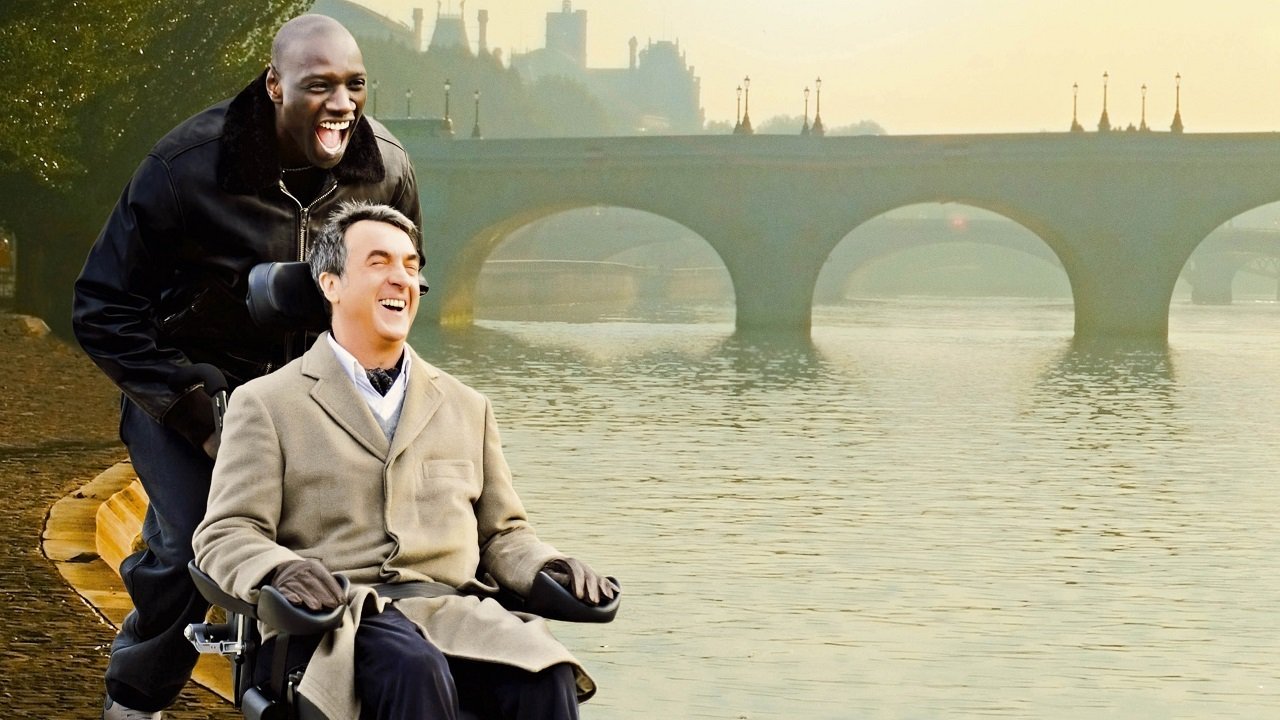 Although not as rich and varied as the Italian Comedy industry, French cinema compensates for the lack of variety with continuous growth in the quality of the films. These comedies, though, still include intelligent humour, innovative technology, musicals, and dramedies. Below is a list of the 20 most essential French comedies. 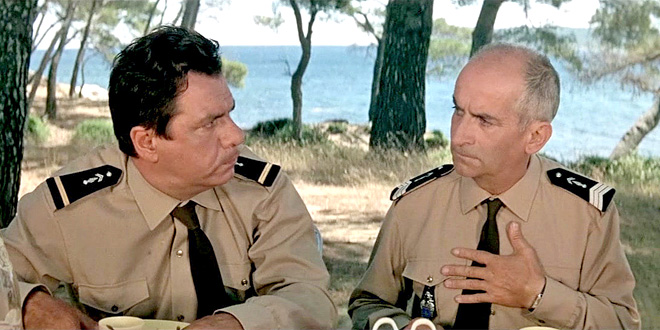 It may seem a bit exaggerated to place this series of movies as one of the greats of comedy, but the series solidified Louis de Funès’ iconic status as one of the most renowned French actors of all time. The series is widely loved, mainly throughout Europe, and well-known in countries near France, such as Portugal, Spain, Germany and Italy. For its fame and reputation but also for its direct, straightforward, and immediately humourous moments, this movie belongs on the list.

Louis de Funès plays an over-zealous and over-cautious gendarme in a small French village, who at all times tries to enforce some order onto the village, but he sees his efforts being overplayed by certain “enemies” who only want to disrupt the peace. 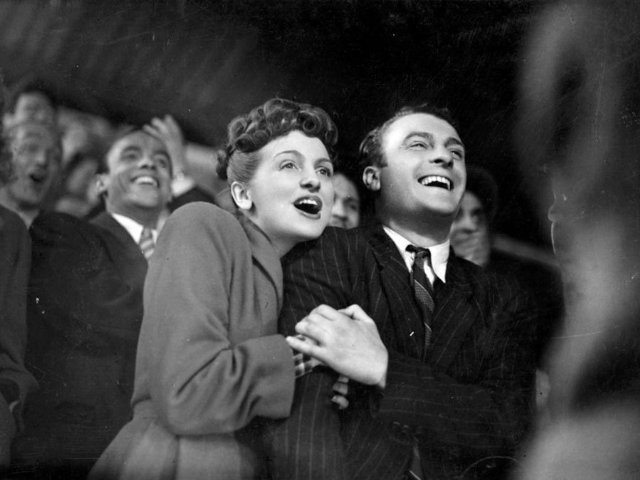 Chosen for this list for its unique characteristics and singularity, the film is a highly referenced Jacques Becker’ release, coming after the end of the Second World War. The story is of Antoine and Antoinette, a young couple who live contently in their simple life, but there are also some tragic elements, making this the only film on the list with this characteristic.

Antoine is jealous of the attention men give to his wife and Antoinette is romantically pursued by Mr. Roland, a grocer from across the street. Although this passion isn’t reciprocated, Mr. Roland still insists, leading to some of the tragic elements of the plot. The comedic and major part of the storyline is focused on a lottery ticket that gives the couple a new vision of life, but also a major headache and a series of tribulations that make Antoine almost go completely nuts.

The only musical-romantic-comedy on the list shows its humourous elements mostly by songs inappropriately placed throughout the movie. The movie is quite original not only in its presentation of adding musical scenes in unthinkable parts of the movie, but also for its very well-written storyline: from its beginning, the film shows complex elements within the relationships of several interconnected characters.

That is the real story of the movie: relationships. The purpose is the construction of relationships between people that are more connected and related to one another than one might think, initially.

Perhaps the most chaotic release on this list, this film is presented almost as a theatre play with an entangled storyline and extravagant characters that provide the necessary comedic darkness.

The action takes place in the apartment of the “headquarters” of the SOS Friendship hotline. Two of the workers have to work on Christmas Eve, contrary to their wishes. Along the way they are disturbed by the screams of their colleague who has gotten stuck in the elevator, the foreign neighbor who appears always at the wrong time offering dubious pastries, the trailer trash couple who ends up killing the lift repairman, and finally the depressed transvestite who feels lonely.

The classic comedy by Jean Renoir depicts the French bourgeoisie of the early 30s, but it also may be viewed as an attempt to describe contemporary France. Boudu is a tramp who jumps into the river Seine, but is rescued by Edouard Lestingois, a bourgeois bookseller, who takes him into his home.

The movie strongly criticizes the bourgeois mannerisms and ways of life, trying to redeem and save someone who doesn’t want to be saved. The tramp may be seen as the object of exploitation of society and a symbol of unwanted change. He may be viewed as a fool, unpleasant and anarchic. He also may be viewed as outside-the-box, unusual, and atypical, symbolic of the inner desires of oneself.

It’s Renoir’s greatest comedy, and although he has very few, this is certainly a classic to keep and remember for a long, long time.

A widely acclaimed movie that, at the time, was the most expensive movie of the French industry, the film is based on the comic books of Astérix & Obélix and includes fast-paced action, amusing characters, and witty dialogue. One of most star-studded movies on this list, the film features Gérard Depardieu, Christian Clavier, Monica Bellucci, Claude Rich, Jamel Debbouze, Alain Chabat, or Édouard Baer, among others.

Queen Cleopatra makes a bet with Julius Caesar: if the Egyptians build a larger palace than Caesar’s in the short time period of three months, then Caesar must acknowledge that Egypt is the greatest of nations. She charges Numerobis, her customary architect, to build the palace, who calls Astérix and Obélix to help speed up the work, with Panoramix’s secret potion. Following a series of misfortunes for Caesar’s side and seeing that he may lose the bet, he tries everything possible in order to disrupt Numerobis’ efforts.

The comedic parts are largely based on characters’ stupidity and wrongdoings, but also by introducing intelligent humor into the recipe with some physical humor to complete the humourous feast.

“Le diner de cons” runs for only 80 minutes, but features a very dense storyline that, despite its few characters and a simple plot, surprises with its creativity and comedy. A straightforward comedy with a tiny bit of satire attached to it, the film mocks those who think they are better than others.

Despite not being the main objective of the movie, those feelings come to mind with the running of the action: Pierre Brochant is a highly successful publisher, rich and well-married. He attends, on a weekly basis, an idiots’ dinner, where each successful guest must bring along an idiot, in order to mock and make fun of the idiot.

But it seems karma attacks when it is needed the most. Brochant is stricken with very acute back pains and has to rely on the idiot he initially brought to dinner, beginning a series of very funny episodic moments between these two quite different personalities and showing just how interconnected and dependent we all are. 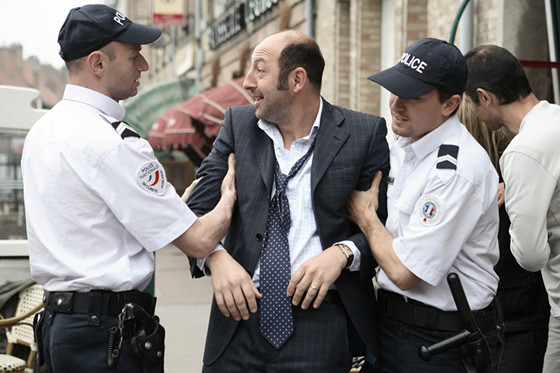 This film became a surprisingly huge success after its release, breaking the record held by the 2nd placed of the list, “La Grande Vadrouille,” surpassing its number of admissions. Despite starting almost as an insult to the Northern French region, the movie ends up serving as huge praise to the benevolent, hospitable, and simple ways of the North.

Also, the film highly develops the Ch’ti language throughout. Ch’ti is a romance language widely spoken in the North of France and in certain parts of Belgium. Although usually referenced in a comical manner, the language is highly praised for its singularity and historical setting.

The film tells the story of Philippe Abrams, a manager of a postal service, who after seeking a promotion, which is instead awarded to a disabled person, fakes being paraplegic to get the job. He is found out and punished by being sent to Bergues for two years, a city in the North of France. 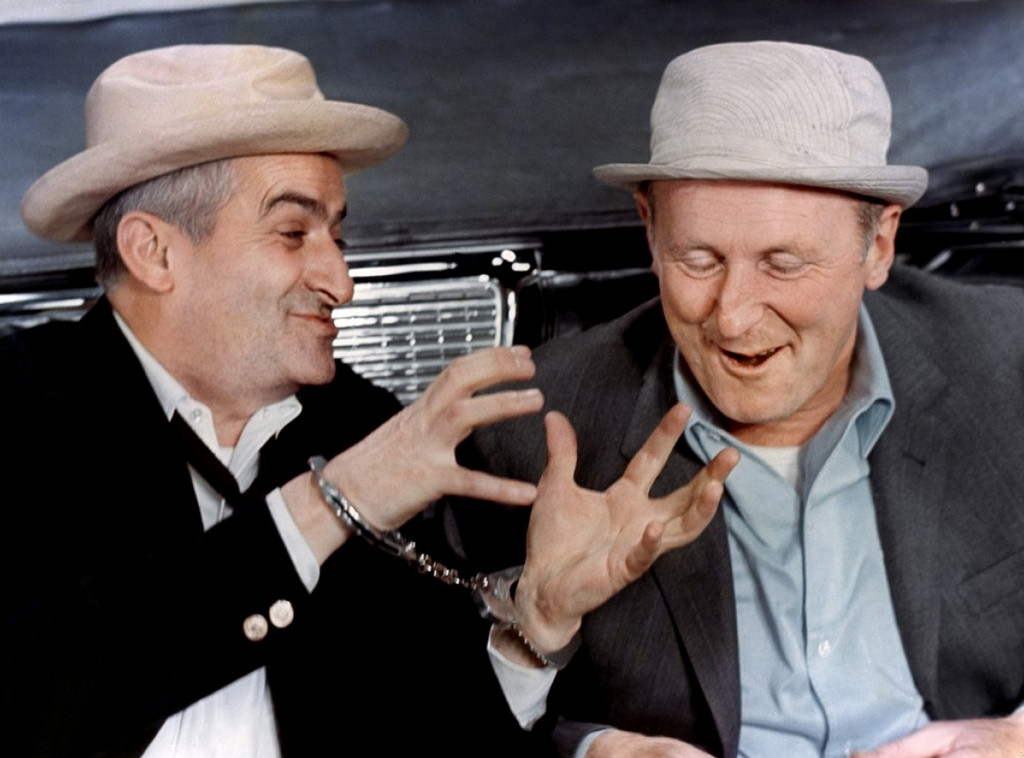 “Le corniaud,” or “The Sucker,” is still one of the highest-grossing movies ever released in France. Another Bourvil-Louis de Funès collaboration, it features a quite interesting storyline with great performances, from both Bourvil and Louis de Funès.

Louis de Funès plays a gangster boss who has to arrange the transportation of several stolen goods, such as jewels, cocaine, and money. Instead of putting himself on the line or any of his men, he convinces a strange man to do the job. Bourvil plays the sucker and has to transport the “goods” in a Cadillac without his knowledge.

One of the great features of this movie is the combination of plot and comedy. Sometimes, comedy movies have the tendency to become boring with the running of the action; I admit this movie would be better if it were 30, 20 minutes shorter, but it still maintains a great degree of fun with a great collaboration from two legendary comedic actors. The film is also surprising for its “diplomatic” image for Italy and France, including both countries’ languages.

Claude Autant-Lara’s best-known movie was one of the most-watched movies in French Cinema industry. Claude Autant-Lara is well-known for his diversity of styles and his versatility, directing comedies, dramas, action, or crime films. The plot takes place in Paris, 1942, during World War II.

The film stars Bourvil as a black-marketer named Marcel Martin, whose job is to deliver parcels to certain clients, and the legendary Jean Gabin as Grandgil, a famous painter and a somewhat unexpected and unstable character.

Marcel has to deliver parcels of meat to a client, and after knowing that his partner was arrested, he has to hire someone to replace him. The hired person is Grandgil. After a series of ordeals started by Grandgil such as provoking and “robbing” Jambier, a grocer who is Marcel’s boss, played by Louis de Funès, destroying a bar, and hitting a policeman, they can’t deliver the parcels and are arrested by German patrols. Both are separated and only see each other many years later. It’s hilarious!