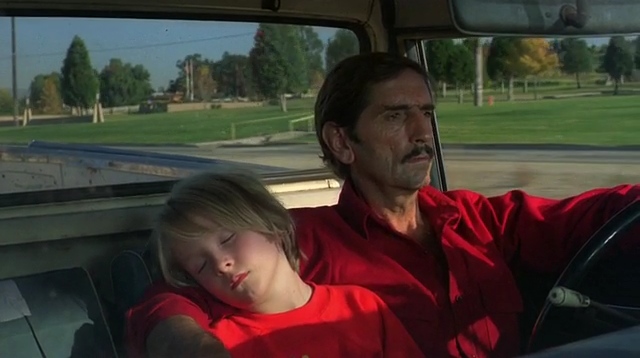 Hunter: What’s that?
Travis: A vacant lot. A vacant lot, I bought that land when we were all together, with your mom. I thought we might live there someday.
Hunter: Where?
Travis: Paris…Texas.

If there were aliens boarding our planet, this would be the movie that would teach them about the nature of feeling mankind. The perplexing experience that is the journey in this film is testament to what powerful conversation between characters is all about. Following a narrative scheme, it is dismembered by all its characters living each of their lives in the order they seem fit, rather than what’s appropriate.

The sense of regret and burden are placed in the form of beasts that torment the souls of their protagonist. They only allow them to experience a sense of consolation in the barren scenery, finding matching promises and ajar compromises in mesmerizing conclusions not by guns, explosions and blood, but rather by speaking and revealing through words what the human experience can be like.

Michael Fassbender and his work leave in awe what little we can reconstruct from the impact of his performances. “Hunger” is no exception to this fact. Sharing the same visual and narrative style to Steve McQueen’s posterior work, “Shame” (2011), the morbid and truthful imagery is accompanied by equivalent strength in what is said, opting to not overachieve or complicate the liquid aspect of words with stiffness that comes from cuts, additions, and effects. Rather, McQueen opts to leave the camera to withstand a conversation, and see if we can withstand it as well.

Of course, other lines or other performers wouldn’t have added up in the same way as this magnificent work, as more is often considered to be better. Yet, here we are shown how powerfully bare resources and meanings can be woven into a discomforting yet alluring experience.

Roger “Verbal” Kint: The greatest trick the Devil ever pulled was convincing the world he didn’t exist.

This entire story works as an artifice, a mechanism so well devised it is invisible not by the facts, but by the way it is presented onto the surface of the narrative. The facts can be woven through actions to determine who is responsible, or who is the one that exerts the will of change within a story, but the narrative of this thrilling product is shaped in a way that Keyser Söze is invisible yet omnipresent. An untamed exercise in dialogue, it is difficult to contain.

If not for Kevin Spacey’s frame of acting, the story cannot be held together. The director didn’t just give the man time on screen, he gave him quality time. Dialogue as a source of camouflage works in another unattended level that isn’t often seen, as narration or voice-overs are more used to patch errors and mistakes in modern cinema, much like flashbacks and monologues. Here instead, a potent tool of storytelling is used to its full extent to provide, rather than withdraw from the experience.

Will Hunting: The only feeling of real loss is when you love someone more than you love yourself.

If it were about selecting the best lines from this film, we could fit the entire script here. “Good Will Hunting” transcended the mere college project onto the screen in a way that you can feel its pulse. The unnerving presence of the late Robin Williams is brilliant, be it as an encouraging doctor, prankster or psychologist, and there is a sheer force of life in his work that makes the most resilient to emotion question aspects of life.

The work of Ben Affleck and Matt Damon here is sensitive, and it doesn’t need fanciful words to adorn an experience. It just needs the sheer force of timed lines and journeys. “Good Will Hunting” works in balancing the other characters to improve the protagonist, as Sean Maguire and Chuckie Sullivan are that source of care for Will. Nothing more, nothing less, just friendship and love as it comes, rather than what we make it.

The journey keeps evolving from situation to situation to a full-blown spectacle of will (and Will) to drive the spectator through the maturing aspects of the protagonist, while also making the palpating guilt more visible and visible, releasing it at last in an embrace full of forgiveness and life itself.

Frank Costello: When I was your age, they would say you could become cops or criminals; today what I’m saying to you is this: When facing a loaded gun, what’s the difference?

Martin Scorsese’s work is finely tuned here to create an ambience, yet also many settings. Through the whole idea of loyalty and the betrayal of it, a story of this magnitude can work on levels of joy, laughter, fascination, intrigue and thrill. A shared world is not divided, but fragmented into a whole that follows Matt Damon, Leonardo DiCaprio and Jack Nicholson on a path of discovery and introspection.

Through a classic introduction featuring the iconic “Gimme Shelter” by the Rolling Stones, Scorsese uses his devious backstory domain to fruitful effect. Each character works as a stage, representing the path one has to follow to become the other, showing a committed (onscreen as always) DiCaprio, a Matt Damon that holds back his classic beleaguering speech to command almost half of the given protagonism on screen.

And then comes Nicholson, not holding back, as always. Each line isn’t perfectly suited to his character, but rather he makes multiple uses of them to convey a personification of loyalty within the fringes of a corrupt world, that has many of us watchers wondering about the thin line that coexists on the other side.

Ray: A great day this has turned out to be. I’m suicidal, me mate tries to kill me, me gun gets nicked and we’re still in fucking Bruges.

Yes, Martin McDonagh’s work is more grounded and groomed in “Seven Psychopaths” (2012), but the enchantment of this film lays in making an unknown (or beleaguered by jokes, at least) location like Bruges, a place that speaks not only with a sense of fulfillment and perfection, but with rooted irony and irreverence.

The work from Colin Farrell and Brendan Gleeson is beautifully and realistically woven; they each hold their personal beats, yet still manage to compete with them, with the spectator never knowing if they are through with their demons or if their demons are through with them. Every aspect here has a dark semblance (that is nowadays very difficult to create) that drives the film through every situation that can kill with a joke or a gun, leaving a space for dramatic arches to develop throughout. 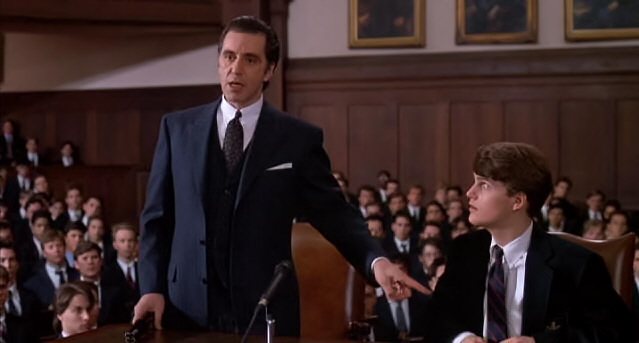 Lt. Col. Frank Slade: I don’t know if Charlie’s silence here is right or wrong, am not a judge or jury. But I can tell you this he won’t sell anybody out to buy his future! And that my friend is called integrity, that’s called courage! Now that’s the stuff leaders should be made of!

This is another mind-blowing performance from Al Pacino, who technically isn’t even the main character here, but still made himself more assembled and patronizing (in the good kind of way) than many film characters. The characterization of his blindness isn’t used as a classic sympathy-balancing device, rather making it all about a condition rooted to reality; a condition of true depth, stubbornness, and sheer presence in the right place and time.

Here is a clear case of how the imbalance of dialogues can be shifted to a positive effect, like in “Silver Linings Playbook” (2012), making it not about the suffering, but rather the knowledge. Charlie Simms is somewhat forgettable to good effect, so it helps us empathize to an extent that we replace him with us, restructuring the nature of the story to our experience.

It makes for a powerful shift into a lasting experience, something that moves, with lasting and interesting soliloquies like the one above, or others from Frank Slade’s experience that make the film transpire to a rich degree in every story that wraps every character.

Jules Winnfield: You ever read the Bible, Brett?
Brett: Yes!
Jules Winnfield: There’s a passage that I got memorized, seems appropriate for this situation: Ezekiel 25,17. “The path of the righteous man is beset on all sides by the iniquities of the selfish and the tyranny of evil men. Blessed is he who, in the name of the charity and good will, shepherds the weak through the valley of darkness, for he is truly his brother’s keeper and the finder of lost children. And I will strike down upon thee with great vengeance and furious anger those who attempt to poison and destroy my brothers. And you will know my name is the Lord when I lay my vengeance upon thee.

Quentin Tarantino is the boss in this film, leaving us to question if we are sufficient enough to even hold a pen/pencil and a notepad or notebook. There is something about the imagery, sound and sequences of this film that unnerve as to how it was all taken from the written experience.

The cast shines on its own, but besides that, there is a sense of texture and layers to the dialogues, each accompanied by a bedazzling source of irreverence to the fourth wall, as to the characters driven inside the film.

The notion of comedy and violence are tough tasks to balance, but here Tarantino manages to elevate these often-trivialized factors into a refined spectacle that has religion, fate, memoirs and dance in a true eclectic sense that no other film or entire list can carve.