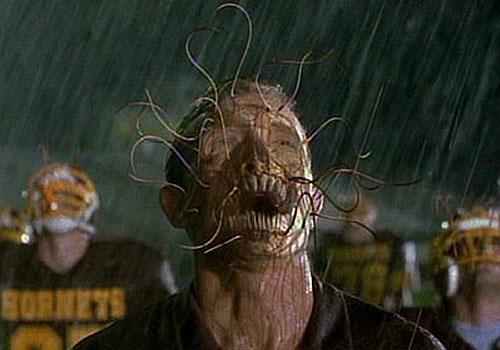 Arguably The Offspring’s finest and most listened to track, “The Kids Aren’t Alright” originally featured on their iconic fifth album “Americana” which along with seminal work by Blink 182, Fall Out Boy and Greenday, played a critical role in the rise of pop punk throughout the 1990s into the early 2000’s, reshaping the punk genre as it was known forever.

And whilst it was predominantly teen comedies that most frequently championed the music genre in film, The Offspring managed to seamlessly break their way into sci-fi and horror pieces, with a musical cameo in the bizarre “Idle Hands” and the use of the aforementioned track “The Kids Aren’t Alright” to kick off director Robert Rodriguez’s alien invasion cult classic “The Faculty”.

A faultless skate punk anthem, its combines remarkable guitar riffs with memorable sing-along lyrics, telling the distressing tale of a generation of misfits, teen angst and the wasted potential in youths, as it suitably soundtracks the introduction of the films outcast characters that are a peculiar handful amongst the many weird and wonderful entities striving to be unique or find themselves at the fictional high school, Herrington High.

The title of the track also cleverly serving as a double meaning, not only relating to the cast of loners and rebels misspending their prospective lives, but when the antagonist body snatching extra-terrestrials start taking over the titular faculty and it’s pupils, the kids definitely aren’t alright.

An anomaly on the generally upbeat “Americana” due to its considerably dark overtones, the song was allegedly written following lead singer Dexter Holland’s return to his home town of Garden Grove, Orange County in California, in which tales of woe and devastation began to unwind revolving around a number of people he grew up with as a child, in turn, forming one of the bands most adored and noteworthy tracks that offers an effortlessly cool opening to “The Faculty” playing out over the top of the film’s opening credits.

Whilst modern day pop punk has been brandished with a bad reputation on occasion due to certain bands misogynistic opinions and poor behaviour towards the female sex, a situation that fundamentally needs resolving. Nevertheless there has always been a home for female fronted bands in punk rock thanks to the likes of The Runaways, Bikini Kill, Letters to Cleo, The Distillers and The Slits.

A number of which were showcased in Gil Junger’s iconic romantic comedy “10 Things I Hate About You”, which fit outstandingly amongst the film’s empowering female tenors of  independence and strength, defying the evident rise in all male teen comedies that were produced in the 1990’s, which so often portrayed women in the wrong light.

The track put to best use in the film is unquestionably Joan Jett’s catchy debut single “Bad Reputation”. Used as an introductory track to the film’s rebellious heroine Kat Stratford portrayed by Julia Stiles. As a group of typically popular girls dance in their convertible car to the Barenaked Ladies infectious hit “One Week” they are quickly drowned out by the arrival of Kat pulling up at the side of them blasting out Jett’s track, in turn, scowling at the group of now terrified looking conceited girls.

One half of the founding members of the influential punk band The Runaways along with drummer Sandy West, Joan Jett is a feminist icon, known as the Godmother of Punk, who found further success after life with her band with a highly accredited solo career.

It has since been used as a trademark anthem for a number of resilient female characters including Chloe Grace Moretz’s Hit Girl in “Kick Ass”, Emma Stone’s lead in “Easy A”, and Krysten Ritter as Jessica Jones in the trailer for her titular television series. Yet despite its inclusion in a number of pieces since, its original use in “10 Things I Hate About You” is its finest cinematic outing to date.

Song: The Sex Pistols – No Fun (The Stooges Cover) 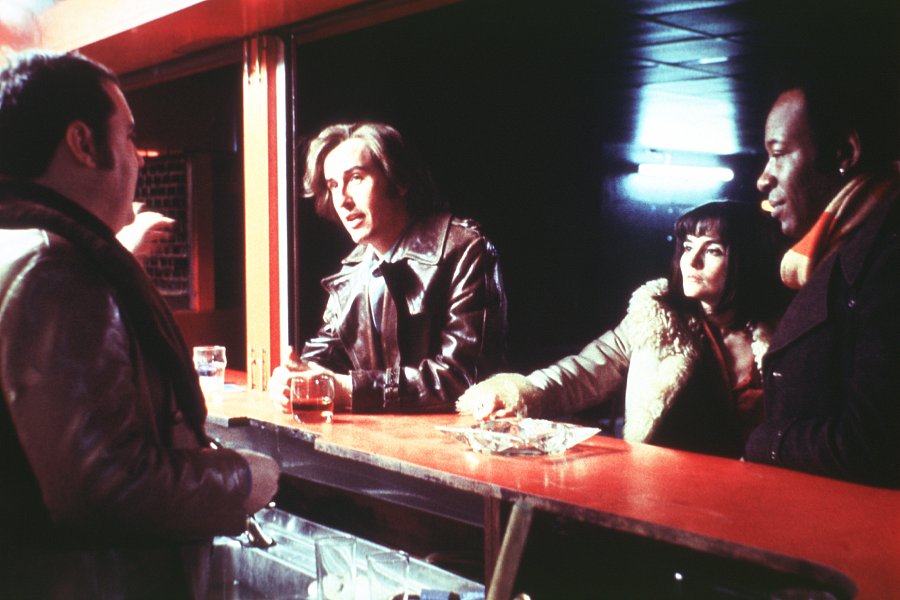 A loosely based on fact biopic, “24 Hour Party People” combined the truth, rumours and urban myths, to tell the tale of Tony Wilson, a journalist and innovative producer during the rise of the music scene in 1970s Manchester.

The scene in question shows the now dubbed ‘gig that changed the world’, a portrayal of the punk pioneers, The Sex Pistols and their first live performance in the Manchester Lesser Free Trade Hall. They were given the chance to perform by event organisers Pete Shelley and Howard Devoto, better known as the already formed punk outfit the Buzzcocks.

Performing in front of a mere 42 people, the band not only showcased their energetic abilities and potential to rise, but also acting as influences for a number of currently unformed Manchester based bands that would become fundamental to the scene, as their founding members sat amongst the woefully small audience.

The most notable of the artists in the room were Warsaw, who would go on to become Joy Division, eventually leading to the birth of New Order, as well as Mick Hucknall who would form pop band Simply Red.

A cover of The Stooges 1969 song “No Fun”, it is without question that The Stooges whilst not being the reasoning behind the genre’s popular success, were unquestionably the first band to make waves on the punk rock scene. Using real footage from the legendary gig, mixed with a new recording of the audience participation, as a few select audience members enthusiastically bounce around the floor, including John the postman, an actual postman.

The Sex Pistols with their un-tuned instruments and poor acoustics, they give an unchained, brash performance that is raw, gritty and full of energy, an essential depiction of what punk music has stood for since the very beginning.

As Tony Wilson, the piece’s main subject, works his way around the room pointing out other future artists and influential figures, the soundtrack transitions into other memorable tracks crafted by the acts that may not have come to fruition without the likes of the aspiring Wilson, not to mention Pete Shelley and Howard Devoto of The Buzzcocks who gave bands like The Sex Pistols the opportunity to perform at critical venues such as this.

This was a highly important point in the film displaying a vital time in the UK’s music scene in the 1970’s, and the use of The Sex Pistols covering The Stooges song is faultless in outlining the genre’s elevation.

“The Departed” much like a lot of Martin Scorsese’s other seminal films, makes incredible use of The Rolling Stones’ memorable records on its soundtrack. However, there is another band that gets an endearing amount of celebration recurring throughout the Academy Award film, and that is the Boston based Irish punk band The Dropkick Murphys, whos flagship track “I’m Shipping Up To Boston”, plays out during several scenes. This was no doubt a sure fire contribution to this becoming their bestselling single, becoming certified platinum in 2006.

As is the case with a number of Martin Scorsese films, dating back to “Raging Bull” in 1980, the famous country and western singer Robbie Robertson has acted as a music producer for the director, as well as an educated advisor during the task of picking the records for the film’s soundtrack.

As he hand selected the Celtic punk track in a number of scenes, most notably to unravel in the background during a crucial turning point in the crime thriller, as the undercover moles on either side of the law must decide where their real priorities lie before further blood is spilt.

Apparently written after the discovery of a number of unfinished lyrics scribbled down and forgotten about by the folk singer and songwriter Woody Guthrie, the wording simply and effectively centres around a sailor who loses his wooden leg whilst on his way into Boston harbour.

The Dropkick Murphy’s made the lyrics their own with their unforgettable brazen style and bold sound stamped on it. The shout-y singalong lyrics are unforgettable. “I’m Shipping Up to Boston” perfectly reflects the films locations and setting, with its routes firmly planted in Boston’s Irish community and heritage.

The Inventive and audacious director, Jeremy Saulnier’s following up feature to his raw and unyielding independent thriller “Blue Ruin”, “Green Room” is a relentless barrage of harrowing and often cruel violence, dark humour and intense story-telling that is expertly crafted by its tone and pacing, all tied together by its stunning visuals, gripping narrative and energetic soundtrack that fully embodies the punk rock style and demeanour of bold defiance.

The film follows The Ain’t Rights, a young hardcore band with traditional punk ideologies, as they try to make it big the old fashion way, steering clear of modern day trends such as social media advertising and opting to live on the road constantly on a ramshackle tour, playing any venue available to them for a handful of cash allowing them to continue.

This unwavering methodology leads them to an opening performance at an underground bar populated by skinheads and white supremacists. This is where the films lead and bands guitarist, Pat, played by Anton Yelchin has the courageous and unflinching yet highly naïve idea to open their set with a cover of the San Francisco based punk band, The Dead Kennedy’s politically charged single “Nazi Punks Fuck Off”.

As expected, the hate filled audience of boots and braces don’t take too kindly to the bands undaunted rendition of the 1981 hit, as they are bombarded with glass bottles and abuse. This dogged and determined live performance by the pieces protagonist band sets up the entire tone for the film, trying to achieve shock value, it is a gritty tidal wave of lurid noise and rebellion that doesn’t pull its punches or beat around the bush, sentiments that both “Green Room” and the vivid music genre both strive to stand for.

It’s from this point that things only get worse for the band as they witness a murder committed by the band that they are opening up the stage for, leading to the Punks vs. Nazis tale of survival that follows.