A flashback, or analepsis, is the classic narrative device that shows something set in a past time in relation to the present time of the narration. The flashback technique is commonly used in literature, television, cinema and in every form of narration.

It interrupts the flow of the main sequence of events and opens a window into a different time. Sometimes this time is in the future: this is the case of the flash-forward, or prolepsis.

By showing something occurred in the past, the flashback often reveals something about the main narration, or it completes it: a great revelation or a twist can easily be delivered through it.

At the same time, many great filmmakers have exploited the potential ambiguity of the flashback, especially when it is introduced in the movie by a character’s narration: how can the spectator be sure that what he is being told (and shown) is real?

Sometimes it can be as long as entire movie, sometimes it is just a few seconds long (for example, the critic’s flashback to his childhood at the end of Ratatouille).

This list looks at the best flashback sequences in cinema history.

The Birth of a Nation recently reached its first century of existence; this anniversary revived the discussion among critics about its relevance and the impression it leaves on modern days’ spectators.

It is hard to find such a polarized film; D. W. Griffith’s masterpiece costitutes on of those rare cases in which the aesthetic and the moral review of a movie are diametrical opposed.

Everyone who knows anything about film history cannot but be amazed by the artistry displayed by the film, full of innovative techniques, many of which were invented by Griffith (his ability was also to gather great ideas from filmmakers of his time and develop them to their full extent).

At the same time, the blatant racist propaganda of the film make it an hard watch: as Allyson Hobbs wrote, what Griffith did was “venerating and glorifying the Ku Klux Klan as the only way to restore the country to its original greatness”.

While the discussion about the film’s moral value still leaves it marked as the product of racist culture, its cinematic value is indisputable.

The flashback is one of the innovations of this film, and D. W. Griffith can be called the inventor of flashback in cinema. He actually called it “switchback”, but the meaning is the same. Griffith liked the idea to play with narrative and time: for example, another of his masterfully employed techniques is the parallel narrative. 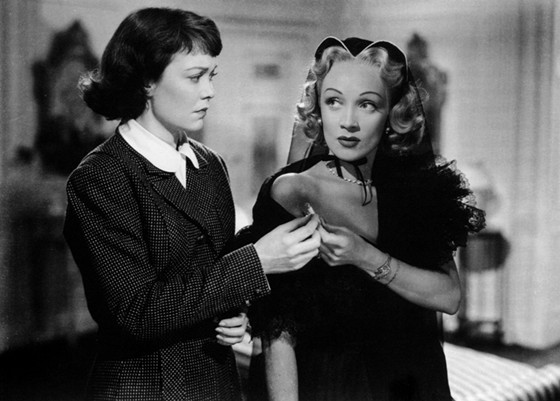 Stage Fright is one of the first movies from Alfred Hitchcock’s golden era of filmmaking. It was released in 1950 and starred Jane Wyman, Marlene Dietrich and Richard Todd.

It has a theatrical setting and is rich with light moments which are closer to a simpler kind of comedy rather than to the subtly irony Hitchcock employed in latter films.

The flashback from this films caused a great deal of discussion both at the time of release and in recent times. In the beginning of the film the actor Jonathan Cooper (Todd) asks help from his friend Eve Gill (Wyman); he tells her about how he is being sought by the police for a murder he did not commit; as he speaks, the events are shown through flashback.

The sequence was much discussed due to its peculiar nature: presented as a regular flashback, it is later revealed to be untrue, and that the viewer has been brought to believe a false account of the events, just like Wyman’ character has. Many critics found the twist as unjustified toward the viewer; Hitchcock himself later considered it an error, and openly regretted it.

Still, as some of the films in this list prove, a false flashback can rightly be called such without diminishng the film’s value; in fact, this narrative device raises an interesting question about what can be believed and what cannot, both in cinema and in real life.

Hitchcock himself once said: “Strangely enough, in movies, people never object if a man is shown telling a lie. And it’s also acceptable, when a character tells a story about the past, for the flashback to show it as if it were taking place in the present. So why is it that we can’t tell a lie through a flashback?”

13. The Discreet Charm of the Bourgeoisie

Released in 1972, The Discreet Charm of the Bourgeoisie is considered my many as Luis Buñuel’s masterpiece, since it is the film that best balances the main elements of his artistry: surrealism, satire and oneiric sequences.

The film follows a group of six wealthy men and women and their attempt at having a meal; a series of accidents and absurd situations constantly stop them from doing so, while the line between reality and dream gets thinner and thinner.

In one scene, while three bourgeoise women try to order some drinks at a café which seems to be completely out of all beverages, they are approached by a young and melancholic soldier who previously captured their attention; the young man sits at their table and immediately asks them to hear his story.

A flashback then starts, in which it is revealed how the soldier’s mother died when he was still a boy, leaving him in the complete custody of his harsh father who decided to force him into military life. Then, the story continues with the apparition of the ghost of the dead mother, who reveals a terrible truth to her son and then asks him to execute vengeance on her behalf.

This flashback does not completely adhere to reality, and as many sequences in Buñuel’s films leaves it to the spectator to guess what is real and what is not.

On of the most experimental films from the early 1960’s, La Jetée is a French production directed by Chris Marker. It is a science fiction feature and it is almost completely made of still photographs with a voice-over that narrates the events.

The story is set after World War III, when a group of scientists are developing a way to transport men in the past in order to prevent the horrible events of the war. The protagonist is the man chosen for the job; he is haunted by a memory we see in the beginning of the film through a flashback: as a boy, in an airport, he witnessed a man’s death.

By the end of the film, the true nature of this memory will be revealed, and what seemed a regular flashback will become something more complicated and disturbing. 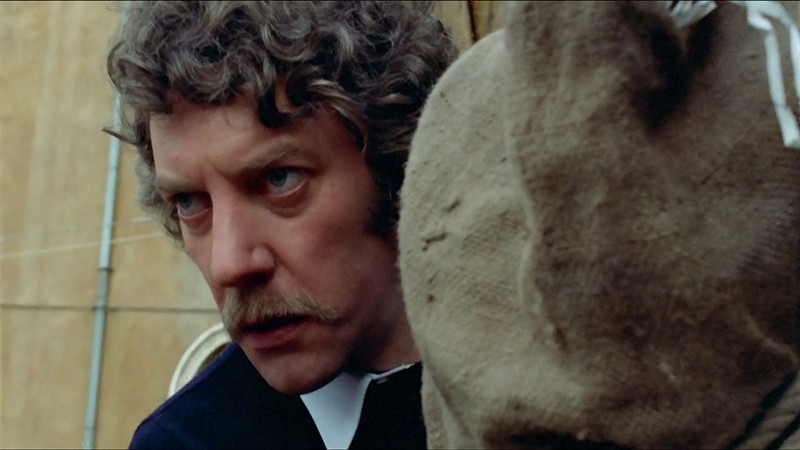 Nicolas Roeg’s early career was as a cinematographer; he soon became a director and became the man behind many cult classics such as Performance (1970), The Man who Fell to Hearth (1976) and Don’t Look Now (1973), the latter of which is based on short supernatural story by Daphne du Maurier, and stars Donald Sutherland and Julie Christie. The two actors portray a couple who has recently lost their daughter and move to Venice while still in grief.

A series of mysterious happenings throw a shadow on their lives. The film perfectly exemplifies Roeg’s style: fragmented and non-linear, it relies heavily on editing and what has been called an “impressionistic” approach to color.

The movie uses many flashbacks and flash-forwards, usually very quickly edited into the scene; some of them are straight-forwards memories of past life, but there are also many others more similar to glimpses or visions, which add to the oneiric and mysterious nature of the plot.

Together with The Sixth Sense, The Usual Suspects has become the quintessential “twist ending” film. Released in 1995, the film was Bryan Singer’s second film after Public Access; both these films of his were written by Christopher McQuarrie.

The film was conceived by Singer and McQuarrie starting with the image of five criminals in a line-up; they developed that idea, which later became the movie’s poster, and wrote the story of how the five criminals meet each other and are offered a job by criminal lord Keyser Söze.

The story of the criminals is told through flashbacks by Roger “Verbal” Kint (Kevin Spacey) to agent Dave Kujan (Chazz Palminteri), who is investigating the criminals’ heist which has failed and ended in a bloodbath in the San Pedro Bay.

Verbal’s narration unfolds the events while agent Kujan tries to make sense of it all; a particular sequence does not follow the main storyline but instead focuses on a story about legendary criminal Keyser Söze and a chilling occurrence in his early criminal days in Turkey.

The film’s flashback-based structure, as Singer admitted, makes it similar to the narrative techniques of Rashomon and Citizen Kane.

After his low budget debut Following, Christopher Nolan’s next project was Memento, starring Guy Pearce and Carrie-Ann Moss. The film displays all of the traits that later characterized Nolan’s signature style: non-linear narrative, character introspection, the theme of memory and the concept of truth.

All of this is achieved through the narrative device of the protagonist’s syndrome, anterograde amnesia, which makes him unable to utilize his long-term memory. He has to reconstruct his life in order to solve the mistery of his wife’s murder.

The film peculiar narrative choice is to show the events in reverse order, while another storyline intersected with the main one is shown in chronological order and in black and white. In cinema history there have rarely been movies that experimented to such an extent with the concepts of flashback and non-linear narrative, to the point that Memento, as enticing as it can be, still is a difficult viewing experience, and it easy for the spectator to get lost.

Still, as later Nolan features such as The Prestige proved, the appeal of this director lies largely in the unconventional way he develops his stories.