Though only officially credited with directing seven films, Italian director Sergio Leone was a maverick that changed the western film genre and has been heavily influential on future directors such as Quentin Tarantino, Robert Rodriguez, Martin Scorsese, Emir Kusturica, Takashi Miike, and John Woo.

He is considered to be the originator of the Spaghetti western and four out of the five westerns that he directed could easily be included in a top 25 list of the greatest westerns ever made. His gangster drama Once Upon a Time in America may have been considered a classic at the time that it was released if it weren’t for the major cuts that the studio made, cutting out almost two hours of the four hour long epic.

Leone changed the mythology of what an American western was; making the characters more realistic and complex, making the good and bad guys look and dress similar, being unshaved, dirty, and sweating. His was a world of violence, where everyone is morally ambiguous and a person’s actions and relationships are based upon power and gaining retribution versus following an inner conscience.

These concepts were recreated in the over six hundred European westerns that were made between 1960 and 1980 [1]. Even the music created for his films by Ennio Morricone was often duplicated.

Leone’s films feature many staples that he became known for; including extreme facial close ups, zooms, long takes, quick editing effects, one liners, religious references, the use of food, an obsession with obtaining wealth, references to paintings and other films and popular culture, along with other symbols, and the always accompanying Ennio Morricone score.

As with many filmmakers, one could choose dozens of great scenes from just one of their films, so it’s never an easy task to narrow them down to a small number. The order that they are listed is simply with each movie beginning with the earliest release date.

This scene sets up the Joe character (Clint Eastwood) for this film and the rest of the Dollars trilogy. As he rides into town, some of the local gang members shoot at his mule and gets it frightened. They are trying to send him a message that he isn’t welcome in the town. As he’s walking towards them, the camera angle gets him from the side and he tells the coffin maker to “get three coffins ready.” The music starts to play, which is a bugle or trumpet and a singer just making sounds.

Then we get the first classic shot of Joe, a full body shot facing towards the camera with two bad guy’s backs towards the camera. This leads to some comedic banter where Joe asks them to apologize to his mule because it doesn’t understand and the bad guys laugh.

Then we have the first time that he does the classic head facing down, with the hat covering his eyes as he slowly looks up and we get a close up shot of his face. The music hits a high pitched noise to ramp up the tension and then the bad guys draw their guns and the camera cuts to a close up of just Joe’s hands, as he guns four men down. When he walks back, he tells the coffin maker “my mistake, four coffins.” 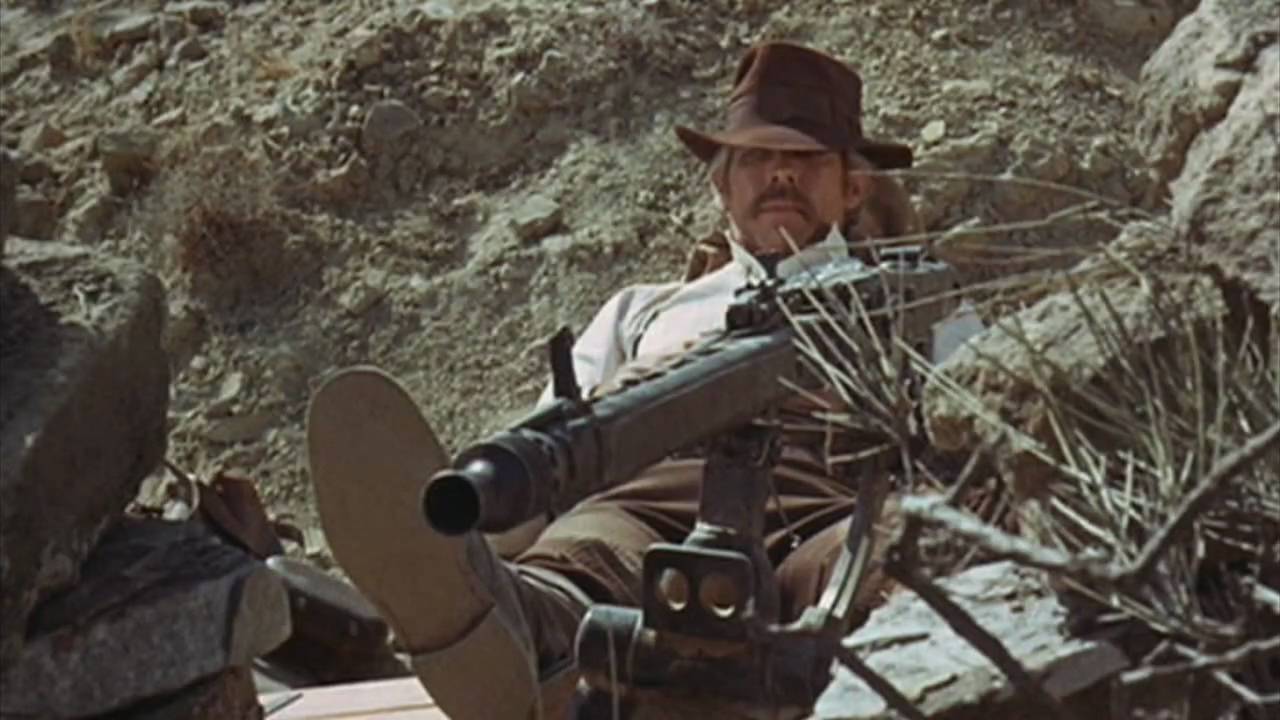 IRA dynamite man John H. Mallory (James Coburn) begins snoozing while waiting for the big gun fight and explosion, while Juan prays. Scenes of the tank and an army on horses begin coming towards the bridge. The camera pans from the tank to Juan.

Tension ramps up as Mallory is waiting for just the right time for when they are on the bridge to start shooting. He gives a thumb down to fire and Juan can’t work the modern machine gun. He ends up shooting out of control because he doesn’t know how to use the new weapon. The gunfire sets up for them to blow the bridge.

The clothing that everyone is wearing is less western and more modern because of the time period. Mallory puts cotton in his ears and delivers the mother of all explosions. It is way bigger than the bridge scene in the Wild Bunch. It is a massive explosion full of dust and smoke, with a romantic song playing that was the theme for the Mallory character because it was a success for the Mexican revolution.

13. The Final Duel Between Joe and Rojo 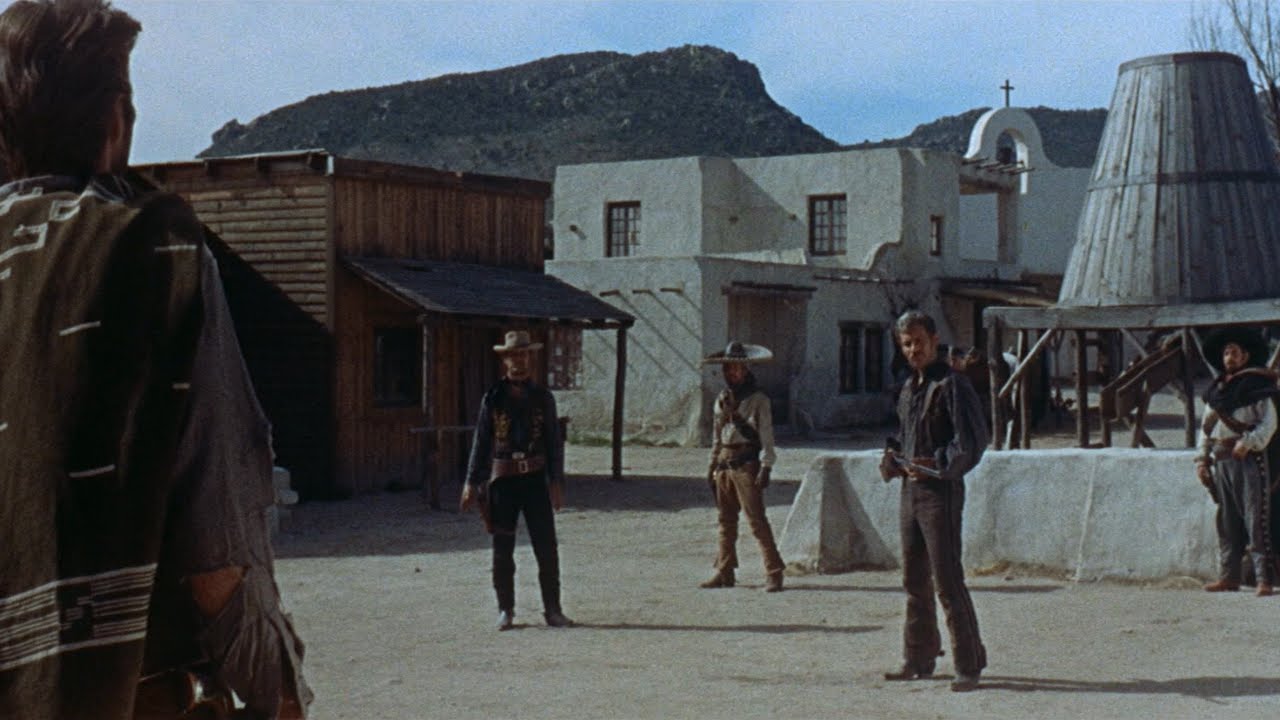 Joe must return back to town to save a man Rojo captured, who is tied and hanging from a post. Explosions go off just outside of the town and when the dust settles, Joe is standing there and the trumpet music starts to play. As he walks forward towards the camera, it cuts to close ups of the bad guy’s boots as they walk into the frame.

Rojo shoots him with the rifle in the chest; he falls down and gets back up, and then Rojo shoots him six more times while Joe is telling him that to kill me you have to hit the heart. The camera cuts to a close up of Rojo, sweat pouring down his face. Joe reveals under the poncho a steel chest-plate, then there are close ups of everyone’s faces.

There is a really long pause to build up the tension and then he guns down the four left of the gang and shoots the rifle out of Rojo’s hand. Joe says to Rojo that “when a man with a .45 meets a man with a rifle, you say the man with the pistol is a dead man.” Joe throws his gun down and they both load a bullet and Joe shoots Rojo. Finally we get a point of view shot of Rojo as he’s dying, looking up into the sun and spinning around until he falls down. 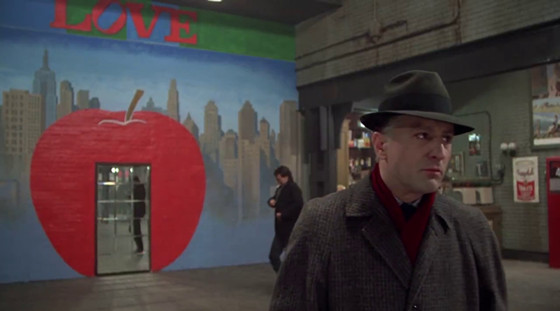 The scene starts as a flashback when Noodles is leaving New York in 1932 and then the Beatles song Yesterday starts to play and we are transported to 1968 when he returns and is looking at himself in the mirror, starting to reflect on his past.

11. The Final Duel Between Mortimer and Indio

The final duel between these two has a revenge factor to it, as Indio was involved in the death of Mortimer’s sister and they both are carrying watches that play music from when she died. Mortimer thinks that he shot Indio and rushes out of cover and Indio shoots his gun out of his hand. Indio takes out the watch and tells him that when the chimes end just pick up your gun and try, with him expecting this to be an easy kill because he has done this before.

When Indio is expecting the music to end, it keeps playing and we see a hand holding the other watch. The camera pans to Monco who has the other watch, then Indio, and then Mortimer. Indio wants to draw his gun but Monco points his rifle and shakes his head, he hands Mortimer his gun belt and says “try this.”

The trumpet music starts to play and Monco sits down to watch as we get close ups of their face and then they draw and Mortimer guns Indio down. Monco says “bravo.”

This original and unusual way of showing the main titles set the tone for this to be a different type of western, with the sole colors of black, red, and white varying through the sequences showing different images of people riding horses and being shot in gun fights. The music was distinct with the whistling sound and the lone guitar playing and then later on some people shouting “we can fight.”

Morricone had composed music for other films but this is the first one that people started to take notice of his greatness. When the actor’s and director’s names and the movie title appeared on the screen, gun shots fired and blasted them away. There was also a slight homage to the opening James Bond sequence of being in the cross hairs of a gun.

This panning sequence is excellent. It begins as Juan Miranda (Rod Steiger) and his peasant outlaws arrive in the government controlled city of Mesa Verde expecting the streets to be paved in gold. Juan starts out in front of the church where he sees a firing squad marching and some men standing against a wall.

The officer asks them if they have anything left to say, the imagery used was based on series of real firing squad photos. The camera then pans to a poster of the governor and we get a letterbox reference as Juan pulls apart the section of the governor’s eyes and he is witnessing the execution, through the eyes of the governor’s image.