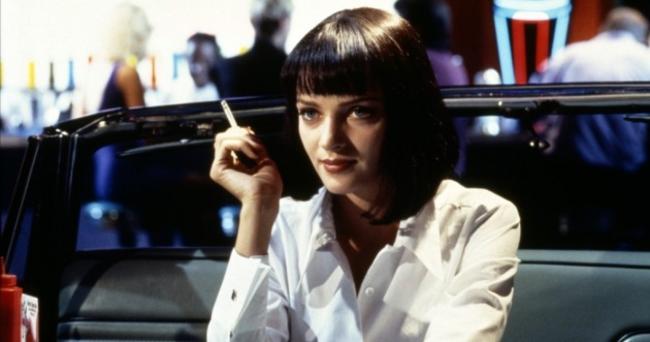 The dinner scene is a good example of how the mundane can be elevated and transformed into art. It is something familiar; something we all do all the time, either casually or formally, with friends and family. It may aim to celebrate an occasion or be a downright awkward experience that could not be avoided.

The common denominator in the following examples is that they take this simple premise and twist it into something entirely strange, be that shocking, disgusting, scary or explosive. In other words, the director can make a point and show rather than tell, allowing for good filmmaking, the kind that evokes feelings and can help the viewer identify with the protagonists.

This film is a fitting choice to open the list, as it is equal parts outrageously disgusting and fabulously theatrical. Overall, one would say it is unforgettable.

The title gives away pretty much all the important factors of this British production starring a ravishing Helen Mirren; the wife of a shady crime lord finds comfort in the affair she begins with a regular patron of their restaurant. However, when her lover is unsurprisingly killed she asks for the cook’s help in exacting her revenge.

In the overly dramatic final scene, she forces her husband at gunpoint to eat a bite of the exceptionally cooked corpse and unhesitatingly shoots him right after. The whole film has an almost operatic quality to it, the performances delivered are purposely extravagant and do not resemble real people but it has its own character and is beautifully shot at the same time.

A known to everybody, referenced countless times in pop culture, benchmark of a horror film needs no introduction. It checks all the necessary boxes to be legendary in its category: made for a miniscule budget, spawned a successful franchise and essentially created many of today’s horror movie clichés.

The infamous “dinner” scene towards the end of the movie proved to be the peak of its frightening moments. The character of young, beautiful Sally is tied to a chair and accompanied by possibly the worst dinner company ever, a family of cannibalistic murderers.

She screams a lot, as expected, while they cut her finger and are determined to have their relic of a grandfather to whack her in the head with a hammer. They fail laughably and horror is intertwined with comedy, as is wont to happen. Sally escapes, Leatherface hunts her down with a chainsaw, she manages to get on a passing by car and escapes laughing maniacally.

It is worth to be mentioned that the dinner scene was shot for 36 consecutive hours, in the scorching heat of Texas summer, because the actor playing the old man did not want to go through the makeup process again.

There were no fans in the room so food and carcasses were rotting away and people were sweating profusely during all this time. One actor said that it was easily the worst experience of his life, even than serving in Vietnam. Suddenly, the agonizing screams of Sally gain a whole new meaning.

The unforgettable menu on this classic scene is etched into the memory of everybody who watched it, be they children or adults. Whether you have a craving for snake surprise, eye soup or chilled monkey brains, you can watch Indian people merrily wolfing down everything and Kate Capshaw being genuinely nauseous and appropriately squeamish (even fainting at the end). Simultaneously, Indy discusses the Thugee cult and seems rather unfazed by the ghastly food that slithers everywhere.

This scene may seem kind of dated now and was originally devised just to keep the audience’s attention during the whole uninteresting evil cult discussion. After all, when someone is watching an Indiana Jones flick, they are way more invested in the action filled hunt for lost, ancient artifacts than anything else. 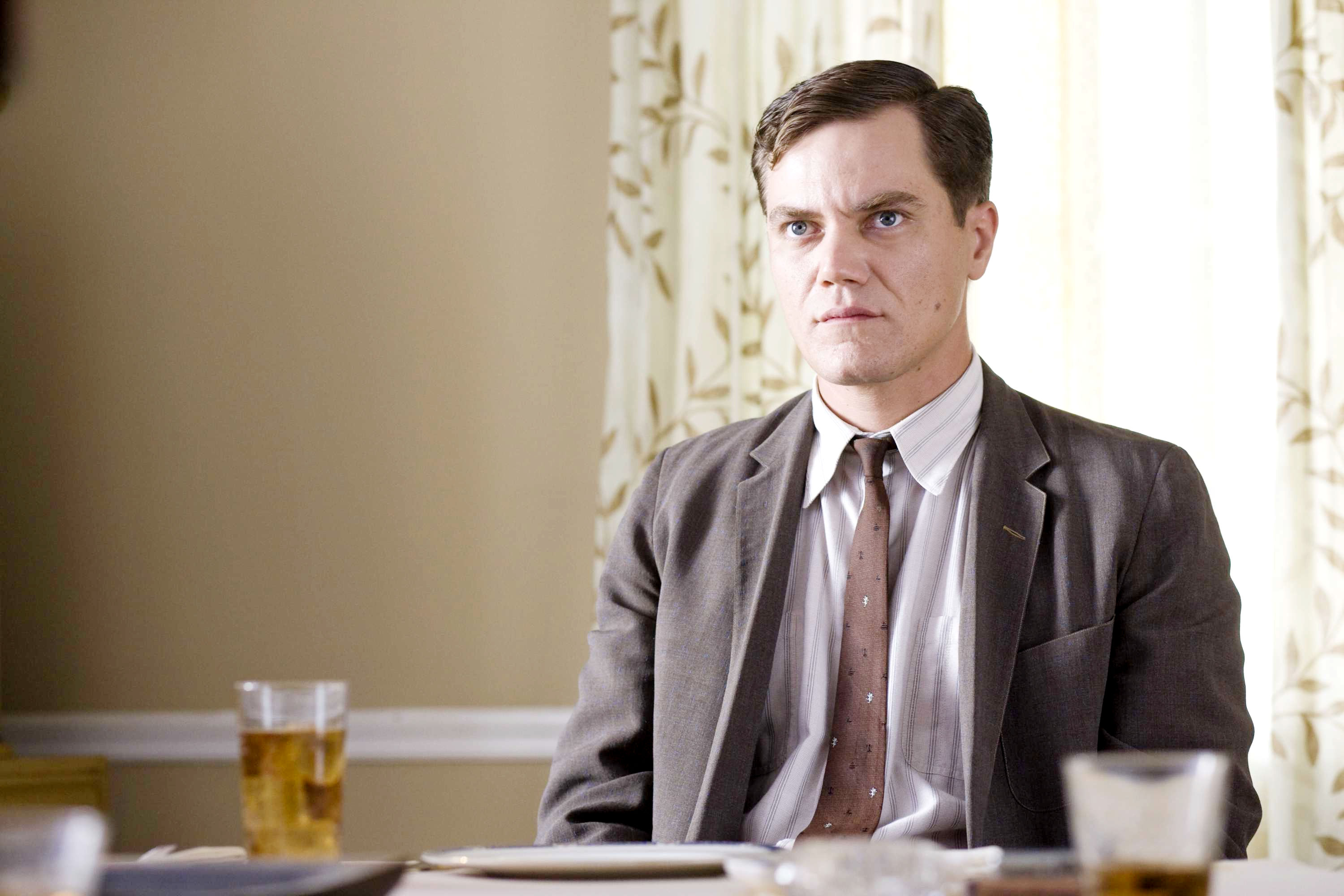 The 2008 Sam Mendes film is an adaptation of the novel by Richard Yates with the same name. Starring the beloved duo of Leonardo DiCaprio and Kate Winslet, as well as an excellent supporting cast (including Kathy Bates), it is no wonder that the film received critical acclaim and 3 Academy Award nominations.

Revolutionary Road tells the tale of a young, seemigly perfect couple that has made a neat little life for themselves and their young children in suburban Connecticut. However, they are unhappy as they find no meaning in their daily routine and his mundane job so they decide to move to Paris. Everything starts to go sideways when unexpected complications and the temptation of compromise get in the way, leading to a tragic finale.

The scene in question deals with a turning point for the plot; the moment they first announce, thus making it real, their change of plans to some friends. The middle-aged couple have a positive reaction, congratulating them on April’s pregnancy. Their son, though, a mentally unstable man that represents in a sense the protagonists’ conscience and “that little voice” inside their heads that they ignore, takes very badly to this news and lashes out against the both of them.

DiCaprio’s character is angered and fights back, proving that the other man has hit a nerve, while Winslet’s April sits there apathetically and does not utter one word for the entirety of the scene.

The stellar performances and eloquent script combine to make a scene that brilliantly fits the rest of the movie, one that deals with important subjects and life decisions with subtlety and without unnecessary ornamentation. 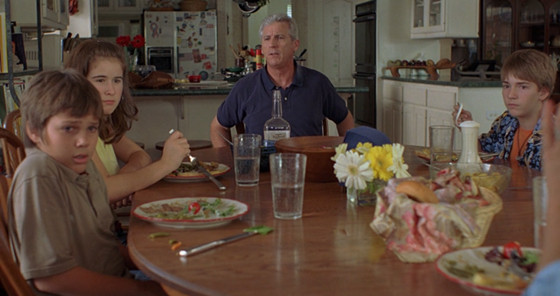 Boyhood is one of acclaimed director Richard Linklater’s most recent works. At the same time, it is not recent at all since he began shooting 12 years before its release date. The film received multiple Academy Award nominations and one win for Patricia Arquette’s performance.

One might argue that the scene included here is not as memorable as some of the others and it kind of blends in with a background of standard family moments. However, its strength and its success to fill something ordinary with tension and the sense of dread is undeniable, equally thanks to the actors and the director.

A dinner with the young protagonist’s family takes a turn for the worse after his alcoholic stepfather lashes out at him over some insignificant offense and hurls a glass almost at his face. There is no actual violence, there is no bodily harm, no generic, caricature depiction of the father. It is just such a relatable, sad and troubling scene in a beautiful, highly realistic film. 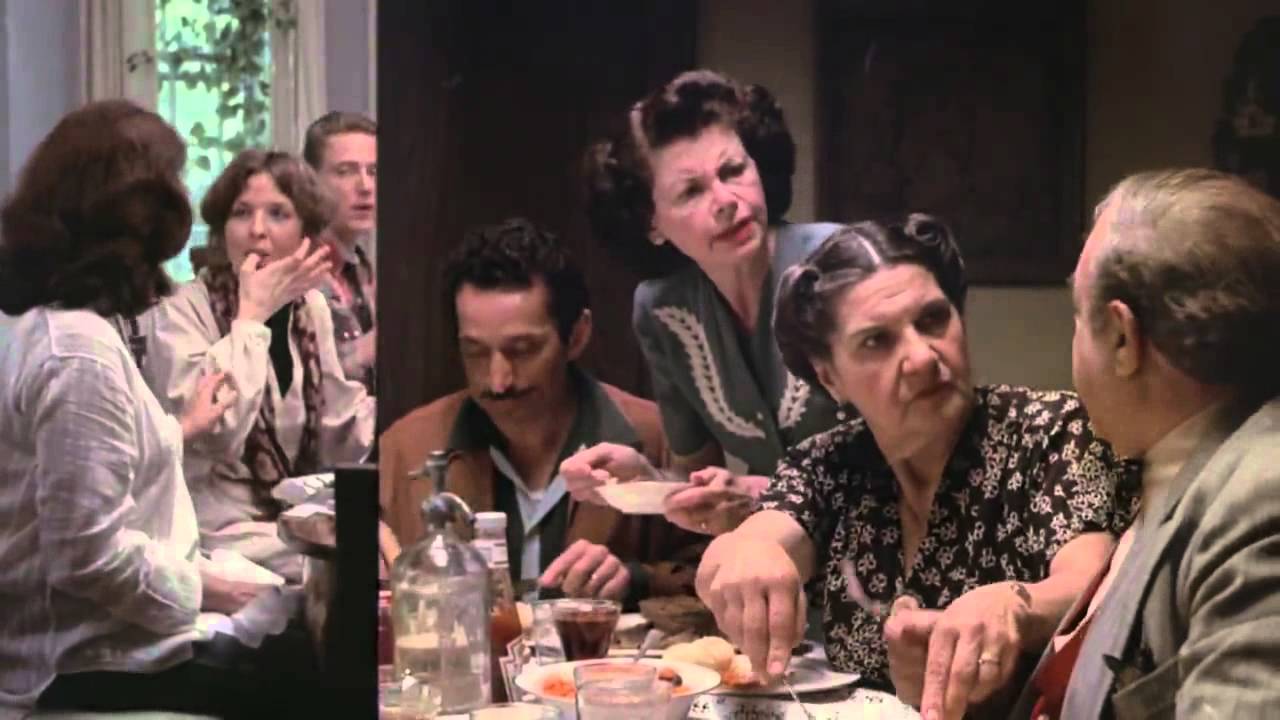 Whether you belong to Woody Allen’s admirers or not, you have got to hand it to him; he is definitely one for playful social commentary and making the occasional awkward material into humour. In some films more than others in his long filmography, he does so with greater success.

Such is the case in Annie Hall, one of his most lauded endeavours. The nightmarishly awkward Easter dinner with Annie’s family calls for a 4th-wall-breaking moment and finds Alvy Singer (Allen) imagining himself as a rabbi under the scrutinizing eyes of the grandmother. He even goes so far as to recall almost nostalgically similar dinners of his own family and how chaotic yet more familiar they felt.

It is quite admirable, in fact, that in this scene Allen’s irritating character manages to make the audience sympathize with his ordeal. 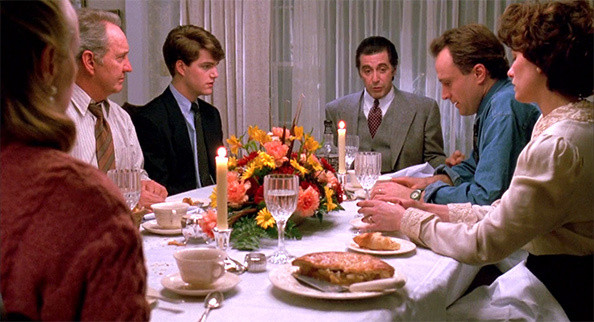 There is a lot that stays with you after watching this film, from the two leads’ top-notch performances to a certain tango dancing scene. The scene in particular that made it to this list, however, was that of a family dinner packed with tension that reveals a lot about Lieutenant Colonel Frank Slade’s background.

Pacino’s character (Slade) is a blind, aging man that constantly provokes others so as to prevent their pitying him for his condition. O’Donnell’s shy, timid Charlie Simms is a prep school student whose job is to accompany Slade while managing to deal with his difficult character.

Slade’s cantankerous personality is already known to the viewer by the time this scene is reached, so there is no surprise when he keeps taunting his nephew past his breaking point. What we do learn, though, is how this man came to be so bitter, hating everyone else not nearly as much as himself, maintaining his bravado as a coping mechanism.

At the same time, we see him sad and fragile as he makes zero effort to defend himself from his enraged nephew’s accusations, all in front of a shocked Charlie. The only thing that triggers him is when Charlie is taunted and then nephew Randy finally gets what was coming to him.