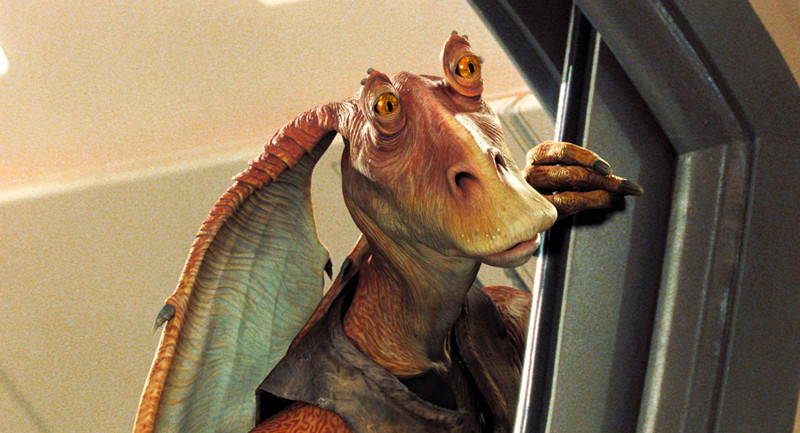 So there you are, watching and enjoying your movie, and a supporting character shows up that makes you sit up and think: “well dang – that was pretty annoying. Then it happens again. And again. With the same character. Pretty soon all you’re thinking about the movie is how annoying that man/woman/Rastafarian-Gungan is, and not about the movie.

Some annoying characters are, to paraphrase Jessica Rabbit, not really bad, they’re drawn that way. The movie needs them to be annoying, so they can move the story along. Or add color. Or even help make us look forward to their demise. There are others though, that don’t seem to be intentionally annoying. They whine, they scream, they make you want to slap them into a different time zone. And sometimes they’re actually supposed to be sympathetic.

The following 14 supporting characters are a mix of these intentional and apparently accidental uber-annoying characters. Whether intended or not, they can derail an entire movie. Or at least prompt the use of the fast forward on your remote control.

Yes, he was written to be annoying, and he annoys his fellow characters even more often than he annoys the audience, but plopping a fussy, prissy protocol droid into the middle of a three-generation space opera saga (in fact in all three generations) still manages to work at a whole bunch of levels.

Without going all old-film-school on you, C-3PO is the chorus in the whole mythic thing that George Lucas constructed. Of course, it wound up looking a lot more mythic before the second Star Wars trilogy brought us the demi-god of all things annoying, but we’ll get to that later in the list.

For PBS aficionados, C-3PO is what would have happened had Downton Abbey’s Mr. Carter been played by Don Knotts in a metal suit that didn’t quite fit. You’ve got to be special on this list when when even though most of your scenes are with a trash-can lookalike robot that only whistles, pops and whirrs, you’re still the annoying one.

13. Lina Lamont – Singin’ in the Rain – Played by Jean Hagen

Another character who was obviously written to be annoying, and on top of that, is the antagonist, too. Lina Lamont is a silent film star who, at the peak of her career, runs smack into the start of “talking pictures.” The problem is that our leading lady has a voice that makes Gilbert Gottfried sound like James Earl Jones.

This opens the way for lots of intrigue (well, Gene Kelly musical kind of intrigue anyways). It also opens the way for Ms. Lamont to make this list. Yes, we chuckle at the irony of her occupation as an actress, and the fact that she has no clue her voice is so shrilly annoying, but after two sentences, we involuntarily twitch every time she opens her mouth. Add to that her really undeserved superiority complex, and we don’t have the slightest inclination to forgive her her vocal trespasses.

12. Willie and Short Round (tie) – Indiana Jones and the Temple of Doom – Played by Kate Capshaw and Ke Huy Quan

The Lord moves in mysterious ways. As, apparently, does Steven Spielberg. Fresh off a blockbuster hit in “Raiders of the Lost Ark”, both commercially and critically, and with this hit reviving and sprucing up an entire genre that he basically had to himself, he surveyed his kingdom, and saw that it was good.

And how to proceed next? What about making a prequel that’s darker in tone. Oh, and we’ll add a wisecracking sardonic kid. Scarier? No worries, the kid will make it more like a roller-coaster ride. But we’ll counter the “kid-feel” by making the kid sound like he’s 10 years old going on 40. And let’s see, since we can’t get the original, highly successful female lead back, we’ll add a loud, irritating lounge/nightclub singer.

Much has been made of the fact that the actress wound up marrying the man who ultimately cast her, and you can quite possibly make a case for the the actress playing a shrill, loud, obnoxious, spoiled “heroine” so well that the audience secretly (or not so secretly) hopes only Indy makes it out alive.

11. Rachel Farrier – The War of the Worlds – Played by Dakota Fanning 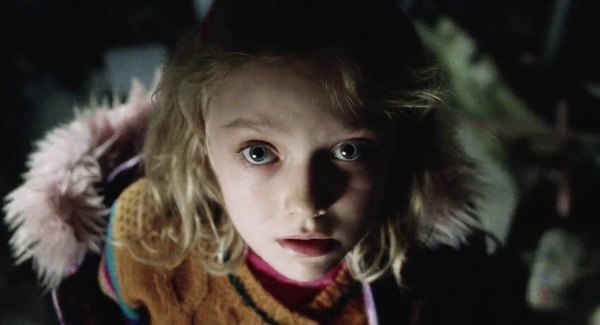 Was there a time in the casting meetings for the remake of War of the Worlds when the director asked the casting staff to figure out a way to make the children auditioning for the role of Rachel Farrier scream and cry? Dakota Fanning is a fine young actress. But it seems as if her ability to panic, scream and yowl may well have been the only criterion for her part.

As the youngest daughter of disaffected lead character Ray Farrier (Tom Cruise), this girl could scream. At least she could at 11 years old (some 10 years ago). And scream. And scream some more. She does pause from time to time, but just to ask a question or two, then scream at the answer. The cute factor works for a bit, but before the end of this movie, you will want to scream too. At Rachel and Ray Farrier. 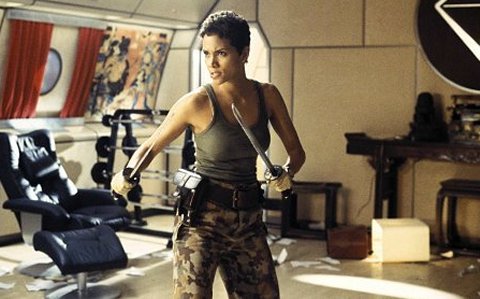 Another character not designed to be annoying, this one is a perfect storm: bad writing, bad (although enthusiastic) execution, and some moments that seemed to be meant as deliberate tributes to past Bond iconic moments. Jinx has a bikini-clad coming-out-of-the-surf shot meant to invoke Ursula Andress, the 1st Bond Girl – now while it’s never a bad idea to have Halle Berry in a bikini, it felt staged and contrived. But it’s her dialog (and delivery of it) that lands her on this list.

When asked by the bad guys who sent her, her defiant answer is: “Yo mama!” Ian Fleming is still spinning in his grave. While Pierce Brosnan was the first Bond to add more of the darkness that Fleming wrote (although without the charisma of the Bond prototype Sean Connery), you get the feeling that even Bond thought that Jinx was annoying. A beautiful face and killer body does not always a Bond girl make. 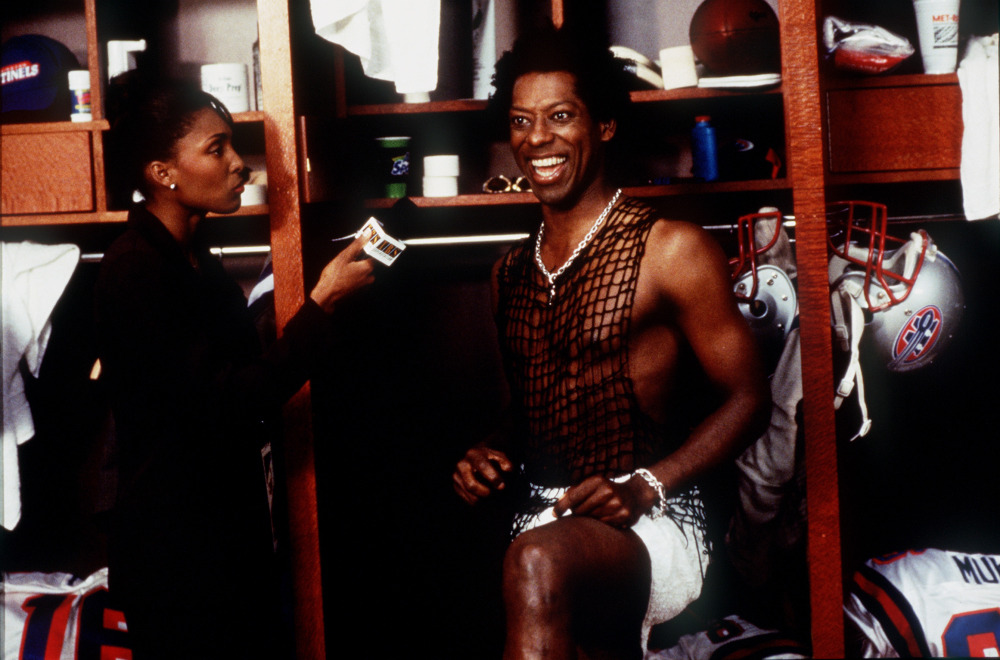 If you didn’t see this movie, no worries, you weren’t alone. While not a money pit, it didn’t wow audiences or critics (it made close at the box office to what it cost). It tried to be the football equivalent to the first “Major League” movie, but decided to do it with endearing strikebreakers.

Clifford Franklin, a blazing-fast wide receiver who can’t catch a pass, is wide-eyed, not exceptionally bright, pretty full of himself, and just annoying enough to be constantly hit, threatened, and demeaned by his own teammates. And the audience has no trouble figuring out why.

8. Mutt Williams – Indiana Jones and the Kingdom of the Crystal Skulls – Played by Shia LaBeouf 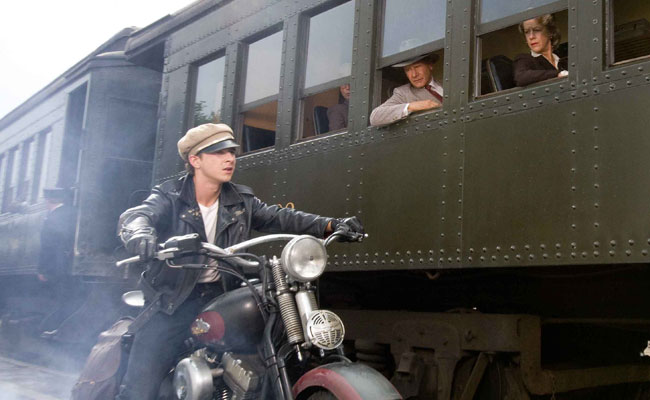 This movie by itself was going to be tricky: Would Indiana Jones almost 20 years later work? With Indiana having a son he didn’t know about? And making that son a young Marlon Brando hood-wannabe? Well, it might have worked fine, if Shia LaBeouf hadn’t played him as a whiny mama’s boy.

Playing most of his scenes with Hollywood veterans like Harrison Ford, Cate Blanchett, John Hurt, and Karen Allen was definitely going to be a challenge, and LaBeouf was already being groomed for a predicted big future. Then LaBeouf just imploded, both on and off the screen. The veterans handled the dialogue. Not so much for LaBeouf. Then he went and not-so-subtly badmouthed his director and writers. But the on-screen is what we’re looking at here. And that was annoying enough.