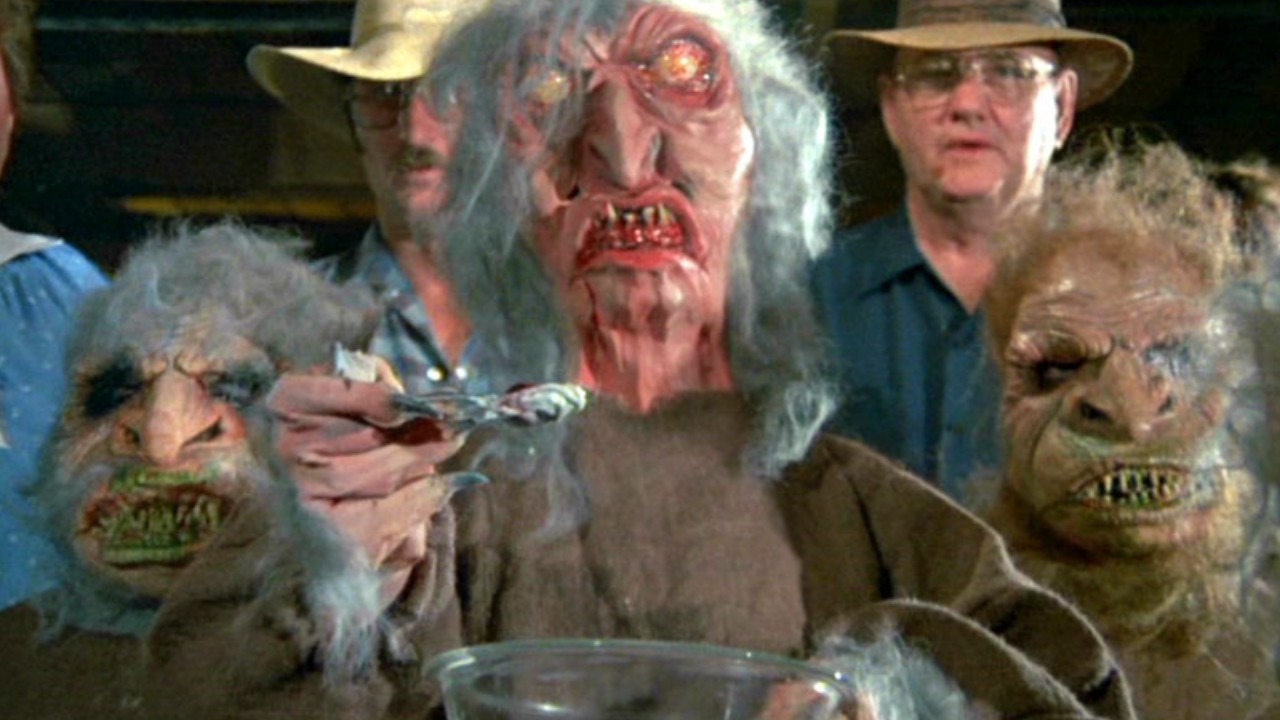 The “Monster-Movie” is practically the backbone of the entire horror genre. Dracula was a monster. Frankenstein was a monster. In fact, the entire genre is based around some “bad” entity that is causing unpleasant times for “good” people. One of the definitions listed in the dictionary for monsters describes them as “any animal or human grotesquely deviating from the normal shape, behavior, or character.” It could really refer to anything…a fish…my cat…your mom.

The Universal Monsters era was responsible for generating the classic “human monsters” we are all familiar with today. After that grew stale, filmmakers began to really use their imaginations and were required to get more creative with their monsters. Considering the dizzying amount of films produced each year, and how really f*cking hard it is to MAKE one, there have naturally been a lot of mixed results.

There have been so many bad movie-monsters that this list could’ve easily stretched to a top 20 and beyond. That being the case, I thought we’d just take a look at 10 of the monsters that really broke the goofy-meter in no particular order (except for #1)

Since these films have such a varying degree of quality, you can refer to the “When To Watch” suggestions at the end of each description to aid the potentially torturous experience. 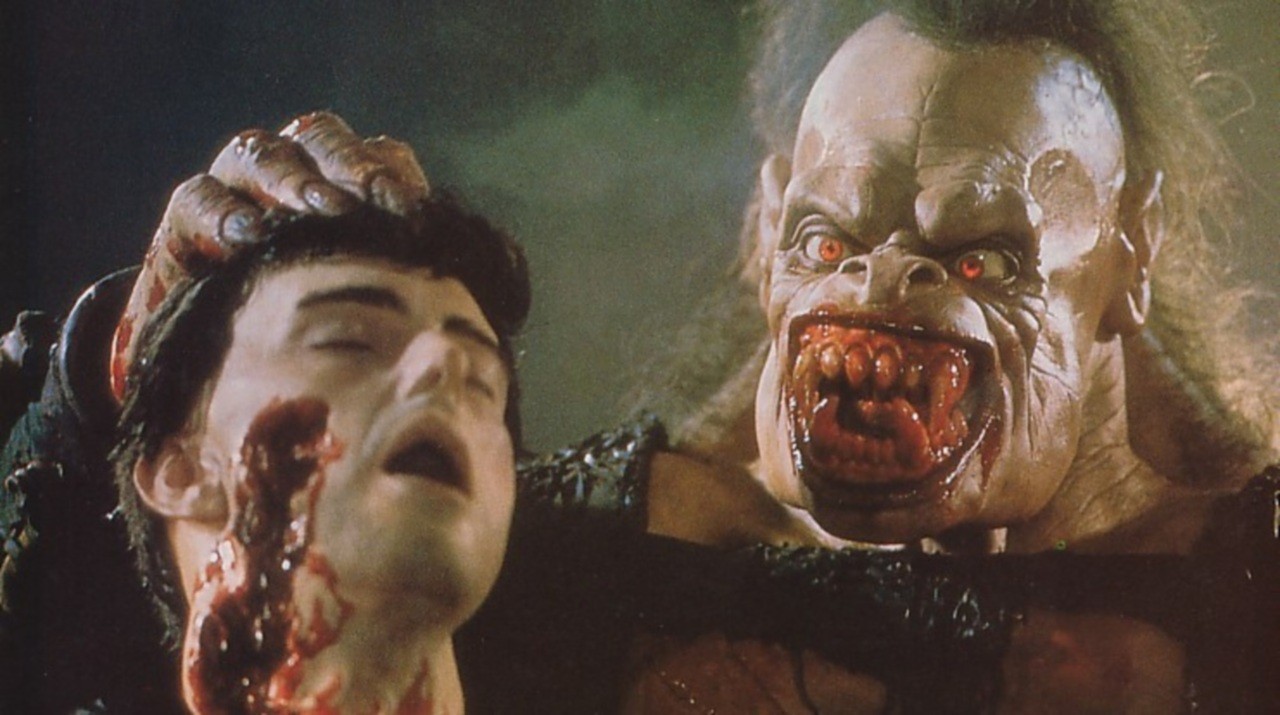 Rawhead Rex is a monster flick based on a typically unnerving short story by Clive Barker. This was actually the second film released based on one of his screenplays (the other being Underworld). After Underworld and this fiasco, he wisely decided to start handling business himself by writing/directing Hellraiser.

Seeing as how this film made the list, Rawhead’s biggest issue is obviously the monster itself. While the film is not TERRIBLE, many parts of it become laughable due to the bizarre creature design. If you were to read Clive Barker’s Books of Blood to a small child and ask him/her to draw their interpretation, this would likely be the result (and you’d also be a bad parent). Rawhead appears to be a professional wrestler wearing a Halloween mask.

It’s unfortunate, because this actually could be a quality film. Maybe someday we’ll actually get a remake of a film that deserves it…don’t hold your breath. 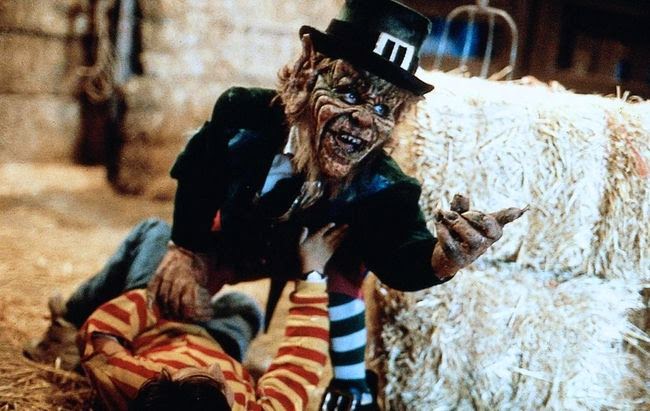 One of the major problems with “mini” monster movies is that we as viewers can’t help but think, “Why can’t you just KICK HIM IN THE FACE AND THROW HIM OUT THE WINDOW?? PROBLEM SOLVED!” These thoughts occur during Leprechaun, only they’re made worse by having a creature that never shuts the hell up. He’s an annoying little s*it that never stops wisecracking.

Despite that, the special effects on actor Warwick Davis as the Leprechaun are actually quite good, and the film is entertaining enough for a look. The biggest issue is that the leprechaun is neither scary nor funny. It becomes an infuriating experience because you just want them to destroy the bastard so he stops talking.

What’s worse is that there have been SEVEN of these films (and probably more to come)! He just won’t go away. Even the ‘hood has had two chances, and they failed to give him a lead sandwich…or whatever people say.

When to watch: When you feel like getting angry AND seeing Jennifer Aniston run around in acid-wash jean shorts. 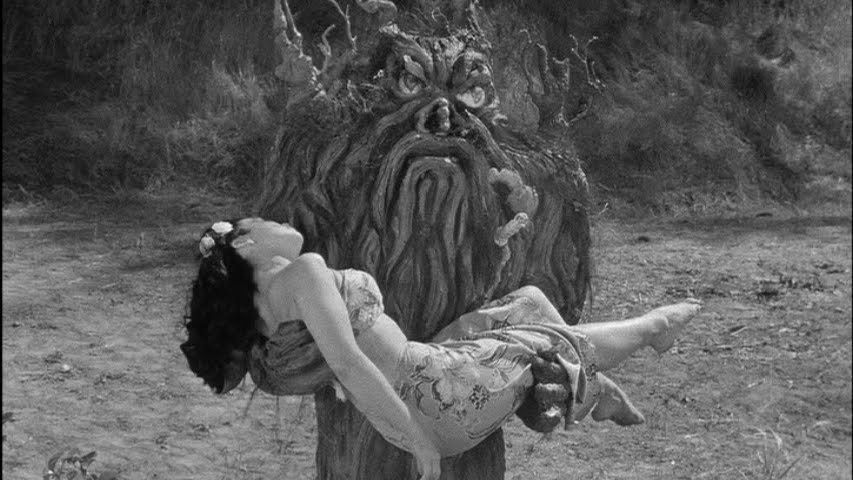 From Hell It Came is the poster-child for 1950’s sci-fi/horror. The plot involves nuclear radiation, a bunch of boring guys in lab-coats, and women in distress. It was the BIG, ATOMIC ERA. What sets it apart from the others is its infamous monster, the Tabanga. The Tabanga is a tree-man (man-tree?) who comes to life due to radiation and goes on a killing spree on a jungle island.

Many films from this era featured similar, formulaic plots, but From Hell It Came really took things to another level by having such a ridiculous creature. Tabanga staggers around the jungle with a frozen grimace on its face, and he could probably be toppled over by a husky 3rd grader. If he fell on his face, he’s finished. Bonfire time.

Also like many sci-fi horror movies of the 50’s, the scenes without the monster are incredibly dry and boring. Those scenes are not the reason people watch these movies, though. We want to see monster action! I wouldn’t say its “action”, but it’s definitely entertaining.

When to watch: Sunday morning after a rough night involving Irish car bombs.

When people refer to the scary aspects of the story of Pinocchio, they normally mention the donkey transformation scene from the original 1940 film. Actually, if you go WAY back, things get much worse. The originally story described Pinocchio as being an obnoxious “wretched boy” and ended with him being LYNCHED by a fox and a cat.
You know, for kids.

Anyways, we’re talking about Pinocchio’s Revenge, the cheeseball 1996 B-movie. By this time, filmmakers had really figured out that ANYTHING can be turned into a monster movie. That meant it was time for one of the least menacing characters from literary history to become a demonic entity.

Pinocchio’s Revenge is certainly watchable and adequately directed (Kevin Tenney, Night of the Demons), but again, it’s not scary. Come to think of it, Pinocchio is technically a tree-man…just like the Tabanga! So the point is, tree-men are just not scary? It’s hard to imagine that it was ever intended to be truly frightening though, so it’s worth a look for easy entertainment.

When to watch: With friends, popcorn, and Irish car bombs (followed the next morning with From Hell It Came) 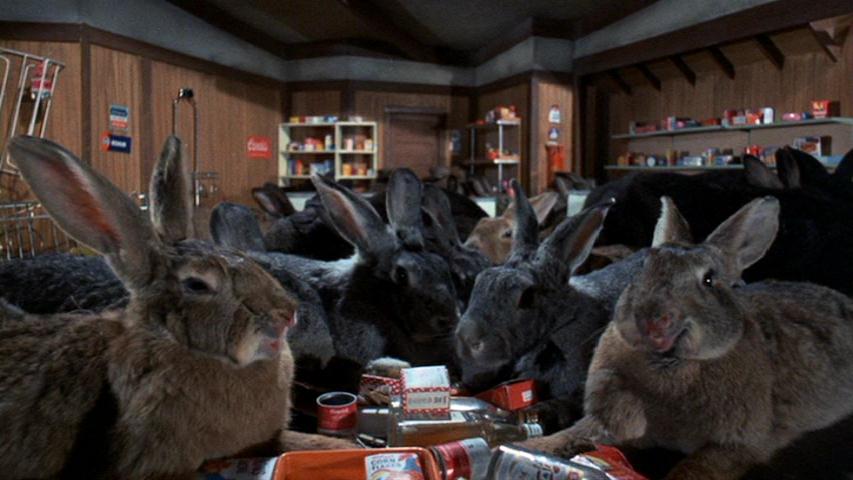 By this time there had been movies with giant killer ants, grasshoppers, women…just about everything. At one point around 1972, somebody announced,”Ya know what?….f*ck it. Bunnies”.

Yes, Night of The Lepus is a film about a small Arizona town that is overrun by thousand of giant, mutated rabbits. Actually, “mutated” is a loose term, because at first glance they are nothing more than normal, everyday giant bunnies…with a thirst for blood.

The special effects are shot using miniature sets to give the forced perspective of gigantism. For the more complicated scenes, they even used actors in rabbit suits. It’s truly a sight to behold.

Night of The Lepus would have a higher cult-status if the film weren’t so dull. It suffers the same fate as the aforementioned From Hell it Came. When we’re not treated to seeing huge, roaring bunnies trampling over model train sets, were stuck watching bland people spout awkward dialogue at each other. Honestly, you can just watch clips on Youtube and get the gist.

When to watch: When you’re bored and feel like Youtube-ing (many clips are available)