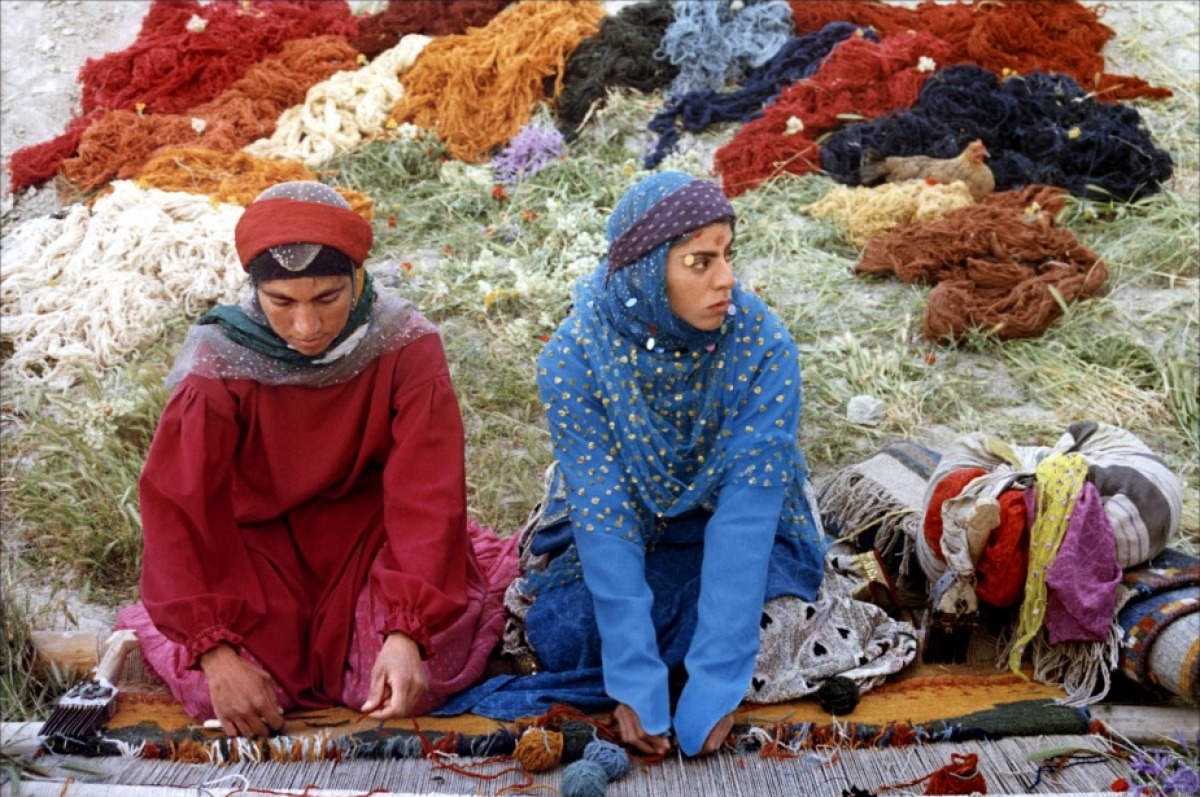 One of the stranger entries on this list, Gabbeh focuses on an elderly couple who carry their antique rug (‘gabbeh’) to a river in order to wash it. When the rug is spread on the ground, a young girl, also referred to as ‘Gabbeh’, magically appears from it. The film then shifts focus to the girl as the story relates her life to the audience: her uncle who is hoping to find a bride, and the man she longs to marry.

Award-winning cinematographer Mahmoud Kalari has worked on more than sixty-five films during his career, many of them critically and internationally acclaimed. Despite its unusual story, Gabbeh bears many of the traits present in his other films, among them A Separation, The Pear Tree and Leila: artistic framing, vivid colours and rich detail in the costumes and landscape. These supplement Gabbeh’s own narration to allow the film an almost mythical aesthetic.

Kalari succeeds in capturing the beauty and colour of the film’s primarily rural setting, focusing on elements of the natural world – a tree, a cloud, a leaf – and their relation to the characters. In the interplay between sunlight and silhouette, familiar images are given an otherworldly quality, like Gabbeh herself, and attest to hidden realms, hidden layers of meaning, in the character’s autobiographical articulations.

An exquisite visual smorgasbord, Gabbeh’s fantastical inclinations are well-served in Kalari’s cinematic hands, creating a storybook portrait of Mohsen Makhmalbaf’s idyllically-realised world, one that is both grounded and prone to flights of fancy – a fairytale imagining of a modern domestic drama, in which the traditional mixes with the contemporary in a unique and extraordinary way. Captivating and resonant. 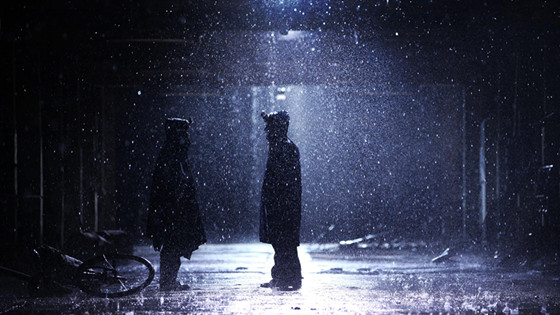 Portrayals of war are ubiquitious in Iranian cinema, but what sets Ahangar’s film apart from the crowd is its attention to the smaller aspects of warfare. Set during the Iran-Iraq conflict, this film examines what it means to take the righteous path. Intrepid scout Siavash makes it his mission to reveal geographical coordinates of the Iraqi side, in the hope of gaining an advantage over the enemy.

However, when he encounters the soul of a diseased scout who worked on the same task, Siavash becomes conflicted as he questions the morals of killing innocents simply because they have been labelled the enemy. Siavash’s war is just as much within himself as it is all around him.

In portraying the harsh realities of war, the film sets out to be striking in its mise en scène rather than beautiful. Missiles exploding over water in the opening sequence cast vast plumes of foam across the sky.

A recently slaughtered cow’s head is dragged at high speed along a dirt track in gruesome close up. In scenes along the waterfront, the dull khaki uniforms worn by Siavash and his comrades contrast sharply with the sun-spackled sea in the background.

A scene in which Siavash tenderly shows a local child how to tie a line around a honeybee is shot in intricate close-up. “If the Queen dies, all the other bees will die,” he says, perhaps an allusion to the significance of strong leadership.

The Queen’s Director of Photography, Alireza Zarrindast, renowned for his innovation in the creation of cinematographic equipment, has also worked on Close-Up (1990), Pari (1994), and Child of the Earth (2008), in which he demonstrated an ability to convey the tragedy of war with slow, lingering shots. As The Queen demonstrates, Zarrindast has retained his skills in creating atmosphere through his cinematography. 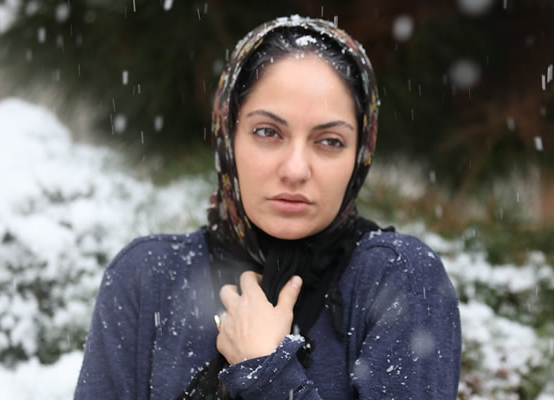 Peyman Moaadi is best known for his acting roles, most notably in the Academy Award-winning A Separation, and more recently, in the U.S. picture Camp X-Ray. However, this film marks his foray into new territory in his directorial debut. Shot entirely in black and white, the film focuses on the life of Roya Raminfar, a piano tutor, and her reaction to a shocking revelation.

Roya’s existence is idyllic; financially independent, she receives her students at her attractive apartment complex, where she teaches scales and sonatas. Her husband Ali, who makes a living as a dentist, is kind and attentive. On the surface, everything seems fine. However, when she finds out her student Nasim is having an affair with Ali, Roya struggles to process the information.

As she comes to terms with the truth behind her husband’s business trips and her marriage, Roya also begins a close friendship with her neighbor (played by a mischievous Saber Abar), and as they spend more time together, the pair form a definite bond. This raises a new question – what does it mean to be unfaithful in a relationship? Can infidelity occur with the absence of physical contact?

Moaadi demonstrates a talent for depicting the subtleties of human relationships, and his camera picks up the minutiae of everyday life, whether through a phone number scribbled on a music sheet, or the hopeful glance Roya gives the window in the hopes of spotting her new companion. When she and her neighbor attend a local meeting, the intimacy they share is evident in their surreptitious giggles and coy smiles.

Despite its monochrome cinematography, the film’s hues are rich and earthy. Soft focused shots give a sense of serenity in early scenes of Roya’s contentment, but later signify her own lack of ability to concentrate on her daily tasks as she deliberates how to handle her situation.

When she meets with Nasim’s jealous partner Parham, who tells all he knows about the affair, the film takes on noirish tones, his face cast in shadow as he and Roya compare notes on their partners on clandestine street corners.

A deeply internal study of how one woman copes with her marital crisis, The Snow on the Pines plants Moaadi firmly amongst Iran’s talented social realist directors. The film’s black and white nature serves as a juxtaposition to the characters’ marriages, which are anything but clearly defined.

9. The Day Goes and The Night Comes (Omid Bonakdar and Keyvan Ali-Mohammadi, 2011) 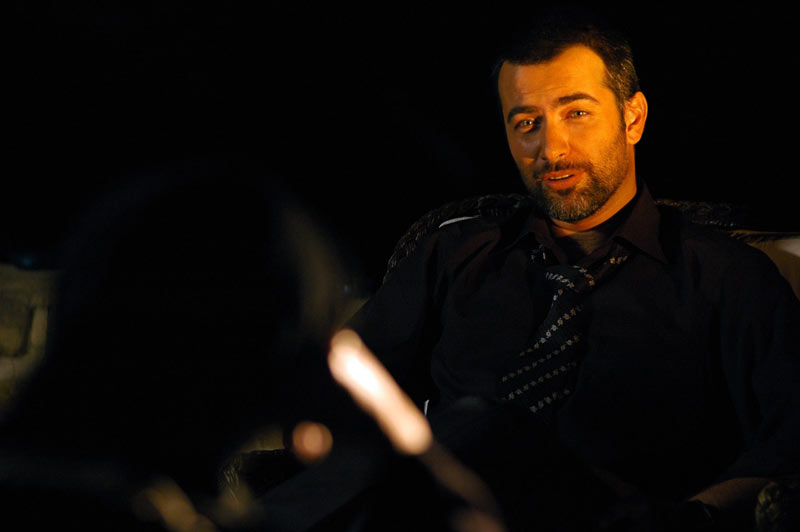 An intricately woven film, this joint work from Omid Bonakdar and Keyvan Ali-Mohammadi is a sumptuous visual feast that connects the lives of several women each striving for happiness.

We first focus on Fouzhan, a practical woman who is due to marry her doting cousin Farzad. At first, she seems contented in her world, until she realizes that a mobile phone has found its way into her bag while she was out shopping with friends. When she returns the phone to its mysterious owner, she is smitten.

This brings forth a dilemma – is there such thing as destiny when it comes to matters of the heart, or should she follow her duties? We are also introduced to Marjan, a young woman who has been abandoned by her husband.

When he returns to beg forgiveness, she must make a decision about how to proceed. In another storyline, the painter Siavash and his faithful wife Bahar contemplate their marriage, while a depressed royal daughter laments the sadness of her family life with her only confidante, her art tutor Soleyman. Such an eclectic mix of narratives provides a refreshing variety of outlooks in the way women conduct their lives.

The differences in the film’s storylines are also reflected in its visual elements. Fouzhan’s developing romantic complications are captured in a mostly contemporary Iran, with images of shopping malls and cosy cafes reflecting themes of traditional marriage values versus falling in love organically.  Marjan and her husband come to terms with each other in a sensual, dark, setting, their faces almost obscured in shadows cast by sultry candlelight.

In this film, shadow seems to represent secrets as well as hidden desire. Siavash and Bahar’s scenes, meanwhile, feature warm tones and coffee hues, signifying the comfort and familiarity the pair find in one another. Perhaps the most striking scenes in the film, however, are those featuring the Tajol-Soltaneh and her teacher.

Initially shrouded in darkness, the only light comes from the shimmering tiles and chandeliers in their cavernous palace environment, like blue gemstones on black velvet. Later scenes take on sepia tones that give the film a timeless quality, much like flicking through a scrapbook of old photographs. In this way, the film conjures up images of ancient Persia, a mystical world of hidden jewels, magnificent palaces, and poetic artistry.

An eerily beautiful, fragmented piece of work, The Day Goes and the Night Comes is as intriguing as it is atmospheric. 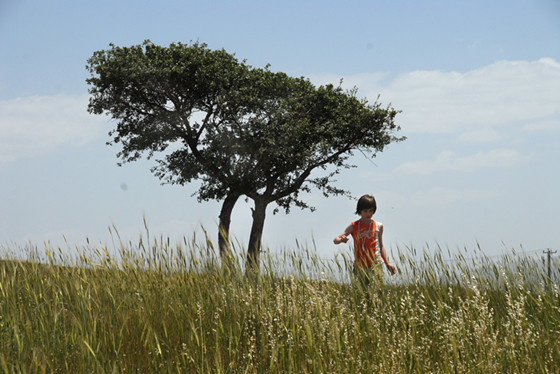 A relative newcomer to the cinematic field, director Morteza Farshbaf shows off his flair for visuals with his first feature film. A story of compassion and overcoming the limits of emotional and physical disability, the film has been included in festivals around the world.

When a quarrel breaks out between a couple in the early hours of the morning while visiting relatives, they drive off into the darkness, neglecting to take their young son Arshia behind in the process. The mother’s sister Sharareh and her husband Kamran, who are both deaf, find themselves tasked with deciding what to do with Arshia.

Things take a darker turn in the morning when Sharareh and Kamran receive some terrible news about the fate of Arshia’s parents. Reeling in shock, they begin the long drive to Tehran to face up to the consequences of the disaster, taking Arshia with them. As the trio progress on their road trip, the couple deliberate how best to break the devastating news to Arshia.

What makes Mourning unique is its reliance on visuals not just to convey the unfolding narrative, but to portray conversation between the protagonists. As Kamran and Sharareh bicker, Arshia, unable to understand their sign language, is oblivious to the enormity of his new situation.

In this way, Farshbaf lets the audience in on the couple’s private conversation, and we conspire along with them. When a rainstorm threatens to obscure our view of Sharareh and Kamran through the windscreen, we feel anxiety that we will be just as excluded as Arshia, unable to make out their conversation through thick sheets of rain.

Farshbaf, who took workshops under legendary filmmaker Abbas Kiarostami’s tutelage, offers nods to the great director’s work through his use of long shots of the car as it navigates its way through the vast Iranian landscape. The car becomes a solitary, miniscule figure; the passengers and their trivial squabbling are altogether insignificant in comparison to their dire situation.

When Arshia takes advantage of a rest stop, he is almost hidden by tall grasses more reminiscent of African plains than Iran’s roadsides. This is a young boy out of his depth, forced into unfamiliar territory as he struggles to comprehend the events surrounding him.

A nuanced and often darkly comical take on how people learn to understand those around them and find new ways to interact, Mourning sets a new precedent for Iranian filmmakers. Hopefully, we will see more from Farshbaf soon.

Author Bio: Chris Mitchell and Zara Knox are creative writers for IMVBox, the largest online Persian film distribution platform outside of Iran. To see more of her work and watch thousands of Iranian films for free, visit www.imvbox.com.