Downfall offers a unique glimpse into the disturbed and unbalanced mind-set of history’s most infamous despot. The film explores the final days of the Nazi regime in Germany, where Hitler alienates himself from his generals by ranting against imagined threats of treachery within his inner circle, and succumbing to delusions of a Reich that will endure for a thousand years.

While there have been countless representations of Hitler on screen, Swiss actor Bruno Ganz shines above the rest due to his ability to look past the typical traits of a dictator, focusing instead on the fears and anger of a man who is about to lose everything he has ever built. Ganz gives a truly physical performance, utilising volume, facial muscles, erratic movements, and stamina to realistically capture the violent energy that fuelled Hitler’s madness.

Equally impressive is Ganz’s dedication to offering an authentic portrayal of the fascist leader. The actor researched volumes of written material to prepare for the role, and even spent four months listening to recordings of Hitler’s conversations in order to master the dictator’s accent, pacing and tone of voice.

The name Aileen Wuornos will no doubt be relatively unknown to many audiences around the world. However, after one viewing of Charlize Theron’s bone chilling performance in the 2003 film Monster, the name will not be forgotten. Wuornos was an American serial killer who was executed by lethal injection in 2002. Working as a prostitute at the time, Wuornos murdered seven men in the State of Florida whom she later claimed tried to rape her.

Theron is unrecognisable in this role, replacing her beauty and elegance with a frightening combination of deranged stares and violent head jerks. Although audience members will no doubt feel some sympathy for the character – a woman who has been so cruelly beaten by a dark and cynical world – Theron’s monster is still a terrifying sight to behold.

Raging Bull is considered by many to be Scorsese’s masterpiece. It also features Robert De Niro in one of his finest roles. The film follows the rise and fall of former World Middleweight Champion, Jake LaMotta. A vicious fighter in the ring, LaMotta developed a bad reputation as a ‘slugger’ who subjected his opponents to rough beatings. However, it was the athlete’s turbulent life outside the ring that destroyed both his career and his relationship with his family.

De Niro embodies two very different versions of LaMotta: the violent boxer, and the disgraced stand-up comedian. In preparation for the former, De Niro spent hours training in the ring with LaMotta himself, mimicking the fighter’s style and movements. When the time came to prepare for the latter, production was put on hold so that the actor could gain over 27kg (60 lb) to realistically portray the champion’s fall from grace.

But the heart of the performance lies in De Niro’s ability to tap into the fighter’s disturbing aggression – both in and out of the ring – fuelled by sexual jealousy and a self-destructive thirst for victory. The actor wields this aggression and mercilessly unleashes it before the audience in the film’s most terrifying scene: where Jake violently assaults his brother Joey in front of his wife and children.

Both the film and De Niro’s performance were lauded by viewers, including LaMotta.

Astonishingly, there have been very few films depicting the life and career of civil rights leader Dr Martin Luther King Jr. From the momentous marches against racism and discrimination to those four powerful words – “I have a dream” – the civil rights movement in America owes a lot to the guidance and resolution of Dr King.

Unfortunately the man’s legacy has been copyrighted by his family and sold to Hollywood’s chief procurer of history: Steven Spielberg. Many of Dr King’s famous speeches are now owned by Spielberg, thus impacting the production of various projects on the leader’s work, including Ava DuVernay’s Selma.

Despite these obstacles, Selma is a powerful retelling of Dr King’s involvement in the 1965 voting rights protest in Alabama. The film’s success can be attributed to both DuVernay’s skills as a storyteller and the stirring performance of actor David Oyelowo.

Even without those historic words, Oyelowo is still able to embody the sheer force and charisma of Dr King in what is considered to be a flawless portrayal of one of history’s greatest individuals. His lack of an Oscar nomination for this role will be remembered as an appalling oversight. 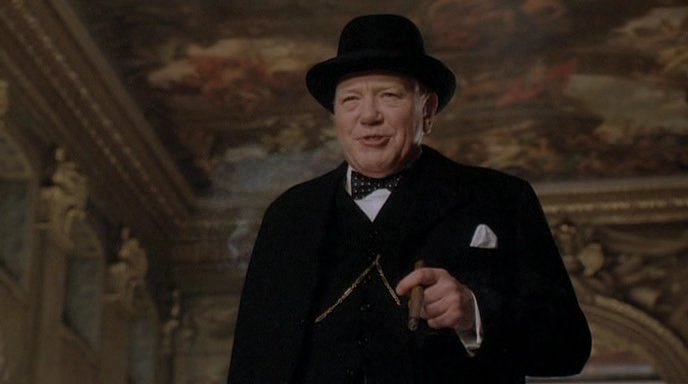 Nazi Germany was on the rise in the 1930s. While most of the world chose to ignore Hitler and his fascist regime, one man stood up in opposition. Winston Churchill was the epitome of resistance and liberty throughout most of the Second World War. His leadership kept Britain afloat during the horrors of the Blitz. His wartime speeches instilled courage and determination into the hearts of the British people.

But before the outbreak of war, Churchill was little more than a frustrated politician, side-lined by his own party. Many refused to listen to his concerns over Germany’s rearmament and aggressive expansion within central Europe. Instead he was simply referred to as a warmonger.

The Gathering Storm tells the story of Churchill’s epic comeback, as he tries to expose Hitler’s true nature to Britain and the rest of the world. Albert Finney gives the performance of lifetime as Britain’s greatest hero, disappearing beneath the character’s surface. The actor exhibits every quirk and characteristic of Churchill to the detail, including: the famous lisp, the gruff temperament, the pensive stare, and the trademark cigar propped in the mouth.

Finney’s portrayal of Churchill has set a high benchmark for other actors, so much so that his name often appears at the top of casting lists for films involving the wartime leader. When offered a small role as Churchill in Quentin Tarantino’s Inglorious Basterds, actor Rod Taylor suggested that the director cast Finney instead.

There you have it, the complete list of the 10 most authentic portrayals of historical figures on screen. Do you agree with this list? Who else do you think should of been mentioned? Feel free to leave a comment.