With eight films so far in his career, it can be said that Wes Anderson has created a world of his own. There are very few directors who are as distinguished in their styles as Anderson is with his own.

Symmetrical shots, nostalgic soundtracks, Bill Murray, and (often) dysfunctional and/or depressed characters in strange plots have become his major trademarks. And while his works may not be everyone’s cup of tea, it can’t be denied that the director has received a heavy cult following, and has created some important figures in the pop culture of recent years.

With that in mind, here we present you the 10 best characters created by the eccentric director.

Voiced by none other than George Clooney himself, Mr. Fox is a red fox who, after surviving a dangerous situation with his wife Felicity (voiced by Meryl Streep), decides to leave the life of a bird thief and become a newspaper columnist.

However, two years after this decision and after finding himself and his family haunted by a group of farmers, he starts to deal with some kind of existential crisis that leads him to become the leader of a group of different haunted animals in order to find a new food source.

We certainly don’t need to explain who George Clooney is. As one of the biggest actors of his generation, he has proven his talents and charisma more than once, often working with high-profile directors like the Coen brothers, Alfonso Cuaron, Steven Soderbergh, and in this case, Wes Anderson. While only doing voice acting, Clooney gives charisma and complexity to Mr. Fox, in a way that we almost feel as though the actor were actually playing the character.

This, along the nostalgic but amazing stop-motion work of the film, makes Mr. Fox one of the most charismatic characters in Anderson’s world, and one of the most complex in the filmography of an actor who’s quite known for his charisma. 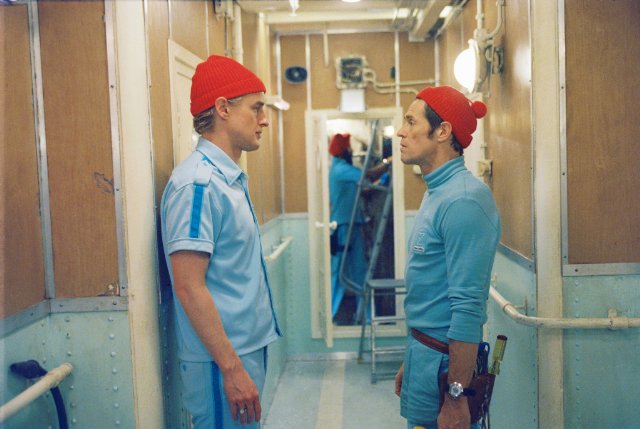 This film may be about Bill Murray’s character Steve Zissou, but if there is one person who steals the show (or at least all the scenes he appears in), it’s Willem Dafoe as Klaus Daimler.

For starters, Dafoe is the kind of actor you mostly see taking roles as serious or dark characters. He has starred in some of the most controversial films from heavy name directors like Martin Scorsese or Oliver Stone, and here he appears as one of Anderson’s most ridiculous characters.

Don’t get me wrong, Klaus certainly is one of the (if not “the”) best elements in the whole film. But it was highly strange to see Dafoe taking on such a role, and that is why it’s so great. Who would have known that Dafoe could be that funny?

Klaus (or “Klausie”, as Zissou calls him) is Steve Zissou’s right hand man. He’s a man who’s completely devoted to his boss and his work, who defends him at all costs, but acts as a jealous child in several times.

He is highly emotional and doesn’t trust Ned Plimpton (Zissou’s possible long-lost son), even when he tries to help their mission. Also, despite the short difference in their ages, he claims to see Zissou as his father.

Strange, ridiculous, and undoubtedly funny, Klaus is easily one of the best comedy elements in Anderson’s filmography.

For many, “The Royal Tenenbaums” is Anderson’s masterpiece (or at least it was before “The Grand Budapest Hotel”). It’s a quirky film that brought Anderson’s unusual style to major audiences (giving him his first Oscar nomination for Best Original Screenplay) and featured one of the best ensemble casts in a comedy.

Each one of them gave a terrific performance and some of his characters became iconic elements of pop culture, such as Royal (Hackman), Margot (Paltrow), and of course, Richie (Luke Wilson).

In a family filled with dysfunctional (and kind of lost) characters, Richie Tenenbaum could certainly be the most tragic. He is a broken man who once was a tennis prodigy, but ended up losing his motivation (and falling into a mental breakdown) once his adopted sister Margot (with whom he is secretly in love) got married.

While he is the only Tenenbaum son that has a good relationship with Royal, the fact that he lied about his health and used him for his own interests, as well as discovering Margot’s secret private life, led him to a very dark situation.

However, while he is one of most affected characters in the entire film, he is also the one who really tries to reunite and be fine with the rest of the family. He works as a balance and support for all the Tenenbaums, always keeping a calm and silent personality.

This combined with Luke Wilson’s terrific performance (it could easily be his best acting work, and one of Anderson’s best collaborations) makes Richie Tenenbaum one of the greatest, most complex, and most tragic characters in Anderson’s filmography.

For even though Richie has some disturbing elements (such as being in love with his adoptive sister), he may be the most touching character of the film.

Working as an homage and parody of Jacques Cousteau and perfectly played by Anderson’s recurrent star, Bill Murray, Steve Zissou is an eccentric (and almost washed-up) oceanographer that starts a quest to find and kill the strange jaguar shark that ate his long time partner, Esteban de Plantier.

This, along with dealing with meeting his possible lost son, having a pregnant reporter around, budget problems, and even some pirate gangs, takes Zissou on some kind of strange personal journey.

As with almost every Wes Anderson character, Zissou is a complex figure that can either be quite charming or quite a bastard, depending on the situation. However, he always tries to reach his gold and be some kind of decent leader for his crew, even when his obsessions take him to terrible situations (such as being attacked by a pirate gang in international waters).

This, plus Murray’s perfect talent for portraying eccentric characters seeking some kind of personal redemption, makes Steve Zissou one of the most iconic characters in both Murray’s and Anderson’s filmographies.

Sam and Suzy. Suzy and Sam. You can’t think of one without thinking of the other (which is why I’m putting them together on this list). While some may say they’re are an alternative young version of Max Fisher and Margot Tenenbaum in the 1960s, both of them have enough elements to deserve a mention of their own.

After a brief meeting during the church’s performance of “Noye’s Fludde”, the young lovers become pen pals for more than a year, when they finally decide to escape together for a couple of days. Both of them are, like every Wes Anderson character, odd and dysfunctional. Sam is an orphaned boy who doesn’t get along with any other person his age (except for Suzy), and Suzy is an introverted girl who loves reading fantasy stories and doesn’t get along at all with her family (nor anybody, actually).

Casting two young and unknown actors, working for the very first time, gave the characters a voice of their own. Both Gilman and Hayward turn themselves into Sam and Suzy, creating an extraordinary, sweet, and charming experience.

Even though the film has big name actors like Bruce Willis, Edward Norton, Frances McDormand and Tilda Swinton (and Anderson regulars Bill Murray and Jason Schwartzman), this young couple really steals the show, creating one of the most iconic couples in recent years.