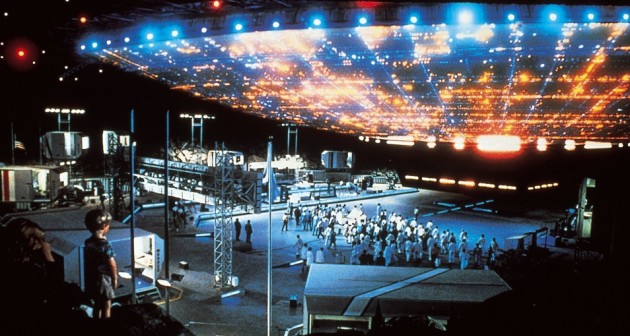 The 1970s brought several sci-fi classics to the big screen. There was Stanley Kubrick’s “2001: A Space Odyssey”, Ridley Scott’s “Alien”,  and of course, George Lucas’ “Star Wars”. However, Spielberg’s shot in the genre came in a very different way.

While the other films explore their plots in space (or in a galaxy far, far away), “Close Encounters of the Third Kind” takes place not only on Earth, but in a small town with regular folks. That had certainly been the concept of sci-fi films in the 1950s (and Spielberg himself has pointed that out as part of his inspiration for the film), but it gave it an interesting twist.

While the 1950’s films used soldiers or police officers as their protagonists, Spielberg takes an simple electrical lineman to drive the film, as he loses his mind after a close encounter.

The film comes with a different concept that feels so natural because of the performances from Richard Dreyfuss and Melinda Dillon, and Spielberg’s direction. It has to be said as well that it’s one of the very few films written by Spielberg himself, and it feels quite personal as well. Because of this (and Williams’ iconic soundtrack), this is undoubtedly one of Spielberg’s greatest classics.

Along with the “Indiana Jones” series, “Jurassic Park” could be Spielberg’s most famous work – and with good reason. Even though it’s an adventure film, it goes beyond that.

Thanks to the work of author Michael Crichton, it explores an interesting thought on the use of scientific advances. While this has been a concept used by several other films, none of them (nor its sequels) explore as smartly as “Jurassic Park” did. It may not be as serious as Spielberg’s other works, but as an adventure film, it features a very smart reflection.

Aside from this, it was a revolution in special effects, it had one of the most iconic soundtracks from John Williams, and it featured quite charismatic performances from Sam Neill, Laura Dern, Richard Attenborough and Jeff Goldblum (how Goldblum and Spielberg haven’t re-teamed in another film is a shame). Without a doubt, “Jurassic Park” deserves to be one of Spielberg’s most famous films.

Featuring Harrison Ford’s most iconic performance, “Raiders of the Lost Ark” was an interesting exercise. First, it came from the mind of none other than George Lucas, and with Spielberg’s desire to create his own James Bond. Even so, there weren’t too many expectations about it. Spielberg himself has expressed that they wanted to make it only for the fun of it, but didn’t have any idea of the success it would create.

The film once again showed Spielberg’s talents to create exciting adventures, as well as Lucas’ great creativity, and John Williams’ ability to bring new and iconic musical scores. However, it can be said that much of the film’s success was because of Ford’s charisma.

Of course, Tom Selleck, the first choice for the role, was a big name at the time and it would have generated interest among audiences. But we can’t honestly imagine any other actor playing Indy the way Ford did. He’s clever, he’s charismatic and he’s a complete badass.

Its success spurred Spielberg to direct three more “Indiana Jones” films (to date, at least). However, “Raiders’” deserves the top mention, as it was a groundbreaking film, as several huge action and adventure films came after its success (some are good and some aren’t). It can be considered one of the most important films in its genre.

The supporting cast, including Karen Allen, Paul Freeman, John Rhys-Davies and Denholm Elliot, help create much of the film’s charm as well.

Spielberg’s third film set during World War II was this epic piece that follows the dangerous mission of a special platoon sent to rescue a young soldier behind enemy lines. Like his previous films on the matter, it features an rough but human look at the war, now focusing on the perspective of a group of soldiers.

It brought with it the first collaboration between Spielberg and Tom Hanks, who gave one of the best performances of his career, along with great supporting parts from Tom Sizemore, Barry Pepper, and Matt Damon in the role of Ryan.

However, what could be the best highlight of the film is the intensity that Spielberg uses to recreate the war, with the help of the fast cinematography from Janusz Kaminski that makes the audience feel like they were there.

Because of this, the film not only received 11 Oscar nominations, but it delivered Spielberg’s second Oscar in the Best Director category. This became one of his most successful works to date.

Starring Liam Neeson in one of the most important roles of his career, as well as Ben Kingsley and Ralph Fiennes, Spielberg’s second take on World War II explores the Holocaust, a subject that is certainly personal to Spielberg and he knew how to represent it. It narrates the story of Oskar Schindler, a German businessman who searched to save the lives of more than 1,000 Polish-Jewish souls.

As Schindler, Neeson gives a performance as complex as the character itself, and Fiennes creates one of the nastiest characters in Spielberg’s filmography. Entirely shot in black and white, Kaminski’s photography helps get more into the environment and feel the tense situation through the film. However, it’s Spielberg’s personal interest on the matter that really makes “Schindler’s List” so great, making the audience really understand the complexity of the situation.

The film gave Spielberg his first Oscar for Best Director, and it also won five more Oscars, including Best Picture. While neither Neeson nor Fiennes received an Oscar for their role, both of them received nominations.

With all of this, it can be said that, at least to date, that “Schindler’s List” is Spielberg’s masterpiece.

Of course, there are several other good films from the director, so we would like to know, what’s your favorite Steven Spielberg film?