Wong Kar-wai’s films have screened all over the world, winning a plethora of awards, including the one for Best Direction at the Cannes Film Festival, which he received twice for “Happy Together” (1997) and “In the Mood for Love” (2000). Currently, he is considered one of the most popular Asian filmmakers and one who can create new trends and styles with his films, inside and outside of cinema.

His universe combines Asian cinematic tradition, French Nouvelle Vague tradition, and the allure of classic American cinema. His aesthetics can be luxuriant while focusing on the smallest of details through pictorial syntheses of extreme elegance. His characters face solitude and unrequited love, Wong’s favorite subjects.

The development and implementation of his style owe much to his regular collaborators, cinematographer Christopher Doyle and production designer William Chang.

Other regular colleagues are writer Jeffrey Lau, producer Jackie Pang, and assistant director Johnnie Kong, with Wong stating, “it is always good to work with a very regular group of people because we know how high we can fly and what are the parameters, and it becomes very enjoyable.” This tendency of his also extends to actors, with Tony Leung, Maggie Cheung, Chang Chen, Leslie Cheung, Jacky Cheung and Carina Lau having participated in at least three of his movies.

Here are 10 of the most distinct scenes in his films.

Tony Leung and Leslie Cheung are tangoing in the middle of a kitchen, with their love and adoration for each other becoming evident by the way they look at and lean on each other. When they stop dancing, they start kissing, hugging and caressing.

Wong Kar-wai places the two of them in the middle of the frame, although the camera is placed a bit away from them, in order to also depict their ragtag surroundings. In this ramshackle kitchen, the sole point of beauty is the two of them, with their chemistry becoming more and more evident as the scene progresses. Their dancing is timed perfectly to the tango song, in a very elaborate combination of image and sound.

The scene also exemplifies the fact that in the foreign land where they are situated, their sole moments of happiness occur when they are together. 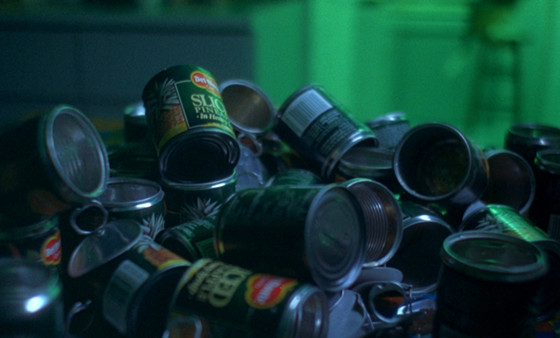 Cop 223 has been rejected by his former girlfriend, May, on April Fool’s Day. Since then, he has been buying one can of pineapple every day with an expiration date of May 1, his birthday, and in an utterly baseless assumption, he believes that if she does not call by the time he has bought 30 cans, their love will expire. In this scenario, he will eat all the cans.

The days pass and on April 30, he visits a supermarket that no longer carries pineapple cans with the specific date, since the attendant has pulled them out due to their expiration date. Cop 223 is frustrated, but is met with mockery and contempt by the attendant, who ends up giving him a basket of expired cans.

The pineapple represents May for Cop 223 and the expiration date the end of their relationship, thus his despair to find a can even on the last day. Wong presents one of his recurring notions through this scene, which is that change is inevitable and unavoidable, and that nothing endures, as Cop 223 decides that everything has an expiration date.

The scene also entails Wong’s subtle sense of humor, as Cop 223 argues about the value of fresh food and the effort it takes to manufacture a can of pineapple. Furthermore, when he sits outside the shop and offers one of the cans to a passerby, he also mocks him and says to keep the expired can for himself.

The two of them are sitting in a room and Li-zhen is eating. She starts asking Mo-wan if he has a mistress, which he denies, but she insists and he eventually reveals the truth. She then slaps him.

One of the most ingenious techniques Wong uses in this film is having his protagonists role play with their spouses and showing their imaginary reactions to possible scenarios. In this case, they play-act how she would react if she confronted her husband and he revealed his affair. The fact that it is not an actual episode is indicated by the slap that does not quite land, and the conversation they have after, with him criticizing her mellow reaction and her admitting that she did not know how to react.

The scene focuses on Maggie Cheung with the camera mostly placed behind Leung’s shoulders, and the same occurs during the brief moment the focus turns to Leung. Thus, the cinematography makes the spectator feel that he is peeking into the scene.

7. Yuddy lies in bed smoking and then gets up and starts dancing in front of the mirror (Days of Being Wild, 1990) 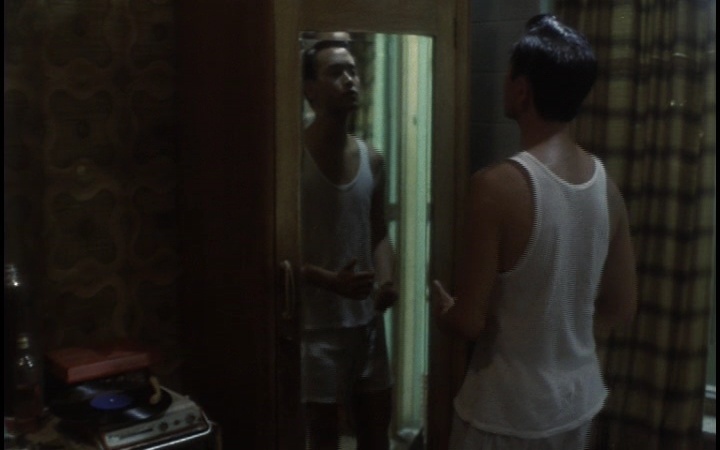 Wong Kar-wai’s first collaboration with Christopher Doyle produced a number of magnificent cinematic scenes, in a film that is largely based on Leslie Cheung’s character, Yuddy. Wong took advantage of his appearance and his ability to portray common characters as conceited stars, frequently placing him in bed, smoking and posturing himself like the star he fashions himself to be.

The most memorable of those scenes comes when, after lying in bed, he gets up and starts swaying to a mambo rhythm, initially in front of the mirror and then in the other rooms.

Doyle presents the scene as if the spectator is secretly peeking into the place, with the camera following Yuddy from a distance, and the framing gradually narrowing as he moves through the house. At the same time, Cheung emits smugness with every move and facial expression. 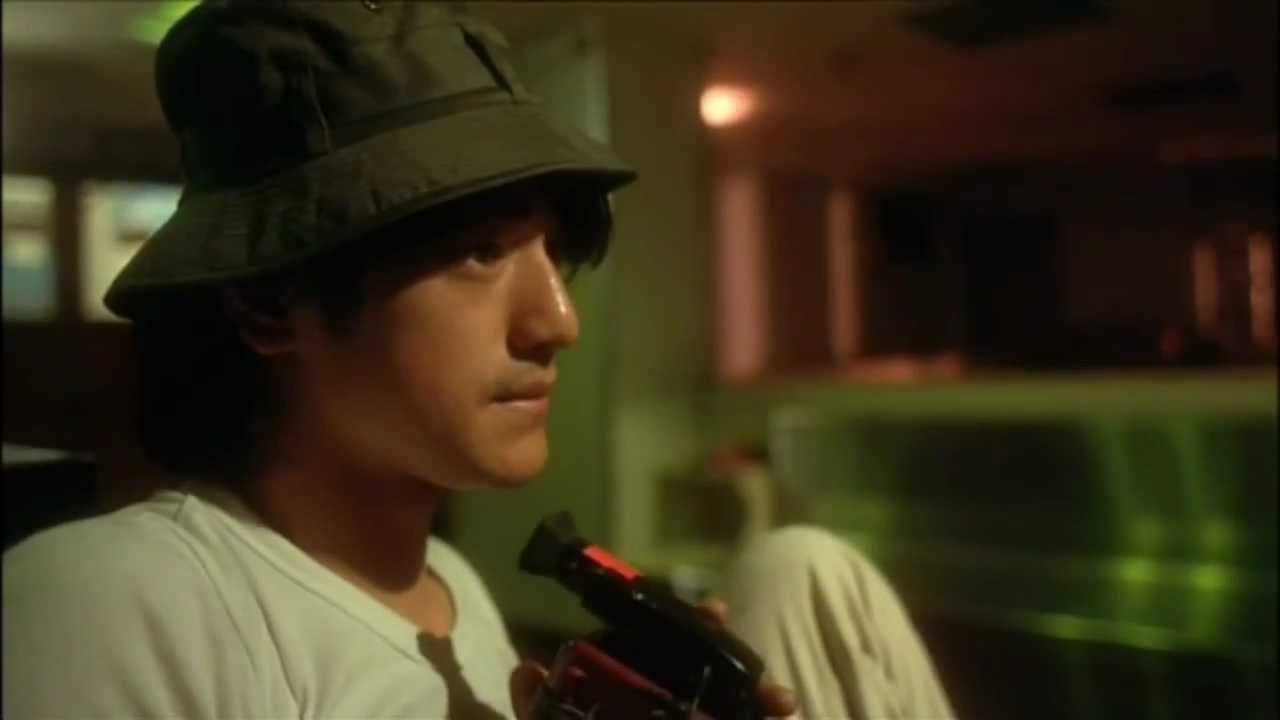 The mute He Zhiwu sits on a bench watching a video of his father. In the beginning, he sits sideways from the TV, but then approaches and sits in front of it. The footage is quite frantic with the camera moving all over the place. His father does not want to be recorded and pushes him away in the beginning, but He Zhiwu insists and even manages to record him while the two of them sleep side by side with his arm over his father.

Eventually, he starts smiling when he records him while he is cooking. Zhiwu thinks he is very happy to watch his father cooking, and although he knows he will never taste his steaks again, he’ll never forget the way they tasted.

Takeshi Kaneshiro as He Zhiwu presents one of the most eccentric characters in Wong’s filmography, but this particular scene is quite sensitive and sad, particularly when he sees his father on the screen and decides to come and sit in front of it. Initially he seems quite perplexed, but eventually he smiles and he seems to enjoy what he is watching, in a clear parallel with his father’s attitude in the video.

In that fashion, the scene exemplifies the complexity of love between father and son. As his father is already dead, the sequence emits an even more tragic sense.