Actors can make or break a movie, whether there are huge star-studded ensemble casts, or just a couple of quality actors who let the script shine for itself. There are not many films that manage to thrive on one actor carrying the entire film alone.

Andy Warhol experimented with the concept in his 1963 anti-film “Sleep”, which consists of 321 minutes of long take footage of a close friend is sleeping for the entirety of the film. A year after in 1964, the Hindi film “Yaadein” directed, produced and solely acted by Sunil Dutt was entered into the Guinness Book of World Records for being the first Indian film with the fewest actors in a narrative film.

The concept of one actor carrying a movie has long been thought to be a stunt, an experiment – just to see how well the actor could act and how good everything else in production must be to counterbalance the lack of characters. However, this idea has become more common and proves that it’s the quality of the actor that counts, not the quantity. 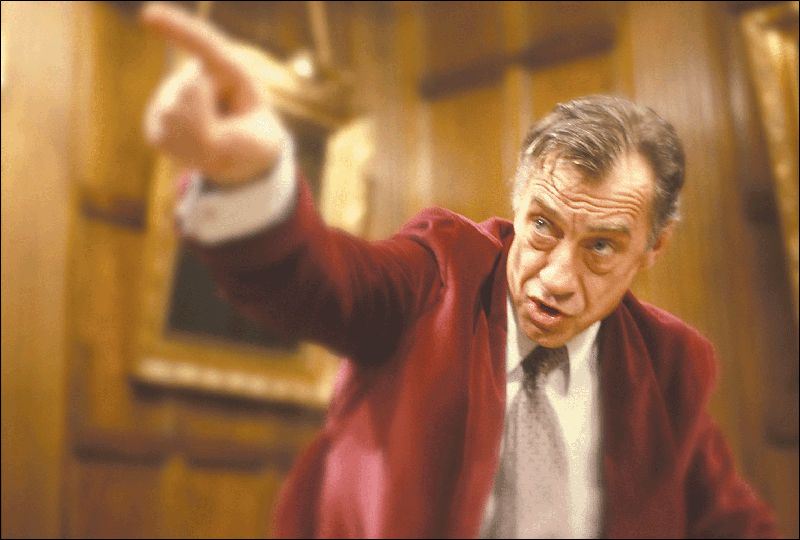 The President monologues his thoughts about his entire career to a tape recorder. He exposes his soul with fierce intensity as he allows his scandalous secrets that have been repressed for too long to pour out of him in rushed, disorganised sentences.

What he says may or may not be true. He makes shocking speculative revelations – Watergate was staged to draw attention away from more serious activities, Marilyn Monroe was murdered by the CIA, and so on. Altman interweaves these theories with official facts and truths from Nixon’s biography.

Baker Hall doesn’t imitate the president, but simply takes on the role of a man who has done so much and cannot handle anymore. While it is warned in the beginning that what has been written is mainly fiction, the question about what is true and what is for dramatic effect is lost behind Baker Hall’s furious steam as he exposes Nixon’s possible emotional turmoil. 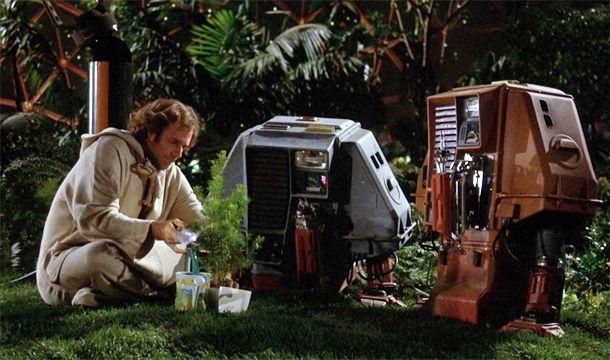 Cult sci-fi post-apocalyptic movie “Silent Running” is set in the not very distant future, when man has completely depleted all of Earth’s sources and there are no growing plants left. Instead, they use interplanetary greenhouses – a couple of lonesome spaceships with a limited crew out around the rings of Saturn, always pointed towards the sun.

Here, plants grow, small animals breathe and Freeman Lowell (Bruce Dern), a greenhouse keeper laments over the dead soil on Earth. He is confused and angry at his crewmates and people in general since they do not understand how important these plants are and how ignorant they have become. One day, the Earth sends them an order – destroy the greenhouses and return – leaving Freeman to calmly take the situation into his own hands and resist.

Like “Cast Away” features a few actors at the beginning of the movie, but soon only Freeman Lowell (Bruce Dern) is left to carry the film. His only companions are Huey, Louie, and Dewey, who are small robots who help with the gardening.

This is one of the earliest examples of a Hollywood feature film that relies on a singular actor in a high-concept situation. The director is Douglas Trumbull, a Canadian who designed many of the special effects for Stanley Kubrick’s “2001: A Space Odyssey”, as well as “The Andromeda Strain”.

Written and directed by Steven Knight, this drama follows construction foreman Ivan Locke (Tom Hardy) as he drops everything and drives to London. Even though he has to supervise a large concrete pour in Birmingham, and his son and wife are currently at home waiting for him to watch an important football match – what awaits for him in London is imminent and hard to explain to the people counting on him.

Locke takes the important decision to take the long and fateful drive to London because a colleague, Bethan, with whom he had a one night stand with seven months before has gone into premature labour – with his kid.

Knowing what it’s like to grow up without a father, he is determined not to repeat what has been done to him – which means he has to tell the truth, reassure Bethan that nothing will go wrong despite the baby being a month premature and ensure that the Birmingham pour goes well and does not screw up his career too.

With the exception of its opening shot, where Locke gets into his BMW, the movie is a one-man show, but is not alone. His situation is slowly exposed through the faceless voices over his speaker phone conversations – and even these voices were strongly cast with the likes of Olivia Colman (Broadchurch, The Night Manager), Ruth Wilson (The Affair, Luther), Andrew Scott (Sherlock), Ben Daniels (House Of Cards, Flesh and Bone) and so on.

Most the film takes place within a BMW X5, which was driven down the M6 motorway on a flatbed truck. Shooting took place in real time, and the filmmakers only took breaks to change the cameras’ memory cards. The self-imposed minimalism of the exposition of his situation conveys the suffocating pressure of confessions and responsibility.

J. C. Chandor’s follow up to his Academy Award nominated debut feature, “Margin Call” is contrasting in theme and style but does not sacrifice quality. While “Margin Call” was had a huge ensemble cast full of fast-paced dialogue and a claustrophobic feel of impending financial doom – “All is Lost” also follows a story in which the character knows his imminent fate. However, Chandor swaps for one legendary actor, a few economised lines and a whole lot of technical ability.

The survival drama follows an unnamed man (Robert Redford) who wakes to find water flooding his boat after a collision with a wayward shipping container. He tries to patch the hole and manages to get rid of the water from the cabin – but the damage has already been done. The boat’s navigational and communications systems have been damaged by saltwater intrusion.

When he climbs the mast to repair an antenna lead, he sees an oncoming tropical storm. There is no great traumatic backstory, no flashbacks to easier times, no nonsense – just cool determination, a strong will to survive and an acceptance to let go. The film score is composed by Edward Sharpe and the Magnetic Zeros’ frontman Alex Ebert. 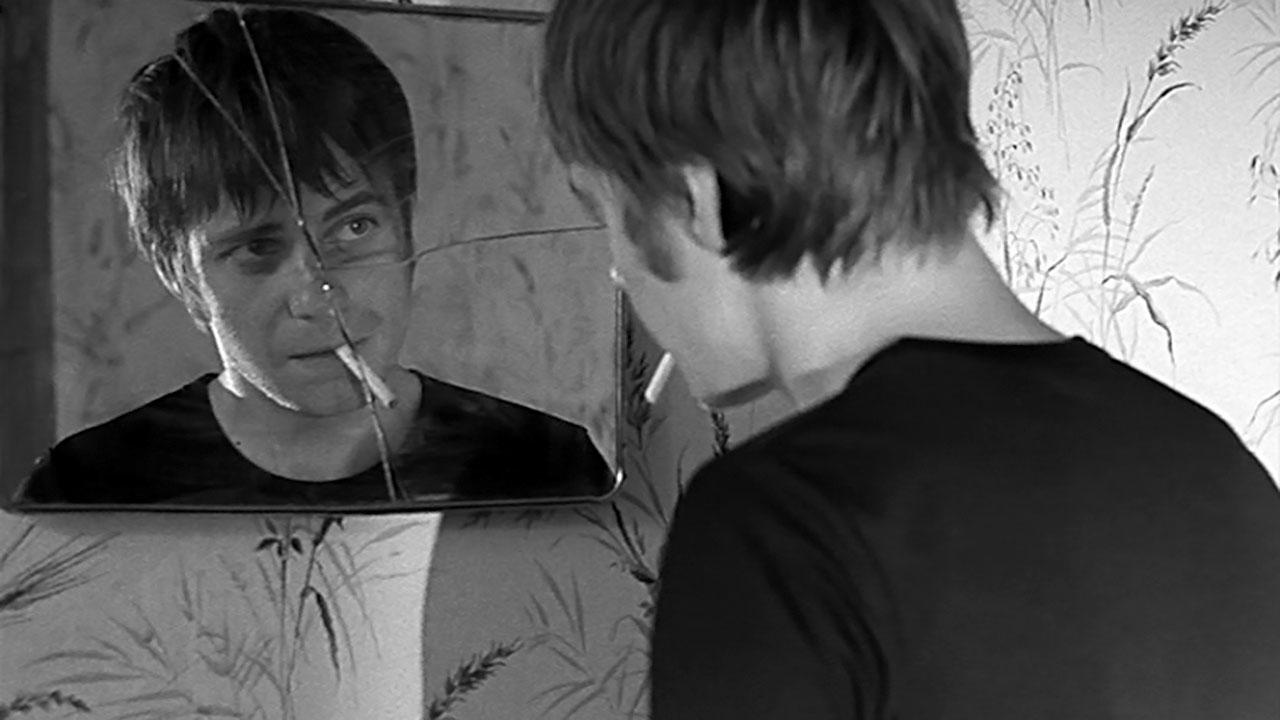 This critically-acclaimed French drama directed by Bernard Queysanne and Georges Perec is based on Perec’s own 1967 novel “A Man Asleep”. The premise is simplistic – probably even more so than the others since not only does it show only one actor – but the single protagonist is silent.

The film follows an alienated young student (Jacques Speisser) who decides to abandon the world he has come to know, and wanders the streets of Paris instead, all whilst a random woman (Ludmila Mikaël) narrates his inner most thoughts. The minimalist cinematography focuses on the protagonist’s daily rituals as the audience follows him in real time to wherever he may wander off to.

The preference for the utilisation of black-and-white rather than colour emphasises Queysanne’s love for overexposure and contrast. Nothing in the film brings attention to itself, so as to make the audience focus on Speisser’s calm voice as she relates the silent man’s thoughts and life.

6266
SHARES
FacebookTwitterSubscribe
Subscribe via Email or RSS Feed
Pages: 1 2
Comments (12)
best movies with only one actor