Actors and their performances are some of the most memorable parts of movies and their presence can often steal the show. For an actor to give a really convincing performance it takes a large amount of concentration and preparedness. In fact, many actors begin to act like their character they are portraying in their real life in order to better understand them.

Because of the immense work that goes into preparing for a role, actors usually like to limit their job to one role per movie, not to mention that films usually require one role per actor. When on the rare occasion that a film does require an actor to play multiple roles, however, it results in a truly special cinematic experience.

There are various situations and purposes for having multiple roles of an actor in a film. Typically it is used as a plot point, such as twins or doppelgangers, where it is necessary to have identical characters. Some other situations include when, usually in comedies, multiple roles are played for gags by the central actor such as the Austin Powers or Nutty Professor films. In any case, whether used for artistic or story-driven purposes, portraying multiple roles comes with many challenges.

For instance, actors have to develop multiple, often conflicting, characters and then act them out in short succession. Filming these scenes can also be tricky as multiple shots need to be taken and then edited together later. The payoff of these effects, however, are typically well worth the effort and the process yields results that would not be possible with multiple actors.

This quirky, metafictional experiment of a film is the brainchild of Charlie Kaufman, one of the most unique screenwriters working today. Based on his own struggles trying to adapt Susan Orlean’s non-fiction book The Orchid Thief, Kaufman interweaves fiction and non-fiction into the depiction of both his life and the lives of the people in The Orchid Thief, creating an entangled, surreal film that comments on the process of Hollywood adaptations and the tendency to stray from the source content.

Nicolas Cage, in his first of two appearances on this list, plays Charlie Kaufman and his, fictional, twin brother Donald. While struck with writer’s block and attempting to adapt Orlean’s book, Charlie’s life is stricken by many other distractions including women troubles and his brother moving in with him.

When Donald suddenly finds success in the writing business, Charlie invites him to help him work on the script. As they dig deeper into the story, however, it becomes clear that Orlean was not telling the whole story and, upon investigating, the brothers discover that she has a terrible secret to hide and that they might soon be in grave danger.

Similar to the productions of many films, as Adaptation plays out, the plot becomes more and more distanced from reality, climaxing in a ridiculous, but typically Hollywood, ending. In this madness, Cage’s performance is surprisingly tame, especially when considering many of his past roles, but his characters are necessary to the structure and cohesiveness of the film. The film also features great performances from Chris Cooper and Meryl Streep, as well as about a dozen cameos of Hollywood stars. 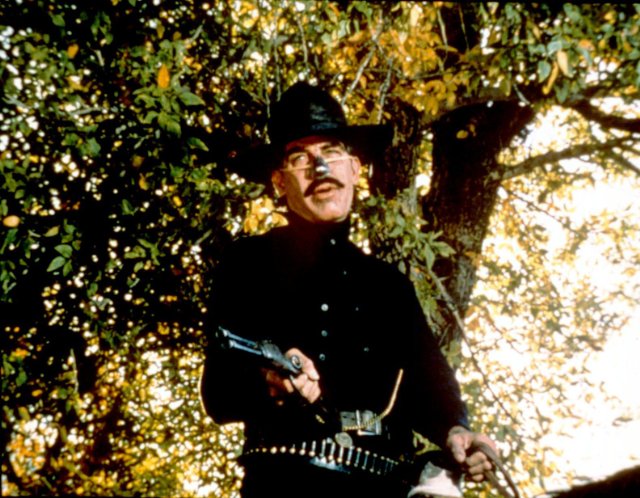 Cat Ballou is one of the strangest mainstream westerns to ever come out of Hollywood. Not only is it a comedy, but it also features musical numbers, over the top action and a magnificent dual role by acting legend Lee Marvin.

Narrated by a chorus of minstrels played by Nat King Cole and Stubby Kaye, the film’s premise is set up telling the story of Cat Ballou, played by Jane Fonda, a schoolteacher whose father’s ranch is under threat of a large company that wants his land. In order to defend her father and interests she enlists the help of two bandits, who she helped escape custody, and hires the legendary gunslinger Kid Shelleen, played by Marvin, to protect against the infamous Tim Strawn, also played by Marvin, who the company hired.

When Shelleen gets there, however, he is a drunken mess and cannot defend against Strawn who ends up killing Cat’s dad. With nothing to lose, Cat goes vows to avenge her father and take down the company. Shelleen, in love with Cat, turns himself around and regains his gunfighting skills in order to help Cat and to also duel Strawn.

The film, despite its irregularities from most films in the Western genre, is one of the most celebrated for its original form, lead female character and music. Marvin’s performances as the two rival gunman, a drunkard and a outlaw, was also singled out by critics, winning him a slew of accolades including the Academy Award for Best Actor.

Sometimes confused with the earlier film Dead Ringer, a Bette Davis picture which not only has a similar title but also similar subject matter, David Cronenberg’s film is, predictably, a much weirder beast.

Jeremy Irons stars in two riveting performances as twin gynecologists, Elliot and Beverly Mantle, who run an esteemed practice in Toronto. A more sinister side to their lives, however, is their trick of sleeping with their women patients; Elliot initially seduces them with his charms and after a while Beverly steps in without the girl knowing.

When famous actress Claire Niveau, played by Genevieve Bujold, comes to see them with a fertility problem, their system breaks due to Beverly developing feelings for her. Claire eventually finds out, and although she agrees to continue seeing Beverly, she leaves to film a movie and Beverly has a breakdown, largely because of his newly started pill addiction.

Taking a dark turn, Beverly then has custom designed gynecological tools designed by an artist and, in a fit, assaults one of his patients, getting the twins suspended from their practice, this time leading Elliot into a downward spiral of depression and addiction.

Unlike most entries on this list, the two characters are not played as opposing types or personalities, but rather as a figurative pair of Siamese twins. As the film continues and their life veers out of control, the more the two characters begin to depend on each other and the more similar Irons’s performances become, making it often difficult decipher which is which.

Chinese action auteur John Woo took an incredibly ludicrous and improbable script and turns it into one of the most intense and acclaimed action movies of the 1990s. The premise has FBI special agent Sean Archer, played by John Travolta, finally catching his arch-enemy Castor Troy, played by Nicholas Cage, who is the terrorist who killed Archer’s son six years earlier.

Troy has planted a bomb somewhere in Los Angeles but goes into a coma before the location of the bomb is extracted.When Troy’s accomplices won’t disclose the details, the FBI surgically removes Troy’s face, putting in on Archer so that he can infiltrate Troy’s circles and stop the bomb. Unfortunately, Troy wakes up and forces the surgeons to attach Archer’s face to him. The two then assume each other’s lives, trying to stop the other all building up to a typical Woo-style showdown.

The plot of the film is a pretty unbelievable but once you get past that, the film is one of the most emotionally powerful and action packed thrillers of the decade and the grandiose action scenes are similarly brilliant, filled with clever sequenced full of lots of stylized slow motion.The ridiculous plot also helps set the stage for two of the most underrated performances of the time, especially for an action movie.

Cage and Travolta’s performances are quite remarkable, due to the complexity of playing a person acting as another person. The layering of their characters and personalities requires much more concentration and focus than the film’s genre and style might suggest. The effort put forth by the two actors carried the film, bringing out the complexities of the situation while not making the film too ridiculous.

This hilarious and emotional satire of Hitler’s regime leading up to World War 2 stars Charlie Chaplin as the two main characters of the film, as well as directing and writing it. He plays Adenoid Hynkel, the dictator of Tomainia who obviously represents Hitler and his empire. His other character is the Jewish Barber who becomes involved with an uprising force trying to kill Hynkel.

The film divides the story between the two characters equally, providing a devastating portrait of repressed Jewish life as well as a ridiculous parody of the Nazi party. The film also mocks the fascism of Mussolini in the form off the character Benzino Napaloni who is as egotistical and bumbling as Hynkel.

The Great Dictator was Chaplin’s first entire “talkie” film as well as one of his most iconic and successful. Nominated for 5 Academy Awards including Best Picture, the film finds much humor in its dark subject without disrespecting the seriousness of the situation. Classic Chaplin charm and slapstick gags are interwoven with heavy handed political satire of the hypocrisy of the Nazi movement.

By having himself play both Hynkel and the persecuted Jewish Barber, Chaplin compares the two characters directly bringing out the differences in their personalities and allowing for some hilarious antics. The film, while not very accurate in its depiction of Hitler, is still historically relevant due to its successful condemnation of Nazi politics.

Although today it is regarded as one of Chaplin’s finest films and performances, audiences did not like his shift to political films and it effectively ended his reign in Hollywood.