Ingmar Bergman’s Persona give us the unique perspective of Elisabeth Vogler, a Prima Donna actress who, after an embarrassing incident, decides to be silent and not speak to anyone, anymore, under any circumstances. But the need for communication always finds its way. It is with the arrival of Sister Alma –ironically, the Spanish word for “soul”– that Elisabeth Vogler finds a beacon of sympathy, and most important, a better vessel for her voice.

In Persona, the definitions of “individual” and “identity” crumble; while Mrs. Vogler needs to be taken care of, Alma discovers how much she really, in turn, needs her, too. A symbiotic and almost parasitic relationship flourishes, causing in the silent body and the speaking soul an epiphany: is who they truly are who they thought they were?

The Psychoanalytical Theory ties up with language in that sense, and our ability to form communication systems is the reaction of that action; it is not a need to be able to understand what is communicated to us, but a necessity to feel that we make ourselves clear, and that our message is received with clarity.

Do you remember how, when we were infants, we depended exclusively on an adult-figure to translate and interpret our messages? Sometimes they accurately understood us, but sometimes we meant to draw a dog, and they saw a bicycle. Is that child that we were the creator of our adulthood?

We, as ever-growing, changingbeings, need to remember as much we need to forget. We learned how to speak, let’s say, to an adult. But as time passes, we need to forget that and redefine it in order to become adults ourselves; memories and symbols play an important part on sculpting or carving our personalities and dreams, the Latent Content of them are, for our inner child, the way to deal with our adult self. 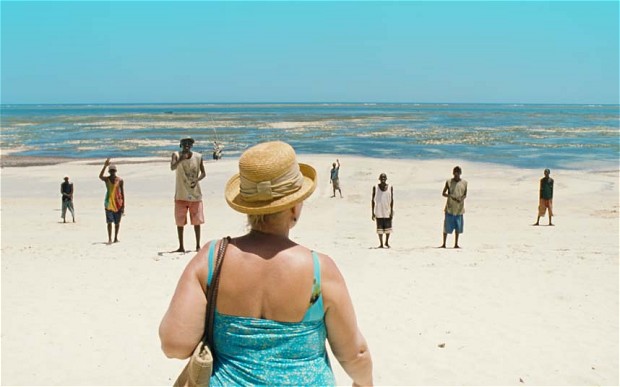 This Trilogy is, from the list, the crudest and yet most beautiful set of films. In Paradise: Love, Faith and Hope, Uldrich Seidl narrates the story of three women in different aspects of their love life, their faith, and their childish hopes.

Each one has an internal struggle, known only by them, and that can be understood as an unresolved issue from their past. With Paradise: Love, we see several things; from class-conflicts and racial bias, to romantic expectations. With Paradise: Faith, which is the most intense of the three, we perceive how beliefs and ideals can be an obstacle for happiness.

Paradise: Hope shows us the need for attention, and how our self-image molds us. The force which unifies each of the stories, besides their familiar relationship, is Eros, that force inside of us that moves us to pleasure, to let us feel desired and to desire others, too.

It is then, by definition, a mirror of what we want versus what we need. Again, then, the confrontation between repressed desires and what each character perceives as happiness is exposed, with detail, leaving out any misinterpretation we can have while watching the films. But, the loved object (or subject) that Roland Barthes so perfectly described once, is then faced with an ultimate truth…

Concluding our list, here are three movies that give us the counterpart of that man with butterfly wings; Thanatos, the impulse of death. Not losing the perspective and context of these terms, we finish this Latent Content list with what can be defined as a consistent and existing force in every human being. Perhaps not as one can imagine, because we are not talking about suicide, or death itself. What Thanatos is about is, precisely, impulses that which serves the opposite of love.

Naturally, the first thing that comes to mind when shown this premise is that hate is the opposite of love, but there is a bigger picture to that. These three films each represent a piece of Thanatos and how it is then transliterated to actions, which eventually –and inevitably– drag reactions with them.

These forces, all of them inside of us, are what guide us through life, per sé; it is Eros who make us blush, and Thanatos is responsible for that moment when the butterflies are all dead in our stomachs. Correlated and unified, it eventually transforms us, and yes, there are times where what can seem to be an Eros’ element –sex in Shame and Repulsion, motherhood in We Need to Talk about Kevin – can, at the end of the road, be completely transformed into a Thanatos’ object.

Each film has in their plot a sex aspect that, contrary to what one would expect or believe, isn’t at all positive or healthy. Each character has an internal battle with their desires, and this translates in how they relate among their peers. Repulsion shows us a woman with, as the title says, repulsion to her loved object.

Shame shows the male psyche, driven to the extreme of the sexual spectrum, giving the protagonist an awful sense of emptiness that no one and nothing can ever fulfill. We Need to Talk about Kevin is, on the other hand, Thanatos at its final stage. We see a woman that at first didn’t really want to be a mother, and her son who since his early years was resenting that lack of desire for him, concluding with a peace offering, like a noble hunting trophy.

Our minds have different levels of comprehension according to what we are capable of understanding… nay, what we really want to see, is what we actually only see; sometimes we can feel enlightened while wide awake, sometimes we receive those answers disguised as dreams, it all depends on how we want to feel about it, and how much thought we are willing to give.

Our brains do not ask questions that have no answers because we evolved wanting to understand and comprehend what is around us. What is out of our understanding, literally does not exist.

It is then a huge mission our unconscious has processing information. The purpose of the Art of Films must be precisely to give a body to the bodyless, as we give voice to the voiceless. Filmmakers find always the way of –remembering Salvador Dalí and his Un Chien Andalou– taking our eyes and slicing them wide open, letting out all the substances we, as thinking-beings, have beneath.

After all, the silver screen was created to feed our fantasies and dreams, and also for artists to express what they conceive as real. It is through The Seventh Art where all of our imaginations come to the physical plane and, through an ever-godly projected light, are projected, as magic, for the world to see, and to dream, and to remember.

Author Bio: ÁNGEL sees life through words. Born in San Lorenzo, Puerto Rico, this twenty-eight years editor tries to experience art in any shape or form not being afraid of trying everything and experiment with diversity: from classical theater, photography, astronomy, to tattoos designs. Currently, Ángel works as a full-time editor and stenographer, employing his free time in his favorite types of books: films.