The real event: The film is based on the murders of Henry Lee Lucas and Ottis Toole. Henry was raised by an abusive mother who forced him to wear a dress and watch her have sex with different men; his mother was the first person he killed and most of the people he murdered were women.

Ottis was sexually abused by his older sister and he was a pyromaniac. When Henry and Ottis met, they started to commit murders that could satisfy both of them. When they were caught, Henry claimed to have killed more than 900 people.

The movie: The movie is literally a portrait of a serial killer; the story is told from Henry’s perspective, but it involves his friend Ottis and the crimes they committed together.

“Henry: Portrait of a Serial Killer” shows two people killing just for the urge to kill, but even when we see these men killing, it doesn’t compare to the real life murderers that did worse things in a more sadistic way.

Ottis’ sister, Becky (his niece in real life), falls in love with the mysterious Henry. His brother has a sexual interest in her, and this makes that Henry wants to protect her. By protecting her, he takes Ottis out of the house to get a beer and they end up killing two prostitutes.

After this they develop a friendship where they both go to murder whenever they feel like it, and at the end of the movie Ottis rapes his sister and Henry kills him, trying to protect her. She is a very important element to the story, because thanks to her, the movie develops a snowball of situations that end up with her dead.

In the first few minutes of the film, we see four of the murders that Henry Lee Lucas claimed he committed in real life. It presents them in a very original way; while we see the dead person on screen, we listen to what happened, but we never watch it, which improves the tension and the spectator’s imagination.

Although the film was finished in 1986, it wasn’t released until 1990 because of its violent content.

The real event: Kit (Martin Sheen) is based on real murderer Charles Starkweather, who committed a series of murders while he was trying to escape from the second one, when he killed his girlfriend’s parents and her baby stepsister. Charles and his girlfriend Caril drove from Nebraska to Wyoming; he killed every witness on the road, until they got caught.

The movie: The first scene tells it all; Holly’s sweet voice narrates her story while she plays with her dog and then with the silence, we know this is going to be a sad story.

The construction of the characters is amazing. Holly never shows any kind of emotional response for her father’s death, or her dog’s death or any of the rest. Kit, on the other hand, is paranoid and he feels that he can kill, so he does it with no further explanation.

They are both shallow; she likes him because he looks like James Dean, but she never cared to know him deeply. She says didn’t know he was violent, but still drives off with him and lets herself go with the flow.

The movie is visually beautiful, as we see all the people Kit kills while we witness the majestic nature. That’s what the movie tells us, that humans are just a small part of the big world. Kit dies and Holly doesn’t even care about it, and the movie reminds us how ephemeral we are. 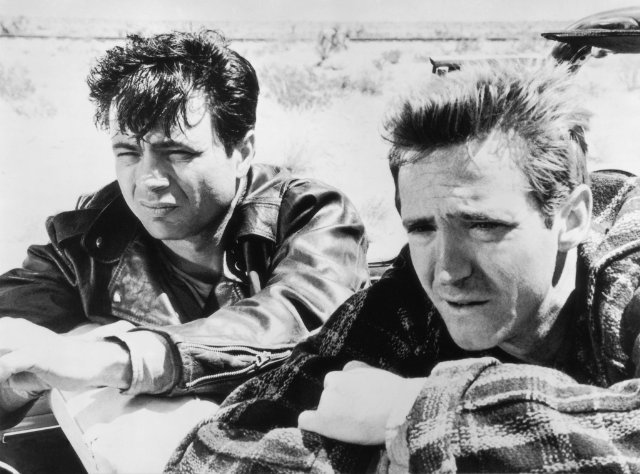 The real event: Perry (Robert Blake) and Dick (Scott Wilson) killed Mr. and Mrs. Clutter and their two sons Nancy and Kenyon in Holcomb, Kansas in 1959. Truman Capote read the story in the newspaper and decided to investigate the case and wrote the book with Harper Lee’s help.

When the police caught the killers, Capote decided to do some more research and went to prison to interview them. It took him six years to finish the book and he developed a good relationship with both of the killers, especially with Perry.

The movie: The film is based on the Truman Capote’s book “In Cold Blood”; the story tells us how Perry and Dick killed the family, how they run away, how they get caught and how they get killed. Capote made a masterpiece of the literature with the book, but even when the story is full with real details, many of the family situations that the characters remember are part of Capote’s imagination.

“In Cold Blood” is told from the perspective of the murderers, which helps take us to the mind of the killers in trying to understand their motives. The movie is a rollercoaster of emotions; you just can’t stop watching, it makes you feel like you’re there running away with Perry and Dick.

The film is built by itself; it feels like we’re living the case or watching a documentary. The montage is amazingly done and the lightning gives the movie a tone of mystery. Robert Blake and Scott Wilson played their roles in a way that we actually feel they are the real Perry and Dick.

The real event: “Zodiac” is based on the crimes of a serial killer who called himself “Zodiac”; he claimed to have killed 37 people, but police only proved seven between 1968 and 1969. He used to send letters to the press in encrypted codes; the case was closed in 2004 but was reopened in 2007. The killer hasn’t been found yet.

The movie: “Zodiac” is a piece full of emotions; it involves us in its diegetic world, we watch the movie for 160 minutes wondering who’s the killer and when are they going to catch him, and what makes the movie so great is that David Fincher decided to be faithful to the real story and not give an ending where Zodiac gets caught, instead we get Graysmith’s book being published, we get fear, and we get questions. By the end of the movie, it’s difficult to readapt to the real world.

The main character is the investigation, which is what makes the film so interesting, because it makes us feel like we are Graysmith’s partners.

We, as spectators, never know more than him, we discover clues and pieces just when he does, we don’t know if we saw the killer, and we can wonder if we think the killer is Arthur Leigh Allen or maybe some other person we might have seen briefly, but the best part is that we never know.

Fincher is a very meticulous director who loves thrillers, something you can tell in every movie with the attention he gives to little details, and “Zodiac” isn’t the exception.

The real event: The character of Hans Beckert (Peter Lorre) is based on real murderer Peter Kürten, who was known as The Vampire of Düsseldorf and committed a series of murders and sexual assaults on young girls. He attempted to drink the blood of his victims, which is why he was called a vampire.

Although he started his crimes when he was just a 9-year-old boy, the period of time when he scared the whole town was between February and September of 1929.

The movie: Fritz Lang denied many times that he was inspired by Kürten’s case, but there’s proof that demonstrate that he and his wife (and co-writer) Thea von Harbou researched his crimes, consulted the case with the police, and interviewed several child murderers, including Peter Kürten at a mental institution.

Lang shows us a more human killer, instead of the blood lover that Kürten was in real life. When we hear Beckert’s speech, we see a man regretting his condition; he just can’t stop, no matter how much he tries. The movie tells us this: We need to watch our children.

The film’s approach is very different from what we are used to watching nowadays; we barely see the killer on screen, there’s no visual violence, and his murders are left to the spectator’s imagination.

The important issue in the movie is the persecution and the organization of two different institutions: the police and the underworld. The identity of the killer is not a mystery; we see him looking in the mirror, trying to figure out how can he be the monster he reads in the paper.

The movie shows a great picture of how society, in that time, was afraid and paranoid, and it shows how people can do justice by themselves.