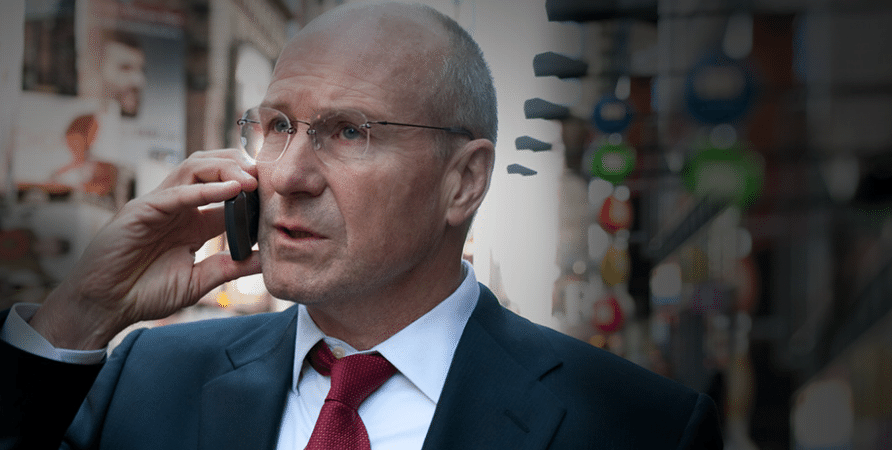 While other films have attempted to show the events of the financial crisis through analog and character composites, Hanson’s HBO film, based on the book of the same title by Andrew Ross Sorkin, is the ultimate inside baseball look at the nervous days in the summer and fall of 2008. William Hurt portrays Treasury Secretary Henry Paulson, and the film follows his efforts to navigate the country through the rapidly developing economic crisis.

In a kind of narrative device that has the ethos of a Greek Chorus, the film returns to scenes at dinners between Bernanke and Paulson, as each attempts to confront the sobering reality of the crisis unfolding before them. The quiet tone of those scenes shows the power of the crash, and the two men who realized its intensity perhaps more closely than any others, being so close to the fire as they were.

The film also employs a variety of actors who fill out the gallery of banking executives for each of the major Wall Street firms – James Woods, Tony Shalhoub, Matthew Modine, and many more.

The centerpiece of the film is a scene depicted in Stone’s Wall Street sequel – the executives, summoned to a meeting with Paulson, wherein the gravity of the financial crisis sinks in. Hanson’s taut direction fills this scene (any many others) with tension, a nervous energy running through each actor that’s matched by the sharpness of his cutting.

An innovative exploration of the financial crisis, Dominik’s film, based on the novel Cogan’s Trade by crime fiction writer George V. Higgins, isn’t set amongst Wall Street tycoons at all. Its action, concerning a loose organization of criminals in an unnamed American city, focuses on a robbery of a card game and the disruption of business as usual in the underworld.

The film plays out against the backdrop of the unfolding financial crisis and the 2008 presidential election that in many ways became a referendum on how best to repair the rapidly dissolving American economy.

Its criminal characters spend much of the film meeting in cars or bars, discussing what to do about the suspected card game thieves. As they make their plans, the radios are tuned to news stations filtering updates about the economic disaster, and TVs flicker with images of presidential candidates discussing their economic plans. With this setting, Dominik uses the criminal organization as a metaphor for the United States’ banking sector.

Panic is spreading through the ranks – chaos reigns, as Richard Jenkins’ Driver character reports to Brad Pitt’s Jackie (the enforcer brought in to settle the problem). The card game robbery has apparently resulted in a loss of confidence in the entire economic system of the criminal underworld of the film’s city, in a striking parallel to the shockwave tearing through the financial system of the country at large.

The film’s lasting contribution is its unflinching cynicism about the economic system. Its very framework, which essentially makes the argument that the entire legitimate banking system of the United States is no different than a criminal enterprise, is just its opening salvo.

Its final moments, in which Jackie has seemingly restored order by settling up with the thieves, is predicated on a return to the systemic problem that enriches the strong and preys on the weak. In a bar with Driver, watching President-elect Obama’s victory speech in Grant Park,

Jackie scoffs: “This guy wants to tell me we’re living in a community? Don’t make me laugh. I’m living in America, and in America you’re on your own. America’s not a country. It’s just a business. Now f—– pay me.” The film crashes to black, accompanied by Barrett Strong’s “Money (That’s What I Want).”

The film is anchored by Leonardo DiCaprio’s inspired performance as Belfort, a high wire act of drug-addled madness, callous indifference to the suffering of others, and lascivious, animalistic fervor. The speeches Belfort delivers to his traders, equal parts motivating and terrifying, take on the mixed character of a Nuremburg rally and a tribal ritual.

The film’s depiction of the Wall Streeters working for Belfort reaches its apex near the film’s final act, as Belfort, in defiance of the SEC, which is closing in on his illegal trading practices, decides to remain as head of the company, despite being urged to leave. He makes his decision, beating his chest in rhythm with his clenched fist – the traders on the floor join in, pounding their chests and hooting, as the company descends into unbridled chaos.

Scorsese’s film took criticism from many, as his films often do, for apparently glamorizing the lifestyle of Belfort and his compatriots. However, the depiction of behavior in the film is not necessarily an endorsement – Scorsese’s goal is to investigate how someone might be seduced by this world, with its profligate attitude towards money, addiction to brain fuel in the form of drugs, and chaotic attitude towards sex that seems like something out of Caligula.

But the key to the film is the final shot, which finds Belfort, after leaving jail, delivering a talk at a seminar to people who want to learn how to be just like him. The camera tilts up, and an entire room of wide-eyed wannabe rich people sit in rapt anticipating, hanging on Belfort’s every word.

The shot achieves a mirror effect; the audience, looking into the camera, is us, and we are to blame. Belfort succeeds because we not only refuse to condemn him, but actively seek to imitate him. In a career characterized by striking final images, this may be Scorsese’s finest one. 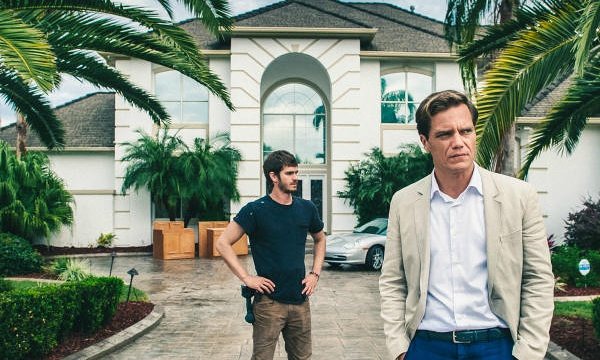 Bahrani’s film is a close examination of the other side of the financial crisis, an on the ground look at a housing scam artist taking advantage of those who lost their homes in the dissolution of the mortgage bubble. Andrew Garfield’s Dennis Nash is a construction worker (whose industry is suffering directly from the decline in housing), who finds himself foreclosed on by a local real estate shark, Rick Carver (Michael Shannon).

The film takes its cue from Wall Street, in which Nash enters into a kind of Faustian bargain, going to work for Carver and helping him foreclose on other Florida residents in an effort to win enough money to buy back his own home. The lure of money is too much for Nash to turn down, despite his moral misgivings over how he and Carver are operating. His desire to provide for his own family and reclaim what he lost push him further into a world of greed and moral compromise.

One of the few films that focuses on the victims of the financial crisis, some of the film’s most striking moments occur in the many montages that show Carver and Nash at work, foreclosing on many residents who have fallen behind on their payments.

The pair take homes from single mothers, minorities, and most emotionally, an older widower who seems to be the victim of a reverse mortgage scam. The images of the victims, packing their belongings and sitting curbside, in varying degrees of rage, shame, and desperation, put a human face on the devastation wrought by the crash. 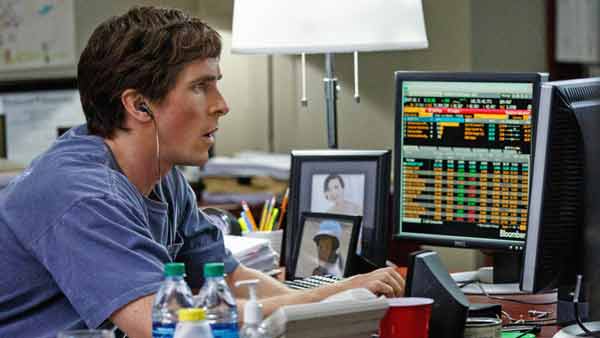 McKay’s Oscar-winning screenplay attempts something admirable – it tries not only to dramatize aspects of the financial crisis, but actually explain it in narrative action. Like the Michael Lewis bestseller upon which the film is based, McKay’s approach is to make the non-fiction narrative as engaging as possible, with its outsized characters and thrilling pace leading the audience through a complex series of events that led to the crash.

The moral conundrum at the center of the film is mostly treated with cynical distance. The film focuses on a small group of financial wizards (played, in separate stories that only occasionally intersect, by Brad Pitt, Ryan Gosling, Steve Carell, and Christian Bale), each of whom discover at various moments that the entire housing market of the United States is a house of cards waiting to collapse.

They each decide to bet against the market, essentially wagering that the entire economy will fall apart, and they’ll make out like bandits. When the inevitable happens, and their big short begins to pay off, they each in varying degrees begin to wrestle with the consequences of their actions, as they realize that they’re profiting handsomely off of untold amounts of human misery.

McKay’s film is a furious ride, laced with cynical characters that it refuses to glamorize, despite its occasional willingness to humanize them. It portrays them as the smartest guys in the room, who saw what no one else did. However, the film as a whole also indicts the system that allowed them to make such a bet in the first place.

Its palpable rage is most frequently manifest in its assault not on its characters, but on the audience watching the film, as McKay breaks the narrative action to argue his point – celebrities (Margot Robbie, Anthony Bourdain, Selena Gomez) appear, addressing the camera, to explain complex financial products, the use of which caused the crash.

McKay perhaps saves his strongest criticism for a distracted American public, represented by its obsession with (in McKay’s formulation) meaningless popular culture (the release of the iPhone, the Kardashians, etc.), to which footage is cut into the film, functioning as transitions to show passage of time.

It’s as if McKay is shouting at the audience, “Look at all of the nonsense you were worried about while these people took everything you had.” The confrontational style of the film is among its strongest qualities, as McKay is attempts to summon the outrage that, in his estimation, fizzled too quickly.

Author Bio: Brian Brems is an assistant professor of English and Film at the College of DuPage, a two-year institution in the western Chicago suburbs. He has a Master’s in English (Film & Literature) from Northern Illinois University. He also serves as the Director of Development for the Limelight Theatre Company, where he writes, directs, and teaches writing classes.