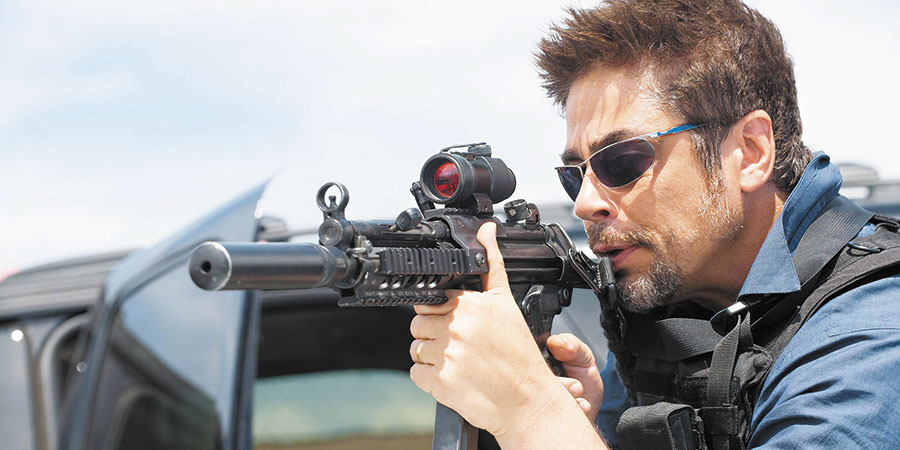 Often an overlooked aspect of filmmaking, a film’s score is a vital part of its overall composition. Imagine watching a sad movie without the appropriate music, or a scary film without the eerie, screeching sounds that help build up the tension. The music in a film can produce just as much of a response as what’s happening on screen.

2015 produced a number of films with delightful original scores. While it’s worth nothing this list could be significantly longer, it has been narrowed to just ten films. Despite a plethora of great films with great music, ten stood out amongst the rest and managed to make their way onto the list. This list will include everything from synthy throwbacks to epic orchestral music, but every choice has earned its way onto the list.

After watching It Follows, don’t be surprised if the first thing you do is download the score. It just might be the best horror movie score in over a decade. Though it’s clearly influenced by the likes of Halloween, it still manages to sound like nothing you’ve ever heard. As if the film’s numerous other strengths weren’t enough, it also had to have the best film score of 2015.

The retro-inspired aesthetic of It Follows is one of the strongest aspects of the film. The synth-heavy soundtrack only helps to strengthen that. Though reminiscent of earlier film scores from the 80s, Disasterpiece has no desire to be a copycat. This is entirely his own work.

“Title” stands out as the best individual track of any film score to come out in 2015. It’s eerie, moody, but nevertheless a joy to listen to. When watching the film, the track heightens the mood significantly. When listening to the song outside of the film, it still manages to be a stellar, oddly catchy song. You’ll find yourself whistling the song when you least expect it.

Singling out that track does not mean, however, that the film doesn’t work as a cohesive whole. On the contrary, the film’s score is thoroughly consistent. From the first track down to the very end, the It Follows OST practically demands your attention.

Ennio Moricone is most notable for his scoring of Spaghetti Westerns several decades ago. His music has been reused in countless modern films and television programs, but his newer contributions are hard to come by. Tarantino recently rallied him up to score his first western in forty years, and he miraculously agreed. Morricone’s score for The Hateful Eight is downright enchanting from beginning to end. If you need proof that Morricone is a legend, look no further.

Tarantino usually avoids putting original scores in his films. He’s known for gathering music from other films and compiling it all into a neat little package. In fact, Morricone’s past music has been included in Tarantino’s previous films. However, prior to The Hateful Eight, Morricone had only contributed one original song to a Tarantino film. While Tarantino’s use of existing music isn’t inherently bad by any means, hearing a cohesive original score by Morricone is a dream true.

Morricone’s tension-building music is the perfect companion-piece to Tarantino’s whodunit script. The score, like the film itself, is mysterious and moody. It’s reminiscent of Morricone’s old Spaghetti Western scores, but it also offers something new and original. It’s nothing like the scores found in modern blockbusters, and that’s why it stands out. It instantly grabs the audience’s attention because it sounds nothing like anything they’ve heard in a modern movie. It’s unique, captivating, and genuinely special.

3. Michael Giacchino – Inside Out

Michael Giacchino is no stranger to Pixar movies. His previous scores include Up, The Incredibles, Ratatouille, and Cars 2. He even earned an Academy Award for his phenomenal work on Up. His musical contributions have been consistently excellent, and Inside Out is no exception.

Before the film’s release, Giacchino mentioned that the score for Inside Out would be his most emotional yet. Given the emotional intensity of his Up score, you’d think his claim would be an impossibility. However, give the score a listen before you doubt the man. It turns out he’s right.

It’s not as if the score is without more upbeat songs. On the contrary, the OST has a good mix of different songs. The film itself is an emotional rollercoaster, and Michael Giacchino seeks to keep that in mind. Listeners can immediately hear the difference between a track like “First Day of School” and a track like “Tears of Joy.” Michael Giacchino doesn’t settle for making a score that’s just fun. He wants something that perfectly blends in with the film. He does a stellar job.

• Highlights: Bundle of Joy, Chasing Down Sadness, The Joy of Credits

There were some beautiful period films with beautiful period scores. Brooklyn, The Danish Girl, and Suffragette all deserve an honorable mention on this list. However, one period film stood out amongst the rest for its breathtakingly beautiful score, and that’s Carol. Part of what makes Carol’s score so stunning is the nature of the film. The film relies heavily on silence to convey emotions. Though there’s no shortage of brilliant dialog, this is no Before Sunrise. The film often benefits from its quieter moments. As a result, Burwel is able to swoop in on these moments and deliver stunning pieces of music that heighten the emotional moments.

This is a movie that heavily relies on subtlety. Carter Burwell recognizes that and composes a score that’s suitably subtle but never boring. The soft, elegant songs that comprise the soundtrack to Carol never fail to impress. Earning an emotional response from its listeners doesn’t seem to be a challenge for Burwell. It seems that others agree with this, as the score earner Burwell his first Academy Award nomination.

A film as energetic and intense as Mad Max: Fury Road absolutely needs a score that can keep up with the rapid pacing and non-stop action. Junkie XL’s score is the perfect match for the film. This energetic barrage of noise is beautiful and booming. Though the deluxe edition runs at over two hours, you’ll find yourself wanting to listen to it all the way through multiple times. It’s just that good.

There’s a reason George Miller wanted to release a black and white silent version of his film accompanied by the score. The film is filled with heart-racing action, and the score is suitably tense as a result. The song “Brothers in Arms,” a standout from the OST, is perhaps the best example of why the score works so well. It’s a song that absolutely adds to the film. You feel as if the scene it accompanies would be completely different without the song.

That’s often a good way to judge a film’s score. If you find the soundtrack to be a necessity, then it’s a keeper. It’s hard to imagine Mad Max: Fury Road with a different score.