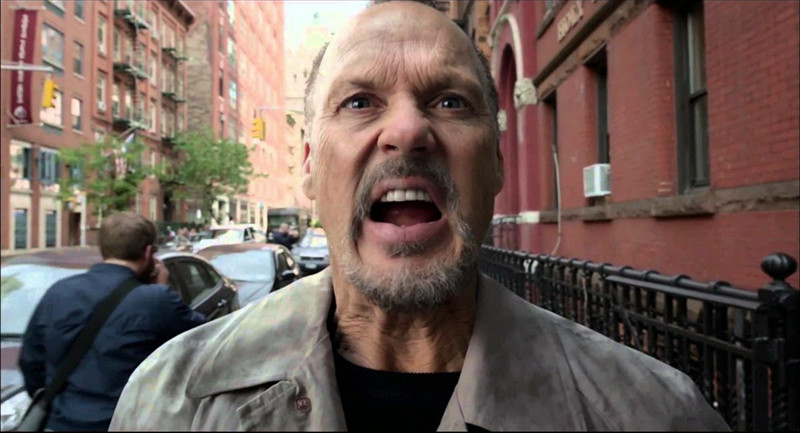 Few have made the comeback Michael Keaton has done. The perennial star of 1989 returned with a bang, both saluting his iconic superhero and questioning the fame around it.

´Birdman´ proved that Keaton was more than just an eighties/nineties celebrity clutching for his breath (the same of which cannot be applied to his peers Pierce Brosnan or Richard Dean Anderson), but a viable tour de force he has always been. An Oscar nomination sealed his reputation in the world of cinema, affording him a dignity years after his ´Batman´ prime.

Although Keaton´s career has seen its share of twists and turns (few of his performances between 1998 and 2008 are memorable), he as shown himself as a chameleon, capable of making any part his own, before distinguishing them from one another. Capable of playing a leading man with aplomb, enjoys being a member of ensemble, Keaton has the presence to play many differing parts.

A career that started in the eighties, veering to the present day (his performance in 2015´s ´Spotlight´ is very strong indeed), Keaton has kept his character above water, remaining one of the best actors who works in Hollywood. 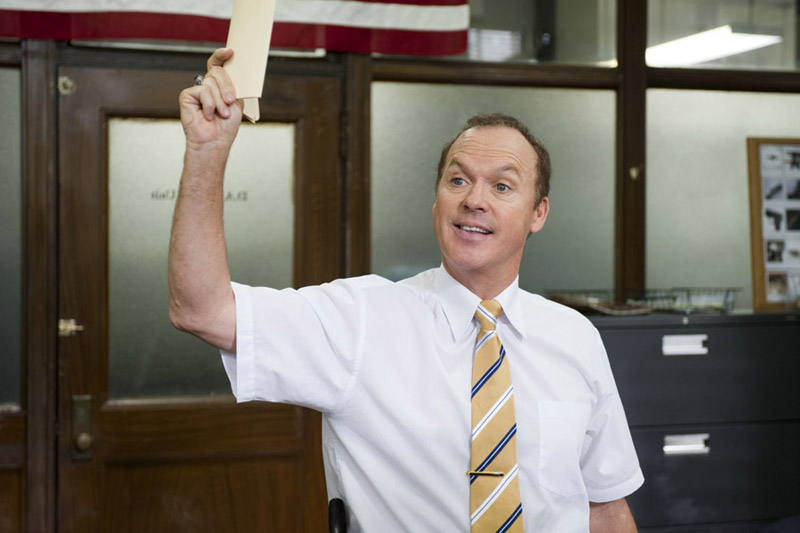 One of the funnier supporting performances in recent years, Keaton´s Captain Gene Mauch is the burly boss workers can´t make their minds up about, but audiences cherish. Insisting on the title Captain Gene, Keaton delivers the witticisms faster than Mark Wahlberg´s Tery Woitz can shoot bullets; “just captain. It sounds creepy captain Gene”.

Co-starring alongside Will Ferrell is never an easy task, but Keaton manages it well, without attempting to upstage the former ´Saturday Night Live´ performer. Placing himself into a wrestling scene, conveniently taking place at a funeral, Keaton´s physical comedic side takes stage as he whispers fear into the troops at his side. Throwing himself into the centre of the fight, Mauch is both methodical and imperious.

Ultimately, Keaton reminds audiences alike the humanity within him, placing his life for his family as he later exclaims; “Listen guys, I’ve got two jobs. I work here, and I have another job at Bed, Bath, and Beyond. I’m doing it to put a kid through NYU, so he can explore his bisexuality and become a DJ.” It´s witty, it´s human, it´s Keaton at his best, and this is a comedic performance for the age. 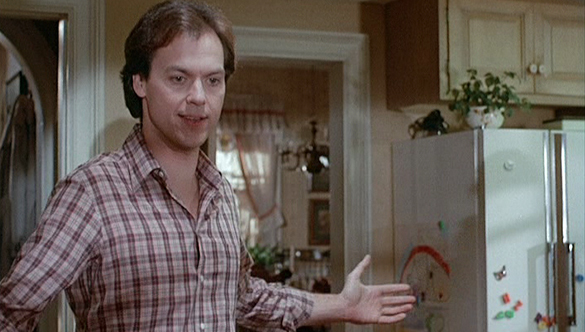 Yes, the film´s not aged well, the film is at times both mysognistic and misandristic, the road opened up for a succession of sub-par John Hughes script. But where Keaton is concerned, he is, at all times, watchable, affable and at times heart-rendering. As pre-described in the title, Keaton plays Jack Butler, a stay at home parent, grappling with the realities of familial domesticity.

Taking a parental role, perhaps not well-recgonised in early eighties cinema, Butler struggles with the care of his children, before he realises the benefits of the vocation.

Dividing his attention over his three offspring (“Kenny, don’t paint your sister! “- classic line) and the everyday chores, Keaton shades his character with innocuous witticisms to get himself through an average day. Keaton shines as the every man, unused to this seeming change of lifestyle; gender roles, regardless, this is a strong performance from any actor.

“Honey, you gave me some real good advice once, so let me give you some of my own. It’s real easy to forget what’s important, so don’t.” A profound line, it illustrates Butler´s transformation from macho breadwinner to reflective human, Keaton gives a rounded performance regarding the changing perspective´s and reflection´s of a man who changes.

Regardless of the film´s ending (nonsensical to watch in 2016), Keaton is nuanced enough to invest in the character´s struggles, not seen with such vigor since Dustin Hoffman´s Ted Kramer. 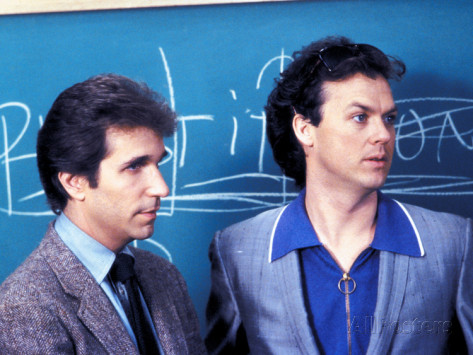 “What if you mix the mayonnaise in the can, WITH the tunafish? Or… hold it! Chuck! I got it! Take LIVE tuna fish, and FEED ’em mayonnaise! Oh this is great.” Keaton´s first full length role comes in Ron Howard´s erratic and eccentric comedy. Deathly funny (not least as it is set in a morgue),Keaton plays an unusually energetic co-worker to Henry Winkler´s stodgy Chuck. The yang to Chuck´s ying, Bill Blazejowski is a loose canon, showcasing Keaton´s comedic penchant.

“Isn´t this a great country” Blazejowski quips about making money, perennially walking in the style of a lay-about, placing himself in everyday situations with stoical recgonition, he is the everyday man, the funny sidekick to the lead, the Manuel to an exasperated Basil Fawlty.

The funniest scene between Keaton and Wrinkler occurs over a discussion about prostitution, as Wrinkler grows ever more exasperated, Keaton keeps himself grounded.

Putting chalk on a blackboard he throws together a lesson all teachers would be too afraid to break down: ” Let’s break up the word. First there’s Pros… well, that doesn’t mean anything really… then there’s Tit… we all know what that means… and then there’s shun to shun is to say No! To push it away! To shun something is, well… it really doesn’t belong in this word at all, really.”

With such panache, Blazejowski gustily puts in the work, both flippant and ascerbic. One of the more under-rated performance in an eighties comedy, rivaling John Belushi´s long list of smucks. 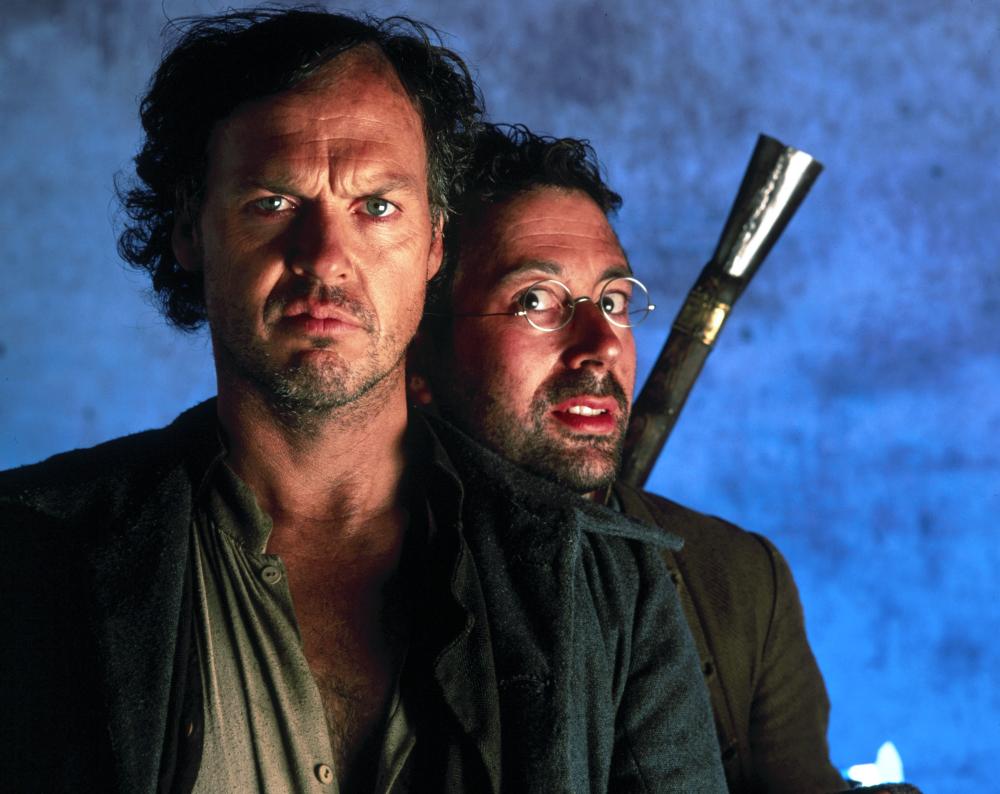 Scraggy haired and shabby, loquacious, but twee, Dogsberry is the perfect sidekick for the leading characters. Given long extended pieces of linguistic verbatim, Keaton gives Dogberry the diction of a drunken vagabond, evoking Samuel Beckett´s ´Waiting For Godot´almost as much as he inherites the Bard.

“Marry, sir, they have committed false report; moreover, they have spoken untruths; secondarily, they are slanders; sixth and lastly; they have belied a lady; thirdly, they have verified unjust things; and, to conclude, they are lying knaves. ” Keaton´s delivery is thrown and slurred; the perfect contrast to his Batman/Bruce Wayne persona only a year earlier.

Although the film is one of Kenneth Branagh´s lesser Shakespearian adaptations, the cast choice is strong, with Keaton´s debauched portrayal contrasting Branagh and Emma Thompson´s clearer pronunciation.

A cad at heart, Keaton maintains a certain twinkle in his eye which keeps the audience from despairing for him, making for an interesting film performance, matching the conventionally theatrical actors (a la Richard Briers, Branagh etc) for tone, engagement and character.

Elmore Leonard´s favourite adaptation of one of his works delved into the real world of money smuggling between Mexico and the United States. As agent Ray Nicolette, Keaton is at his physical best, upping the machism frequently found in Tarantino´s work, grounding it in a rugged cop.

Playing alongside the excellent Pam Grier ( at her finest seventies cool), Nicolette feels put together, focused and cool, “I sure you didn´t do anything stupid” he warns her after a diatribe given about her unable to recipirocate due to here posterior in delicate underwear.

As with much of the film, Keaton´s performance is reminiscent of nineteen seventies cool. Where he differs from Grier is his cool refers as much to Paul Newman and Steve McQueen as it does to the blaxploitation films. Keaton maintains composure and collection, impressive given the films involvement with drug dealing and crime, giving gravitas and an icon for adolescent men.

Perhaps Tarantino´s most underappreciated film (it has its fans, ranging from critic Mark Kermode and Tarantino collaborator Samuel L. Jackson, both who claim it as their favourite Tarantino film), it is helped by Keaton´s bruly and physical appearance, keeping the film flowing, much as the script´s rhythm gets stronger. Keaton reprised the character (albeit briefly) in a scene in ´Out of Sight´, but had a significantly smaller performance.