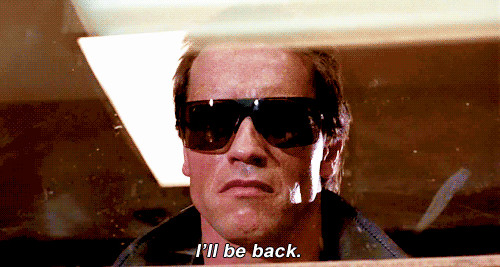 If you are expecting to read anything poignant, philosophical or deep in any way, this is not the list for you.

Ever since he burst on to the action scene in the 1980s, Arnold Schwarzenegger has had a commanding screen presence never seen before. His physical action style combined with his deadpan, Austrian-accented line delivery made for many great memorable one-liners.

Often in “competition” with Sylvester Stallone with competing action films and franchises, his style of film was unique and started many copycat action film stars like Steven Seagal, Chuck Norris and Jean-Claude Van Damme.

He achieved major box office success with action classics “The Terminator” films, “Predator”, “The Running Man”, “True Lies” and “Total Recall”. He even ventured into success with comedy in “Twins” and “Kindergarten Cop”.

He did eventually start to slip with the less than memorable “Collateral Damage”, “End of Days” and “The Last Action Hero” and is now almost forgotten. His recent films “Maggie”, “Escape Plan” and “The Last Stand” among others have barely made a mark.

Even in his bad films, “Batman and Robin” for example, his characters are always so much fun that you can’t help but like them. His Mr. Freeze certainly is extreme and over-the-top, but his delivery somehow makes those characters tolerable.

He has had a recent resurgence with his appearance in “The Expendables” franchise alongside former nemesis Stallone, and it was great seeing them together onscreen kicking ass alongside one another.

Quote: You’re a funny guy, Sully, I like you. That’s why I’m going to kill you last.

Context: Arnold was forced out of “retirement” when his daughter is kidnapped and he is forced to come to her rescue taking on a bunch of hoodlums and a whole island filled with bad guys.

Why is it great: There are many lines from “Commando” that also could have made the list; however, this one sums up his character the best and shows his humor and dialogue delivery which made Schwarzenegger a film icon. The character of Sully ends up being dangled over a cliff and dropped.

The girl then asks “What did you do with Sully”, Schwarzenegger replies “I let him go.”

Quote: I need your clothes, your boots, and your motorcycle.

Context: After reappearing naked at the beginning of the 2nd film, the character’s alliances and motivations are still not clear. All that is known is he is the badass cyborg with an attitude who always gets what he wants.

Why is it great: Who else but Schwarzenegger could stand naked in the middle of a biker bar filled with all sorts of low life and deliver this line with a straight face.

This scene sets the tone for the first act of the film as characters’ true motivations eventually come to light.

Quote: Consider that a divorce.

Context: After discovering his marriage to pre-“Basic Instinct” Sharon Stone has been a fraud, Douglas Quaid (Schwarzenegger goes to Mars to try and figure out what is truly happening and his true identity.

Why is it great: Stone appears later in the film as a last ditch effort to persuade Quaid to join the bad guys and that is marriage is truly real.

She says right before she is shot between the eyes “Be reasonable, we’re married” and then whips out a gun from her back.

Quote: I live to see you eat that contract, but I hope you leave enough room for my fist, because I’m going to ram it into your stomach and break your goddamn spine!

Context: After Schwarzenegger is captured from his prison escape, he is forced to participate in a futuristic fight-to-the-death game show hosted by Richard Dawson which is a cross between UFC and American Gladiators.

Why is it great: Richard Dawson stands out as such a complete egomaniac scumbag; completely different than his suave, debonair personality as the real life host of “Family Feud”. It is great when this moment comes in the film so Schwarzenegger tells Dawson like it is and forewarns his eventual demise through retribution.

Quote: It’s not a tumor!

Context: Schwarzenegger is forced to participate in an elaborate scheme to catch a drug dealer through his ex-wife. He has to go undercover as a teacher in a kindergarten classroom to attempt to learn important information which would lead to the thug’s capture.

One day in class, he mentions he has a headache. One of his students suggests it might be a tumor.

Why is it great: While not a great film, Schwarzenegger has always been able to not take himself too seriously and understand this premise is a “fish-out-of-water” idea where his presence would automatically endues laughter juxtaposed against annoying five-year-olds.