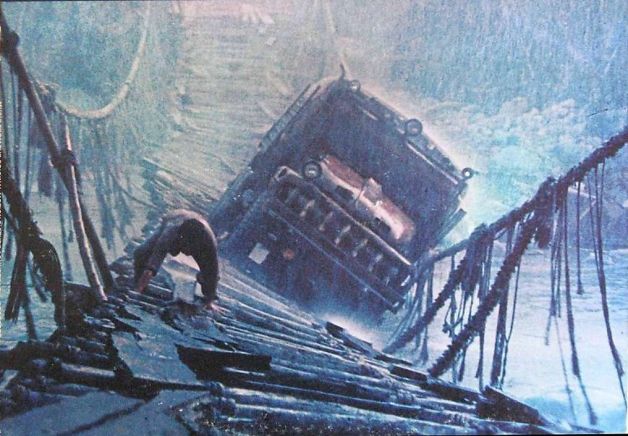 “The film I hope to be remembered by. I have a great fondness for Sorcerer, more than any other film… I consider it my most personal film and the most difficult to achieve… Basically lost for 37 years, its restoration is like Lazarus.”

In the dishabille, desolate swelter of Porvenir, Chile, four despairing men, strangers to each other and themselves, seek sanctuary and anonymity for disparate and dark reasons of their own. When a U.S.-owned oil company, vile in its exploitation of the people and resources in this out-of-the-way locale, through unsafe and incredulous practices, has an oil well explode, with heavy, horrible casualties, our anti-heroes begin to align for the thrust of Sorcerer, William Friedkin’s recently reappraised 1977 existential thriller.

Based on the 1950 French novel La Salaire de la peur by Georges Arnaud, also the basis for Henri-Georges Clouzot’s towering tale from 1953, The Wages of Fear (as well as Howard W. Koch’s barely worth mentioning 1958 folly, Hell’s Highway) Friedkin’s take is that rare jewel that transcends its origins to become something more intelligible, succinct, and exquisite then all its architects could have ever conceived. Sorcerer really is a kind of black mercurial magic.

“Grimly existential, one of those pessimistic stories where men work hard and gain nothing, a tough-guy fantasy as steeped in vintage men’s adventure magazines as it is in the French film it adapts, Clouzot’s The Wages of Fear. Friedkin’s characters may not have much to show afterward, but Friedkin does: the lost gem, the rediscovered masterwork, the evidence that the guy everyone thought had lost it was right all along.”

And all that was leading me where?

Starring a bad ass Roy Scheider (The French Connection, Jaws), whose never been better, and a brow-beaten Bruno Cremer (Maigret, Under the Sand), Sorcerer is, on the surface, a straight-up story of tough guys driving truckloads of highly explosive nitroglycerine across hundreds of miles of rocky terrain, impossible roads, collapsing bridges, and dense jungle furnace; their goal being the site of the oil well fire, their payloads to be used, should they survive the trip, to make an even bigger explosion to quench the furious fires that have already extinguished many ill-starred luckless lives.

For Friedkin, the brain behind such celebrated works as The French Connection (1971) and The Exorcist (1973), Sorcerer should have been the film that pushed him into the upper echelon of cinematic masters, but, initially, this was not the case at all.

The troubled production went over-budget, took years to finish, and, upon its original release, performed poorly—the same year as Saturday Night Fever and Close Encounters of the Third Kind—Sorcerer opened a week before a little film called Star Wars, which capsized it in its considerable wake.

And Friedkin’s very deliberate and responsive pièce de résistance, an intellectual action film, was mostly obscured and without an audience as a result. True to its sweaty, sticky, paranoid milieu, it was a film lost by the birth of the blockbuster.

Recently, in 2013, at the venerable Venice Film Festival, Friedkin was presented with the prestigious Golden Lion Lifetime Achievement Award. When asked by the festival what films he wished them to run as part of his overdue tribute, “I asked them to run only that,” he said, of his paramour shoo-in, Sorcerer.

“Friedkin’s reinterpretation of Clouzot’s 1953 masterpiece is among his most daring works. Three sequences alone— a chaotic car crash in Boston, the unloading of charred bodies in a Central American village, and the explosives-laden trucks crossing a rickety storm-blown bridge — render Sorcerer a classic and retain their power to make audiences gasp.”

There is no reality except in action 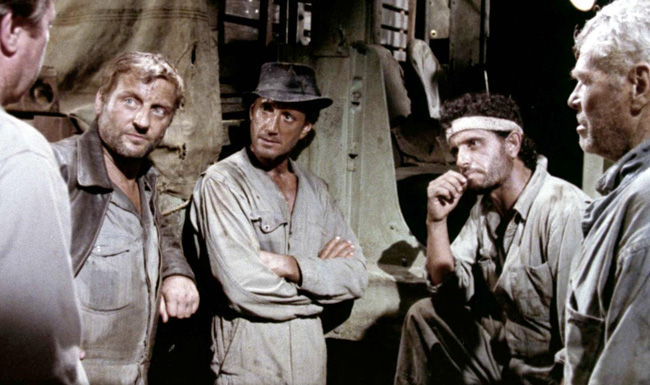 As I’ve mentioned, Sorcerer is a before the letter existentialist road-movie, whose characters are doomed, journeying through a literal, and visceral hell, in a bleak but breathtaking pilgrimage, seeking redemption, and recompense. Part of the hysteria that the film generates, no, delights in—guiltily—derives from the awareness that some, if not all, of these strong-arm bruisers are going to blow up.

The breathless, asthmatic approach to the action is transcendental. Bookended by the image of an imp-like idol deep in the jungle, grinning with the knowledge of defeat, despondence, and maniacal play, Sorcerer endures as one of the finest American films of that era.

Unlike several undisputed exemplars of that celebrated crop, Sorcerer, 37 years on, is as nerve-shredding and neoteric as its peers, and even, I would argue, more so. Having recently witnessed a new 35mm restoration print of the film, ably assisted by a brilliant original score by Tangerine Dream, it’s so much better than you might remember it (if you remember it at all), and it’s more terrifying and trembling, too.

At a recent screening of Sorcerer in New York earlier this year, Friedkin told a rapt audience, “I measure the success or failure of a film on one thing—how close I came to my vision of it.” With this reclaimed masterpiece Friedkin, his vision unclouded and absolute, comes out swinging, and never lets up till the end, with a soft-touch finish that subtly takes everything apart.

Sorcerer casts a shadowy spell, the obligatory happy ending eschewed for something far more spurring, but also, strangely, far more edifying. This is a film whose dividends are dark and deep, like the craters of the moon that our lowlife protagonists seem to navigate on their quest through the eclipse.