Season of the witch

A nightmare fairytale fantasia from start to finish, the spine-chilling 1977 masterpiece from Italian auteur Dario Argento, Suspiria remains an unassailable experience in sensory cinema. With its crazily choreographed camera movements, striking operatic visuals and knowing nods to Hollywood classics, Suspiria is steeped in psychoanalytical themes and made beautifully bitter by relentless and mounting terror.

The mark of Argento’s mentor, Maria Bava, influence much of what we see in the film, tapping into the bulging vein of highly visual effects crafted and culled with the economy and the unbelievable intelligence that Bava pioneered. Argento, with Suspiria, comes full circle, unremittingly claiming and rebranding Italian exploitation as his own ever after.

Primitive colors and a tawdry double murder mounted with the baroque virtue of a music video suggests the giallo lead-in was a lie and supernatural forces are at play. And thus, with a Hitchcockian affection for suspense and bête noire, Suspiria proves that Argento is assuredly the Sergio Leone of horror cinema.

“I was not prepared for how beautiful the film would ultimately look. And who knew how important [it] would be?”

Suzy is slowly drawn along by vestiges and crumbs of obscure and esoteric adumbration, flashing with gnashing fangs at unspeakable horrors hidden in the artful shadows of the Tanz Dance Academy.

Argento’s pet motif of idle men overshadowed by threatening women was carried over from his preceding work as well, exemplified with gusto from the likes of Alida Valli, who displays an unyielding viciousness as Miss Tanner, one of Suzy’s dubious instructors.

“Now, if you look at a movie like Suspiria — that was done in imbibition, a technique by which you could control the colors separately. There were only a couple of labs in the world that could do that. One was in Rome. If you look at the color of that movie, it’s unbelievable. Oh, man. It was all planned out beautifully.”

Rarely has such an overwhelming sensory experience been wed to celluloid with such effectiveness and execution. The monstrously grisly Grimm fairytale leitmotif is designedly drawn in theoretical primary colors, like a psychotic storybook, tiptoeing a delicate line intervening arthouse and exploitation.

The ballet academy seems to roar with a crimson cruor, throbbing and thruming with vivid fuchsia, blood red flame, and a rosy blush. Lurid, larger than life, and alarming, Michelangelo Antonioni’s former cinematographer Luciano Tovoli (The Passenger) lenses more than his allotment of arresting and eye-popping imagery and it’s all bumped into the stratosphere when combined with the driving and unabated musical score by prog rock legends Goblin.

Having previously worked with Argento scoring Deep Red, their overpowering and unbending work in Suspiria easily amounts to one of the most effective and unforgettable soundtracks of the genre, reaching near-hysterical heights and plumbing pitch-dark yet fist-pumping depths as well.

A more elaborate, otherworldly, and identifiable score as Goblin’s for Suspiria possibly does not exist, though they would collaborate with Argento several more times, most notably with their driving, synth-soaked chef-d’oeuvre for Tenebre (1982). Though truly, as any Goblin fan knows, all of their partnerings with Argento reaped great rewards –– 1985’s heavy metal-obsessed Phenomena is another hallmark –– as did their recognized work on George Romero’s Dawn of the Dead (1978).

“Thunderstorms and extraordinarily grotesque murders pile up as Argento happily abandons plot mechanics to provide a bravura display of his technical skill. With his sharp eye for the bizarre and for vulgar over-decoration, it’s always fascinating to watch; the thrills and s are so classy and fast that the movie becomes in effect what horror movies seemed like when you were too young to get in to see them.” 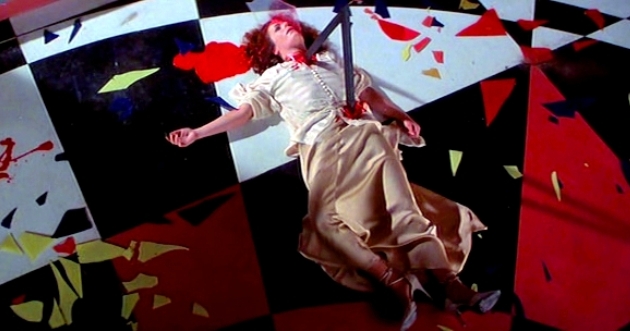 The first of a floating trilogy Argento cites as “The Three Mothers” (1980’s Inferno and 2007’s The Mother of Tears complete the triptych), Suspiria’s audacious innovation has yet to be matched and it’s unlikely that the Luca Guadagnino (I am Love) 2017 remake with Tilda Swinton will show it the door.

Argento has even come out in opposition to Guadagnino’s remake, quipping; “Either you do it exactly the same way — in which case, it’s not a remake, it’s a copy, which is pointless — or, you change things and make another movie. In that case, why call it Suspiria?”

Suspiria succeeds both as a hypnotic horror film and as compelling proof of auteur theory. It’s a film ripe with all manner of moral conflicts, informed of self-reflexive discourse it still maintains a glistening and grotesque sheen that is unlikely to ever pale or give ground.