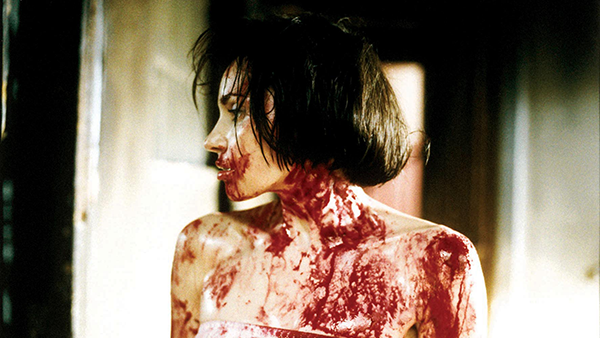 “Film is a transition between passivity and point of view.”

Blood on the tracks

An anonymous man and woman sit in an automobile underneath a purple bruise of night sky, groping together, they share a sustained, innocent, and delicate kiss.

Not surprisingly, few films connect sexual craving and appetite with that for human flesh as brazenly and slyly as Denis does, devouring recognizable horror film motifs with a ravenous and formative hunger.

Denis, whose previous film two years before, Beau Travail (rightly and widely considered an unmitigated masterpiece), had the world’s attention awaiting her next cinematic manoeuvre.

Perhaps it was these weighty intentions and skyscraping expectations that had critics so divided, initially, and unfairly correlating Trouble Every Day as another shock-fest akin to the New French Extremity (think Gaspar Noé’s unforgivable Irréversible).

But, as BAMcinématek puts it, during their recent Claire Denis retrospective in Brooklyn last summer; “…[Denis’] elliptical and polarizing film maudit is a heady and haunting exploration of desire taken to its disturbing extreme… Trouble Every Day is ripe for reappraisal.”

I admit to much reluctance and hesitancy in seeing this film, having waited over a decade after it’s release to finally get to viewing it and thusly succumbing to it’s dark beauty and barbarous grace.

“What one is left with, even after the most awful acts are committed, is an overwhelming sadness that feels as if it has made its way into your very bloodstream.” 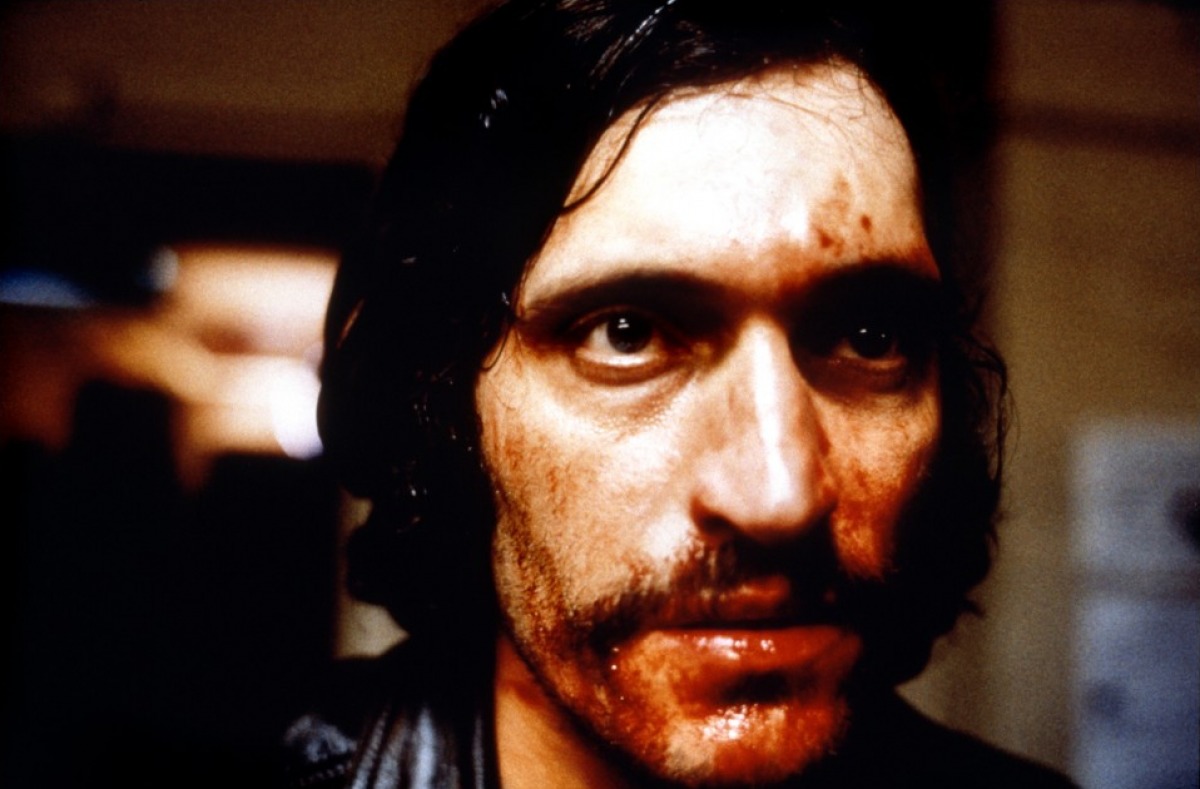 Trouble Every Day (whose title is taken from a song on Frank Zappa’s Freak Out! LP) tells the ill-fated contretemps of two couples in Paris. One couple are American newly weds honeymooning in La Ville -Lumière; Shane Brown (a fully engrossed Vincent Gallo) and his delicate new bride, June Brown (a bright-eyed and valiant Tricia Vessey).

Equidistant to Shane and June, in ways soon but slow to be revealed, are Léo, a doctor (Alex Descas, excellent) and his ravishing, supremely unsettled wife, Coré (alluring Denis linchpin Béatrice Dalle).

In dextrous and fragmentary fashion we learn that Shane, unbeknownst to June, is studiously pursuing Léo and Coré, whose pasts are interlaced.

Their previous work, involving scientific field research and a tropical virus, intensified and mutated in a laboratory with unrealized obeah-like vampiric predication, which causes increased libido making sexual hunger and hunger for human flesh indivisible, leaving Coré a bloodlusting shadow of her former self.

Léo, desperate to save his wife, keeps her prisoner while his delusory search to cure her leads to dead ends, and all the while Coré, escapes time and again, to uncontrollably quench her longing and her thirst. Each time Léo finds her, he returns her to their fortified home, washes the blood from her, and then disposes of whatever might remain of her quarry.

Shane is similarly suffering, though he’s yet to succumb to his carnal anathema, for fear that he will lose control. He fears also intimacy with June, not wanting to ravage her, he has a reoccuring dream of her, blood-drenched and coquettish; a premonition, perhaps, of their impending circumstance suggesting his inevitable terrible path. June is often seen in virginal white, her purity and incorruption a haughty genuflection to Shane’s hidden despair.

“[Trouble Every Day] is the kind of public self-exorcism a director can only get away with once in a career. And even at its most overdetermined, it still reflects its maker’s signature love for intractable contrasts and unresolved ambiguities.”

Love is to die 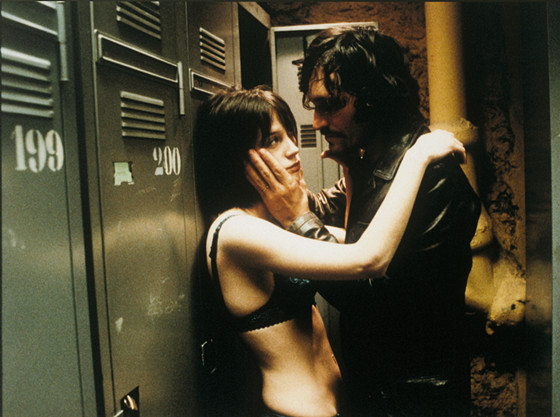 In one of Trouble Every Day’s most quiet yet excited moments Shane watches June bathe, he’s part protector and part pariah, with potentially terrible intent. Deeply pained, Shane’s suffering, at this point not fully understood, is still heartrending—Gallo is terrific in this role—and equivocal. June, whose been dozing in her cozy tub, awakens and is rightly spooked to see Shane standing over her. He leans down, tenderly touching her, he asks: “Are you frightened?”

On another occasion previously, after seeing her bloodied, bested body in a nightmare, he whispers: “I’d never hurt you.” It’s moments like these where the Gothic atmosphere of dread and downfall inundates and overpowers with a pensive poetry.

Another place Denis dumbfounds is in her authentic re-appropriation of familiar horror film simulacrum. Shane and June, seeing the sights in Paris, visit a cathedral where Shane feigns the physical menace of Frankenstein’s monster, moaning and moving like the abomination he himself is inclined to become.

A sequence with fire later on wryly reminds us of this prank, as does his actions later in the film when he adopts a puppy (not unlike Boris Karloff cavorting with a cherubic child to offset his hideousness).

“If you have a tendency to be a day-dreamer and to gaze at things and fill a blank with music – you know I do the same with sound.”

The connotative cinematography from Agnès Godard (another Denis constant) is a stunningly textured and lowly-lit affair that creeps up on you, like the lovelorn malcontents that inhabit this ill-starred adventure.

The original score by the British chamber pop indie rock outfit the Tindersticks (again, a frequent collaborator of Denis’), manages to be sensual and serene, capturing the spiritual edginess and existential dread at the crux of this modern horror.

Watching Trouble Every Day isn’t always easy. The porcelain-skinned and all-too-tender Christelle (a lithe Florence Loiret), a maid at the hotel where Shane and June are staying, is singled out early on as a victim.

A few beautifully lensed and eerily voyeuristic sequences establishes her lot, foreshadowing her gaunt future but making it no less harrowing or horrific. In fact, all the deaths that occur in the film are racking and intense, the pain of the victims as luminous as the turn from seduction to slaughter.

It’s not inessential to the story, or done merely to give trauma to the viewer (other films in the New French Extremity laud such nihilism, but not here), and truly, such genre films rarely afford such style and ability. It might resemble splatter films in it’s offering, but never in it’s presentation.

In implementing the romantic rhythms and dactylic tones of her more artful and “important” films (such as the aforementioned Beau Travail, and her astounding debut Chocolat), Denis has devised an atypical horror film with equal parts tenderness and terror. The forbidden fruit of an artist unafraid, Trouble Every Day teems with ill-lit treasures and lasting alarms.