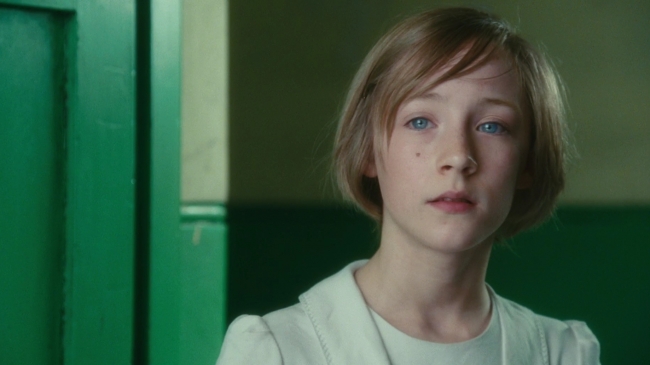 This beautiful Joe Wright WW1 drama follows the story of lovers Robbie Turner (James McEvoy) and Cecilia Tallis (Ciara Knightly), whose lives are thrown off course due to the unfortunate misunderstanding of younger sister Briony Tallis (Saoirse Ronan) who falsely accuses Robbie of committing a crime.

The repercussions of this accusation separates the couple and follows the life of Robbie as he enlists to fight the war to end his prison sentence whilst Cecilia volunteers as a Nurse to help the war effort.

When we reach the end of the film we discover that what we have been watching was the retelling of the story through the eyes of a much older and remorseful Briony, who in fact had changed the reality of what actually unfolded in the years following the accusation into fiction, to allow her sister and Robbie to have the happy ending they always hoped for.

Throughout the film, the excellent sound design delivers clues sonically to the audience that suggest that the story might not be as it seems, mainly by form of the sound of a typewriter – the author’s tool. A key element of the score and dramatic plot itself, the film opens with the sound of someone using a typewriter, which is revealed to be a young 13 year old Briony finishing a play.

Interestingly however, as Briony rushes through the house to announce the completion of her play, the typewriter becomes a non digetic sound and integrates itself as a prominent feature of the musical scoring. This musical infusion of scoring and typewriter sound appears throughout the film sparsely, but always during peak moments in the story.

Again, this musically integrated typewriter sound can be heard during Briony’s false confession to the police, and again when we are brought back into the world of Briony as a young woman nursing during the war. These sonic additions add to the twist of the film, and can be interpreted as sonic clues that add another layer of drama to the audience; acting as sonic reminder that we are in fact witnessing the telling of Briony’s fictional novel as opposed to the actual documentation of events.

Of course this can only be interpreted as such upon second viewing of the film, but once the reveal at the end is known, it becomes apparent that the inclusion of the sound of the typewriter has quite an important role in the story, as opposed to simply being aesthetic.

Alejandro G. Iñárritu’s 2014 story of a failed actors attempt to reinvent himself is a beautifully shot film, with an edgy and frantic feel about the cinematography and soundtrack throughout. Consisting of a soundtrack primarily performed on drums, the music adds to a schizophrenic performance by Michael Keaton. However, one scene in the film employs the use of an excerpt of Symphony No. 2 in E minor Op. 27 by Sergei Rachmaninoff.

This scene is very interesting sonically as the film really come out of the world of realism realm of scene which is not in tone with the rest of the movie. In this scene Riggan Thompson (Keaton) leaps off a building which has strong undertones of a suicidal attempt, but instead of falling flies through the air imitating his only role that he became famous for, the Birdman.

Before he takes the leap, Riggan says the word “Music”, which cues the start of the Rachmaninoff. Already this gives the scene an element of fantasy, surrealism and allows us to understand that we are now in the characters universe.

The Symphony used for this scene is uplifting, empowering and follows the journey of Riggan as he flies through the city, eventually landing outside the theatre where he points at an usher and asks him to “Stop the music”, which again cues an abrupt stop of the Symphony.

What is interesting here is the usher’s reaction to this is one of confusion, which suggests the viewer that this entire sequence was a fantasy, dream sequence that Riggan imagined in his head. Furthermore to suggest this, as Riggan enters the theatre a taxi driver who drove him to the theatre follows him demanding his fair.

This is important within the context of this scene, as it alludes to the mental state that the character is currently in at this point of the movie. From the outset of the film it is clear that Riggan suffers from some schizophrenic tendencies, and this event at this section of the story alludes to the idea that his mental state has deteriorated substantially since the start of the film.

Again as in Pi (1998) this could be defined as a meta digetic sound that allows us into the world of the character, allowing us to see from their perspective which in this case is one of mental instability and delusion.

A subtle but incredibly useful approach that is a great example of music being used as a tool to enhance the dramatic element in a way that the visual medium could not achieve on its own.

Steven Spielberg’s 1975’s shark thriller is a classic example of a film that utilises music and sound to enhance the drama for the audience. Possibly one of the most well-known musical motifs of all time, John Williams two note shark motif has become as infamous as the film itself.

The technique employed by Williams is called a leitmotif, where a specific musical phrase is designated to a specific character. The history of the use of leitmotif’s goes back to the operas of Richard Wagner, who was the first composer to conceive the idea and designate specific musical motif’s to represent characters. Early film composers such as Max Steiner started integrating the technique into their work in film and its popularity grew from there.

What is great about the use of leitmotif is that the character in question can be suggested by the music without having to appear on screen. This gives the director the opportunity to suggest the presence of the character, or even insinuate the characters involvement in an event without the character being visually present.

In the case of Jaws, Spielberg and Williams more often than not use the leitmotif to great effect, to the extent that the foreboding music is almost as much of a character as the actual shark itself. The nature of the music suggests the presence of a hunter, quickening pace as it closes in on its prey which t times in the film is all that is needed to portray the terrifying lead up to a shark attack.

One such scene occurs 25 mins into the film, where a fisherman falls into the water due to the shark dislodging a part of the pier he is standing on. While we do not see the shark in the following frenzied attempts of the fisherman to escape from the water, the music suggests the frantic and frightening presence of the shark who is getting closer to the potential victim.

Fortunately, he escapes unharmed, but this scene executes the power of the leitmotif flawlessly, creating a sense of the shark hunting down its victim without the shark being visually present.

This scene artfully uses the idea of the leitmotif to suggest a character of the film without having to show the character onscreen. The sonic representation of the character is as strong as a visual shot, and in this case particularly the music moves in such a way that suggests a victim being hunter by a predator, which ultimately succeeds in achieving a frightening scene using only a musical reference to the character.

Christian Bale’s stellar performance as Patrick Bateman in Mary’s Harron’s American Psycho is a fascinating look into the mindset of a serial killer. Shot with a dark sense of humour, the film is an interesting twist one the traditional serial killer style film. The following scene is a perfect example of this dark humour, and use of music to carry this black humour across.

The scene in question is the famous Huey Lewis and the News murder scene where Bateman invites Paul Allen (Jared Leto) back to his apartment for a quick drink with side of murder.

In the lead up to the killing, Bateman talks in great depth to Paul about his love of Huey Lewis and the News, eventually putting on his personal favourite track ‘You don’t have to be hip to be a square’ through his sound system. Suddenly, he attacks a drunken Paul with an axe, chopping away at his body while the upbeat sounding music continues to play.

Quite a famous scene due to its use of that particular song, the music brings a certain irony and satirical feel to what could have otherwise been a horrific and sadistic scene. Think about it, if Bateman had killed Allen to the soundtrack of Bernard Herrmann’s strings from Psycho’s shower murder, this scene would have a completely different feel and impact on the viewer. Instead it provokes feelings of unease and a sensory confusion.

While the viewer’s ears are being treated to a funky and upbeat song that one would associate with feelings of joy and happiness, their eyes are witnessing a horrifically brutal and aggressive act being committed onto a human being.

This creates a juxtaposition between the visual and the aural, which challenges the viewer’s interpretation and emotional response to the scene. Ultimately, it makes for a much more memorable and stand out scene that defies the expectant norms usually associated with scenes of brutal murder.

Author Bio: Joey Ryan currently resides in Cork city, Ireland. He is a recent graduate of a Masters in Music and Cultural History degree and has a keen interest in the relationship between sound and the visual.