Malick’s next film, The New World, is one of his lowest rated to date. Why? Well, most see it as a tale of the English forays into America and a dull love triangle between Pocahontas (Q’orianka Kilcher), Captain Smith (Colin Farrell), and John Rolfe (Christian Bale).

The film however is about much more than that, and marks an even further departure from a plot driven tale for Malick. From this film on, his films use plot sparingly and change focus, they use plot only to create situational opportunities to advance his themes and meanings (this is most especially true of To the Wonder, though to be really fair, all of his films are still more plot driven that his critics try to claim).

The New World is a film more concerned about souls (particularly Pocahontas’), a loss of innocence, and is another rendition of being cast out of the Garden of Eden.

In The Thin Red Line, we see Private Witt long for his Melanesian second home, where he has been AWOL. Pocahontas’ longing is inverted, as she looks back to her actual home, a land free of corruption and idealic in most senses, from the cursed shores of the British Isles.

As in The Thin Red Line, we see the harm the English colony brings on the natives, as even innocent children become victims of the English quests for greed and conquest (this is eerily parallel to the sores we see on the backs of the Melanesian children after war reaches their fair island).

This loss of innocence and ejection from Edenic America happens because of the so-called American dream of riches and fame (speaking here of its historical roots and not its modern meanings), a dream which is unattainable. As we see, Pocahontas asks “did you find your Indies, John? You shall”, to which he responds “I may have sailed past them.”

The dream the English are chasing does not exist. Now, after spending the better parts of their lives searching for it, both John, Captain Smith, and Pocahontas find themselves separated by time and space from their physical and spiritual homes, never to return. 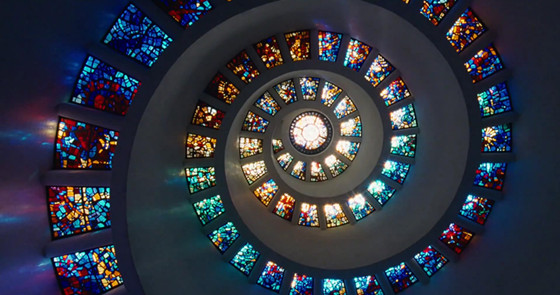 Winner of that ever illustrious palm d’or (which Days of Heaven was nominated for), The Tree of Life is undoubtedly the best film Malick has released to date, and I would even place it as possibly the best film released by any director of all time.

It begins a chronological trilogy of autobiographical films, and we see the struggles Malick dealt with that probably led him to study Heidegger and existentialism, as well as to reaffirm his faith.

The film follows Jack (Hunter McCracken and later Sean Penn) as he tries to cope with his younger brother’s untimely teenage death. As Jack looks to his mother for support, he begins to understand how his existence can have meaning in the face of everything else.

The film opens with a quote from the book of Job: Where were you when I laid the foundations of the Earth, when the morning stars sang together, and all the sons of God shouted for joy?” Job 38:4,7. We see Jack’s mother, Mrs. O’Brien and Jack question everyone and everything as they try to comprehend and contextualize their loss.

Mrs. O’Brien finds solace in grace, and trusts that God’s plan is perfect and thus that the loss of her child was necessary. Jack, however, does not succumb as gracefully, and tends rather towards what the film characterizes “the way of nature”. He thinks, as his father has taught him, that you can’t get ahead in the world and be good.

Like many other characters in Malick’s films, Jack and his father are obsessed with leaving their mark on the world. Mr. O’Brien (Brad Pitt) says:

I wanted to be loved because I was great; A big man. I’m nothing. Look at the glory around us; trees, birds. I lived in shame. I dishonored it all, and didn’t notice the glory. I’m a foolish man.

Again and again Malick shows us that seeking worldly glory isn’t the way to find meaning. True meaning, and therefore true authentic Being, comes from accepting our fates and mortality and, instead of fighting against it by heroic deeds and praiseworthy acts, by living for one another and loving everyone.

Malick’s last film (at least, last to be released in America and in truth a limited release there) To the Wonder is again at least somewhat autobiographical.

It follows Neil (Ben Affleck) through a series of torn relationships with two women and God. Neil, we learn, cannot commit himself fully to his faith, and struggles with different vices and anger. He contrasts well with Father Quintana (Javier Bardem), a priest struggling at times to feel as if he is making a difference, but nonetheless a faithful man hoping to help those around him love one another.

The root of many of Neil’s problems in the film is actually birth control, which Malick clearly takes to be a vice and an inhibitor of love. Birth control in the film leads to dishonesty, envy, and adultery. However, what Malick is trying to say is actually a bit bigger than just church teaching on contraception.

Father Quintana struggles to interact with others at times because it seems there is something between him and those around him (often prostitutes, inmates, or just parishioners in his church), though he continually places himself in situations to help others with their struggles. Near the end though, we hear his prayer, which is the solution to this problem. He says (translated):

The solution thus is calling on God to surround him and to be the medium through which he can love others. Neil, on the other hand, is never interested in such a thing, and is often trying to set up barriers between himself and others, most obviously contraceptive barriers.

This is to say, for Malick we must fully commit to others, to interacting with them, to joining in the act of creation with those we love, and to sharing in their spiritual burdens. This is no easy task, as both Neil and Father Quintana prove, but it is worthwhile, perhaps even the most worthwhile thing we can ever do.