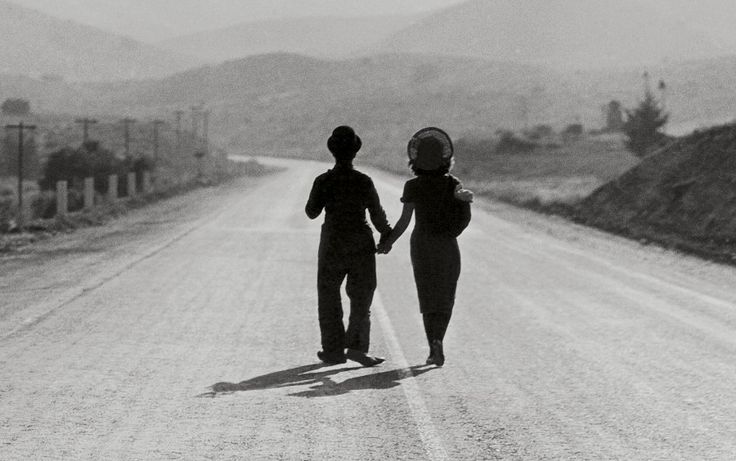 The landmark 1987 book Cultural Literacy by E.D. Hirsh argued that people should have a comfortable degree of knowledge concerning aspects of general culture which help to enrich and broaden the minds and lives of those who process that knowledge. There are many facets of culture which inform a person’s life and, in the modern world, film is one which cannot be ignored.

People with a substantial base of reference points to culture high and low must also include the visual literacy which movies, the dominant new art form of the 20th and early 21st centuries, provide. Everyone has been exposed to film to some degree but how many have a knowledge of the history and milestones of this commanding medium? If younger people are introduced to literature, music, fine arts, dance and other forms, then why should film be ignored?

A word to more mature individuals seeking to introduce younger ones to film: seek pictures which still have a pulse, a life force which shows a connection to life as it is still known, despite differences in fads and fashions. Don’t expect younger people to love something simply because it was popular in your youth, you loved it, or it conjures sentimental memories of another era.

For younger viewers searching on their own: try and find films which speak to you in some way and, not that you probably won’t anyway, don’t trust established views telling you what you should and shouldn’t think is good, including this by no means definitive nor complete list.

Silents are a unique medium combining pantomime and fluent visuals and only lasted in the world’s history for only about thirty years. Though remarkable images of this era still contribute to film’s chronology, perhaps the most lasting contribution this time produced was the stunning and universal comedies which then flowered.

Of the many greats of that day, perhaps the greatest, and most modern, was Buster Keaton. Dubbed “the great stone face” due to the fact that not only did no obstacle ever defeat him but he never broke a sweat or showed any great emotion, he was also a superb athlete and he and his characters were always masters of all things mechanical.

Though almost every Keaton film has its proponents, the surreal, innovative Sherlock, Jr., tellingly quite short for a feature film is a great introduction. The plot has a small-town movie projectionist being framed by a romantic rival for stealing the watch of his girl friend’s father and dejectedly falling asleep in the projection booth and entering the world of the film being shown, where he is the great detective Sherlock, Jr. The plot is second to the highly creative cinematic world of the dream state, an influence on surrealist ever since.

Competing with comedy during the silent years were rousing adventure films and none were more incendiary than the works of the saucy, super athletic Douglas Fairbanks.

Though he was Robin Hood, Zorro, and D’Artagnan, his finest hour (though somewhat after the actual fact) was in this quite expensive and sumptuous fantasy-adventure film which is the epitome of art-Nuevo design and the picture which really started the fantasy film genre in Hollywood to a great degree.

However, for all its virtues, it might be little more than a pretty still-life but for the ultra-infectious Fairbanks, if not a great actor as such, then surely one of the first great stars, here as the title character, experiencing a variety of magical exploits for love a beautiful princess.

During the actual era, Keaton was surpassed in the public’s affections by Charles Chaplin (more later) and Harold Lloyd. Largely due to the fact that his work was shrewdly kept out of circulation (and then triumphantly returned), many have mistakenly reduced Lloyd to a lesser place.

However, his eager go-getting young man character, determined to get ahead by doing whatever it takes, surely speaks to younger viewers today. It doesn’t hurt that, like Keaton and Fairbanks (Chaplin, too), Lloyd was in peak physical condition and could pull off amazing gags/stunts.

Though several films could be considered his best, the best remembered is the thrill comedy Safety Last. His eager beaver alter-ego somehow has his hopes for business advancement tied to climbing up the outside of a tall building, which he plans to fake with an expert double.

However, things work out so that he himself must go up the building with each floor presenting another, ever more hair-raising, comic peril. The image of Lloyd hanging from a dangling clock in this film is one of the most famous in film history.

Perhaps silent dramas on the whole would look overstated (to put it mildly) to modern and young eyes. However, just before the silent days ended, many Europeans arrived bringing sophisticated ideas and techniques, making the end of the silent time its best moment. Chief among these artists was F.W. Murnau, a leading director of the German film industry, surely the finest outside of Hollywood itself.

With a large budget and gifted with resources unavailable in Europe, he created a deceptively simple, universal film about a young farmer almost lured into killing his devotedly innocent wife by a temptress from the city.

The emotional storyline was quite strong but the stunning images and advanced camera methods were what made this picture one of the prime visual splendors in film history. 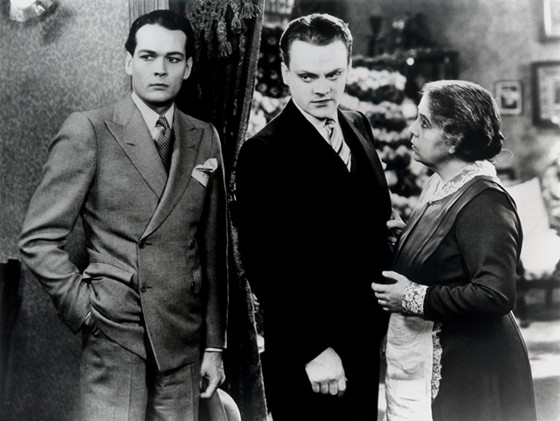 At its best, film can honestly reflect the history of times in which those products are created. Before the crack-down of censorship in 1934, Hollywood was doing a great job of depicting the turbulent, chaotic era of the Great Depression, which saw many struggling just to keep going. A distressing phenomenon was the rise of the gangster, mostly young urban men who turn to lives of crime in a tough era, often selling dangerous, badly made liquor, which was illegal in any form at the time.

One of the best was The Public Enemy, in which a punkish little guy from a bad section of town forsook school and legitimate employment to live the high life off ill gotten gains. Starring the wonderful fire-brand actor James Cagney (who did come from a similar background), his Tom Powers could easily be changed from a 30s gangster to a 21st century gansta with little adjustment.

Another cinematic symptom of bad times was the rise of the horror film, which had barely existed before that time. To younger viewers used to very visceral horror films, vintage ones with monsters created in the make-up room and living somewhere in middle Europe long ago, may seem quaint indeed. However, one such film is quite different.

Director Todd Browning had run away from home to join the carnival and had never forgotten that closed off and highly eccentric world. He and kindred spirit actor Lon Chaney often displayed sympathy for the malformed and different in their several films but Browning’s crowning achievement (made after Chaney’s death) was this story about a society of circus sideshow performers taking a grim revenge on the “normal” people who sought to take advantage of one of their own.

The potent ingredient was that the circus performers were real and remained “monsters” after Browning called, “cut”. Freaks may be a horror film but its heart is with the monsters. 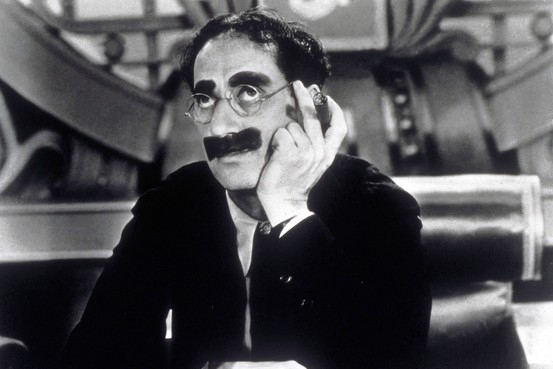 Though silent comedy might be more universal, comedy in the early talkie era was blessed with a variety of wonderful and unique vaudeville performers who found sound more suitable to their style than silence.

Perhaps none have endured more in the public’s memory than the Marx Brothers. Long big in vaudeville and then lately striking it huge on Broadway, the brothers used any kind of low comedy, puns, slapstick, non-sequiters, name it, to get a laugh.

Groucho, the verbal one, had a painted on moustache and was the eternal shyster (though one always somehow rooted for him) while Harpo was mute (on stage), wore a surreal ultra-curly wig (pink on stage) and seemed to live in a delightful world with logic of its own while Chico, who pretended to be Italian, was an able foil for both. (There was also, for a while, brother Zeppo, for reasons best known to his family.)

Though not a hit at the time, Duck Soup, which sees Groucho improbably elected president (no comment) of a small country and leading it into the craziest war of all time, was their best under the able direction of master comedy maker Leo McCarey. It’s small wonder that the irreverent youth of the 1960s took on the brothers and this film as their own.

While older horror films may be dicey today, their last great bow is a different story. Director James Whale, a profound and quirky gay artist, was a film maker like no other and did not want to make a sequel to his famous hit Frankenstein (1931). However, once coerced, he employed a number of other gay artists (not all of the contributors, but enough) to create a film as subversively funny as scary.

The story has the monster (an iconic Boris Karloff) resurrected after what looked to be a certain death and falling in with a waspishly effeminate mad doctor (Earnest Thesinger), who forces the creature’s anguished creator (Colin Clive) to help make the poor thing a mate…with most unexpected results.

The film is quite knowing, pictorial, hilarious, sometimes oddly touching, and informed with a sensibility that many would not admit to detecting for decades after its release. Also, Elsa Lanchester, who also plays Frankenstein author Mary Shelley, is one of the cinema’s great characters in her brief appearance as the mate.