There might not be a film that better encapsulates the spirit of Bruce Springsteen than Cimino’s epic Best Picture winner about the impact of the Vietnam War on the lives of a group of friends from a Pennsylvania steel town.

The film begins with images of men that populate many Springsteen songs – steel workers that would be right at home in 1978’s “Factory”, from that year’s Darkness on the Edge of Town, and the same year of release as The Deer Hunter. With extensive focus on the inner lives of the characters in the film, it’s as though Cimino anticipates the people who would reappear in many of Springsteen’s later work, including many of the tracks from 1980’s The River and especially 1984’s Born in the USA.

Two key scenes especially illustrate the themes that Springsteen explores on these albums, and most closely as they relate to his use of veterans as characters. Michael (Robert DeNiro) returns from Vietnam to find his friends have gathered to throw him a welcome home party. He arrives, stands outside, and can’t go in. He heads to a motel instead, completely unable to face the unwanted attention.

The film’s finale, as well, as the characters gather for a funeral of one of their own, seems to encapsulate Springsteen’s complicated patriotism – for Bruce, to love one’s country is not incompatible with criticizing it sharply. Cimino achieves this same effect, as the absurdity of the Vietnam War and all that these friends have lost culminates in them singing “God Bless America.”

The effect is one that is simultaneously sincere and ironic – the characters mean it as they sing, but they also recognize what their country has taken away from them, as they mourn their fallen friend.

As with many other Springsteen songs, this film features a Vietnam veteran turning to crime after returning home from the war. This time, it’s John Converse (Michael Moriarty) teaming up with war buddy Ray Hicks (Nick Nolte) to smuggle Vietnamese heroin into the United States for their own profit.

Though the film takes its name from the song by Creedence Clearwater Revival (a song intermittently covered in concert by Springsteen himself, incidentally), it’s the spirit of Bruce’s music that hangs over the movie, as the desperation of the veterans to adjust to stateside life takes center stage.

While the plan is Converse’s, this movie is really about the difficulty of Hicks’s return to the civilian world. Hicks behaves inappropriately throughout the film, and seems to be caught between the memory of life in Vietnam during the war and a desire to leave it behind. Ultimately, he’s unable to, as he goes on the run from drug enforcers pursuing him and Converse’s wife Marge (Tuesday Weld). While on the run, he seems to relish the exhilaration of being back in something like combat.

The protagonists of Springsteen songs like “Born in the USA” and the rare track “Shut Out The Light” find themselves in similar situations as Hicks – unable to truly leave the war behind, they bring it home with them and remain men out of place in a world that no longer seems to have a place for them.

This adaptation of the novel by John Steinbeck is a surprisingly forthright criticism of conditions for workers in the 1930s. While the themes of both the novel and the film would alone be enough to place this in analogue with Springsteen’s artistic concerns (working class life, the unfairness of the economic system, injustice), his 1995 album The Ghost of Tom Joad coalesces the themes of The Grapes of Wrath into a late twentieth century examination of the ways things have changed, or haven’t, since Tom’s fictional journey.

The title track of the album tells stories of migration (though set in ostensibly modern times) to the west, and contains images of “families sleeping in their cars in the southwest” and “hot soup on a campfire under the bridge.” The migrants in Springsteen’s song are searching for “The Ghost of Tom Joad,” and the final verse recalls and adapts Tom’s famous “I’ll be there” speech from the end of both the novel and the film.

The sparse, acoustic feel of the song matches the dark, shadowed lighting of the film, used to great effect by Ford to create a haunted, ghostlike feeling of his own. The novel, the film, and the song (and the album as a whole) are about ghosts in their own way, and Tom’s spirit is meant to live on in the actions of those “fighting for a place to stand,” in Springsteen’s formulation. 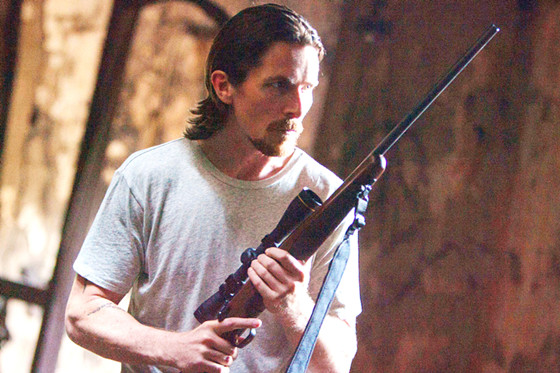 The locations Scott Cooper uses in this dark Appalachian noir are tremendously evocative; there are decaying streets, homes fallen into disrepair, and most strikingly, an empty steel mill that serves as a location for amateur boxing matches.

The hollowed out steel town at the center of the film is a consequence of the globalizing world, something that Springsteen has chronicled deeply throughout his career. One such track, “Youngstown,” from 1995’s The Ghost of Tom Joad, illustrates the decay of the steel industry that had such devastating effects on the entire Rust Belt, including the setting of this film, in southern Pennsylvania and western New Jersey.

In fact, it’s not hard to imagine the characters not only of Springsteen’s music, but also of The Deer Hunter, being cut adrift by the decline of manufacturing in the area. The film’s climax takes place in the abandoned mill, as Christian Bale’s Russell stalks Woody Harrelson’s Harlan De Grot through the ruins of what might have been, had the industry stayed.

The working class anger that runs deeply through this film is an echo of Springsteen’s perspective in “Youngstown,” as the steel worker laments his plight: “When I die I don’t want no part of heaven / I would not do heaven’s work well / I pray the devil comes and takes me / To stand in the fiery furnaces of hell.” The final moments of Out of the Furnace point to similar fatalism on the part of its main characters.

As the first major film production to be shot in New York City after the events of September 11th, 2001, Spike Lee takes David Benioff’s novel and adds an elegiac, haunting tone that incorporates the aftermath of 9/11 into the story. The basic plot of the film focuses on Montgomery Brogan (Edward Norton), a drug dealer on his way to prison for seven years the following morning. Brogan wants one last night with his friends, his girlfriend, his father, and the city that he calls home.

Lee’s decision to address 9/11’s effect on the city as a backdrop for the city helps us recognize the fear and uncertainty that New Yorkers felt during that time, and compares it directly to the difficulty that Monty will face in prison.

Lee closes the film with Springsteen’s “The Fuse,” a track from his 2002 album The Rising, much of which was written in response to 9/11 as well. Songs from the album like “Empty Sky” and “Lonesome Day” evoke the complex range of emotions at work in post-9/11 New York; similarly, Lee’s film opens with a ghostly credits sequence set inside the towers of light that shone into the night sky to commemorate the missing towers.

Much of both The Rising and 25th Hour are about absence – for Monty, it’s his impending departure for prison, and on Springsteen’s album it’s the people who were lost, either physically (such as on “Into the Fire,” which commemorates first responders) or emotionally (“The Fuse”) in the wake of the attacks. Together, Lee’s film and Springsteen’s album had the first major word on 9/11 for cinema and music respectively.

Ryan Coogler’s directorial debut chronicles the real-life story of Oscar Grant (played in the film by Michael B. Jordan), a young African-American man shot by a transit police officer in Oakland, CA on New Year’s Eve, 2008. The film was released amidst a series of similar high profile incidents that called national media attention to the relationship between police officers and young African-American men.

One of the first new songs Springsteen performed live after reuniting the E Street Band in 2000 was “American Skin (41 Shots)”, which was written about Amadou Diallo, a young black immigrant killed in New York City after he was mistaken for a rape suspect by four police officers, who fired at him forty-one times. Springsteen premiered the song at Madison Square Garden, amid police protests, and has periodically reprised it in concert – most recently on the Wrecking Ball tour in 2012, in the aftermath of the killing of Trayvon Martin in Florida by a neighborhood watchman.

The song’s structure relies heavily on the repetition of “forty-one shots” to emphasize the absurdity of the amount of bullets fired at Diallo, but also contains verses that explore the perspectives of the police officers who pulled the triggers and an African-American mother giving her son instructions on how to behave around police. The increase in profile of these incidents led Springsteen to finally record the song for his 2014 album High Hopes, with a guitar solo by Rage Against the Machine member Tom Morello.

The film Fruitvale Station encapsulates a similar outrage that Grant’s life would be taken, but also works to create tremendous empathy for the characters (including Grant’s family members). Each – “American Skin” and Fruitvale Station – acts as a representative example of what both Springsteen and Coogler see as a larger problem beyond the individual circumstance their works present.

Adam McKay’s satirical exploration of the circumstances that caused the economic crash of 2008 is primarily marked by two key tonal characteristics – disbelief at the absurdity of the behavior of its characters and cynical outrage at the lack of scruples on display.

McKay is just the latest to express outrage at Wall Street bankers – Springsteen’s 2012 album Wrecking Ball is primarily a protest album about the crash and what he sees as a lack of accountability for those bankers. Both the film and the album stress the point that no Wall Street banker went to prison on account of the actions that led to the crash.

Springsteen’s album harnesses a similar tone to The Big Short, as his goal is primarily to create hard charging anthems that motivate outrage on the part of the listener. Repurposing a title from his 1984 closer to Born in the USA, “My Hometown” (a wistful elegy for a hollowed out town abandoned by its factories), 2012’s Wrecking Ball gives us “Death to My Hometown,” an Irish rocker that criticizes “the greedy thieves who came around / And ate the flesh of everything they found / Whose crimes have gone unpunished now / Who walk the streets as free men now.”